For anyone fighting against the rise of misinformation, sensationalism, and biased news, Ground News Pro will help you easily compare how a story is being covered by thousands of sources from across the political spectrum and from around the world. If you are like the many people who feel overwhelmed and under-informed as they piece together patchwork information from social media and conflicting news sources, Ground News Pro will empower you with an array of visualization and comparison tools that makes it simple to analyze, understand, and draw your own conclusions about a developing news story. Unlike traditional news aggregators, which utilize crowd-sourcing and algorithms that reward clickbait and reinforce pre-existing bias, Ground News Pro helps users understand the news objectively based on media bias, geographic location, and time. Launching two weeks before the first votes are cast in the U.S. presidential race, Ground News Pro is the world’s first news comparison platform that will help voters make better informed decisions, drawing from more than 40,000 news sources worldwide and featuring an average of 30,000 news stories per day. Ground News Pro is not only where you want to get your news and where you want your neighbor to get their news. About Ground News Pro subscription memberships purchased within the Ground News app: • Membership subscription renews monthly, and you'll be able to manage this subscription in your App Store account under the 'Ground News' subscription • Payment will be charged to your App Store Account on confirmation of purchase • Your membership subscription automatically renews unless auto-renew is turned off at least 24-hours before the end of the current period • Your account will be charged for renewal within 24-hours prior to the end of the current period • Membership subscriptions can be managed and auto-renewal may be turned off by going to your Account Settings after purchase See full terms and conditions here: https://ground.news/terms-and-conditions 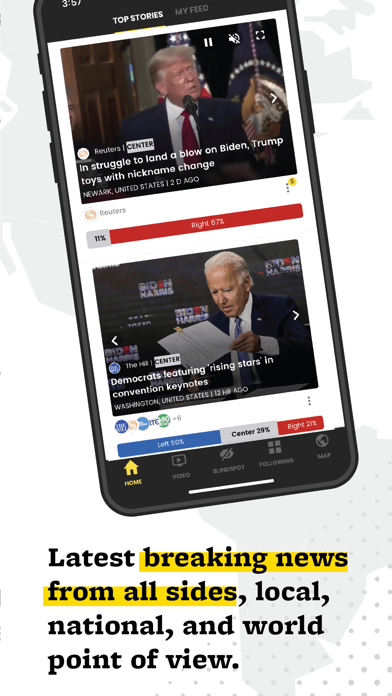 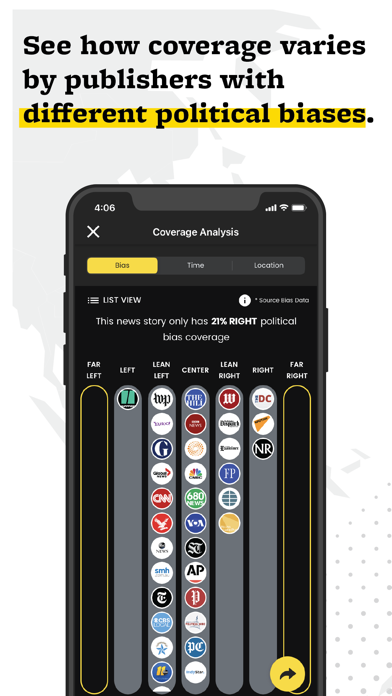 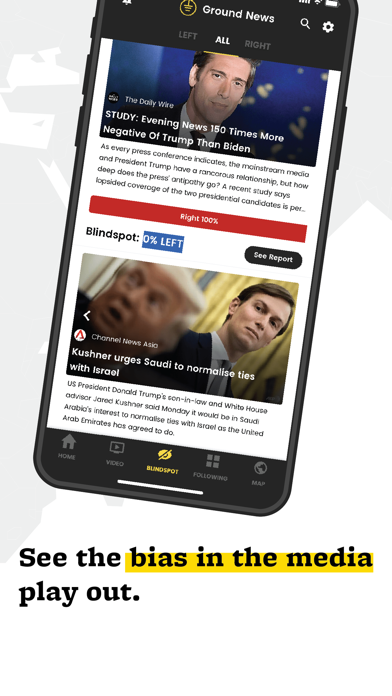 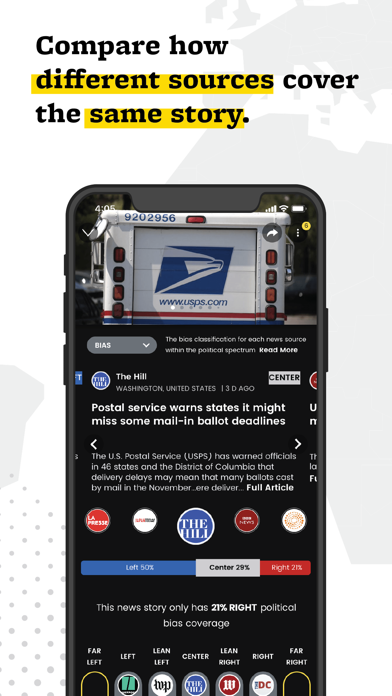 Lot of work to do

I like the idea but the app needs some more work. For one I get news saying “55mins ago” and when I click on it its an article from 2015 (over 6 years ago). Luckily I can quickly tell its an old story, but this is very misleading and the opposite of what the app claims to do: Fight misinformation. A second complaint is that though I’ve been exceptionally patient with it, its hard to know how to use the app, and I suspect a lot of people delete the app after being confused on how to use it or fail to see its value.
By donhuea123

A good idea but just another nail in the journalism coffin

Apps need to pay journalists not just “take” their work and try to turn a profit. On top of that, this app is judging their work on a political spectrum. Seems like a good idea but the work I’ve seen on this platform was not written by conservative or liberal journalists. They’re just journalists. Search through the FAQ and the About pages and there’s nothing about how Ground News is paying the journalists or the news organizations they work for.
By Homezin

My favorite news app. It's great to be able to find multiple sources easily. The only thing I would like is to mark sources that put auto play videos on every article so they can be avoided.
By xirian

While I love the idea behind this app, I was frustrated with it within five minutes. What’s important about an app like this is that it can help the average reader learn to distinguish fact from opinion. With that being said, the graphics that show bias are immediately confusing. Make it simple, dudes.
By ExidorBGoode

So far I see the potential with Ground News and i am planning to use this exclusively. That being said I noticed a bug and wasn’t sure if there was a process to share so I decided to just do it here. I am uninterested in celebrities so I have this not selected but I am interested in the environment so I have that selected. I have noticed that a title that includes the word “environment” is included in that section but I am getting articles in my feed regard toxic environments on social media. Nothing to do with actual environments. I see the logic but can recognize that I would like to see a way to tag an article from a topic in the feed to say it isn’t suppose to appear there. Idk but so far probably the best news app I’ve used. Better than reddit for sure. Great Job!
By Dougx96

this is one of my all time favorite apps. it’s so nice to be able to fully take in the events from different perspectives that you typically would never see. i recommend this to anyone looking for a better way to get their news!
By jmr5290

This app is a huge public service. At a time when traditional media institutions have taken sides on some issues, it is imperative that to see the whole picture and make an informed decision yourself. That’s what this app provides, especially when it comes to the blind spot feature. A right leaning news source may omit coverage on one development when it doesn’t fit their narrative, while a left leaning news source may omit coverage when it doesn’t fit their narrative. The app’s side-by-side compassion also shows how coverage can be slanted. Overall, this app has provided additional insights towards helping me becoming more informed. As an independent who reads across the spectrum, I find this app to be credible. I’m a fan of its layout and glad to have stumble across it and have since subscribed to the premium version. I had a question on the app’s search functionality, and the team responded to my question and helped me locate coverage of a story I was searching for while still being relatively new to the app.
By LegitBo$$

Getting better and better

The small team of folks at ground news are doing a great job. Can’t wait to see this thing explode to the mainstream. Great tool.
By arcarsination

This is the best of the news apps that provide a biased informed news information that I have used.
By gnebeker

The world needs this app

So far, so good. I love this app. I hope Ground News continues to be unbiased. It seems all the "fact" checkers are biased. I feel strongly about this issue and believe Ground News has an excellent opportunity for grand success if they can remain unbiased. Very tricky stuff. Money influences everything. I hope the investors don't apply any bias pressure.
By Gatsby's Dad