By The Young Turks, Inc.

TYT Plus brings you award-winning news and talk, and groundbreaking, independent journalism. We offer progressive commentary and fresh ideas with The Young Turks, hosted by Cenk Uygur and Ana Kasparian. Whether you’re looking to be informed, entertained, or both, TYT Network has the stories you want and the anti-establishment, no-holds-barred insights you need. Watch full episodes of your favorite shows including: - The Young Turks - Aggressive Progressives - The Breakdown Getting started is easy. Just download the app and enjoy our free videos, podcasts and live streams. Some of our programs are marked for TYT Members only with a "TYT Plus" banner - if you want to watch or listen to those programs, membership is only $4.99 a month. Watch and listen on your phone or at www.tyt.com. Cancel anytime. A paid membership to TYT Plus includes: - Access to all videos and podcasts: members get full-size versions of all shows and podcasts, with more than 15 hours of live content per week. - Ad-free experience: No annoying pre-rolls to slow you down. - Get the news you care about: Customize your notifications to receive updates on live shows, special events, and breaking news. - Support independent journalism: TYT Network covers stories that fall through the cracks and are ignored by major media organizations. - Hold the establishment accountable: We take politicians on both sides of the aisle to task for their actions every day. Payment is charged to the iTunes account at confirmation of purchase. Your account will be automatically charged each month for renewal at least 24 hours before the end of the current billing period. You can manage your subscription and auto-renewal by visiting your iTunes Account Settings. If you turn off auto-renew during the current subscription period, your subscription will be canceled for the subsequent period. For help, please visit https://accounts.tytnetwork.com/faq Privacy Policy: https://tytnetwork.com/privacy/ Terms of Use: https://tytnetwork.com/terms/ 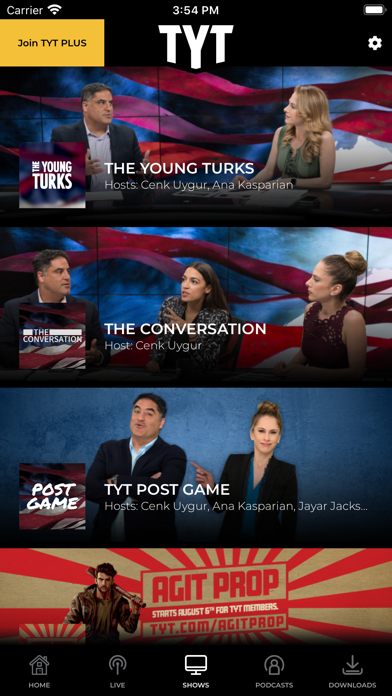 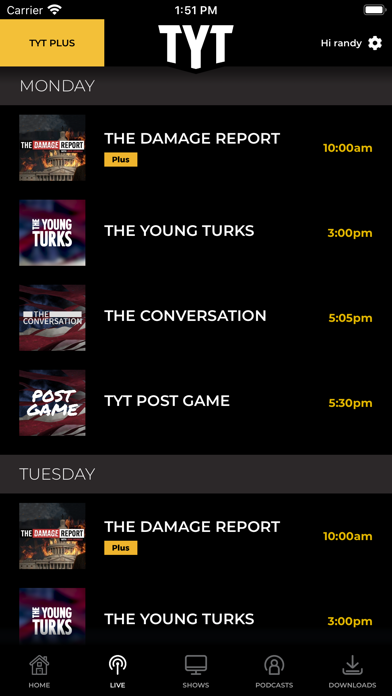 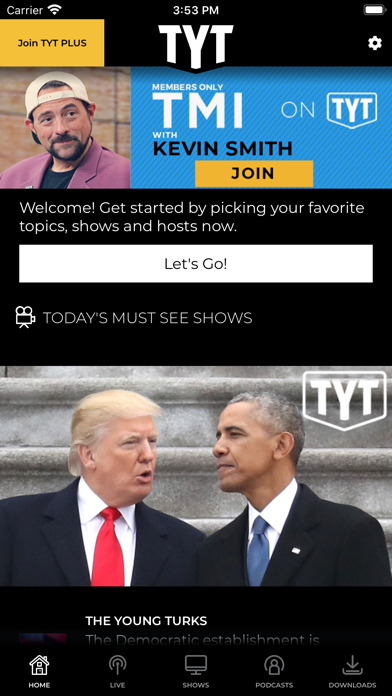 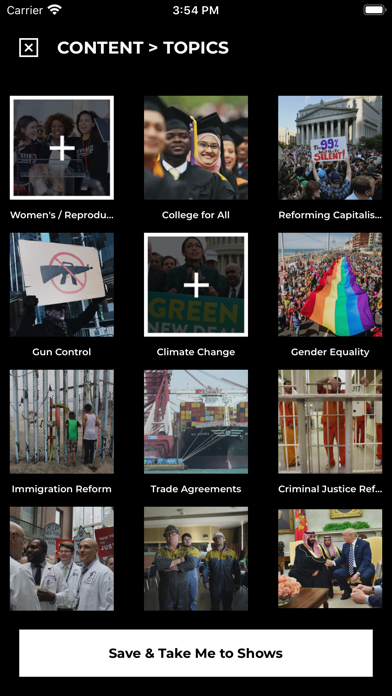 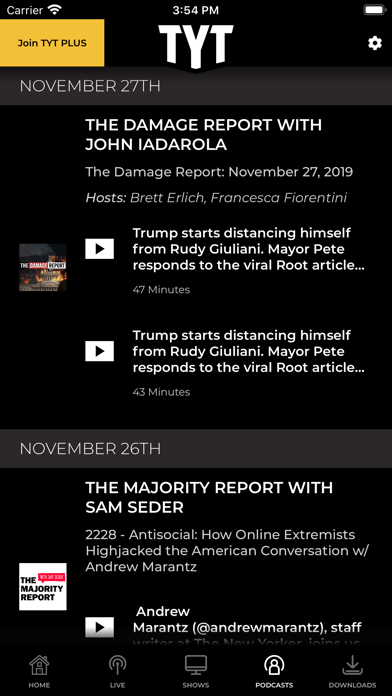 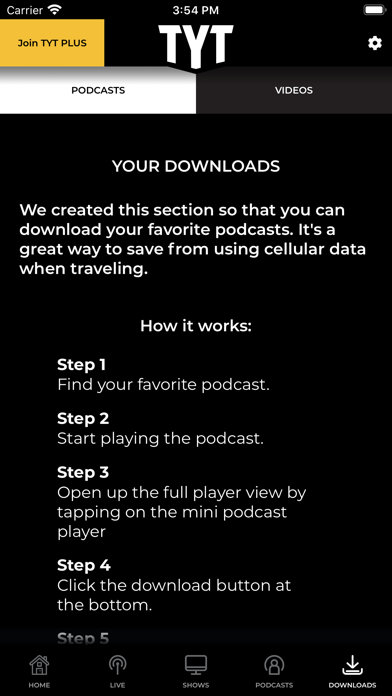 I’ve been a fan for years, but only just started sharing recently. For real, progressive and timely news (plus some great humor), TYT is the place to go. Love Ana, Cenk, John, Francesca, Tyler - well there is something for everyone here. CHECK IT OUT AND JOIN!
By linn2u1

This app constantly has issues. Most updates resolve major issues but for months the app has been logging me out and ignoring the membership I signed up for through the app (and thus, through Apple). The TYT team was unable to resolve it and I lost out in content for nearly a month until I renewed with TYT directly. Now the app just won’t keep me logged in and every time I select a new segment I’m forced to login through Google for the umpteenth time. I love TYT, but the team behind this app is having a really rough time and aren’t the best with customer service, unfortunately.
By Jasmine1100

Why does this application need access to my local area network and Bluetooth? I like your website, but I don’t trust this app and I’m removing it.
By collieshangles

Live shows are rarely available. We have better luck tuning in on YouTube. Canceled my subscription for the 2nd time. EXTREMELY DISAPPOINTED.
By IslandDoll418

You’re not going to get news this honest anywhere else

The content is fantastic, the hosts are the best, the analysis is honest. Unfortunately the app itself sometimes has bugs, like if you quit it won’t remember where you were in a certain episode or segment, and that drives me crazy because I don’t remember either lol. STILL WORTH IT.
By Willow R Smith

Member for years. The app is almost perfect. Picture in Picture needs to be available for non-live shows though.
By Nste6845

The app doesn’t work for live shows. It closes out after 2-10 seconds of watching which is extremely disappointing. I’ve contacted tyt several times concerning this and received no response. Disappointing considering I pay for monthly membership.
By Kahlia*

Lots of potential but lots of crashing...

I love TYT and have been a member for about 6 or 7 years. I understand that the app is a work in progress but...my live stream has been crashing for MONTHS. I'm not sure if they just haven't received enough support requests regarding this issue or are just understaffed due to Covid-19 but please know this is a huge issue. I can never watch the post game live because you need to be a member in order to watch live and the live stream always, always, always crashes. I also really wish we could interact with you through the app, even after the live stream is over just the ability to post comments would be great. There's a loooooot of room for improvement. Again, I know you guys are working on it but hopefully it becomes a priority since it's a great tool and perk for members. Thanks for all you do but also fix it? Love u guys! Ya'll rock ma bananas.
By naeruve

TYT is a lifeline

I can’t believe TYT has such few reviews. I’ve listened to them everyday for many years now. TYT has cleansed my brain of the mainstream media manipulation that so many people buy into and remain neutral. I’ve learned about so many wonderful progressive people, policies, & action plans through TYT and I couldn’t recommend them more. We love you TYT!
By Mrs BNG

Love TYT but not the app

I absolutely love TYT and everyone involved. TYT is my number 1 source for news. With that being said the app is terrible if it wasn’t for the fact that it is TYT this app would have been uninstalled the moment I opened it on my iPad and realized their is no iPad app it’s just the iPhone app with the arrow in the corner to make it bigger. The time between a show ending and appearing in the app is way to long. Most times I can pop over to YouTube and start watching what I missed immediately after the show but have to sit threw commercials and/or hope they don’t take down the video I’m watching before I finish because I don’t know what time they finally update the app, most times I end up missing whatever it was or having to just watch it the next day generally causing the same loop to happen over and over. Yes I am a member and will continue to be regardless of how terrible the app is because TYT is a must for all Americans. 3 stars strictly because it’s TYT 0 for the app
By Unknownerror

More by The Young Turks, Inc.