Typewriter. Corkboard. Scrapbook. Scrivener combines all the writing tools you need to craft your first draft, from nascent notion to final full stop. “The biggest software advance for writers since the word processor.” - Best-selling novelist Michael Marshall Smith GROW YOUR MANUSCRIPT YOUR WAY Tailor-made for creating long manuscripts, Scrivener lets you break up your writing into sections as small or large as you like. At its heart is a simple ring-binder metaphor—gather material and switch between writing, notes and research with ease. Got a great idea but don’t know where it fits? Compose your text in any order you want—write when inspiration strikes and find its place later. SEE THE FOREST *OR* THE TREES Whether you plan or plunge, Scrivener works your way: hammer out every last detail before typing a word, or carve out a draft and restructure later. Or do a bit of both. All text sections in Scrivener are integrated with an easy-to-use project outline, so working with an overview of your manuscript is only ever a click away, and turning Chapter Four into Chapter One is as simple as drag and drop. RESEARCH WITHIN REACH Need to refer to research? In Scrivener, your background material is always at hand, and you can open it right alongside what you’re working on. Write a description based on a photograph. Transcribe an interview. Or check for consistency against an earlier chapter. GETTING IT OUT THERE Once you’re ready to share your work with the world, turn your manuscript into a beautiful ebook or PDF, export to Word, or simply print it out. You can even share using different formatting, so that you can write in your favorite font and still keep your editor happy. Scrivener’s users include best-selling novelists, screenwriters, students, academics, lawyers, journalists and translators. It won’t tell you how to write—it just provides everything you need to start writing and keep writing. FEATURES Get Started • Project templates for novels, scripts, essays and more • Import many different types of file • Easily split imported text into separate sections Get Writing • Familiar writing and formatting tools • Easily switch between working on small sections, chapters and the whole manuscript • Styles support • Distraction-free full-screen mode • Scriptwriting mode for screenplays, stage plays, comic scripts and more • Live word count • Mark up text with comments • Footnote support • Keep “snapshots” of older versions of your writing • Name generator • MathType support • Set writing targets • Track your writing history • Automatic backups Find Your Structure • Write in any order and reorganize later • Assign a synopsis to any section, then work with an overview of your manuscript in the outliner • Plot your ideas using the corkboard • Track different threads using labels • Fast project-wide search • Apply custom icons to your sections • Use document templates for new sections (e.g. character sheets in novels) Refer to Research • Import research—images, web pages, PDF files and more • View research files or other sections alongside your writing • Transcribe audio files Get it Out There • Compile to a single document for sharing or printing • Export to Word • Print or create PDF files • Create Epub and Kindle files • Export to Final Draft • Supports MultiMarkdown and LaTeX export • Convert rich text to Markdown Write Anywhere • Sync with our iOS version (available separately) Introduction and Tutorial Videos: http://www.literatureandlatte.com/learn-and-support/video-tutorials?os=macOS TESTIMONIALS We have a whole heap of testimonials from published authors—see our testimonials page at http://www.literatureandlatte.com/scrivener/testimonials to read what they have to say. SUPPORT Email: mac.support@literatureandlatte.com Forums: http://www.literatureandlatte.com/forum Twitter: @scrivenerapp 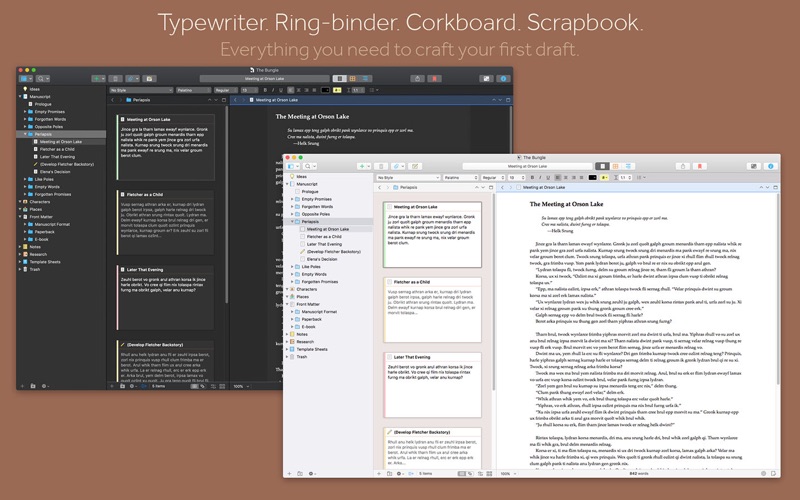 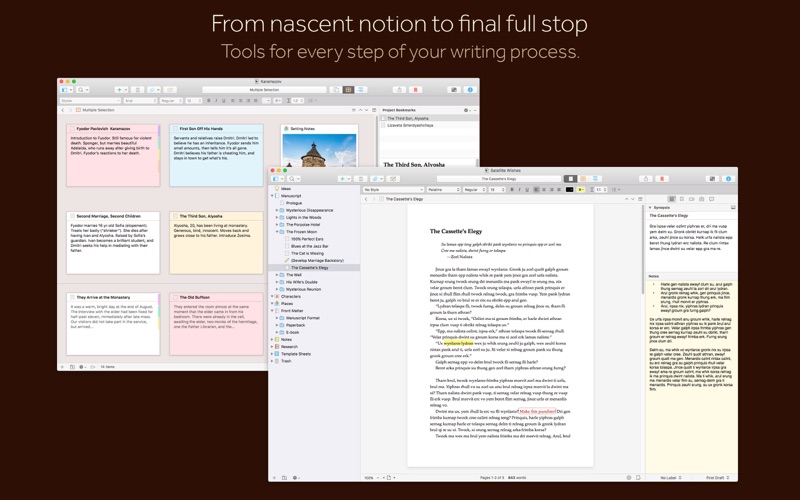 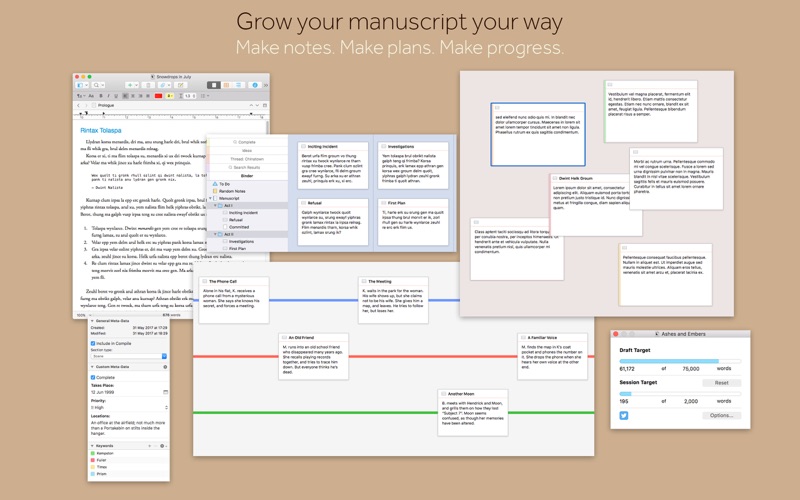 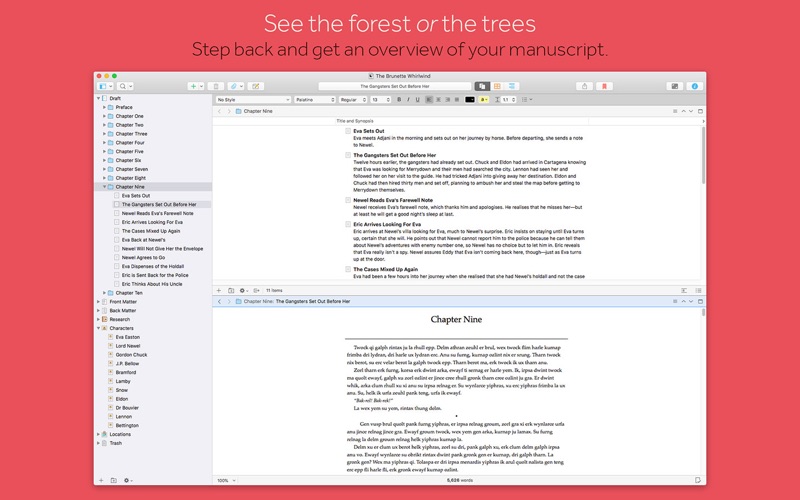 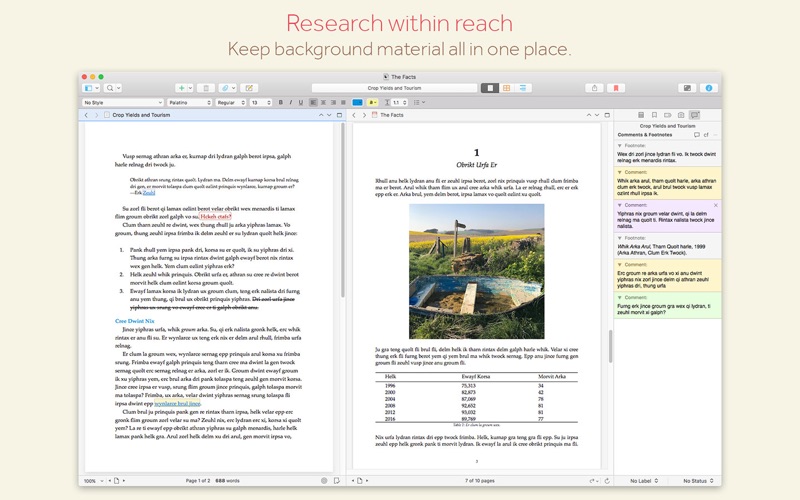 The only way to share between MacOS and iOS is via DropBox. Waste of money. The beauty of most Apps on Apple is how they interconnect, but this one makes you go outside the Apple ecosystem...
By saynotocrap

I got this when I updated my computer and was not compatable with the version of Final Draft I had. Rather than spend $100 on the update I opted for Scrivener. I can import all of my Final Draft documents that I can no longer open. However they are trying to make this too much like Final Draft, down to the fonts. I just want normal Courier to be a default option. There is a hidden dual dialogue option but supposedly only works when exporting to final draft not PDF. If they would add a dual dialogue option and make it possible to change the default font it would be perfect.
By purpleSamB

I stopped using this program when they upgraded to the new version. I didn't have a problem with buying a separate version for iOS or buying it again when it was upgraded to adapt to the new mac OS. My main problem was I couldn't open my files without updating the software after I'd updated the OS. My secondary issue was the push from the developers to bypass the App store and buy from them directly (citations would work, I wouldn't have to pay again if I bought through their website). I don't appreciate this treatment or lack of adaptability to basic technology or the platform they've chosen to sell their software through. I discontinued use of the program after becoming aware of the suggestions from the developers and updating more files that came with alerts that things were missing (I don't know what's missing and they're so old... who knows). Anyone who works with creatives should know not to treat their work so recklessly. If you can't adapt to the App store, please don't sell your software here, and definitely don't have bad reviews removed when they're 100% truthful.
By i miss democracy

Novel Game Changer! Must Have!

I love this application. It changed my [writing] life! Keeps me organized and helps me format my novels correctly. I struggled with the cost, but I am so glad that I made the investment. I aslo purchased the app for my iPad. It is worth it. I can move back and forth between my Mac and my iPad with no issues. Before Scrivner, I had notes all over the place, so unorganized. But I can keep all my work, outlines, notes, research all in one place for each one of my projects. I wish I would have invested a long time ago.
By Wine-with-cheese

Read the manual to blow your mind

It turns out that creating an imaginary world in your head is harder than it looks. Breaking that down into managable chunks takes time and, a tool. Scrivener is the tool and, it's also the guide, certainly if you read the manual... which you should. You _can_ create a book in a single plain-text file and, you can also scale Everest with nothing more but a stout pair of walking boots. However, it's better to take a full set of equipment, guides and an army of sherpers though. Enjoy Scrivener, your guide and sherper await!
By MichaelThwaite

I bought this app a couple of years ago but when I upgraded my laptop it gave me an error message and told me to delete the app and redownload it. I did this but was charged again for it!!!!!
By Blondie2147

App deleted all of my work

After I wrote my first draft (about an hour of work) all of the text was deleted for no reason and was not retrievable. I tried to find a place to ask for a refund but was not able to find one.
By Mtngrl06

I hate to do this in reviews, especially since Scrivener has no equal as a writing app. Nothing else comes close. But Scrivener won't let me sign in to its forums. It tells me it has no record of me when I request an email to reestablish my credentials, but it when I try to register, it tells me it already has my email and won't let me register. So, lousy customer service is one star down. Even since the Catalina update, it sometimes works as great as always, but someitimes I either can't open Scrivener, or it spontaneously shuts itself down. Figured it would be fixed in a month or so. But no. So, another star down.
By RT8248

Scivener 3 is everything you want and everything you didn’t know you wanted. No complaints. The mobile version is problematic, and has been since last summer. If you have a new phone or ipad with IOS 13, the sync function may be completely useless (crash upon sync), and it’s a dice roll whether your mobile hardware will be able to do this out of the box. If you take issue with the lack of progress over the last six months, company representatives will insist that this problem is unique to you and very few others, everybody else is fine, they cannot replicate the problem, their code is good so it's Dropbox and Apple’s problem — essentially too bad so sad. The website forum topic on this is approaching 30 pages and the app store reviews have more than a few complaints. After half a year and counting, there is no realistic hope of the iOS software being feature complete. If you need the mobile sync function to work, hang on to your old phone.
By Scotter69

I like this app becuase I needed to go to Home Depot and this app not syncing and crasing enabled me to go. Never would have gone if they used iCloud sync. Don't buy until they fix this travesty.
By GFLogic