The keys to the factory are yours! Step into your all-time favorite Chocolate Factory for a game unlike any other. Complete puzzles, with Mr. Willy Wonka himself as your guide, to customize the Chocolate Factory for its grand re-opening. Combine the swapping fun of match 3 games with the creativity of customization, as you unlock iconic and never-before-seen rooms. Beat puzzles to earn fantastic power-ups and advance through the factory. No matter if you have a few minutes or a few hours to enjoy matching fun, Wonka’s World of Candy is the perfect match 3 game to help you escape into a world of your creation. Dive into the magic of Willy Wonka’s Chocolate Factory with these scrumdiddlyumptious match 3 features: ● Conquer puzzles to unlock and customize the famous Chocolate Factory’s many unforgettable spaces, including the Chocolate Room, Wonkavision Studios, and Fizzy Lifting Drinks Room, as well as all-new, never-before-seen rooms of the factory. ● Play the Golden Ticket Rush for a chance to win exciting prizes. Match your way through eight exclusive levels to earn Limited Edition rewards with which to customize your factory! ● Super-charge your puzzle solving ability with amazing power-ups in this unique match 3 game! Conquer your board with Colorsplash Cordials, Plumping Beans, Sugar Beams, and Scrumdiddlyumptious Bars! And don’t even get us started on the elusive, delectable Everlasting Gobstoppers! ● Discover Wonka’s surprising animal factory suppliers in the form of chocolate, vanilla, or strawberry milk cows, cotton candy sheep, and Golden Geese! ● Customize the factory to your tastes. Pick the perfect candy tree or chocolate bench for you! Complete match-3 levels to unlock new stories in the factory, such as restarting the chocolate waterfall. ● Collect Sugar Bags to fuel colossal candy contraptions like the rare Scrumdiddlyumptious Machine, and get game-changing power-ups! ● Timeless music and characters – including Oompa Loompas, Charlie, Veruca Salt, Mike Teevee, and the rest of the crew in a fantastic candy game! ● Celebrate the classic film with special time-limited events. The whole World of Wonka is at your fingertips! ● Compete and cooperate with your friends and family to roll Violet Beauregarde to safety, sort Veruca Salt down the right chutes, and rescue Augustus Gloop from the chocolate pipes! ● See the factory like never before - in 3D! Just tilt your mobile device to shift the game’s camera angle or zoom in to watch Oompa Loompas hard at work! ● Take advantage of offline mode, and play anytime, anywhere, even if you don’t have an internet connection. Satisfy your candy cravings and download this magical match 3 puzzle game today! Additional Information: ● Wonka’s World of Candy is free to play; however, in-app purchases are available for additional content and in-game currency. ● The game will request access to your Photos for Customer Service support. If you do not grant that permission, you will not be able to save or send your game screenshots to our Customer Support. ● Use of this application is governed by Zynga’s Terms of Service, found at www.zynga.com/legal/terms-of-service. ● For information about how Zynga uses personal data, please read our privacy policy at http://www.zynga.com/privacy/policy. ● WONKA’S WORLD OF CANDY software © 2018 Zynga Inc. ● WILLY WONKA & THE CHOCOLATE FACTORY and all related characters and elements © and ™ Warner Bros. Entertainment Inc. (s18) 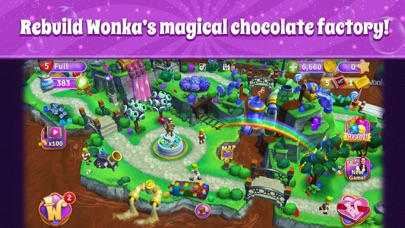 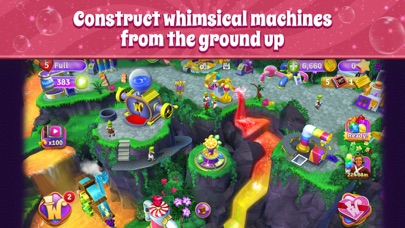 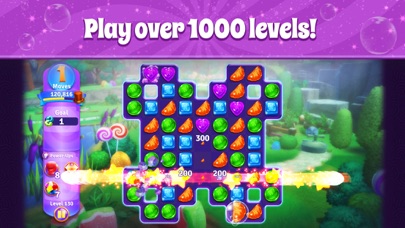 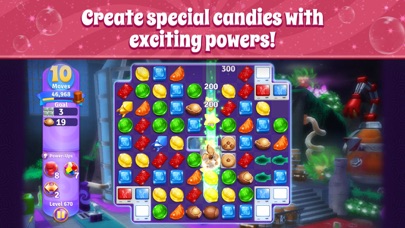 I love this game. I’ve been playing for a few months and I really enjoy it. However, I am frustrated because I win the Gold Rush level 5 over and over, in many different rushes or the same one again and again, and the program does not recognize my accomplishment, and I don’t get the reward. (Level 5 is the goal in each rush). I have tried on a few occasions to contact the team, and....crickets. So I have turned here in hopes of a response. Regardless of this issue, I will continue playing. It’s fun and without pressure.
By Gigianna!!!

Levels are not that difficult so it makes playing fun and addictive. The level before the hard level are generally very difficult but it balances the total game out. I play to have fun and not get upset because the developers push you into buying things. This developer makes games that are fun to play and don’t bother you with to many ads. Being a big company and traded on the exchange allows that to happen. This is an awesome company and everyone should check out more of their games.
By duke nukem2017

Good game but still a lot of bugs

Fine line between love and enfuriating!

First, I love this game and have been playing for a very long time. I’m on level 774. My daughter and I play together almost every day. But it’s quickly gone from fun to infuriating! I’ve been on the same puzzle for more than a month while playing daily. It’s no longer fun. I originally gave this app four stars, but it’s ridiculous to make a game solely based on luck and money (buying moves or tools) to get passed a level. I understand your whole purpose is to make money, but besides the great theming and smooth gameplay, this has turned out to be just like EVERY other puzzle game - a ploy to try and get as much money out of players as possible instead of focusing on leveling your game correctly, and making the whole experience enjoyable. This is way past reasonable when you give a player 15 moves to accomplish HUNDREDS of tasks on a single level. I’m done. I’ve gone from loving this game to now deleting it! We’ll find another puzzle game!
By LeMastertheMoment

The Mature Me Loves This Game!

UPDATE: 8/9 Still NOT playing!! I was browsing today, just to make sure I wasn’t missing the Daily Bonus. There’s still no Daily Bonus, but I can PAY $5 for two days of a POSSIBILITY of the tiny daily bonuses. NOPE, NOPE, NOPE!! Mr. Wonka, you are now just a greedy son of a gun, so no more! My adorable little factory will stay as is. UPDATE: 7/20 I have loved playing this game, but I am not playing it again without the Daily Bonus. The bonuses are never big, never, but depending on the day, you can get at least 15 extra minutes, or jelly bean plumbers, a Golden Ticket or 2, and if you’re number one, an everlasting gobstopper! I’ve spent way more money on this game than I ever should have (I own my stupidity), but minus the Daily Bonus and its meager rewards that occasionally help win levels, I’m not playing because I’m assuming the expectation is I will spend more money to pass levels, but nope, I will not. I don’t mind playing a level 50 times to beat it, but when it continually needs one more move (which one of my meager rewards might, might help with), just no. UPDATE: Although, I was obviously mad as heck about what happened below, now that I’ve returned to being an adult and not a 5 year old losing Candy Land, I really do love this game. It’s beyond well done. I did notice that although I had to repeat 4 levels, my money spent to pass level 222 had been returned to my account. Oddly enough, instead of taking another decade to pass (and real money), I got through it on the first try. (No, I did not remember any strategy.) The game addicting because it’s so adorable. I WAS loving this game, but not since it just knocked me back from Level 222 to 218 after spending $10 to pass Level 218 where I was stuck FOREVER! I normally don’t spend money on games, but I was so enjoying it that once I got down to “just shy of finished,” I paid dearly for 1 level! The game just updated and wiped out my advances BEFORE I could use my 4 stars!!!! I could have stopped and used 2, then I’d only be cheated out of 2 stars, but the next levels went well. I want this fixed or I’ll happily tell everyone I know who is playing it to STOP! YES, I USED THE SAME SAVED GAME SETTING, BUT I CANNOT STOP IT FROM UPDATING MID-GAME! I don’t see anyway to contact Zynga, so they can bug off!
By Kathryn8888

Love this game but

The Golden Ticket level 3 & 5 no longer give you Wonka bars and power ups The rush will give you unlimited lives and that’s it until you watch a video ad, then it starts breaking your gold hearts for lives and still no pay out of prizes. Please fix this bug!
By Puzzle Balls

I can’t say one negative thing about this game...the real images of the characters, the music, the gameplay is super addictive and overall just super satisfying...brings you back to “A World of Pure Imagination” The best game of its kind!
By 1345257888

Have to pay to continue playing or wait over 7 hours

I loved this game and am up to level 1450 and now I am being forced to pay coins to continue playing or wait over 7 hours to continue. This needs to be changed. I paid extra to get the Master Chocolatier level and it is a scam.
By Smoyerfam