Arrive safely. Travel weather forecasts for your entire road trip at the time you will arrive. Weather alerts, radar, traffic cameras, and plan for rests. Family vacation? Long-haul trucking? Heading to a motorcycle rally? Touring in an RV? We want to ensure you arrive safely. There's nothing like the uncertainty of knowing if you'll reach your destination, or having to cancel that trip you've planned for weeks. Instead of searching for weather forecasts city-by-city, get all the information you need all at the same time, in an easy to understand display. • Compare weather forecasts through your entire trip side-by-side. • Get recommendations for the best time to start your trip. • Drag the slider to instantly adjust your departure time and see updated forecasts. • View live outdoor cameras for your trip. • Get severe weather alerts along your route. • Add rest stops to long trips. • It's not just the temperature: Wind and precipitation levels inform whether travel is safe. • Global weather forecasts, for all regions of the globe. All planning features are provided free of charge! For active driving mode, a subscription is required. Subscription Details: • Length of subscription: 1 month (with 1 week free trial period) • Price of subscription: $1.99 / Month • Payment will be charged to iTunes Account at confirmation of purchase. • Account will be charged for renewal within 24-hours prior to the end of the current period. • Subscriptions may be managed by the user and auto-renewal may be turned off by going to the user's Account Settings after purchase. • Any unused portion of a free trial period, if offered, will be forfeited when the user cancels a subscription. Privacy policy & terms and conditions: https://www.weatherroute.io/privacy_policy.html 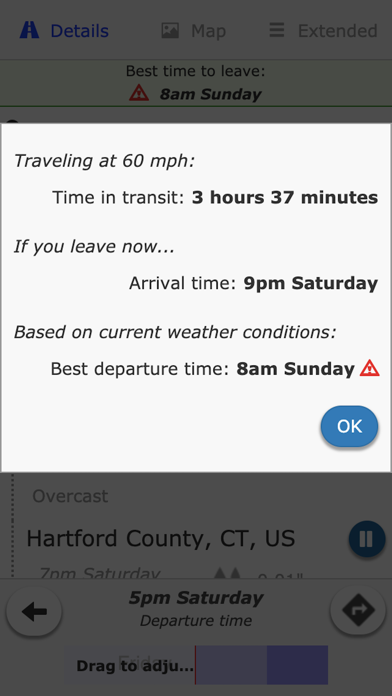 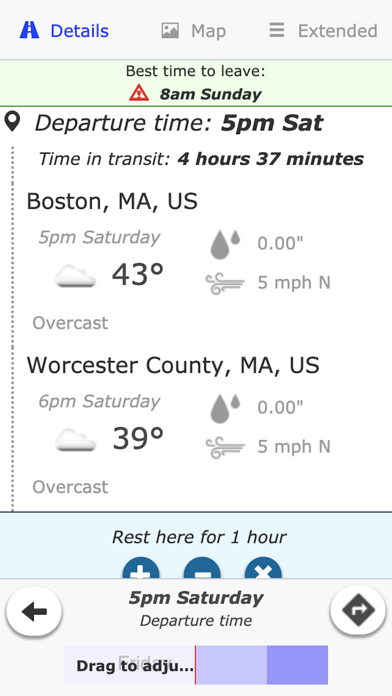 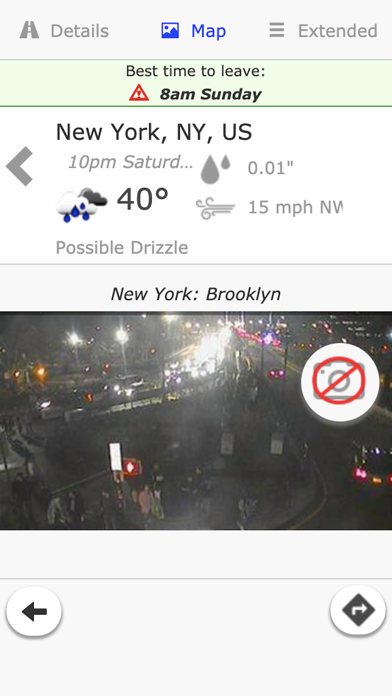 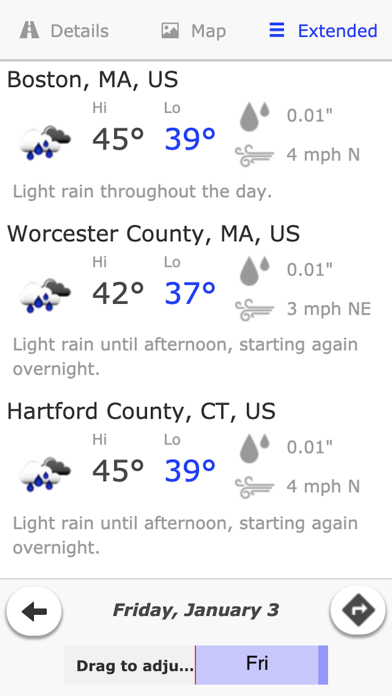 Just purchased te app prior to our snowbird flight from Wisconsin to the South. The reports saved us from the terrible tornadoes and icy conditions we would have faced. I would add; the $1.99 is a cheap price to pay for safety👏 Tooooo bad this app was not available years ago. A definite buy.
By Bigwave chief

The slider used to select departure time is very error prone, often shifting when I lift my finger.
By SimDan

We travel full time in our RV, and this app has kept us from heading out on the road when it was nice where we were but horrible down the road. Very helpful.
By cd13

I found this app to be helpful and accurate. I travel slit and always go to this app to see the weather ahead. Comforting.
By dispersedblmboondocking

Must have travel app!!!!

I travel alot. I have many travel apps on my iPhone to use. My niece and daughter told me about this one. I downloaded it and LOVED it. I wrote the developer about a suggestion I had and he immediately went to work on it!! To my surprise he listened and implemented them within a day or 2. He actually paid attention to the feedback . Wish other developers were as engaged as he was. Thank you for that. Now instead of 5 essential apps I use, this cuts it down to 3.❤️❤️❤️👍
By Bebegogo

Stupid app, I deleted it.

I'm leaving for Florida in a couple of days, so I put in my destination, and asked for route guidance. It showed me a bunch of towns it's routing me through, none of which I'd ever heard of. None of the major cities I'm actually going to drive thru were in their route. I zoomed in on their map, and saw they were routing me on local roads, not on interstate highways. I tried to edit their stupid route, but it can't be edited, you have to take it or leave it. I left it in the app cemetery, to rest in peace alongside all the other useless apps I've deleted. Baldfellow
By Baldfellow

Motorcycle trip from DC to Dallas. Departed June 27. This app showed no rain on I-40 through TN. Encountered late thunderstorm going into Nashville 27 June and again next morning. On return no rain forecast starting 4 July. 5 July got hammered by late afternoon thunderstorm that almost blew me off the road. Storm Radar app and clearly developing storms gave me time to prepare. This app not so much.
By jjg in va

Wish I had this sooner... and glad I have it for all future traveling I do.
By G in Reno

Man oh man do I love this app not overly complicated and simple to use. I am a long haul trucker and this app has saved me especially during the winter going up and down mountains on the west. I would only add one thing and maybe for the app to follow you through each city and state so that I don’t lose track of where on the map I am at. But other than that 10/10
By gear jammin son of a gun

My new car has ApplePlay. Unfortunately this app isn’t compatible with ApplePlay. Will you be creating a version that is? It would be great to be able to switch between Waze and your app. Thanks.
By rgvw