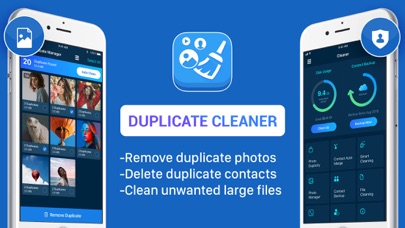 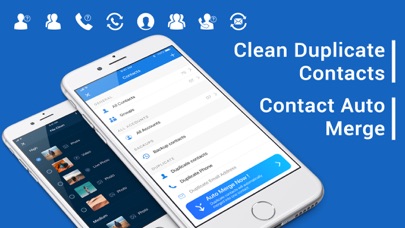 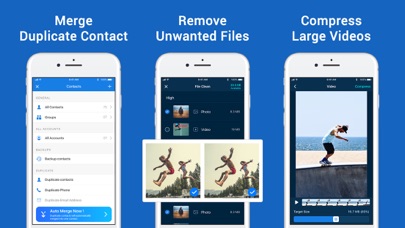 This app is a complete waste of time for merging contacts. You have the option to merge ALL of your duplicate contacts into ONE CONTACT (Why would you ever want to do that???) ...or manually go through all the duplicates it found and merge them one by one...which actually deletes the data in the duplicate contacts...absolute pointless. Zero stars. Do better.
By iAmiKahn

I purchased this app and it constantly crashed. I contacted the developer who said they were working on it. Now it opens but my purchase wasn’t recognized and it wants me to pay more. The app itself is terrible. The photo cleaner is useless. It picks out duplicate photos that aren’t duplicates at all! Don’t buy this, look elsewhere
By Bone809

I entered the trial for the express purpose of deleting image duplicates. Instead, it MULTIPLIED an image to 63 copies (and others to high numbers) and identified singulars. I’m deeply confused with what metrics this app is using to identify duplicates but I suggest trying a different app. This one is a bust. Even when the Apple prompt lists the images to delete, the number is different than the list given to you by the app. All in all, a failure.
By Danimal1979

Does not work properly

The app shows a lot of “duplicated” photos, but actually they are not duplicated at all and not even similar. Don’t waste your money.
By Doug Vinicius

Won’t allow me to use most of the app

It wouldn’t let me use 75% of the app, it kept saying “give us access to your photos and contacts so we can do this” so I'd press the button to go to setting and everything is already allowed, I can’t use most of the app so I just canceled my membership.
By Taste! Gaming™️

Went from occasionally crashing to always crashing within 15 seconds after this new update. Useless now
By Nickg555

Good luck trying to cancel this.

Does not work very well.
By The perfect male entertainer

Add Music to Video Voice Over