Do you need security and Web protection for your devices? Yes, lookout! If you surf the web, log into email or use public Wifi, you are exposing your privacy and sensitive information (like passwords and browsing history) to online threats. Your devices carry a lot of information and may be at risk. Norton has an all-new security app which helps deliver powerful protection for your device and personal information against cyber threats and online scams. Norton Mobile Security notifies you when it’s time to take action. Help stop cybercriminals from stealing your passwords, bank account number or other personal information. ►Wifi Security - Uses advanced scans to help detect and notify you about unsecure Wifi networks, and those under attack by cybercriminals eavesdropping on your Wifi connection to steal or glean personal information from the web sites you visit or infecting your device with malware. ►Web Protection - Helps detect and safeguard you from navigation to scam and malicious websites when using your preferred browser, app, SMS, and Email. Helps keep your device clean from viruses and malware as well as privacy of your personal information secure by helping you avoid online scams. ►Device Security - Alerts you when your operating system (OS) is out of date, so you can take action to secure and protect your device against vulnerabilities that could allow cybercriminals to take control of it or steal your personal information. Our Wifi Security warnings are: ►Wifi Security Green: No suspicious activity detected. ►Wifi Security Orange: You’re connecting to an unsafe or unsecured network. We recommend using a VPN service like Norton Secure VPN to ensure your data privacy. ►Wifi Security Red: The network you’re connecting to is under a man-in-the-middle attack, where an unknown party on the same network is spying on your online activity. We highly recommend that you disconnect. Are there email scams for iPhone users? Yes. Your iPhone may fall victim to phishing or virus scams just like any other device. This is where you are asked to click on a link for various reasons and end up providing your personal information (like user names and passwords to your accounts) and inviting this way viruses and malware. This may occur through email or text messages. Are there risks with an outdated OS? Yes. An outdated OS can create vulnerabilities and opportunities for cybercriminals. By notifying you of the latest security patches and iOS updates, Norton Mobile Security helps you keep your operating system up to date – one of the best ways to stay secure from old vulnerabilities and exploits. ------------------------------ ►SUBSCRIPTION DETAILS •Norton Mobile Security Subscription: Delivers powerful protection against cyber threats and online scams. •14-day free trial requires activation of annual subscription. •Payment will be charged to iTunes Account at confirmation of purchase. •Subscription will renew automatically at the end of the subscription term unless canceled. Cancel in your iTunes account before end of trial to avoid payment. •Account will be charged for renewal within 24-hours prior to the end of the current period. •You can manage your subscriptions and automatic renewal may be turned off by going to your Account Settings after purchase. •Any unused portion of a free trial period, if offered, will be forfeited when you purchase a subscription. ------------------------------ PRIVACY POLICY NortonLifeLock respects your privacy and is dedicated to safeguarding your personal data. See https://www.nortonlifelock.com/privacy/gps-english for more information. NORTON SUPPORT For help with Norton Mobile Security, please visit the support forum: https://norton.com/nsios_support 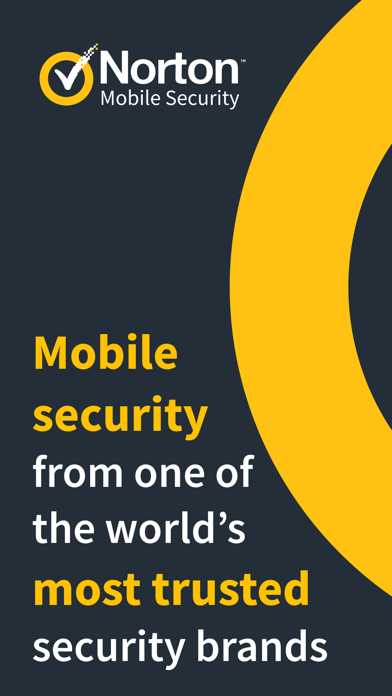 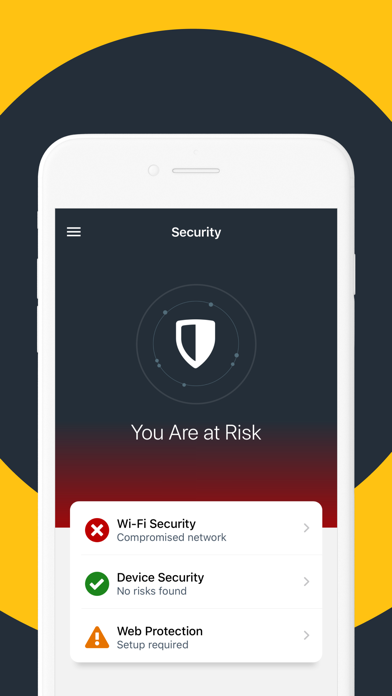 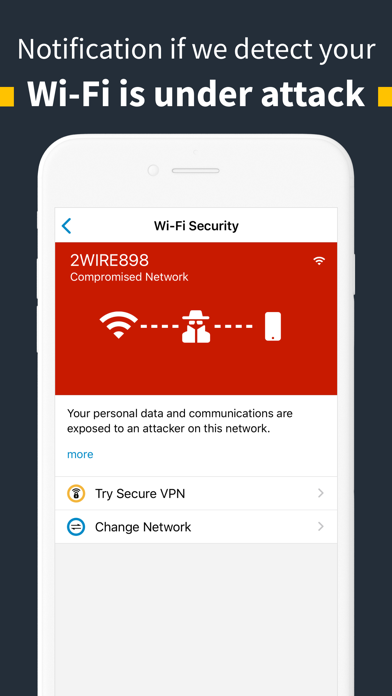 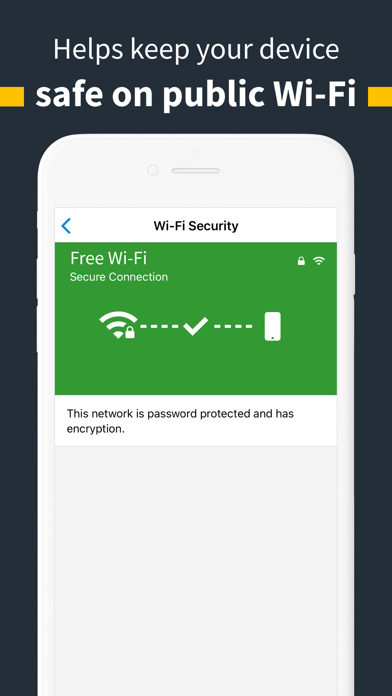 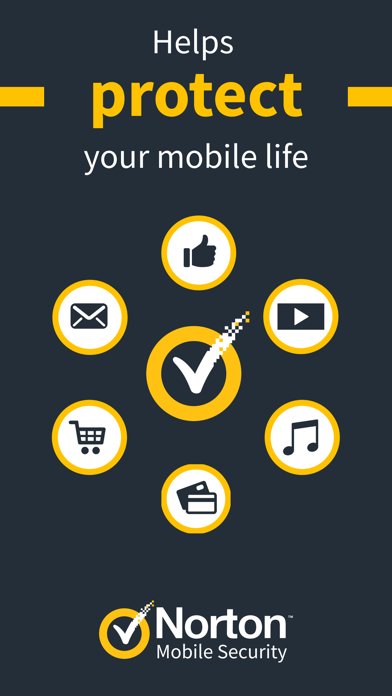 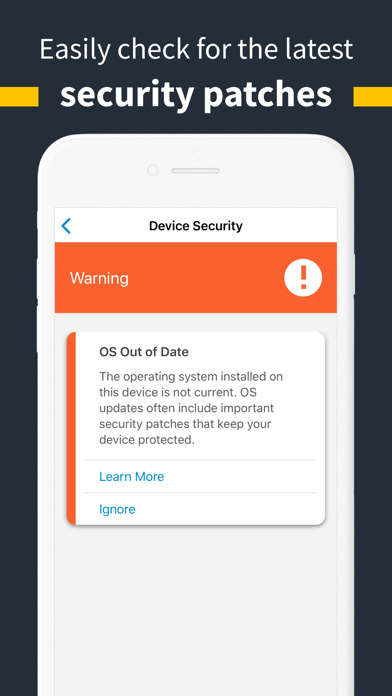 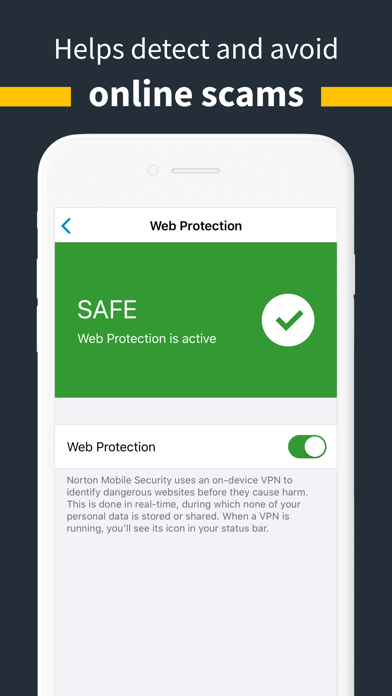 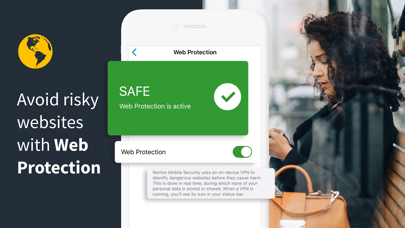 My iPhone X started shutting down an re-starting about a month ago. I could be in the middle of a call (or any activity) and the phone would simply shut down! I was having at least a dozen of these shutdowns on a daily basis. I noticed that this app was constantly showing activity on and off screen so I deleted it and the issue went away. I also noticed that this app consumed more battery energy than any of the apps that I routinely use. Clearly not suited for the iPhone X.
By Kminnich

This site was blocked saying unsafe. However, this site is Not unsafe. Wanted to watch a talk and had to use a phone without Norton. I may have to cancel Norton & use another security program. Advise. Frank S Yelin
By dogfsy

10sec WiFi for every 3 minutes

Makes iPhone useless. I’m getting only 10 sec of internet before app starts over, taking 3 minutes to restart, to only get another max of 10 seconds of internet use. Continuously cycling taking iPhone off the internet. Tech service useless to fix.
By mycobra427

Having the same issues as many other users. Have to keep VPN and web security turned off or my phone constantly crashes and is unusable. Will be canceling my service.
By jenpast

It is the most secure that I have ever use

Got a little better

Tried this on my new iPhone SE with terrible results. Removed it. Phone bad to normal. Looking back on it now, it was probably the issue with my old phone powering off, not backing up, poor performance etc. Norton is good on my laptops but not on my iPhone.
By ?!?54

Used this APP for over 4 months. Initially worked fine without any issues. Started getting message on iPhone that my data have not been backed up to the cloud in two weeks. Manually started trying to backup to cloud. Would not backup. Phone started freezing and restarting by itself. Internet started to be slow when connecting using WiFi but was faster when using cellular service. Received backup error stating my internet speed was too slow for backup. Have 2 other iPhones and 3 iPads backing up fine using the same internet connection without any problems. Contacted Apple and Sprint Support for assistances. No luck in resolving issue. Started deleting all APPs to pinpoint if the freezing and restarting was an APP issue. Sure enough, after deleting the Norton Security APP, backup to the cloud, freezing and restarting is not an issue anymore.
By Brantleytj

I’m a long time Norton subscriber. Early this year, I decided to install the app on my iphone 11 max, but my phone started to crash and reset by its own all day (dozens of times randomly during the day). So I removed the app and my phone went back to normal. Recently, I installed the app again, and same problem over and over. Phone crashing and resetting randomly throughout the day. Very frustrating because it happens during meetings, before that important call. But most surprisingly, is that other users are reporting the exact same issue, but I don’t see NORTON, doing any corrective actions and releasing a fix. SHAME ON YOU NORTON, your app is just useless!!!
By Atoto1970