SUGGESTS YOU THE GOOD PHOTOS those you seem to prefer, like edited and favorited those with faces in them, with smiles and open eyes photos in good focus SELECTS THE NOT-SO-GOOD ONES all but the best in a set of similar photos those with closed eyes blurred ones HELPS CLEAN OUT THE CLUTTER screenshots, exact duplicates, photos of text, and other clutter AND SORTS YOUR ENTIRE LIBRARY Go through every media file you keep. Swipe up if you want it, and down if you don’t. Simple as that. LEAVES THE FINAL SAY TO YOU flip through selected media to make sure you don’t want them select something else if you don’t like the app’s suggestions tap Move to Trash to remove selected files and tap Empty Trash to delete them for good BONUS FEATURE: PHOTO RADAR Keeps the “Storage Full” pop-up at bay. Gemini watches out for the new shots and videos and makes sure they don’t pile up again. The payment and subscription terms: Choose between the following subscription options: Monthly Subscription - $4.99 per month - gives you unlimited access to removing Similar Photos. Annual Subscription - $19.99 per year - gives you unlimited access to removing Similar Photos. One Time Purchase - $34.99 offers you unlimited access to removing Similar Photos. Free trial terms: Free trial for monthly subscription in Gemini Photos allows you unlimited access to removing Similar Photos for the duration of 3 days. Your account will be charged for renewal, in accordance with monthly subscription plan for $4.99 per month, within 24 hours prior to the end of the 3 day trial period. You can cancel your free trial at any time before 24 hours prior to converting your account to a auto-renewable subscription. Payment will be charged to your iTunes account at confirmation of purchase. Subscriptions will automatically renew unless auto-renew is turned off at least 24 hours before the end of the current period. Your account will be charged for renewal, in accordance with your plan, within 24 hours prior to the end of the current period. You can manage or turn off auto-renew in your Apple ID account settings any time after purchase. *** Manage your subscription directly from your iPhone *** Subscriptions may be managed by the user and auto-renewal may be turned off by going to the user’s Account Settings after purchase. 1. Tap the “Settings” icon on your mobile, then tap the “Store” icon. 2. Sign in with your iTunes ID. 3. Tap “View Apple ID” then “Manage App Subscriptions”. 4. You will be able to see when your next payment is due, or cancel your automatic renewal. *** You may cancel your subscription at any time *** Renewal of your monthly subscription is automatic. You can cancel this automatic renewal at any time, at least 24 hours before the end of the current subscription period. Please note, any unused portion of a free trial period will be forfeited when making a purchase of an auto-renewing subscription. Privacy policy: http://macpaw.com/policy Terms of use: http://macpaw.com/eula 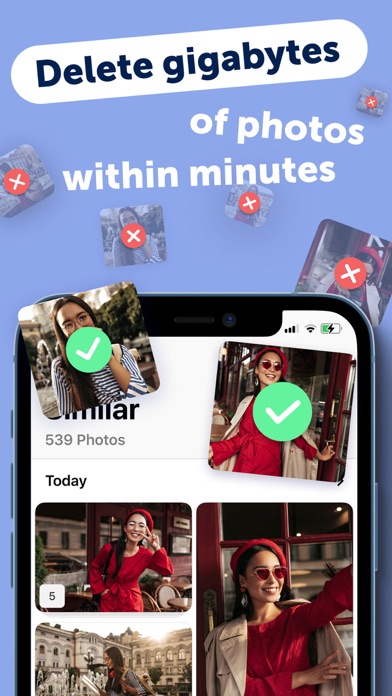 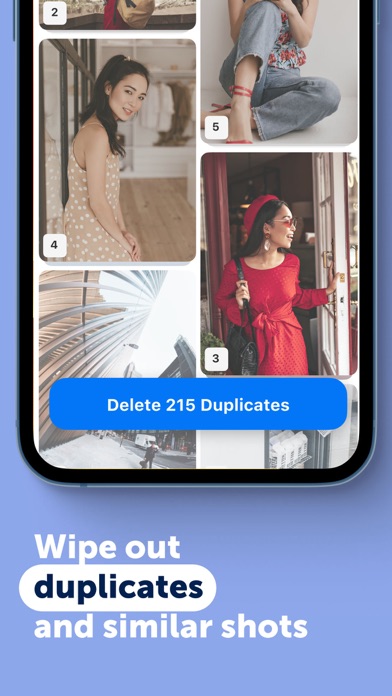 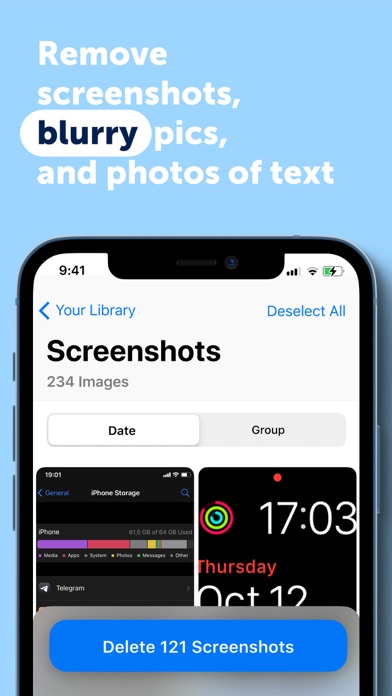 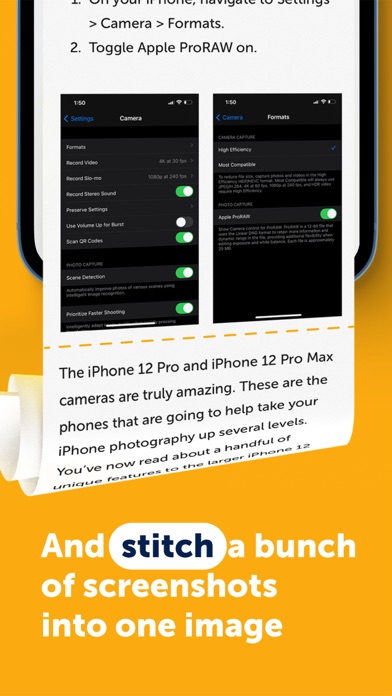 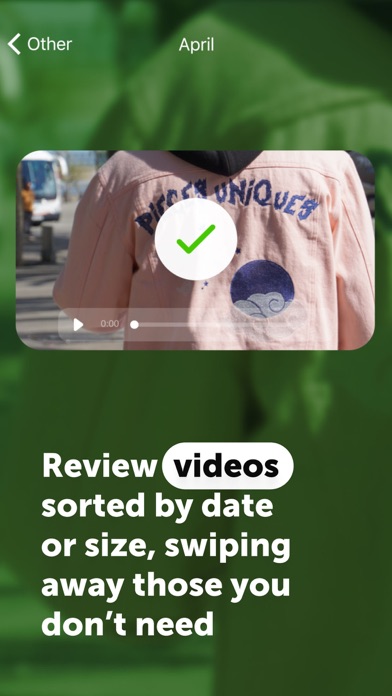 This is the first ever app review I’ve done - so that alone should tell you something. I ran out of iCloud storage so I started manually going through my photos (without the app) and got quickly overwhelmed. I searched the App Store and found Gemini Photos - I downloaded it and started using. I was instantly shown similar photos, duplicates, screenshots, and more. The app walks you through finding photos and showing you similar photos and recommends the best ones to keep and easily trash the other. Within just a few minutes I was deleting 100s of photos with ease! I bought the monthly subscription and am still deleting some photos but this app makes it so easy and almost fun! Wonderful app!! 👏🏻👏🏻👏🏻
By BlackEcho7

Does not delete duplicate photos

I found 100’s of duplicates in my over 22,000 photos and this app found zero. So I purchased it thinking it won’t until I pay for it. So I paid for it. Closed the app several times and reopened it and still shows zero duplicates. What a rip off. Tried to contact developer about the issue and their response was to go to the link they emailed me to chat with a persons that would help resolve my issue. Well the link is bogus and doesn’t work. What a scam. I would not waste my money on this app. I asked for a refund because I have canceled my subscription and deleted the app. It probably won’t happen. Good thing I am only out $5. Pretty good scam though if you do that to thousands of people. This app is false advertisement. It does not delete duplicate pictures. It can’t even find them!
By bblake38

So wait, what’s the point?

Update: Noticed i was being charged for months without me using the app at all. How lame. Terrible way to treat people. I spent a good amount of time going through my similar photos as I usually do and managed to get a couple hundred in the trash, when I hit empty trash it prompts me to pay when it used to not (recent update to start charging people for that feature I guess?) There is no other place where I can empty the trash either so basically this was a huge waste of my time and there is no reason for me to keep this app since I could just use Slidebox to organize my photos since it’s a smoother organization process, without having to pay $5-$20 to trash them. Smh. Initially did like this app, but super bitter after today.
By delalunas

I should have known better than to purchase anything ever again from this company.

Customer service has been responsive, but the links and instructions do not work. Hmmm, why would a company make it so difficult to get a refund or find the setting not to auto renew?
By Wilder.ness

I love taking pictures, but end up with thousands of images to review. I am amazed at the ability of this app to find similar photos and choose what it thinks is the best to keep. It’s easy to review sets of images and choose those to delete. Great tool.
By debljes

saves you time and regulates your sanity. now you can finally print those pictures you’ve been wanting to, without the daunting task of going through and deleting the ones that have no purpose.
By sierra @samsara_healing

Do not start “Free” Trial

This is a scam! If you start the Free Trial, there is currently no way to cancel it and they will charge you. Their customer service - wink wink - repeatedly told me to cancel it from my Subscription page and I repeatedly told them it wasn’t there. Finally, they admitted that their billing system is “separate” from Apple’s, but still didn’t say they would cancel it, but instead offered me a half price deal - for an app I didn’t want! Now I’m stuck having to dispute the charge coming on my credit card. This has been a ridiculous waste of time!
By Roostafish

This app from the moment I downloaded it was looking pretty nice. Then the moment I got into a folder to start deleting a prompt appeared asking for me to sign up for a membership in order to delete stuff. Even for as little as 1 thing which is ridiculous. Yes its a free app but unless your willing to pay right after the download completes the app is useless.
By 9th_Athanos

I know for sure I have duplicate photos on my iPhone, I was looking around today for a photo and there were numerous ones. Well after downloading your app, it said there was no duplicate photos. Thus the 1 star.
By Mr. 1956