SnapCalc does the math for you. Just snap a picture of a math problem, and voila — the answer is displayed on your screen. From algebra to calculus, the app has solutions to a wide range of topics - and it recognizes handwritten problems too! Learn more quickly and easily with step-by-step explanations so that next time you'll be able to solve the problem yourself - as easy as one-two-three! SnapCalc will be your mathematical lifesaver - finish your homework faster, prepare better for tests, and make getting those high grades less stressful. Not so strong in math or need some extra help with it sometimes? SnapCalc is just for you. SnapCalc is always here to help: Handwritten problem? No worries - SnapCalc recognizes both handwritten problems as well as printed ones. Just snap a problem or upload one from your photo gallery. Want to see the steps too? SnapCalc provides both straight answers and the corresponding step-by-step solutions. Need some training before a test? Check your math skills with SnapCalc's Quizzes and challenge yourself for even better results! Prefer to study math without a teacher? Learn about various math topics with educational YouTube videos and Wikipedia articles. Want to review an old problem? SnapCalc will save your results in the "History" tab so you can go back to them anytime. Solve math problems instantly across a wide range of topics, ranging from Arithmetic to Calculus. Math is hard - but with SnapCalc, it's never been easier. Get SnapCalc Premium Upgrade to Premium version and get step-by-step solutions and remove ads. *Choose from 2 subscription options: - a 1-month Subscription - an annual subscription with a 3-day free trial * Subscription payments will be charged to your iTunes account at confirmation of your purchase and upon commencement of each renewal term. * You can cancel the subscription anytime by canceling your subscription through your iTunes account settings. This must be done 24 hours before the end of subscription period to avoid being charged. The cancellation will take effect the day after the last day of the current subscription period, and you will be downgraded to the free service. For complete access to all SnapCalc features, you will need to allow access to the following: *Camera – so that the app could recognize a math problem after taking a pic and then solve it. Privacy Policy: http://apalon.com/privacy_policy.html California Privacy Notice: https://apalon.com/privacy_policy.html#h EULA: http://www.apalon.com/terms_of_use.html AdChoices: http://www.apalon.com/privacy_policy.html#4 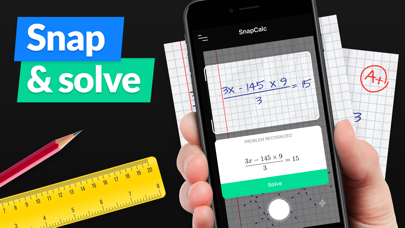 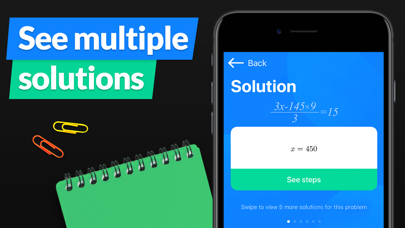 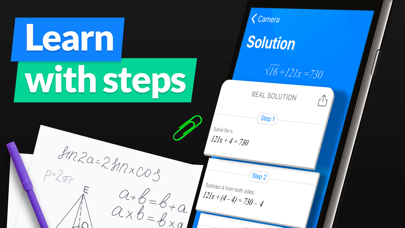 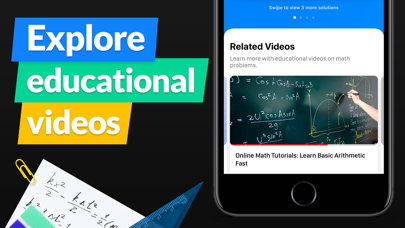 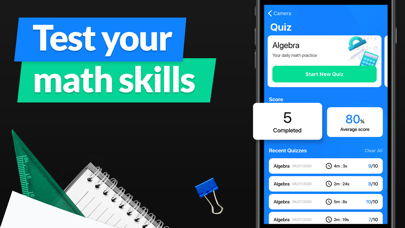 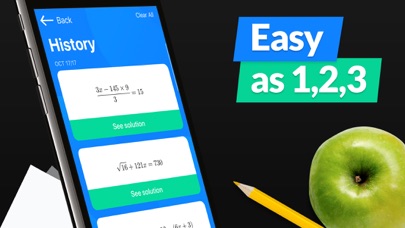 Cant even solve a math problem without need a subscription for it and then if i try to take the picture of the problem I'm on. , the button doesn't even work
By fjxkfkfks

I just downloaded it and then as soon as one pic it didn’t recognize the equation. So I tried a couple more times and nothing, but what didn't fail was the app telling me to get premium. I'm not going to spend money on something that won't work.
By madaline rogers

I like it it works really well.
By hklndnk

Useless and not worth the money they charge you weekly despite not using it.
By I.Guesss

It only let me do three problems!!!!

You have to buy subscription. And it only let me do three problems before telling me I have to pay to solve the rest of the problems
By flyfalcon0

It is not a good app to use for math

It is good helper but I don’t like how it makes you pay.it would be better if you did not have to pay for everything.
By rhosnei

This is awesome would recommend
By lil fjf