Get ready to jump into action and show the Kingdom who’s the real boss in the best tower defense game 2021! Face empires of mighty enemies. Clash against supreme bosses, unlocking and switching to new towers. Train legendary heroes and get all the achievements using your strategy in this amazing TD game. Kingdom Rush Vengeance will give you hours and hours of gameplay in the best tower defense game available! Heroes, your Army, Enemies and legendary td bossfights! - 13 Powerful HEROES who will, without hesitation, rush into action at your command - LEVEL UP YOUR HEROES and upgrade their abilities - 10+ TRINKETS AND ARTEFACTS for that extra action in battle. - NEW POWERS AND REINFORCEMENTS to vanquish your foes, td style! - 30 UPGRADES to train your army to their best form. - 60+ DEADLY ENEMIES that will put all of your wit and strategic skills to the test - RUSH TO SAVE THE KINGDOM as you bring down 6 mighty bosses in the most legendary boss fights! Epic Selection of Towers and Upgrades - 18 NEW TOWERS to defend your kingdom - UNIQUE ABILITIES AND SPECIAL POWER for every tower - Choose your arsenal of towers and execute your strategy. Create devastating combinations of towers, abilities and special powers to stop your enemies! Near Endless Tower Defense Gameplay - 25 CHALLENGING STAGES that will test your skills - 5 DIFFERENT REALMS to conquer and explore - EXPLORE new lands in the Kingdom - 60+ ACHIEVEMENTS, hidden secrets, and fun stuff for you to play and discover while you explore the realm! - UNLOCK HEROIC AND IRON CHALLENGES on all stages - CASUAL, NORMAL, VETERAN OR IMPOSSIBLE difficulty for every level - Summon enemy waves faster to earn additional gold Time for some Royal Vengeance in the Kingdom! Vez’nan, the powerful almighty wizard has returned. Lead your powerful dark army and make the Kingdom tremble with each step. Help Vez’nan conquer new lands in the kingdom! Orcs, goblins, demons, dark knights, zombies and many more! Choose your favorites and mix them to find the most deadly tower defense combination - secure the crown of the kingdom for Vez’nan. Awesome Offline Tower Defense Game No Wi-Fi at your Dark Tower? - PLAY ANYWHERE - playing offline works, if your wifi doesn’t - PLAY OFFLINE - no internet connection required - You can play Kingdom Rush Vengeance as your offline TD game of choice. -------------------------------------------------- HEARD ON THE MEDIA: "For veteran Kingdom Rush players and newcomers alike, the charm and strategy of the franchise remains with Kingdom Rush: Vengeance, making it one of the best mobile games of 2018!" -Polygon "Kingdom Rush Vengeance is the biggest and baddest the series has been." -148Apps "Players with any affinity for tower-defense games are going to enjoy every second they spend with Kingdom Rush Vengeance!" -Pocket gamer "The game is intensely engaging with a light-hearted tone that makes it a real pleasure to jump into." -Pocket tactics Get Lord Vez’nan’s latest news here: https://www.kingdomrushvengeance.com/ Terms and Conditions: https://www.ironhidegames.com/TermsOfService Privacy Policy: https://www.ironhidegames.com/PrivacyPolicy Video creators, podcast creators, and streamers: We would love to see your content on Youtube and Twitch! We support and promote channel creators so, if you want us to showcase your videos or want to know more about our games, feel free to write to us to contact@ironhidegames.com 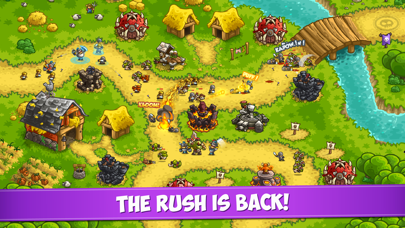 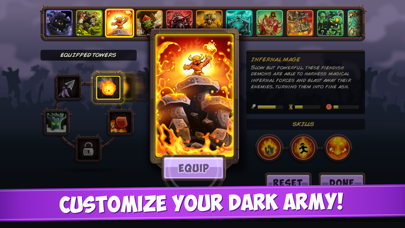 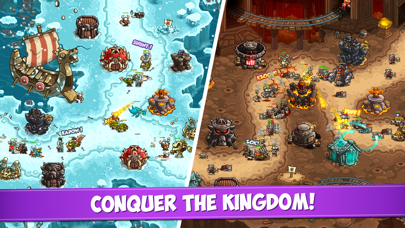 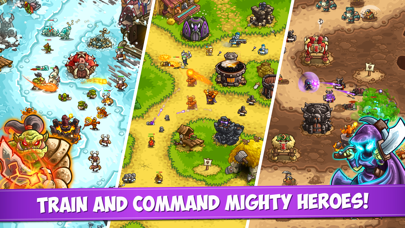 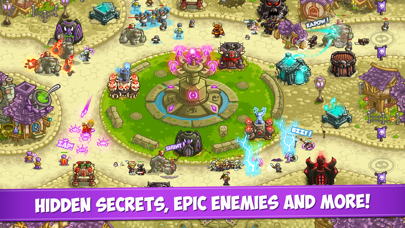 I loved this game to death, but the time came where i had to delete it, and so i did hoping that my apple ID would atleast keep the saved files, i was wrong horribly wrong. I spent some money on this game and its all gone, i bought the 2020 Halloween bundle expecting it to comeback via a restore purchase bundle, and yet there was none, i was confused and now i feel dumb, i lost it forever, i am greatly disappointed as unlike the others this one has no restore purchases. How? Why? Im honestly feeling regret for deleting this, if i knew this would happen I would’ve never deleted it :(
By Auz The God

Every time you launch this app is takes pastes from your clipboard. So if you just copy and pasted a password a few minutes ago. Maybe message or some other private data and then launch this game. It copys that and does who knows what with it. There’s absolutely no reason for a game to grab your clipboard every time its opened. Apple should ban the app until they remove this.
By Randile

this is a good game, but premium contents such as towers should be sold in lower price
By VN destiny

This game is rigged and is a great tower defense but it’s a pay to win game.
By tiddles_420

Played the original Kingdom Rush when I was in elementary, but now I am in college and still playing playing all of Iron Hide Studio's awesome games. Call me cliché, but I want another part soon where the good guys make their comeback. Playing as the villains not as fun as playing as the good guys. Lots of tower variety.
By SamuraiNinjaRockStar

I wrote a really long review about this game that I love but my device glitched before I could send it so all of that was erased and I’m not doing this all over again so I’m just going to say the things you should add 1. A bestiary for quick and easy to understand information. 2. More former enemy turned ally towers. For instance the savage tribesmen, the saurians, the pink aliens from the jungle, the dune raiders from the desert, the ghosts soldiers that served lord Blackburn, the trolls(non mercenary’s i might add), and Etc. 3. Since you added elven houses and hammerhold in the map campaign’s against them are in order. And finally what’s with the giant eyeball!😱 I don’t know what’s with that thing but I hope you take my ideas to heart. P.S sorry for the short review but I did not what to write that all over again.
By R.JF

I wish it were longer! Also, I played the first KR, and I loved it. This one seems a little off though... like the towers don’t “feel” as powerful. They have pros and cons in an attempt to make them seem more interesting and for more variety, but there was no solid fun combination that I could find. Also, I enjoyed having the option to specialize towers into two different trees. That was cool. Each served a unique purpose. The towers in this game, it seems like it’s hard to tell how they are different from each other. Odd, I know. Also! One BIG gripe I have. The flipping vines that grow up on the towers. I absolutely hate it. It is sooo frustrating on my I Phone. When I tap on the tower to get rid of the vines, the screen moves and I miss the purchase axe button. There must be a way to make the vines more fun, but in their current state, they are absolutely abysmal and not fun. It’s still an over all good game! It looks great. The story is fun, and the Easter eggs are funny. The hero’s in this one are cool too. You could add random encounters on the map as you progress. This would help with the length of the game. Add endless mode? On any level? I didn’t see that anywhere. There were unused areas on the map too. That was a bummer. Just needs more content.
By BSDudeMan

Prolly my fav tower defense of all time
By Garg77

Love the game so much but...

In my opinion this game is one of the greatest games I have ever played. But when I first got it it was pretty expensive. It was like 3 or 5 dollars. But that's all I wanted to say, this game is great and I really like it.
By flippy guy16476

So compared to all the other Kingdom Rush games, this one changed a bunch of things. Most not for the better plus you get nickel and dimed more by having not only heroes for sale but new towers as well. Stick to earlier games, pass on this one.
By Gamerkitty