Our global coverage offers distinctive insight and incisive analysis. Start your 7-day free trial now.* Each week over 1.5m subscribers trust The Economist to help them make sense of the world and the news. Join them by downloading The Economist app. The app includes a daily selection of the best of our journalism, along with the full weekly version of The Economist newspaper to read or listen to on the go. Already a subscriber to The Economist? Simply install the app and sign in with your Economist login details. The Economist is an award-winning, trusted filter on global affairs, offering in-depth analysis of everything from business, finance and politics to science, technology and economics. It covers every region of the world including the United States, Britain, Europe, Asia and Latin America and it excels at big topics, from climate change and sustainability to the future of work and globalisation. The Economist is also available as a weekly magazine. App highlights: • Top stories: the latest news analysis combined with highlights from the weekly issue • Economist The World in Brief: a short morning briefing on the day’s global news • The Economist weekly edition: full access to the weekly version of The Economist newspaper • The audio version of the weekly edition to listen to on the go • A selection of our podcasts, including The Intelligence, a daily burst of illumination from The Economist’s worldwide network of correspondents App features: • A morning briefing on the day ahead • Timely analysis of the world’s biggest news stories, updated by the end of the day • The weekly edition available from 9 pm every Thursday evening London time • Audio versions of the weekly edition read by professional broadcasters • Reading times highlighted on each article • Bookmarks to save articles for later or create personal reading lists Subscribing in-app • Subscribe in-app and take advantage of our introductory subscription offer • Subscribe in-app and take advantage of our 7-day free trial • At the end of the trial, the subscription will automatically renew onto a monthly subscription at the standard price. Annual and quarterly subscriptions are also available in some regions • You will be charged in your local currency at the prevailing exchange rate as defined by Apple. Payment is charges to your iTunes account upon confirmation of purchase • All subscriptions automatically renew. Your account will be charges 24 hours before the renewal date, at a cost of £19.99/$19.99/€24.99 for a monthly subscription • Full terms of use can be found at https://www.economist.com/legal/terms-of-use • Our privacy policy can be found at https://www.economist.com/privacy 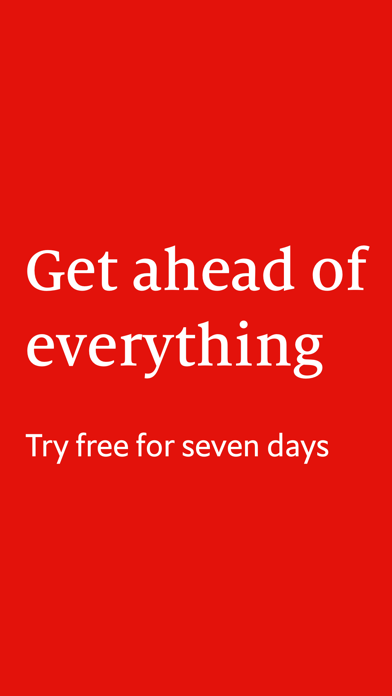 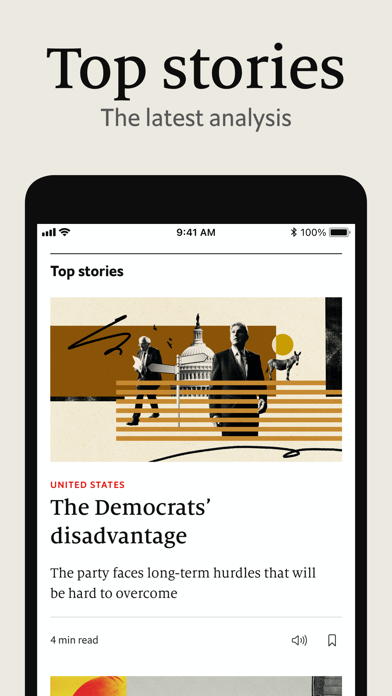 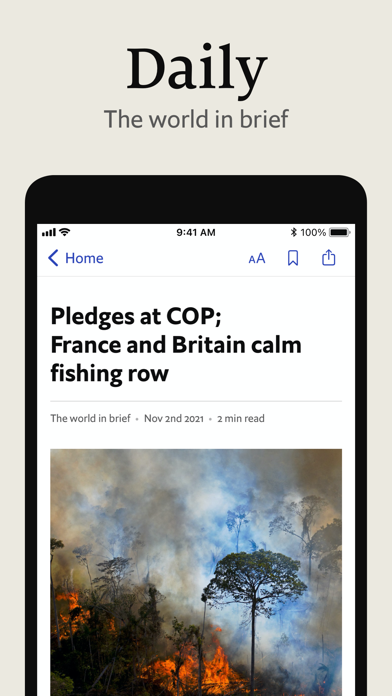 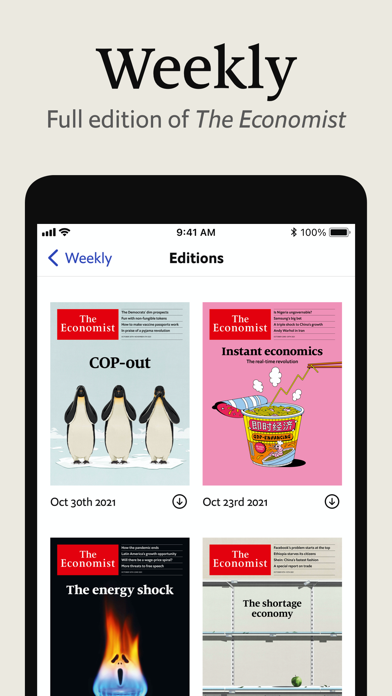 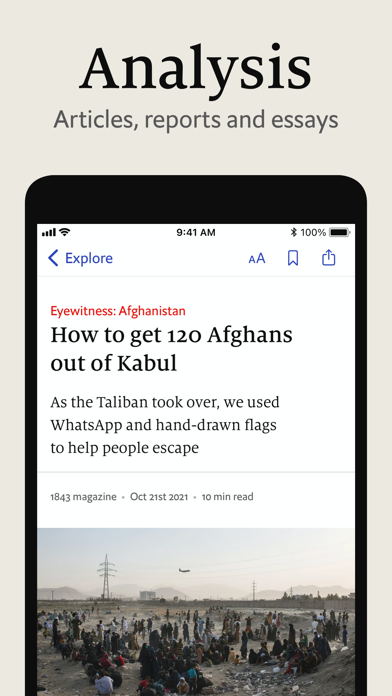 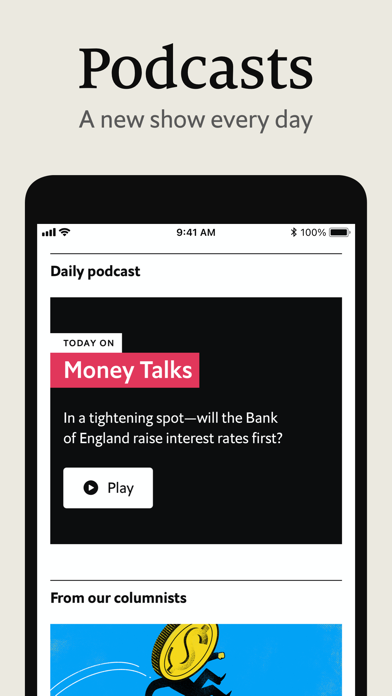 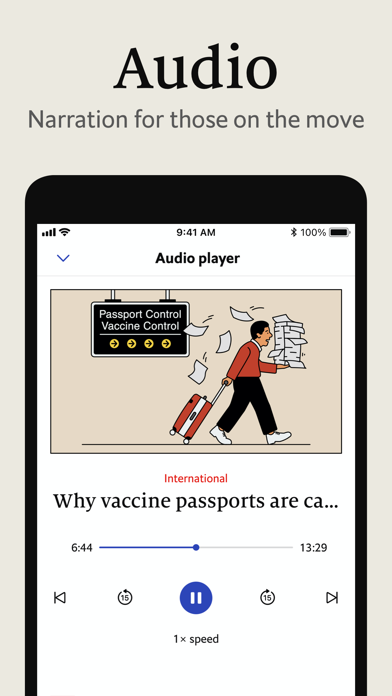 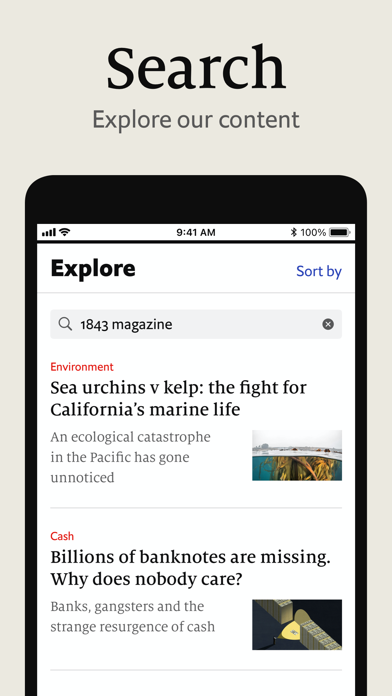 The Economist continues to provide informative and positive writing on the state of the world economy as it relates to science and technology, health, education, the environment, social policy, travel, tourism, and more. Helps keep me up to date in current events in a thought provoking way.
By VHKW

The economist is the worst. I just bought a year long subscription and it auto renews for a higher price and it won’t let me stop the auto renew!
By Dookie Doo 2

Miss being able to easily select the audio articles I want. Have in the order of the magazine. App is major step backwards.
By JR5312

I enjoy the range of topics covered in The Economist’s journalism, and the app is quite usable, but it would greatly benefit from a few extra features: - Cross-device synchronization of the read indicator. It’s great to see at a glance whether I’ve already read an article, but it only works if I happened to read the article on the same device. I like to read on both my iPad and my phone. - A dark theme with lower contrast. The best implementations of “dark mode” in apps use color palettes that are easier on the eyes than the sheer white-on-black here (see Duolingo, for example). - Page-flipping as an alternative to scrolling, a la Books or Kindle. A tap every so often is easier than constant swiping across the screen. Otherwise, I’m looking forward to my continued enjoyment of the magazine.
By dgmul

Content is excellent, although creeping towards “government is the solution.” Customer service has fallen way off. No means to get tech support for digital problems or suggest improvement (e.g., no longer can create playlist for articles in audio edition as we could for years heretofore).
By L Singer

One of the slowest and buggiest apps I’ve ever used. Why does it take minutes to start playing an audio clip when it’s already downloaded to flash memory? Why does it quit when playing for more than 10 minutes? This app needs a ground-up native rewrite.
By revmischa

I am teaching a high school economics class and The Economist is always used as a reference in my lectures. I love that is takes a world view and is not biased
By palehua5

The app used to be atrocious. I mean, it basically worked, and it was better than nothing, but it was a really poor user experience. They’ve since cleaned it up, fixed some bugs causing it to crash, and recently introduced some new UI features. But there are a couple things I would like to see. #1, if you see an economist ad on Facebook and click the link, it’ll not take you to the app. Instead you have to click the “open in browser” button. Even then it locks it behind a paywall when I have the app installed and I am logged in. Any other app (especially social media apps) give you a banner to “open in app”. I don’t want to log into the mobile site to access an article. There’s also a bug I’ve been getting where I open an article and the text is all glitched out - there’s maybe a word or two on the page and then nothing below that. One last thing, it’s mainly quality of life: Sometimes I’ll have already read an article, and then I get a push notification suggesting I read the article. Perhaps you could keep track of whether I’ve read an article before pushing out that notification? One last thing, and again it’s quality of life: it would be nice to be able to manage my subscription in-app. Most of these are smaller points, and the app has come a long way. Kudos to the developers.
By Nois88

Content is 10/10 but the App Design is 1/10 The audio player reading the articles never works.
By Hugb

The Economist (Legacy) US

The Economist (Legacy) US Tab