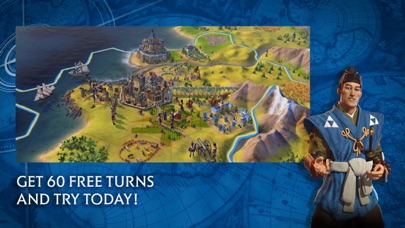 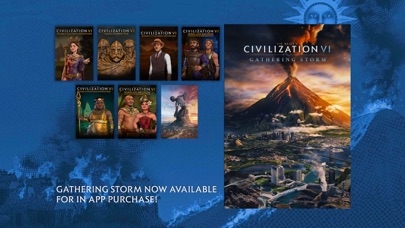 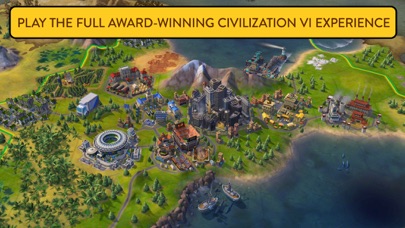 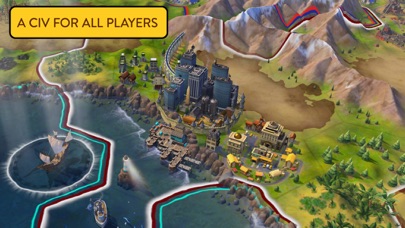 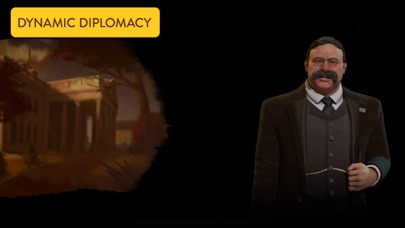 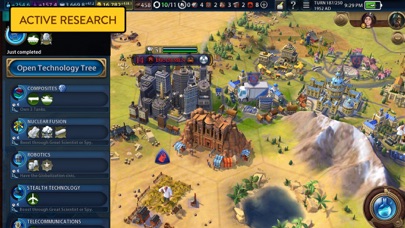 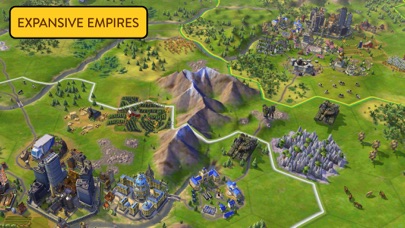 One bug but amazing

On my iPad air 2, this game constantly crashes. I can only get about 40% into a game (200 turns) and it becomes impossible to continue. The game is a lot of fun but I want to play, not constantly restart. I cannot recommend this game at this point.
By Wantfitbit

Great game, but I have some suggestions. Please read! 😊😝

I love this game! It has so many options and is a great way to pass time. (I played 2 hours straight and didn’t know it. Lol!) the graphics are beautiful and the game is fun, considering it is kinda like an RPG type game. I have some suggestions though. 1. Multiplayer can work from different devices and you can have multiple settings, with different people or with someone you know. You could hook up a game by sending an invite to your friends via text or email. 2. There are hundreds of countries out there that don’t have any mention in Civilization VI. Examples are Denmark or Java, or many more. 3. It would be nice that you didn’t have to pay extra money, on top of the $60. Other than that, I would really recommend this game to anyone! It’s with the $60, down to every last cent.
By gamecools

Add Portugal, and Babylon Also Byzantines And Republic Of Texas And When Frontier Pass Coming?

Portugal And Babylon HAS To Come To The Game. It Would Be Fun To See Them Return (Byzantines and Texas TOO) BTW Add A Plague System To Storm When’s Frontier Pass Coming
By Rusmerica

The devs do not care about multiplayer

I have spent over $120 on this game with all the DLC. If you’re looking for a great single player 4X game, this is a great choice. If you’re looking to play multiplayer, don’t bother with this. I’m not sure the devs even played through the multiplayer. If they had spent even a few hours with it, most of the issues I’ve come across could have been avoided. 1.) NO IN-GAME MESSENGER OR CHAT: Not even a rudimentary message inbox. This is absurd. Unless I meet the person I’m playing in person or on another website BEFORE we start our game, I have no way of communicating with them. What this means is that if I match with someone in the lobby and get a game going, I can never even ask them for their email or if they want to play another game when that one is over. I can’t communicate with them when the servers are down (like right at this moment and every time an update is released). This is very bad business. It is rare to find people that play this game. I only know 1 other person in real life. Making friends with the people you match with should be easy. The other problem with not having a multiplayer chat is that it takes away a large part of the game. Diplomacy, trades, and politicking are all so interesting and dynamic when you can chat about it. Without discussion, playing another person is just like playing the AI- limited to what’s on the screen. Even mobile games like risk have had a chat since like 2005... and that game costs like $4. 2.) NO NOTIFICATIONS: Sure, a little exclamation point will appear next to a game when it’s your turn (usually). What good does that do? I have to load into the game to see it. This is a MOBILE GAME. How is there not a way to turn on notifications to my phone? Again, something most other free and cheap apps and games offer that this $120 one doesn’t. 3.) RELEASING PATCHES AT DIFFERENT TIMES ON DIFFERENT PLATFORMS: This one also makes no sense. You know you have a game where people play cross-platform. I would venture to say MOST games played are cross platform. So, why would you release a new patch for some of those users and not others? This breaks every current game. I don’t have any community created mods or anything in any of my multiplayer games, because you can’t do that on mobile. That means that my vanilla multiplayer games should continue to work despite updates. Well, that’s assuming they update all platforms at the same time. They didn’t. PC users got an update while Mac and iOS users are still on the old patch. What this means is, even though the new New Frontier patch shouldn’t even affect mobile users (as it isn’t available to us yet), it has broken every single multiplayer game. When I first got this game, I thought I would be a life-long franchise fan because I loves the gameplay so much. If these things aren’t addressed, however, I’ll never buy another game from the Civilization franchise, 2K, or Firaxis. You shouldn’t release a multiplayer game if you don’t want to make one (which they clearly didn’t- it’s obvious almost all of the testing went into single-player). If you do, you have to go about things differently than with a strictly single player game (like waiting until New Frontier Pass and the new patch was ready for ALL players). Also, maybe don’t release your game for free on Epic the same week a new patch comes out. It was obvious there were going to be issues (there always is with every update). To throw in a bunch of new free users, and then go on a holiday weekend is ridiculous. Game has been unplayable for days now, and you’re probably not working on it again until Tuesday. Ugh. I just wish this franchise cared about us as much as we love the game.
By CherrySigler

In the title it’s price is free but after completing the basic tutorial it makes you pay for the full version.
By Ian Wylf

This app consistently glitches on my iPad pro that I bought a week ago. How do I get a refund? This app doesn’t work properly. I can’t fly a jet without the whole thing crashing.
By lsdjfkljaflsdf

I got an iPad Pro 2020 and this game is running at a terrible resolution with very poor frame rate (20 at best) even at the start of the game. No video settings that I can modify. Would definitely buy if the game was at least a bit optimized
By ceramdolphin

Game Freezes constantly when you attack with jet bombers. I even submitted to Aspyr games and got an automated email back and nothing fixed. I read other reviews saying it freezes when dropping a nuclear device.
By Mcadamsq