Your opinions are valuable. Now get paid to share them with the Google Opinion Rewards app. How it works: You answer quick surveys and get paid up to $1 for each completed survey via your PayPal account. Surveys typically take less than 20 seconds. Easy to use: You'll receive a notification when a short survey is waiting for you. These surveys include everything from opinion surveys to hotel and product reviews to location-based merchant satisfaction surveys. Your privacy: When you take a survey using Google Opinion Rewards, your answers are aggregated and shared with the market researcher who wrote the survey questions. Unless otherwise explicitly stated at the beginning of the survey, as is the case with location-based surveys, these answers are completely anonymous and not linked to any of your personally identifiable information. In exchange, we provide you, the user, money that is deposited into your linked PayPal account. For more information regarding the privacy of your survey responses, see the Google Privacy Policy https://www.google.com/intl/en/policies/privacy/. 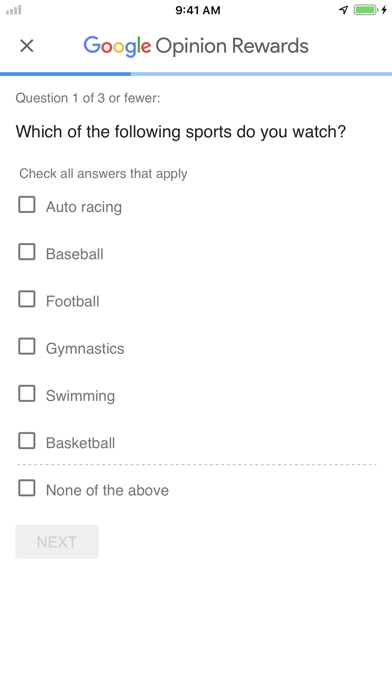 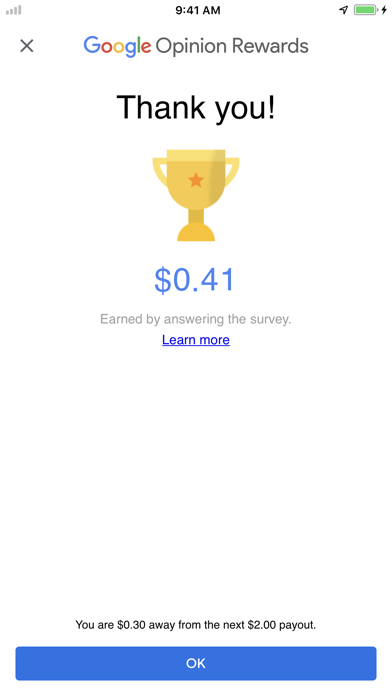 barely any surveys come up... every once in a while. It took me like 3 months to earn just 2 dollars. But it actually gave me my money so this is legit just requires ALOT OF PATIENCE
By paperio2222222

This app wasn’t bad when I first used it. Recommended plenty of surveys at the beginning but then it tapered off. Haven’t had a survey pop up in a couple of months so... *delete
By BigBaldLarry

Got payed immediately
By luke pat

It really does work, it only pays you 2, or a little over $2, but hey, it adds up and you just answer a few questions. The money deposits into my PayPal account that same day it cashes me out. ☺️
By Em16447

Haven’t received a survey in 6 months
By DÆRKÑÉŚŠ

This app is a scam. I’ve had it for around a month now and have in gotten 2 surveys and gotten around .20 cents. It’s not worth your time. The feedback is useless and doesn’t help you at all.
By Caleb_378

This app helps me a lot when I run out of money. This is recommended for a teenager that don’t have money.
By its_kingboy