Have you ever wanted to build a gaming PC but didn't want to go through the hassle of buying components and unpacking boxes? Wouldn't the whole process be easier if you could just select your parts from a table and slot them into place with few taps? No, I'm not talking about using a custom pre-built service. The answer is PC Building Simulator, available now for download on App Store!! The purpose of this game is to try to teach people about building PCs while still having fun. All the components have realistic look and placement! If you’ve never built a PC but have wondered about the magical parts you can see through the perspex window your PC mystifyingly came with, this’ll help explain. Maybe it’ll give you confidence to build a real PC! 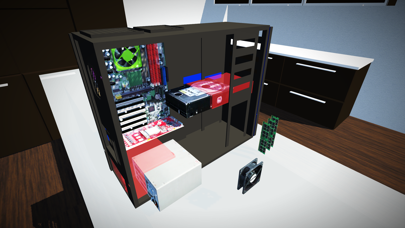 How do you wire it together?, and also I would like to know the rest of the game, Why is it so hard?, is there any step after Adding the motherboard, Fan, RAM, etc
By Username1625

This is possibly the worst Game I’ve ever played in my life this isn’t even a simulation it’s drag this here it’s horrible it doesn’t teach you how to build a PC instead of simulation see pews are not pre-built.your supposed to put The motherboard in once you have everything you can possibly fit on the motherboard .this is just the beginning if you want more reasons just look at the rest of the reviews
By jeremy winch

If your going to play now what to do

This game has NA education

I don’t get the point of the game u just built a pc None of the parts are named so this game is so unprofessional no education what so ever the controls are extremely bad u pretty much put a CPU on with no thermal paste like what the hell bro but over all the graphics are not bad but not good ether and so many ads (sorry for bad grammar ;) )
By y3eL3TH4Ly3e

The graphics are awesome and the principle of learning is spot on. However app needs a little more improvements pertain to actually being able through the app to place the cpu,RAM, Harddrive in the correct spot. Need to go off the design principles from snap on gear head garage and actually have a c+++ program code to where you can emplement the big and small screws required to assemble CPU. Also that version your organization would probably have to charge for the app which is very understandable. This version should be a trial version to see if pc techs like it down to educators. That CPU should take a tech maybe 25 to 30 minutes to build taking their sweet time. Until the apps bugs are fixed it the solution for now should be for students to learn hands on like I had to. I have an Associates Degree in Applied Sciences and my major was Computer Electronics Engineering Technology. If you want my credentials please email me and I will tell you what college I attended and maybe I can help you out with the solution. Thank you hope to hear from you soon.
By David big dave

Why just one level??

This app is overall interesting, to say the least. What really aggravates me is that there's only 1 level and there isn't even a 'completed' screen!
By Dandyboi_YT

Cool but there could be more of a variety

There should be options to pick out own parts
By Draziw.

This game is noting like the Pc version just god awful. There’s no story, the mechanics are so bad the make enjoying the game impossible. And then they have the nerve to have an in app purchase to remove the ads. How about we fix the game before you try charging someone for this broken game
By D polo

This is total crap

What a rip off!! I assume it's one pc to build. 7 components to install. Nothing after that?! I actually paid to have ads turned off before I started. The moron that created this should be sued!!
By Az85710