The fastest way for Actors Access Plus members to submit themselves to Casting. Use the app to get an edge over the competition. Features • Role Match Alerts: Immediate push notifications for roles that match your profile • Unlimited and instant submissions: Quickly select your desired role, your media, and submit • Review and confirm auditions Payment Information: Monthly subscriptions will be charged to your credit card through your iTunes account. Your subscription will automatically renew unless auto-renewal is turned off at least 24-hours prior to the end of the current period. You can manage your subscription, and auto-renewal may be turned off through iTunes or the iTunes Store Manage Subscription page. Terms of Service and Privacy policy: https://actorsaccess.com/termsofservice.html 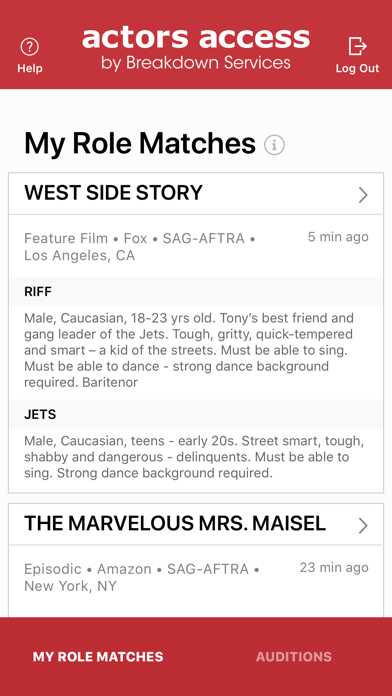 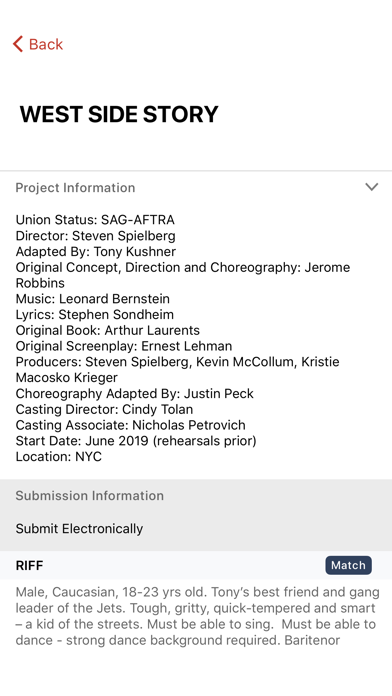 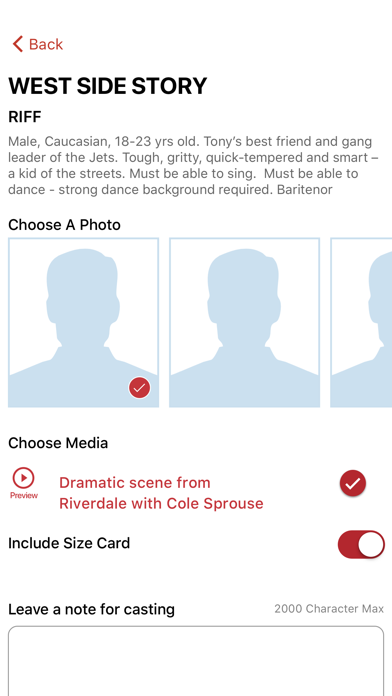 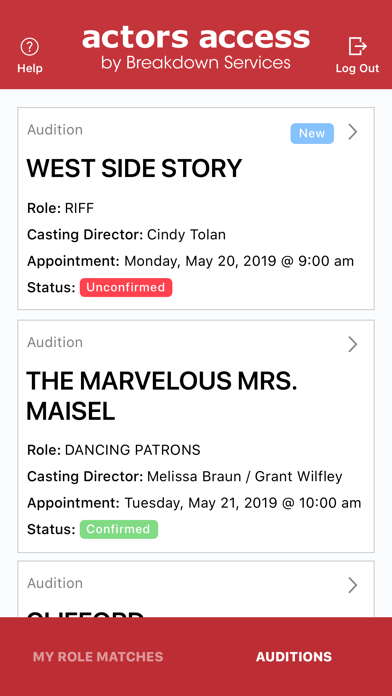 I have been trying to get ANYTHING on the app to come in. ALL I GET is “you have no roles that match”. Bilirubin when I log in through internet and NOT the app it works correctly. I have called (no bother there) I have emailed 10 times (no reply there). The app is as useless as it gets. It used to work fine, I guess they have no intention on resolving the issue or contacting me about it. SHAME ON YOU.
By edward Olsen

So, this app has been out for 4 years and they still don’t have CMail or EcoCast? Everything on this app is mostly okay, but not being able to just view and respond to CMail is HUGE! Why is it only if you have scheduled auditions? I would love this app 10x more if I could simply view CMail and eco cast so I can read breakdowns of self-tapes and the sides on the fly. That’s been a fundamental part of Actors Access for years.
By ReidEmmons

As someone else noticed, you have to go into you profile settings to get the notifications. Something was changed a few months ago so I had to redo them. But it's working now. Not really a five-star app. The last star is a pity star. I still don't really like Actors Access because you have to pay every time you want to upload a new picture. But some CDs like it for some reason. [It used to work but hasn’t sent me any new breakdowns in months, though my profile is complete. I have to look in Safari. Actors Access is really expensive (after you pay for each little picture or video you upload) so this is ridiculous.]
By fridrix fridrix

I love this app, it’s easy to use and seems updated .People just don’t know how great there services are and how amazing their part is to us actors and other media outlets..
By Alan Almonte

When I saw AA had released an app I was so happy! Instead of logging on and off to view auditions and requests, I could sign into the app and have all the information there. WRONG There’s no access to cmail. If you have an agent or manager they send you cmails where you receive audition requests and the information that goes along with the breakdown. These audition requests never show up in the “auditions” tab. Which is all the app has. I don’t know why, but they don’t. So the fact that the app doesn’t have cmail means for actors who aren’t self submitting, you can’t do anything in the app. You can only submit yourself and see self submit auditions there. Pretty big let down. If they added cmail, it would CHANGE THE GAME.
By Peg-leg Pete

Potential to be great.

1. The mobile website shows jobs for which I’m qualified 2. The mobile iOS app shows nothing. Disappointed. However, very willing to test it again, when this bug is fixed.
By Jono in Georgia

Neee help or an update or I’ll probably delete app

I just started using actors access on my computer and I love it! The app is weird though... can’t find my profile, nothing will load...
By louieshoe

I was disappointed to find out that the only roles I was being notified of were the ones for self-submission. I wish it would also alert me of auditions I receive through C-Mail that my agent has submitted me for and that a CD has requested a submission. Add this feature...and it’s five stars...easy.
By Madman74

The audition part doesn’t work on the app. I still have log in on my laptop to view an audition...
By deija12345

It tells me to fill out my profile so it can show me breakdowns which I’ve already done and it won’t show my auditions either. I hate using the website.... an app would be much easier but this app doesn’t do anything
By emmabelle125