Mass Effect: Andromeda APEX HQ Can’t put down Mass Effect: Andromeda’s multiplayer? Whether you’re playing from Earth or elsewhere, stay connected to your game with APEX HQ. Customize your characters before a match, command Strike Team missions for in-game rewards, check your stats, connect with friends, and more. It’s another great way to experience a vast galaxy while you fight for a new home. PREPARE FOR BATTLE Be ready for every multiplayer match, every time. Select which character to play, then swap their weapons, mods, and equipment to create the perfect character loadout on-the-go. Even spend skill points to progress the abilities you’ll need most. COMMAND YOUR STRIKE TEAMS Enlist powerful Strike Teams and direct them in perilous missions within APEX HQ. Recruit more teams as you play to complete additional missions simultaneously and receive in-game rewards with every victory! SEE YOUR STATS How do you rank with players across the world? Check your standings in global leaderboards and see how you compare with friends. View your inventory of unlocked items and what you’re still searching for. STAY CONNECTED Ensure you’re up-to-date on the latest news, future updates, features, and more. View new missions, their associated rewards, and find out when they expire. Receive alerts when your friends are playing, when fresh content is available, or when inventory is unlocked. Requires acceptance of EA’s Privacy & Cookie Policy and User Agreement User Agreement: terms.ea.com 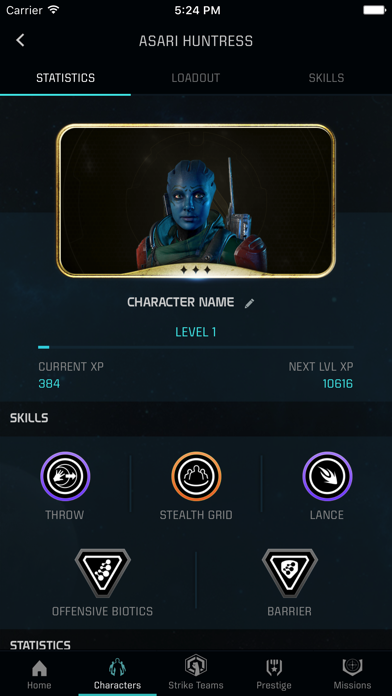 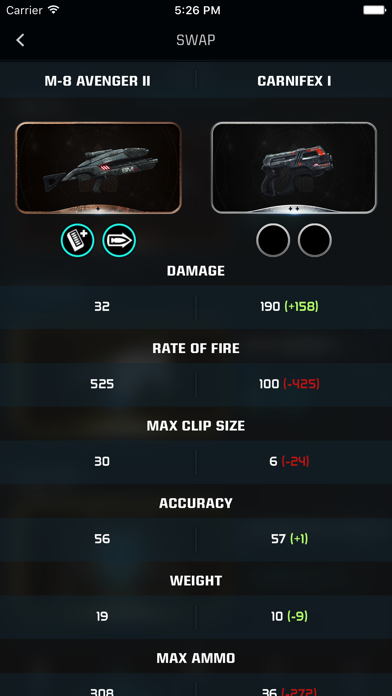 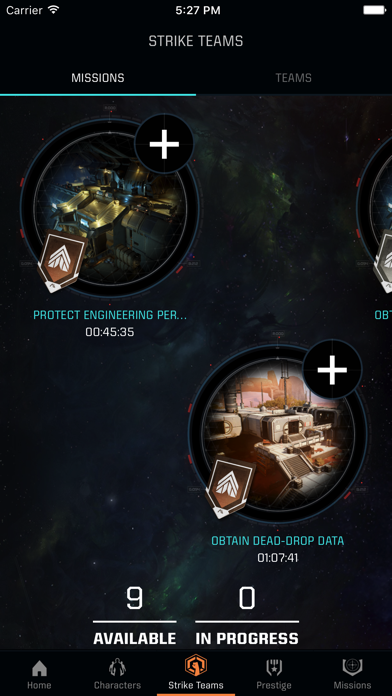 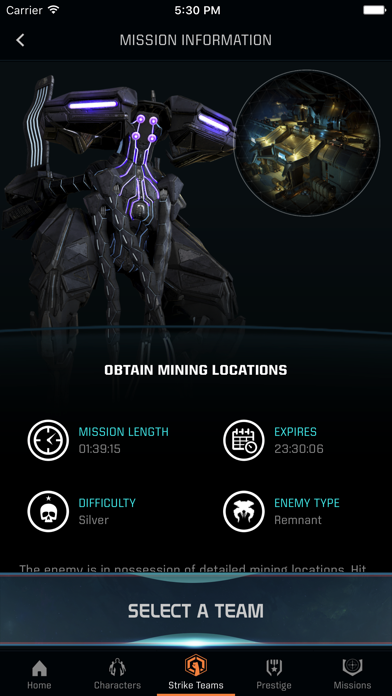 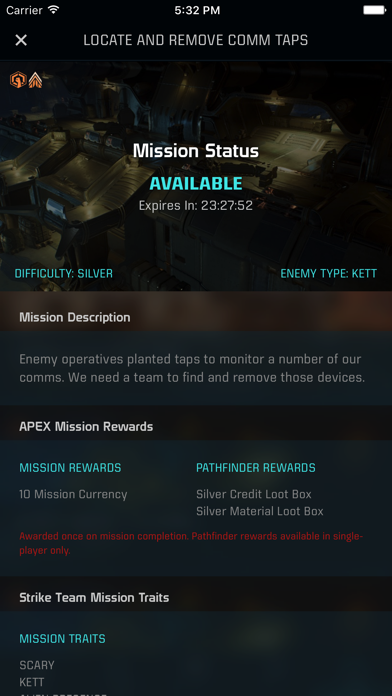 I downloaded the app to stay on top of my strike teams. In that regard, the app is great, but there nothing else to do unless you play multiplayer (which I do not). I feel like they could have done a better job of including ALL of their user base, not just the online players.
By Whatwhatitsme

This app does what it says it does. I love Andromeda, and this app really helps add to the experience.
By jonnycake9

I can now manage strike teams from anywhere. That is awesome.
By Mark Vanderloo

Wish ME3 had this.

I liked the game, wasn’t my favorite but I still play it all the time. Multiplayer really isn’t my thing but this app helps me not have to play it so much to unlock better gear on single player. The four stars are because it’s buggy and wasn’t I guess the achievement thing... but if you don’t have all the achievements by this point why are you getting the app?
By 20questions

I appreciate it when a developer goes out of their way to make an additional, free companion app to enhance my gaming experience. Thank you very, very much. From the app I can send strike teams (ST’s) out on APEX missions and they’ll bring back loot for me to open in game, earn me in game currency, and gradually increase my APEX score. I can also purchase and equip upgrades, gear, or even other ST’s as well as multiplayer loot boxes with in game currency. It lists all of the multiplayer characters I have unlocked so far and lets me look at and upgrade their skill trees. I find this aspect particularly helpful as I like to browse a character’s entire skill set and plan exactly how I want to optimize them before spending any points. It also lets me change my current weapon load out and mods. A note about others’ reviews: It’s a shame how jaded the gaming community is that people are docking stars on this free additional content for things like trophies. A lot of the other things people said about the ST menu being buried is just false. It’s a single button push to get to the ST menu. Another person said that you don’t get to preview abilities before you upgrade them. Also just false. The point is that developers don’t even have to offer companion apps or any other additional content and if spoiled gamers are going to leave bad reviews because they didn’t even take time to learn how to navigate the app, they’re just stupid, and companies will stop making stuff like this if we’re unappreciative a-holes. This isn’t meant to be anything other than a tool to help gamers and make it convenient to browse your multiplayer progress and send out ST’s. It does the job it’s meant to do and it does it well. Again, thank you devs.
By

You took an amazing scifi rpg game and tried to turn it into the next cod. Sacrificing story for a multiplayer shooter to try and rake in the money for loot chests. This app is a key example. Mainly focusing on the crappy multiplayer experience with a crappy laggy app. I bought the collectors edition with the season pass. That was a rip off. I will never buy a game you make again. This app is a waste.
By Skunk Vendetta

Broken for my purposes

I downloaded this app to manage my strike teams while I'm not playing on the X1 and, for the most part, it works well. There's just one BIG problem - this companion all breaks achievements! There are achievements for getting six squads and leveling a squad to 20. If you do them in the app, it doesn't unlock the achievement. This means you would have to sell a squad, rebuy it (on the console) and level a different squad up. A small oversight that makes the app more damaging than helpful, at least for what I care about.
By Crlaozwyn

Update: Update 1.17 has added the rank for weapon variants in your collection (in the list view). The newer maps Nimbus and Vertigo have also been added to the map challenges. This has turned out to be a pretty great companion app to an arguably underwhelming game. The game's quality is hotly debated, but I've been a Mass Effect fan for quite a while, and I was a pretty devoted ME3 player, first with single player then heavily into the multiplayer. One thing I always felt was missing from the ME3MP experience was a companion app. It was a little annoying having to navigate to the N7HQ website and log in just to check progress. Thankfully we get that app here for Andromeda. This app is handy for me because I am always deploying strike teams and I actually prefer to do so from the app versus the game (the game can be sluggish in the strike team menu). I also enjoy tracking my challenges and my collection as I go, planning what to tackle next. The leaderboards are a fun way to keep an eye on your and your friends' APEX and Challenge scores too. This app seems to track everything that the game tracks, and in many cases it's just as easy or easier to find. I got this app as soon as I heard about it, a day or two after it came out. Back then, it had some bugs, a lot of log in/out problems (e.g. having to log in each time I opened the app), and some frequent crashes. They have really improved it in the four months or so it has been out. The log in issues are still present, but not nearly as rampant. As the type of person who remembers my passwords and emails, I don't have a problem logging in once a week or so. I also keep private browsing on in my browser even though the app developers warn against doing that because it will cause issues with keeping you logged in, so maybe that is the issue for some users. It does not bother me. The crashes seem to have mostly stopped. Occasionally, it crashes as soon as I launch it, then I have to open and log in. The crash frequency seems to vary by user. It doesn't happen often enough to bother me though. The game currently features three variants for most (if not all) of the uncommon and rarer weapons, and while the app has the Weapon Variants collection, if you purchase a pack in the app that contains a weapon variant, it does not correctly display the weapon in the pack. It shows the picture, but the text displayed looks like code ([string]110974[/string] showed where one of the weapon's names should have been). Fixed in 1.17: Along that same line, in the collection of Weapon Variants, it doesn't show the rank of the weapon until you select that weapon, but it shows the rank for all other items (regular weapons, characters, mods, etc) in the list view. It appears that this is just a game feature that the app hasn't caught up to yet. Fixed in 1.17: The only other issue I have right now is that since they've added the two newest maps, Nimbus and Vertigo, the Map Mastery challenges for them are there, but there is no text for them; they are blank challenge entries. I'm sure this is just an issue of the app not having caught up with the game, so I expect this to be fixed fairly soon. All in all, it's a great companion app. It does what it needs to without too many hiccups and doesn't try to do unnecessary things (see the Destiny app and it's "More" tab). They've really come a long way with the app and it supports the multiplayer of the game very well!
By XxButch2000xX