Warhammer 40,000: The App All Your Rules in the Palm of Your Hand Warhammer 40,000: The App is designed to make your tabletop gaming experience as easy as possible. This means less time flicking through your book and more time rolling dice and playing the game you love! About The App This app is an invaluable tool for anyone who enjoys playing games of Warhammer 40,000. It provides you with a quick and easy way to check your rules in the heat of battle, browse codexes you own, and plan your next army. Features Core Rules Read the Core Rules in the app for free. Searchable Reference Find the rules you need when you need them. From datasheets to stratagems and weapons to special abilities – through this app, you can access every rule in Warhammer 40,000. Battle Forge The official Warhammer 40,000 army list creator that lets you plan your force on the go! And More! Look forward to improved functionality as we continue to grow the app's features. Terms & Conditions: https://www.games-workshop.com/wh40k-terms-conditions 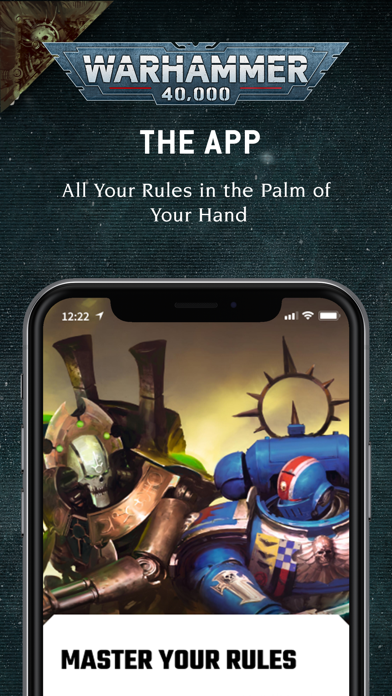 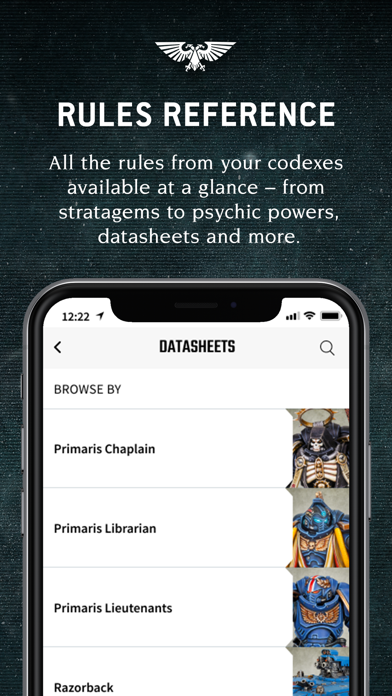 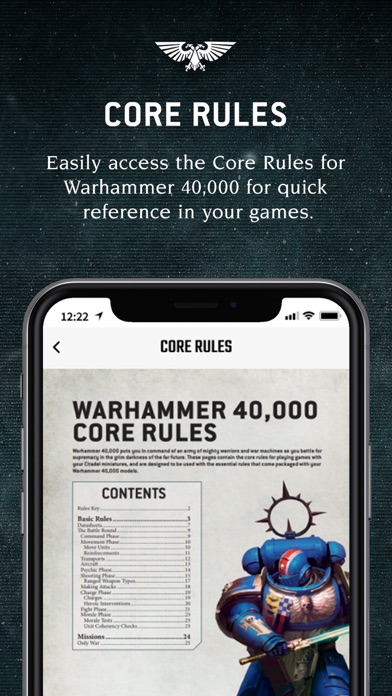 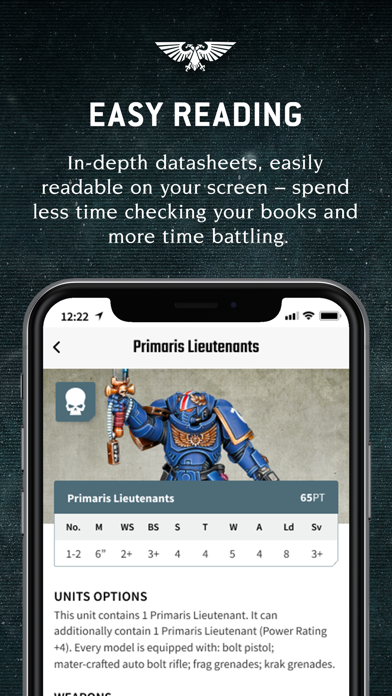 The app lacks the ability to do basic math, and will randomly change your army point values based on how it feels that day. Please use a calculator to double check the math, almost got removed from a tournament because of this. Other then that, works great. Easy to navigate, having info on demand is key
By Hamstersoup

Why does it cost money

Why does it cost money it’s just reference and when you say continue for free theirs no point of continuing for free cause everything costs money.
By e6vf@

Very Happy and Excited For the Grim Dark Future!!!

I never thought this day would come. Honestly, GW developing an app was a hopeful dream after digging through FAQs and ERRATA for so long. Once this app was announced, I thought I was being TOO wishful to think they would update the app along with the FAQs and ERRATA, yet low and behold, the app is right in line with the current FAQs. In my eyes, everything has been a success so far. Thank you GW!! The updates they have mentioned is enough to keep me subscribed, as long as GW is DILIGENT with there updates, and COMMUNICATES any issues they are experience with there subscribers, this app will do very well. Update: Since the Balance Dataslate Dropped and the update to the app rolled out 11.17.2021, this app has been amazing. Thank you for updated GW Team!
By Xeildor

App can’t seem to generate correct points or even understand the rules that are baked into the game. Half the time I use it the values don’t add up or the list shows invalid. God forbid you have a conditional unit…the error will never go away.
By Tikiboom

Not enough attention to details

The Black Templars unit options don’t work on release, the rules references are nice but squad building is generally broken.
By eric_slc

Why is so hard

Whatever you’re trying to do this app goes out of its way to make it more difficult. New rules and you redeem the book look in your app nope, no new book. Finally get the book installed, where the book is divided up for different armies, nope the app just sticks all the stratagems for all the armies together for example the WarZone’s. Chapter approved rules in every new book to play the games mission secondaries aren’t even in the app. This app is hot garbage.
By Vrealmonkey

Where is the iPad support?

Let’s be honest. Why would I want to read the rules on my iPhone.
By f1rxf1y

Too many bugs that shouldn’t exist

Want to work on 2 army lists? Too bad, this app cannot figure out that your second list has nothing to do with the point total in the first list. It’s ridiculous that you can charge for a subscription on something that doesn’t work properly. Seriously, I know college students who are learning coding that don’t make mistakes I’ve seen.
By Nuclear Spy

Doesn’t contain all the rules and stratagems. Even if you own a given factions codex. The army list builder straight up can’t calculate points. Which is insane, because it’s just addition and subtraction. How do you screw that up? I don’t understand why games workshop shows such constant an unwavering contempt for its customers and fans. It really is an endless source of disappointment. The app does have all the basic game rules and data sheets though. So I have to give it that. Does nothing else that it advertises though.
By Dhabi knlingon

Warhammer: Visions - the monthly magazine from the creators of White Dwarf