Welcome to Wildscapes! Create your dream zoo with dozens of adorable animals by solving colorful puzzles! Build spacious enclosures for animals and make your zoo visitor-friendly with cafes, fountains, playgrounds, hangout spots, and more! Learn about species from all over the world and create the best zoo ever! Ready for a wild ride? Then hop on! GAME FEATURES: ● Enjoy your favorite gameplay: beat match-3 levels to restore the zoo! ● Match juicy and fruity items to complete unique tasks and win rewards ● Unlock more areas to welcome new animals from different habitats ● Play with custom options to design your zoo the way you want ● Decorate your zoo with unique objects from around the world ● Power up your gaming experience with the help of special animal boosters ● Complete tasks for zoo visitors by helping them with their specific needs and wants ● Bring together whole families of animals to get even more rewards! Wildscapes is free to play, though some in-game items can also be purchased for real money. If you don't want to use this feature, simply turn off the purchase option in your device's «Restrictions» menu. Enjoying Wildscapes? Learn more about the game! Facebook: https://www.facebook.com/WildscapesPlayrix/ Instagram: https://www.instagram.com/wildscapes_game/ Twitter: https://twitter.com/WildscapesGame Questions? Contact our Tech Support at wildscapes@playrix.com 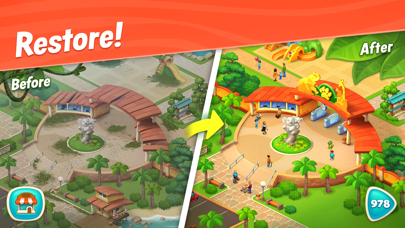 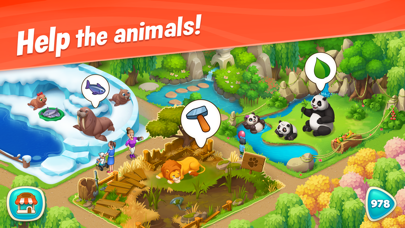 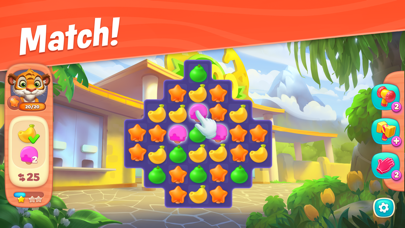 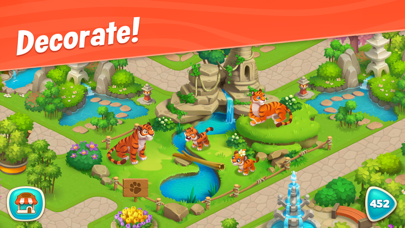 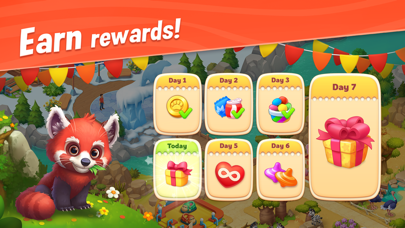 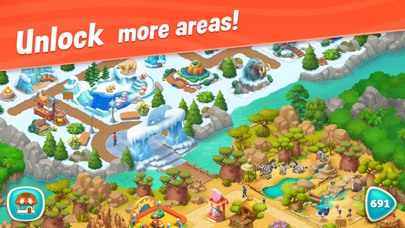 A nice variation on Playrix’s other match 3 games but this one has lots of bugs, with games often crashing within a few moves of winning (after spending gems, too, of course).
By SEH1986

1 bad thing... the levels are super hard and sometimes not fair. Like one time I was about to beat a level, and I used a hammer to get it, and all it did was make me lose. But otherwise, great game. You should download it. (It’s sometimes challenging!)
By BrookieyCookiey

One of my Favorite Games!

The best games are those you can play for HOURS, if you have the time, or a few minutes, if you don’t. This is one of those games! I had been playing Gardenscapes on & off for a few years before this game was released - although the concept is the same, everything else is different. It’s a great change of pace without sacrificing any of the gameplay & details I love about their other games. No need to spend money...like EVER. Unless you want to of course. This has definitely become one of my go-to games!
By MSonoda

This game keeps me calm and relaxed
By luna the aussie

Unreasonably hard. Making u feel like a loser all the time
By KnightOfTheDark

The best out of the series...BUT

Updating again, I’m now giving this game one star due to frequent freezing. Man, I am getting through a really difficult level and I was 2 moves away from winning this particular level when the game froze on me...again. The freezing is more and more frequent now. The only thing that resets it is turning your phone off and back on or deleting the app and uploading again, both of which restart your level over. I was so p...ed off I almost threw my phone across the room. Not cool!! Updating my review of this game again and dropping another star. I’ve gotten really far, I’m now on the other island of the zoo on level 1113 and I’ve done so without paying a penny. The glitches are getting worse. I can no longer use the flying top bonus items and when I pick them they float off the screen every single game! What’s the point of even having them available as a bonus item?? I’ve also noticed freezing in my games this past week, it’s happened twice. I’ll literally be in the middle of a puzzle challenge and it will freeze and won’t restart. I’ve exited out of the app and gone back in hours later and it’s still frozen. The only thing that works is if I turn my phone off and restart it, but then it voids my life on that game and I have to start a new one. Super upsetting, especially if I’ve had some good moves or used my bonuses, cause then it’s lost! Updating my review and dropping a star due to a glitch in the system when trying to use bonus items. I’ve noticed that when trying to use bonus items on some puzzles the items don’t appear and when I go to play the next game the bonus item is gone from my list. So today I’m playing a particularly hard level and decide I’ll use a bonus when I see the bonus items go to drop on the puzzle they float off to the top of the screen and they’re gone for good. What a waste! Couldn’t imagine if I was paying for these items and they disappeared like that. I still love the game but you need to fix that cause it’s super annoying and unfair. Original review: This is by far the best out of the Scape series and I have thoroughly enjoyed it. Yes, it’s one of those cash grabber games, but per the negative reviews that say you can’t pass certain levels without buying more stuff, I’m here to say that’s not true. There have been a quite few levels that I thought were way too difficult to beat and I almost gave up and deleted the app! I’m glad I stuck around cause I eventually did beat them. I’m on level 285 right now and have gotten this far without putting any money into the game. I absolutely love building my zoo, the animals and scenery are so pleasant and I like to go around and watch the people and animals I have so far. Right now I’m almost done building my polar area. I got bored with gardenscapes as I felt there was not enough forward momentum on building my garden, having to pass too many difficult levels just to do one thing and nothing to show for it. Plus too many side games and I’d get confused on what exactly my goal was cause my garden was going nowhere. I also tried homescapes, that was even more boring than the garden one and I just couldn’t get into it enough to be concerned about what color chair or carpet to choose for a room. Unfortunately, I will say the further you go the more expensive the animals and other items for your zoo get (another cash grabbing attempt). But that’s how these free phone games are, you either have to watch ads or have games that tempt you to buy more things for quick upgrades. If you don’t like that then stick to PC and console games. Wildscapes is where it’s at!
By Jbgood75

It’s very calming and fun! It can get hard but that’s kinda the point it’s super detailed and graphics are good I’ve had no problems like glitches or freezes or anything so far good !!👍🏻👍🏻
By jojo siwa fans go crazy 2345

This is the best match-3 around. I love organizing the zoo, and the levels aren’t too easy so you actually have to strategize to win many of them, and there’s no annoying side plot or character taking up your game time. I’m currently on 618 and have never been this stuck until now. I agree with another reviewer that the animal genders are ridiculous (girl animals don’t need to be dainty with pink bows), and the people in the zoo are pretty stereotypical (ex: blonde girl obsessed with selfies). Please make it easier to get more lives, as some of us don’t have Facebook. That’s the only thing about Gardenscapes that is better. Other than that, I’m your number one fan.
By qwerty zoo