** Welcome Word Streak players! Word Streak is now Boggle With Friends!** Bring the fun of family game night with you on the go with the Boggle With Friends game. This new take on the classic board game from Hasbro is loaded with fun new modes, daily challenges, and puzzling twists! Challenge your friends, family, or new opponents to spell out the most words before the clock runs out in two minutes! Want to boost your word search game? Train on your own in solo play against the Coach to test your word skills in a three-round match of wits. Got a competitive streak? Compete in live head-to-head tournaments and lightning fast single round tournaments to show off your puzzle solving skills and earn rewards along the way. Join the fun and download Boggle With Friends today! CREATE A MATCH It all starts here! Challenge an opponent to three rounds of fun to see who can find the most words, score the most points and emerge victorious. COMPLETE DAILY & WEEKLY CHALLENGES Brand new challenges are updated daily, as well as weekly. Play to win sweet rewards! TRAIN IN SOLO PLAY Test and improve your word smarts in solo mode! Challenge yourself against the Coach in three rounds which get harder as you move up. COMPETE IN LIVE TOURNAMENTS Go head-to-head with friends, family and new opponents in live tournaments and advance through lightning rounds with lots of bonus tiles! COLLECT DAILY PRIZES Win a daily bonus with prizes and power-ups! Play each day to get better rewards. PLAY OFFLINE Play anytime, anywhere, even offline 24/7. AVAILABLE IN 9 LANGUAGES Choose your language and start a game in Spanish, French, German, Italian, Dutch, Danish, Swedish, Turkish, and English. Download Boggle With Friends for a word search experience you can’t put down! Additional Information The game is free to play; however, in-app purchases are available for additional content and in-game currency. BOGGLE is a trademark of Hasbro and is used with permission. © 2018 Hasbro. All Rights Reserved. Licensed by Hasbro. 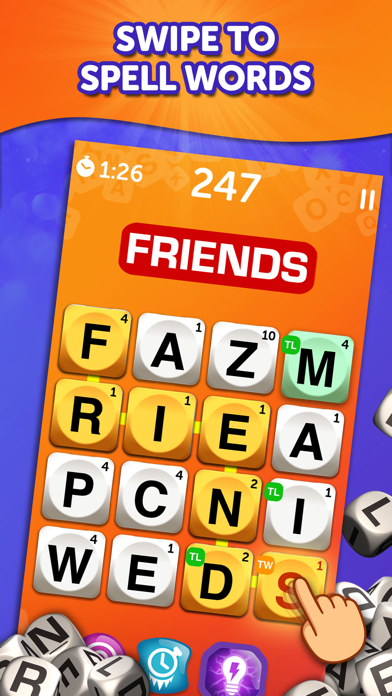 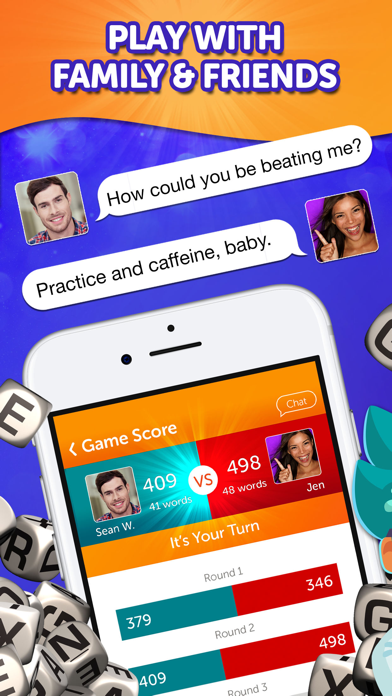 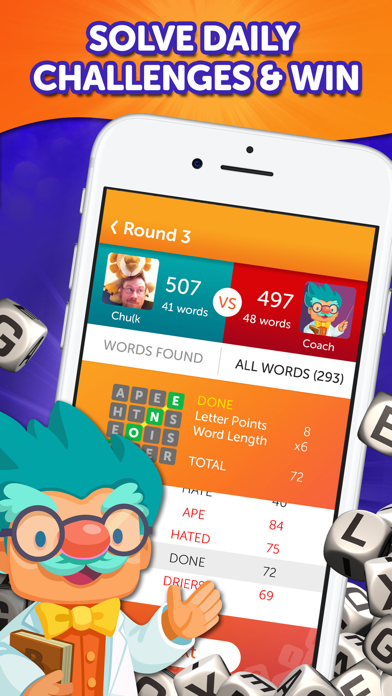 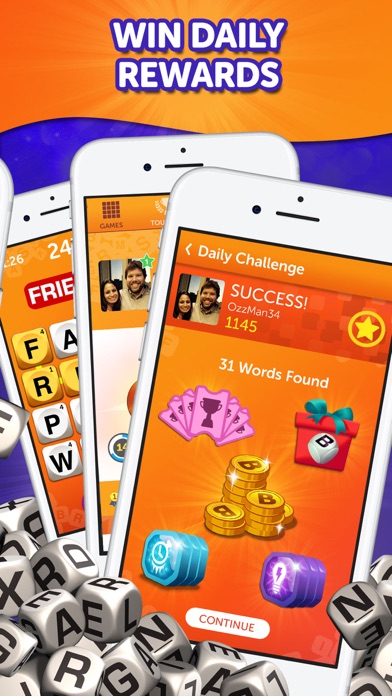 I used to love this game, but it’s been getting pretty bad over the last year. Words that are real words are no longer allowed, such as rape and any words associated with it. The bonus is a joke as it won’t let you get the mega bonus, even if you log in every 12 hours…you can get up to it, and then it just skips it and jumps back to zero, and the tickets are a joke and worthless, especially since you are often playing the head to head matches against robots or people who use so many bonuses it takes forever. The auto matches are not equal as it will pair you will anyone, not based on skill or experience.
By qqwrtuigfhkhf

Used to love it

This app is fun if you like Boggle , but its awful if you dont like being knocked of the game constantly. Ive had the app for over a year and have consistently shared my frustrations with it frequently dropping me from the game in head to head and tournament modes. When contacting “customer service”, they usually blow you off with an auto reply and given multiple choices options for the manner of your complaint, none of which have anything to do with your actual problem. I persisted to contact them about 75% of time this happened to me, most often met with trite apologies saying they are “working hard to fix it”. Well its been over a year now and its actually only gotten worse. They have a pay system for tokens , (which I never would pay real money for these games n would advise you against it too), but you can also earn as you play and win games & tournaments. This includes tickets earned as well for tournament rounds. They also offer “power ups” that are basically cheats for the game and its not really fair if one player uses these power ups against a player who does not. So when you get booted out of the game for no apparent reason, you lose your tokens, you lose your power ups that you earned to use and you lose your tickets and your place in tournament mode. No coincidence that I was most often bumped out of tournament mode in the final round that earns you more in-game rewards. I began to contact them every time I got booted off and inquired to be reimbursed for tokens, tickets and power ups. A couple times decent reps would compensate minimally and informed me they could see how often this was happening from their end of the program. Eventually, after I persisted to share my frustration each time this happened and inquired about their reward system, they ignored addressing anything and said they would no longer reply to me regarding these issues. No accountability, no concern, no sincerity and now no answer. I think a year is enough time to give them to “fix the bug” and I was more than patient. Admittedly, my constant contact was to have them share in the frustration because I would not give up. They have no interest in fixing anything, no interest in making anything fair for a frequent penalized player within the bounds of their own reward system and showed how sincere they were (not) but now not bothering to even reply anymore for their problematic app. I dont recommend this product and highly would advise against giving them ANY money or connecting your payment information to such a bottom of the barrel app that has no accountability and no class. I was never inappropriate or verbally abusive towards their customer service, they just got fed up with the truth and me consistently holding them accountable. Trash app, trash customer service, BEWARE
By Nutropis

The most annoying ad-filled app ever!

The app is just an ad scam. Every game you play is followed but a 30 sec add that you can’t avoid, other than by closing the app. No way to avoid the ads, no paid or premium version. Ap had promise but it is just an AP for infomercials. Total scam. Don’t waste your phone space on this.
By kalahari7

Playing in the tournaments is frustrating. The ads pop up and play out, the screen goes black and you can’t advance to the next round or even see if, and when you win.
By Kelly Back Pack

Boggle is a great game. You have ruined it by force starting games for players with strangers ….without their consent. Yes, you do give an option to tap on “ok’, but it isn’t really an option because players do not have the option to choose ‘no’ or ‘not ok’. Just get rid of the ‘Searching for player’ or opponent nonsense. Worst idea ever. This has been one of my favorite games for many years. Game deleted. (I may check now and then in the future to see if you’ve gotten rid of that feature)
By Stelynquin

Crashes All the time !!!
By pckcn

I love this game!!!
By DJStillnice

Boggle operating on its own.

This game is not going well lately - it keeps creating games without me doing anything! Please make it stop!
By Katrinket

UPDATE: As of 7/27/22, this app still completely freezes my iPad. I’m surprised Apple allows such shoddy programming on the App Store. 7/As of 9/20/21 this game is completely frozen on my iPad. Boggle is a great game and when this app works, it’s an ok app. However, it crashes—A LOT. It seems to be updated on a regular basis, but the crashes don’t get better. Also, there are common words that the app does not recognize. I thought by 2021 developers would have figured out the dictionary thing. Oh well. I’ll keep playing and rebooting, I suppose... 11/15/22: Frozen solid.
By TomWa