The best Skins for five nights at freddy’s in Minecraft! FNAF Skins Edition for Minecraft PE (Pocket Edition) allows you to choose and apply a skin to your Minecraft character for free with just the touch of a button! There are many wonderful FNAF Skins to grab. Features: + Tons of FNAF Skins that you can use in your Minecraft PE & PC + Lots of skin categories (FNAF, Baby, and more) + East to find skins + Add skins to favorites + Save directly to your camera roll + Universal app Note: Not everything is free in this app, it requires IAP to unlock content. Disclaimer: This is an unofficial skin app for the game, Minecraft. This application is not affiliated in any way with Mojang AB. The Minecraft Name, the Minecraft Brand and the Minecraft Assets are all property of Mojang AB or their respectful owner. All rights reserved. 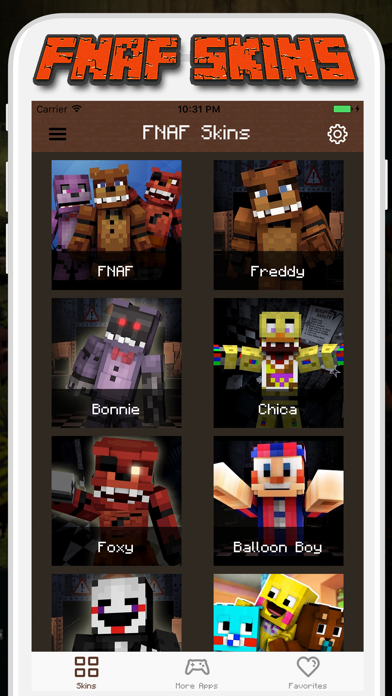 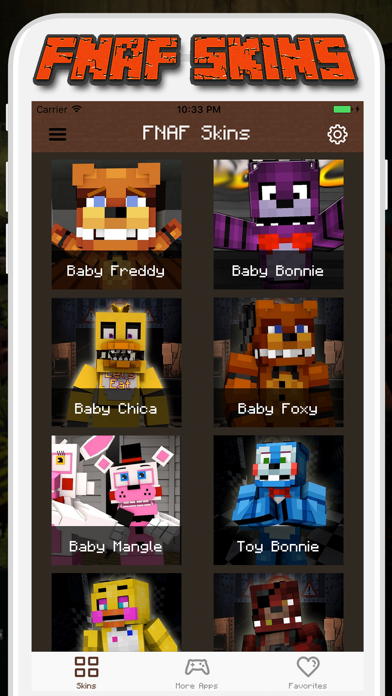 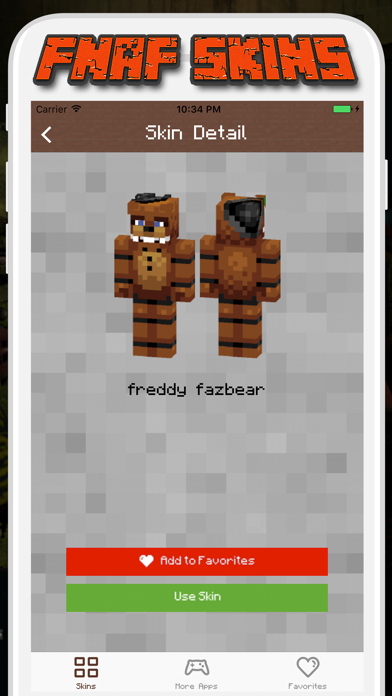 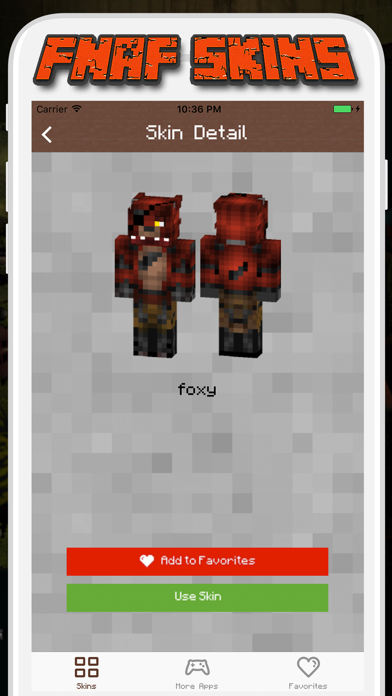 THIS IS ABSOLUTE GARBAGE!

I decided to be a FNAF character in Minecraft.. So I downloaded this app and was excited and downloaded some of the skins given on this app. I went in Minecraft to use the skin, but it said.. “That’s not a Minecraft skin silly”. You really need to fix this app because it absolute garbage and doesn’t work.
By Lyla Kellogg

i was trying to do a roplay with puppet but the skin kept saying; “thats not a skin, silly!” In Minecraft. It kept saying that even if I re-downloaded. Please fix
By phrosty1

It dose not work

It worked fine a while ago but now I go on Minecraft and it says “that’s not a Minecraft skin silly”.
By mase6179

One star! This is because I downloaded this and one of its skins. When I went to put the skin on it said it wasn’t a skin! I know I should be putting this review on Minecraft... but it’s your skin!
By fhvchhb

The skins are good, but when I go to Minecraft and try to click it to make it my skin, it says “This is not a skin silly!”. So please, fix this. Because I am a huge FNaF fan and I want to make a FNaF pizzeria in Minecraft. I guess I’m going to find a better app because this one can’t even make ACTUAL skins.
By BeachyD333

When I TRY TO USE IT AND STUFF IT SAYS THATS NOT A MINECRAFT SKIN SILLY THIS IS STUPID ITS TRASH!,!
By tophatsRdaBEST

Horrible! I tried to put a skin on and it was invisible! Also not to mention, When yOh go on the app it looks pretty good! Please fix this glitch! It would get you a lot more good reviews! From, ♥︎𝖤𝗀𝗀𝗌_𝖡𝖾𝗇𝖽𝗂𝖼𝗍♥︎
By SirenPlays192