Let’s join the LARGEST BID WHIST COMMUNITY in the world to play with thousands of online players! Bid Whist Plus offers you a great experience against many Bid Whist players from all around the world! You can play in many different game modes such as Classic, Solo, or Whist. Bid Whist is one of the traditional trick-taking card games played in pairs like Spades, but in this game players determine the Trump suit by bidding higher than others. ==BID WHIST PLUS FEATURES== ● FREE COINS Get 20,000 Free Coins as a “Welcome Bonus”, and get even more coins by collecting your “Daily Bonus” every day! ● DIFFERENT MODES Play Bid Whist however you want! CLASSIC: Make your bid with your partner and challenge other teams VIP: Play the classic Bid Whist in custom Tables. SOLO: There is no partnership. Each player gets his/her own points. WHIST: No one bids in Whist tables! Trump suit changes automatically in each round. ● GREAT SOCIAL EXPERIENCE Meet new people and add them as friends to be their best partner or challenge them in games! Use Public or Private Chat to stay in touch with other players. ● CREATE YOUR OWN TABLES You can create tables in different modes. Choose your “Game Rule” type, set the “Bet Amount” and the “Final Point” or decide if there will be “Faster Play” or “Chat” options. If you don’t want to be found, create your own “Private Table” where games are “Invite Only”. Additional information: * Make sure you have a good internet connection to get the best experience. * The game is free to play; however, in-app purchases are available for additional content and in-game currency. In-app purchases range from $0.99 to $99.99 USD. * Use of this application is governed by Zynga’s Terms of Service, found at www.zynga.com/legal/terms-of-service. ©2017 Zynga Inc. 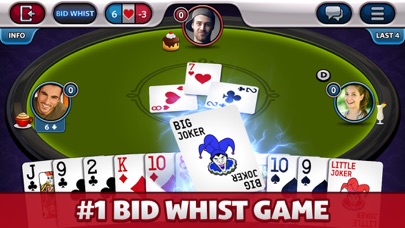 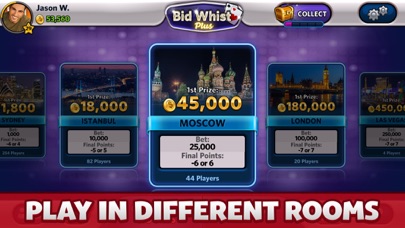 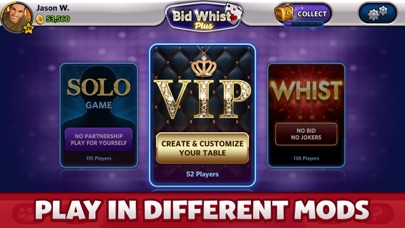 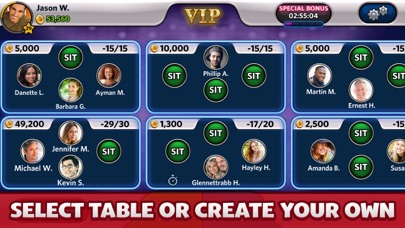 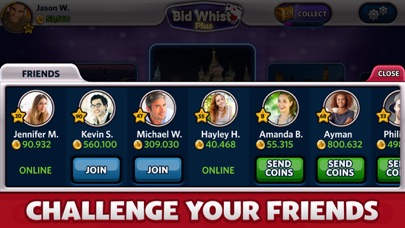 I am not being awarded my prizes for watching ads.

This is the 3rd time I’ve been invited to watch videos with the promise of receiving 5,000 coins. Well once I received only 1,000. Twice I received NOTHING!! If I watch the videos, I should receive the prize being offered!
By pastorbeegee

This App Needs To Closed Down

People is taking this game way too serious. Mental abuse and all is happening in this app. The developer just wants to make money. You can’t report the issues that is really happening. People are cheating of course, but you have some sore losers who get upset and say mean things. I am trying to get in touch with the better business bureau and Facebook to make them aware of this app. The cheating is not the problem it is when people lose they get upset and use derogatory comments and are very racist. Byron Morgan who has a lion roaring as his profile picture is very racist. I have reported to Facebook that his account is fake because this app won’t address the issue. It’s terrible because these coins are making people nuts. But you cannot spend them
By DZs Neauxts 4

The computer hates me

The game in general is a fun game, but for what reason I can’t get ANY trump 13 cards dealt to me and I get 1 trump I get lucky and can make 2-3 tricks. I could deal the cards 10 times with a deck of cards a never are they as bad as this computer deals cards so if you have high blood pressure play at your own risk. And have a big wallet that might help. Joezepey
By )oezepey

This is the best Bid Whist game that I’ve found. One of my complaints is the players seem to almost always leave the table when they get set, so there is a constant change of players from one hand to the next. I also do not like that I cannot see the bid that is on the table when it’s my turn to bid because the table is covered by the box that you record your bid in. So if you don’t catch the bids before your turn to bid, it’s impossible to know if you’re taking your partner’s bid out or not.
By kimsuesmith33

I have not ever landed on a high amount when I spend the wheel. I do love playing the game! Very addictive!
By Kscorp1

Love this game. The only draw back is that if you have a certain amount of money they FORCE you to play at higher bidding tables.😡😡 We should be able to play at whatever level we choose!! They make you run out of coins do you have to purchase more. Sometimes they give the option to watch 10 videos to get 30,000 coins. Other than that it's good.
By lele1061

The only problem is that this game is hacked and the hackers take over your hand and many points in the game and make you lose! I have lost thousands of coins due to hackers! It’s just that I love playing and continue to get hacked! Bev75
By Bevblackbeauty75

It is a very unfair game you can be on losing streaks for days at a time now all the tables under $ 10.000 have been replaced with high stakes tables. The maker just wants you to buy more coins for there profit
By biyzx

Love it
By mz bid whist

This game is totally rigged. The developer say the card dealing at random is dealt fairly. THEY ARE WRONG!!!! I have played several games and it’s hard to believe the opponents always are dealt a stronger than strong hand. I think they have in their program to monitor players and picking their favorite player to win consistently. I have even purchased points and lost over a million. In the past before they changed their version, I had over 17 million points. When I opened up my game the next day, I saw the new version game with minimum points (10,000). So what happened to my 17 mil. Also they changed the game format. BUYER BEWARE, SCAM DEVELOPER TO TAKE YOUR MONEY.
By bcdh19