Welcome to a world of horses and adventure! Groom horses, care for them and show them! Engage in some medieval jousting or role-play the Wild West. Ride motorcycles and camp out under the stars! You can play your way in Toca Life: Stable! EXPLORE AN EXCITING WORLD THE STABLE: Step into the stable and can care for your horses. Wash them, brush them, then saddle up for a trot. When you're finished grooming your horses (and cleaning up their poop!), take a well-deserved break in the club room. THE ARENA: Next, advance to the arena and show off your horse's jumping skills. Hear the cheers when the winners take their place on the podium. After the celebration, you can race motorcycles in the arena — vroom! — or get a snack in the food court. THE FOREST: Ready to frolic in the forest? Choose your most trusted horse and head off for an adventure in the woods, where you can sleep under the stars in your sleeping bag, then wake up for a swim in the waterfall. THE SHOP: When you need more horse tack, head over to the shop — you'll find everything you need. TRAVEL BETWEEN LOCATIONS Each location gives you access to the horse transport, so you can get your horses, equipment, bikes and even characters from here to there. Put what you want to move into the transport, close the door and select the new location by tapping an icon. Everything will arrive in the selected location so you can begin your next adventure! CREATE AN ORIGINAL VIDEO OF YOUR STORY Use the in-app recording feature to create an original video! This feature records your voice as you’re telling the story, along with your characters’ movements. Create videos up two minutes long and save them to your camera roll to share later! FEATURES: - Explore four locations: stable, arena, forest and shop. - Create stories for 24 new characters plus horses and other animals! - Care for your horses: feed them, lather them up till they're nice and clean, brush them. - Choose outfits from your favorite themes: medieval, western, everyday stable life and fantasy! - Hop on to ride bikes in the forest and race motorcycles in the arena! - Set up obstacles and show off your horse's jumping skills! - Eat at the food court and use the portable potties! - Have a campout! - Snuggle into your sleeping bag to stay warm under the stars! - Take a canoe ride or swim by a waterfall. - Make music with magical lily pads! - Move horses, characters and objects from here to there in the horse transport! - Record your stories in the app and share with your friends! - No time limit or high scores — play for as long as you like! - No third-party advertising WE LISTEN One of our top requests for the Toca Life series has been horses! So we made an app that's all about horses! What do you want to see next in the Toca Life series? Share your suggestions by submitting a review, or share them with @tocaboca on Instagram & YouTube! ABOUT TOCA BOCA At Toca Boca, we believe in the power of play to spark kids’ imaginations and help them learn about the world. We design our products from the kids' perspective to empower kids to be playful, to be creative and to be who they want to be. Our products include award-winning apps that have been downloaded more than 130 million times in 215 countries and offer fun, safe, open-ended play experiences. Learn more about Toca Boca and our products at tocaboca.com. PRIVACY POLICY Privacy is an issue that we take very seriously. To learn more about how we work with these matters, please read our privacy policy: http://tocaboca.com/privacy 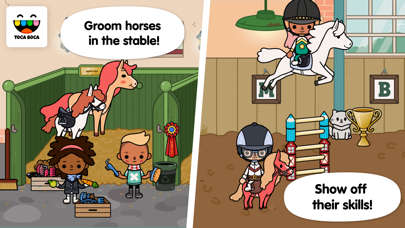 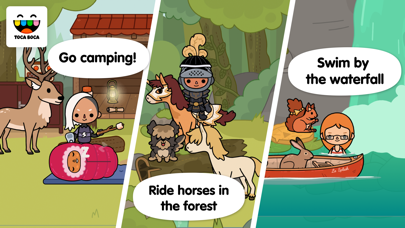 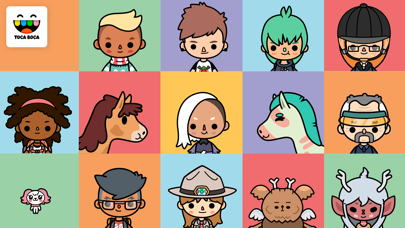 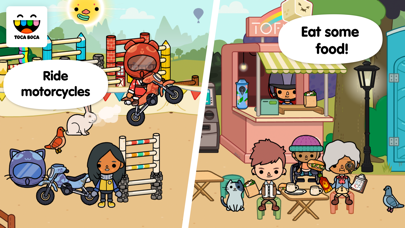 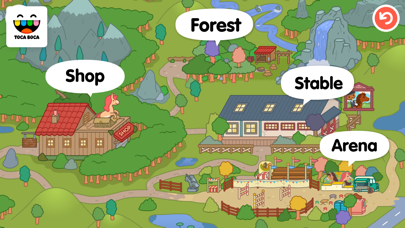 This game gets stuck on load screen, playing the Toca Boca over and over and over. You should update or fix. I have uninstalled and reinstalled. My daughters iPad is a Pro, only a year old and fully updated. Problem is on your end!
By ZuzuAvalon

You have eyes 😏
By sad_af

Hi, Toca Boca developer! I really love this AMAZING game, but there are a few things that you could update/change. Horses & Ponies: It would be SUPER AWESOME if you could add some more horses and ponies! Maybe even some foals! Breeding: If you added foals, it would be really nice if we could breed horses and ponies! And then we could raise the foal/s and maybe there could be a horse auction? Cabin: I would really like it if you added a cabin! It could be big and fancy, or small and simple, whatever design would be great! And maybe some bunk beds? Or just beds in general? The Rumor: So, I know that people have been saying there is a secret world behind the waterfall or a portal you can creat out of the gems, and that would be really snazzy if you added a secret world (if there is not already one)! Some magical horses could live there, like another Pegasus or two and some unicorns? And maybe the Pegasi could fly? Stables/Stalls: I was hoping that there would be more stalls then just three, but there is only three. So, maybe you could add a some more stalls? And maybe another stable? That’s all I can think of, but I really hope you’ll consider these ideas and update Toca Stable soon! Thankyou for this amazing and super fun game, Toca Boca developers!
By #BeautifulBlir

Secrets of the game!!!

I have discovered that if you put the green frog on the green Lillypad and the red Raven on the red Lillypad the yellow squirrel on the yellow lily pad The waterfall opens you tap the gem inside a big flash of light will be in Alcorn two elves and strange creatures will show up the third gem Will be revealed.🌟🌟🌟🌟🌟
By Emmelineg

Great game and I have questions

This game is amazing! All of the Toca Life games have fun adventures and secret places. For this game there is the secret waterfall. When you set the animals on the lily pads the waterfall disappears and there is a giant crystal. When you click the crystal two “elves” appear as well as a unicorn or Pegasus. (Whichever one you would like to call it.)I have a few suggestions that would make the game a little more exciting. First off I kind of wish that you could go into a whole new area once you click the crystal or once everything appears you can click where the elves are and you go to a new area. My second suggestion would be to add a house. The house could have one nice big room and then a smaller room with bunk beds as well as a bathroom and kitchen and anything else you would add. My third suggestion would be to add more stables. I would really love to add more horses into the stables. Since most of the other games have homes it makes it a little easier to play in a way. Thank you for making such wonderful games! If you ever make more of the Toca Life games is there a way you could make more of the games free? If not totally fine. Thank you!
By graciesoccer⚽️⚽️

I love it! But...I wish that they could maybe add some stuff

Ya know that blue manes horse? Well I still can’t find it and I have looked everywhere! But it’s not to bad I can live with it. I thought maybe this game could add breeding cause it would be cool to cross all of the unique horses you have. So I hope someone makes an update about breeding ‘cause think of it! Crossing horses you have then you could have a whole lot of foals!(baby horses) then they could grow up! But it’s just a thought , even though it’s just a small thought I really hope they put breeding in but overall a great and creative game!
By horse_riderXD

Ok hi I love yo games but one problem on the guy on the app with the blonde 👱🏻‍♀️ hair when I put on a swimming suit he has zero 🦵 and it’s just weir because his normal clothes have lodge on them but not when he has a swimming suit so thank u 🙏 if you fix the bug 🐜 but all yo games are amazing 😉!!!!
By Otter the Jester

AWESOME! (But I have some suggestions)

This is my favorite toca boca app! I love everything with the horses and secret sloth, unicorn and other creatures. I have reviewed something else toca boca I can’t remember. I think it was the favorite pack (not that it really matters). I hope you read this cause I have suggestions. I wish there was baby unicorn or a baby sloth. (This only applies to toca boca world) I also wish that you could move the horses to another location like the toca farm. This has nothing to do with this app but please, please, please make a zoo (and please, please, please make it free or $0,99)! Tons of other reviews I read ask to make a zoo as well. If you do make a zoo add penguins, narwhals and unicorns! Thank you Toca Boca for reading, I love your apps!
By averymoody@lsu

I love this game, you can do any thing you want. Like, you can make birthday party’s with all the outfits and every thing! I love horses + animals, and I love to be creative so this game is perfect for me. I can make what ever I want, like I can make a kid have a lesson for the first time or something. Great job on this game! It’s one of my favorites for sure! Keep it up!
By t.jmax