MyFLO is the first-ever period tracker and fertility app that tells you what to do to be symptom-free! Learn why you have symptoms and how to fix your period naturally. Know which foods, exercise, work, social, and love are best at each phase of your cycle. Learn how to ‘read’ your period and know if your hormones are healthy--discover what your period means about your hormonal balance. MyFLO helps: + PCOS + Endometriosis + PMS + PMDD + Fertility + Missing Periods + Fibroids + Mood Swings + Low Sex Drive + Perimenopause + Acne + Bloating + Fatigue MyFLO Features: + One touch fast entry: tap icons that matches your daily symptoms + Smart tracking: enter symptoms for 2 cycles and MyFLO will adjust calendar to match your real cycle + Passcode-enabled: protect your data + privacy + Data backup option + Track 30+ symptoms like cramps, bloating, headache, acne, cravings, mood swings, insomnia, fatigue, menstrual color and heaviness + Learn what symptoms mean in each cycle phase and which foods to eat to resolve them + Tracks symptom frequency and suggests 4-week food based plan to resolve them + In-depth symptom guide: learn why you have different symptoms in all 4 phases + Learn what the color of your period means about your hormonal balance + Be notified when you’re in a new cycle phase so you can plan accordingly + 4 phase overview of your hormonal changes, how long each phase lasts, and what to expect MyFLO also includes: + Food tips: what to eat in all 4 phases to optimize hormones and fix symptoms + Exercise tips: which workout type is best for each cycle phase + Focus tips: choose social + work activities optimized for your weekly brain chemistry + Love tips: the best sex for each cycle phase + Schedule it: add lifestyle tips directly into your calendar + FLO Rx: specific 4-week programs if MyFLO detects recurring symptom patterns + Partner sync: connect your partner to MyFLO via email. The app tells them when you move phases and how to best support you romantically. Use My FLO to: + Know your menstrual cycle (and when the next period is coming) + Increase your chances of pregnancy and improve fertility + Get reminded before your next period, PMS, and fertile window + Learn how your cycle affects your mood + Know the best days to get pregnant + Learn what to eat to reduce period symptoms + Discover your unique brain and body strengths each week of your cycle + Find which types of exercise will support healthy hormones weekly + Get off the Pill What Our Customers Have Said “MyFLO is worlds better! I quit using other apps because they didn't offer much more than complicated graphs.” “MyFLO is such a great resource. Other apps I've tried make it hard to sync your actual cycle with their general cycle.” “MyFLO blows my other tracker out of the water. I love that I can track my symptoms and the app will notice patterns AND give me advice and assistance!!” “My FAVORITE PART is the cycle email tips to my significant other. I LOVE it and my boyfriend LOVES it too. The weekly tips for loving me better make him feel like he can win with me, and that's amazing. I recommend this app for this reason alone.” What Doctors Say “A clear, practical, user-friendly solution to the most pervasive and common gynecological problems women face today.” - Dr. Christiane Northrup “Alisa is a thought leader when it comes to providing women with the healthcare they really need. Her revolutionary approach will transform your body and your life.” - Dr. Frank Lipman “Alisa Vitti teaches you to live in your FLO so you can control your hormones, rather than letting them control you. Take your health into your own hands and relish being a woman instead of cursing your gender.” - Dr. Lissa Rankin 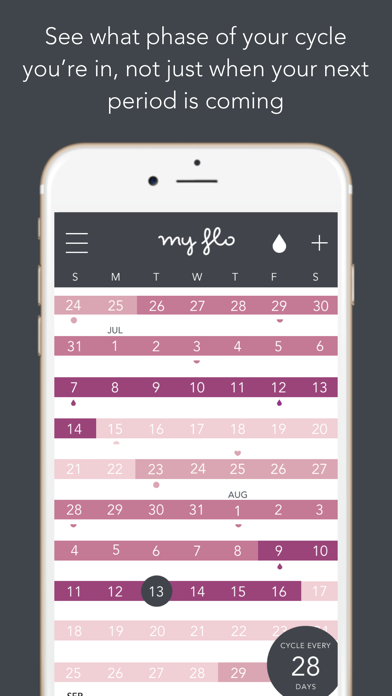 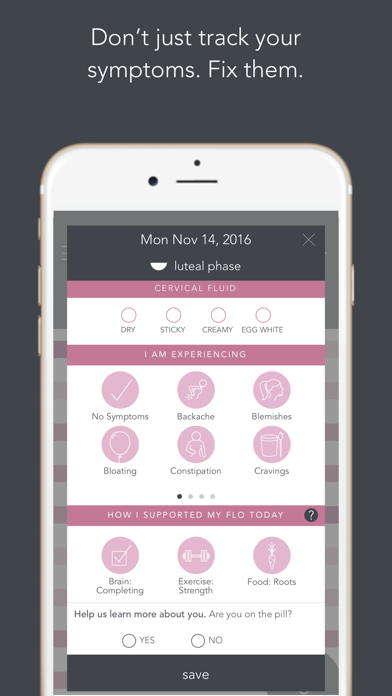 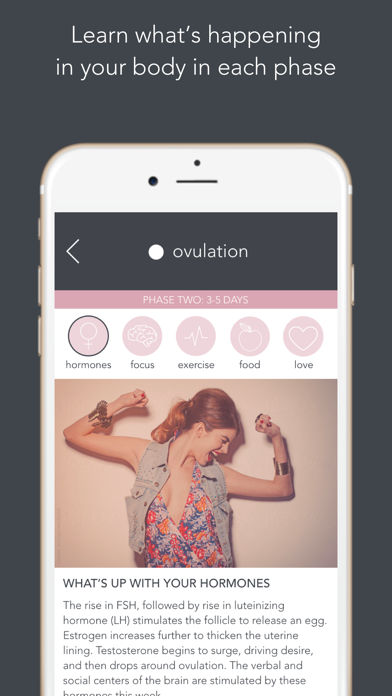 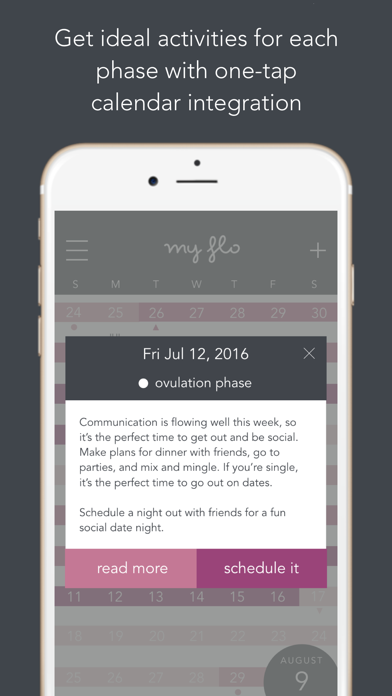 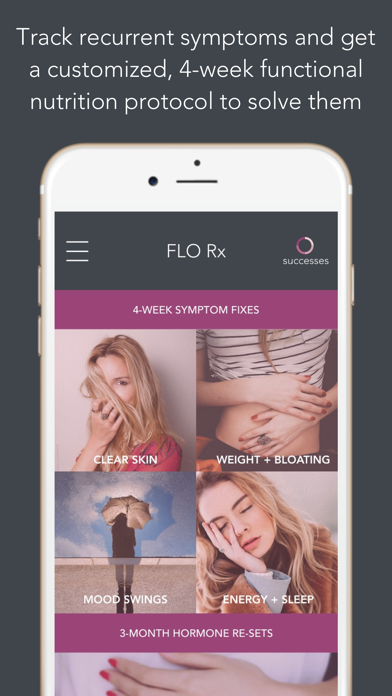 I did not like this, at first it seems much better than other ones I’ve used as far as information and giving tips, etc. However, it is not easy or fun to you and I find it frustrating. You can’t scroll through the calendar effortlessly which is a necessity for me. It’s not easy to “start” and “stop” your period if it doesn’t align with the apps predictions. I don’t know maybe it’s just me but I deleted it and will stick with the other one I was using, much more simple and efficient. I think this one is overkill and not user friendly. Bummer. I recommend period tracker lite
By 081746629@

Love the content of this app, really great. It does get glitchy sometimes and won’t allow me to add daily symptoms via the + button upper right. I have to delete and reinstall to get working again which is a little annoying. Hopefully this will get fixed soon.
By EmmyWaltzers

App wont open. Keeps saying checking for updates. Meanwhile no update is available on the app store. Very frustrating. Cant find any resources to help me
By larry king david

I was excited about this app, but it is really lacking in ease of use and customization. I forgot to log my last period on the day it started, so I went back to choose my start date later. It was difficult to do, and now it tells me I only have 6 days between cycles. For example, my last cycle finished the 19th, and now it says I’m late for the next cycle. Hopefully it gets back on track once my next cycle actually starts...but it’s annoying that I can’t input the number of days between.
By erichus

It no longer lets me log my symptoms anymore.. loved the app till it just stopped What’s the point of paying for this app if it’s gonna stop letting you log
By MaryPandaAri

The app doesn’t properly or accurately track my cycle. For example , I’ll input when I started my period and then it will tell me that my period is due in 5 days. Or when I’m ovulating it tells me that my period is late. It also says that my cycle is only 13 days and the kicker is that when I report that I’m having no symptoms, or tells me what the root cause of that is as though I’m SUPPOSED to have symptoms. A giant waste of money. I do not recommend. There are way better and more accurate cycle apps out there and also the cool gives false and contradicting advise. Buyer beware
By Shoegirlnyc

I actually like this app a lot but over the past week I cannot open it. I saw my phone needed an upgrade so I did that today- nothing. Other reviewers seem to be having issues too so I don’t think it’s just me. It still sends me notifications though, weird. I guess I can delete it and redos load it or get another tracker app but I hate to lose my data from over the years.
By secatmay

The idea of the app is great, but after a few weeks it stopped letting me input my symptoms; the + button stopped working. The UI is also not intuitive- information is pretty buried. But with some bug fixes and easy redesign, it would be great!
By J C Weaver

I’d been using it more consistently these past 3-4 weeks. Unfortunately, it stopped working. I couldn’t submit my symptoms. I then ended up restarting the app but lost my data. I saw another review addressed this same issue so I’m not the only one. I sent a inquiry through the help option but haven’t heard anything and it seems like I won’t. Appears this app has no support so it’s pretty useless as it currently stands. It’s a bummer because I was getting into the habit of tracking and using daily.
By nfernandez48