Join Snoopy, Charlie Brown and the rest of your favorite Peanuts characters in Snoopy Pop - a delightful new bubble shooter with exciting game modes! Pop bubbles and explore all the fun the Peanuts Gang has in store for you! Good Grief! Woodstock and the rest of his flock of birds are trapped in bubbles! Help Snoopy strategically burst bubbles to save his best friend! He’ll need the skills and talents of each of his famous personas to save them! Employ the help of Charlie Brown’s yellow kite and Linus’ blanket to overcome obstacles and return the birds safely to land. Prepare your doghouse and stock up on bubbles as you take on the infamous Red Baron to save your fledgling friends! Features: - Over 800 fun-filled levels with more to come! - Exciting neighborhoods to explore! - Featuring original music from the Peanuts series! - All new game modes starring all of your favorite Snoopy personas! - Collect Peanuts characters, game pieces, boosters, and more! - Defeat the Red Baron and become a world-famous “Flying Ace”! - Use the Beach Ball Burst to make quick work of any bubble challenges! - In-game events themed around classic Peanuts storylines and holiday specials you’ve grown up with! - Check back often for fresh new characters and puzzles... added weekly! Don’t be a blockhead! Play Snoopy Pop today! DEVELOPER INFO: Jam City is the leading developer in truly cross-platform social gaming! Check out our other free match 3 puzzle games! You'll love to swap, match, and crunch through ever expanding levels and events. Check back often to see all the new games that we've added! Jam through each new puzzle adventure. 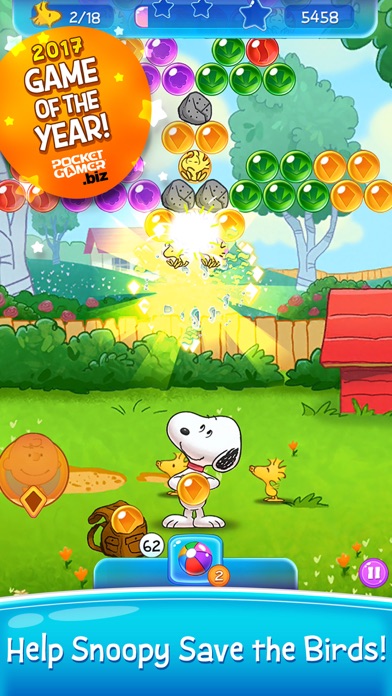 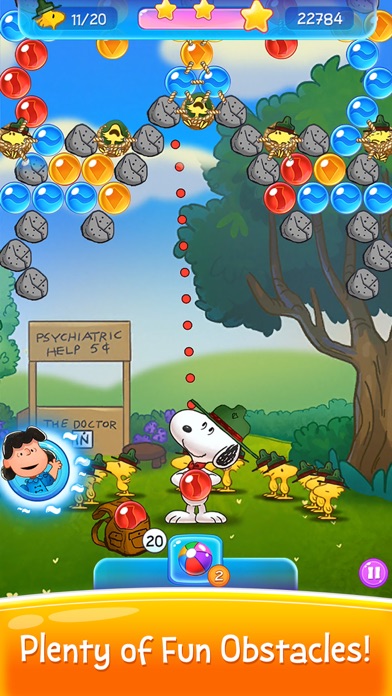 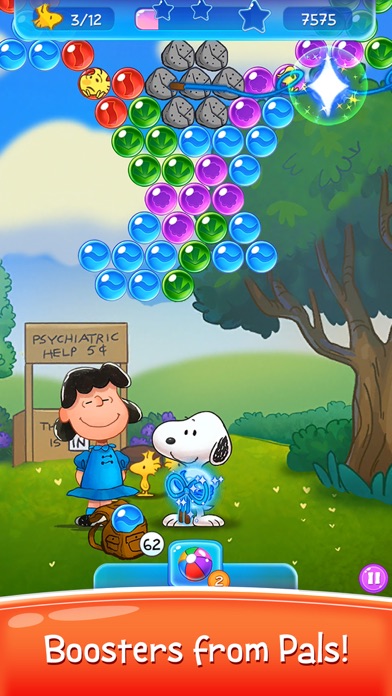 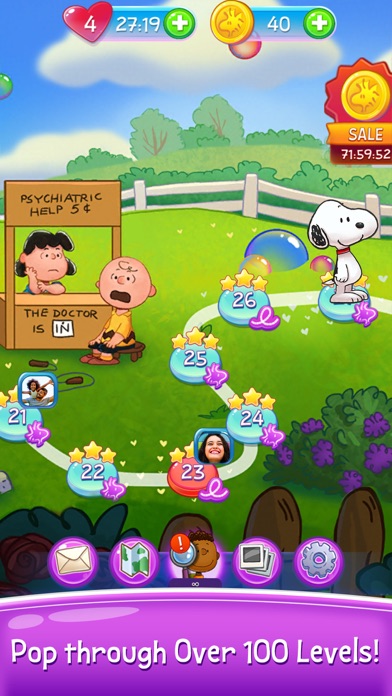 Took my coins but did not give me extra balls

Tried to continue a level for 40 coins. Took the coins but did not continue the level. Also have had balls “hang” in the middle of the screen after shooting them.
By #mel-2

Freezes and steals your money

It starts out as a fun game, then as it gets more difficult it costs money for coins. Today it froze after I paid for my extra coins, wouldn’t unfreeze and then just took my money with no coins. Rip off!
By AngrySnoopyFan!

There are too many hard levels......some people play games fir fun and to keep their brains strong.....a game shouldn’t be stressful....also, you should be able to bank your unused bubbles....not that this review means anything, I filled out so many of these on several apps and nothing changes....why waste my time....
By Nurse non

I ALMOST LOVE IT

This game has a few problems but if they were fixed I would really love it. Some message windows flash on the screw for literally 1 second so I can’t read it. There’s one that says something about umbrellas and another about flowers. There’s no way to freeze it or catch them. Another is everything is WAY too expensive. Stop being greedy tightwads! Other games give out free boosters , you never do unless I watch a commercial. Even if I wanted to spend money I don’t because of the ridiculous prices. You are selling fake virtual items that cost you guys NOTHING. I was going to buy stuff until I saw the price. Most people are not rich. And there’s no way to win unless you use boosters so I just end up logging off.
By FreddieRey

Love the game, too many adds

Love the game but having an add for that stupid puzzle game where you pull the spikes out to save people or sheep, or fish is too often!
By Mmmneemee

I bought the ad free version and the it gave me a error message. So I deleted it and reinstalled and surprise now has ads. $9.99 for one day use because I don’t have Facebook, great. Don’t waste your time or money on this.
By dunhndyneyn

See title. Almost spend more time watching commercials than playing the game. There are many other bubble pop games that don’t have the commercials after every level. It’s not bad side from that.
By appleadaykeepsthewindozeaway

It’s a great game to play but for the last few days it had been glitching mid game. I’ll get close to the end of a round and it’ll freeze. The game would still be in motion but for some reason the bubbles/balls wouldn’t show up. Before it would just completely shut off when I would get on the app and now it just freezes mid game.
By LivyQueen

Very fun game... Especially if you like the Peanuts Gang...
By Me Me 57

Please get snoopy sugar drop remix game back
By sweey6969