Drive through Gettysburg and into history with Gettysburg Tours. Watch live action battle scenes that help you imagine real events on Gettysburg’s open fields. The Gettysburg Driving Tour App isn’t just a static map and pictures; it’s a fully immersive and interactive experience. You MUST allow the app to track your location for the GPS triggers to work properly. Press "Allow" when prompted after downloading the app. Your iPad or tablet must be cell data capable Or it must be a smart phone. WiFi only iPads will not work for the on-site gps tour. At each of the National Park Service’s 16 Auto Tour Stops you can: -Experience GPS triggered audio that plays automatically as you drive -Watch battle videos specific to your location -View custom maps -See historically accurate and realistic paintings -Get directions to the next stop You can zip through the park quickly by pausing at a limited number of key stops, or spend more time and experience all 16. It’s fun, flexible, and easy to use. The audio in the app will trigger and play as you drive by historic battle fields. Please note: Continued use of GPS running in the background can dramatically decrease battery life. 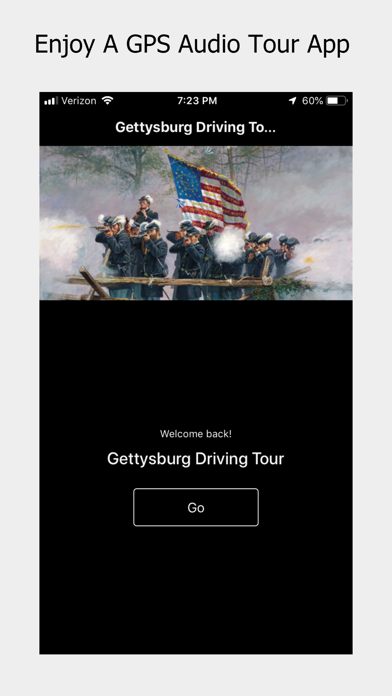 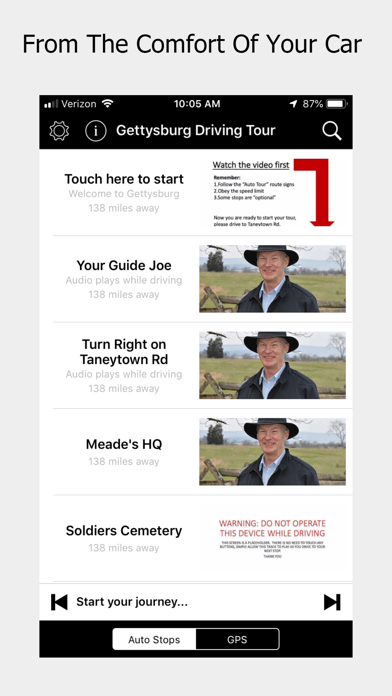 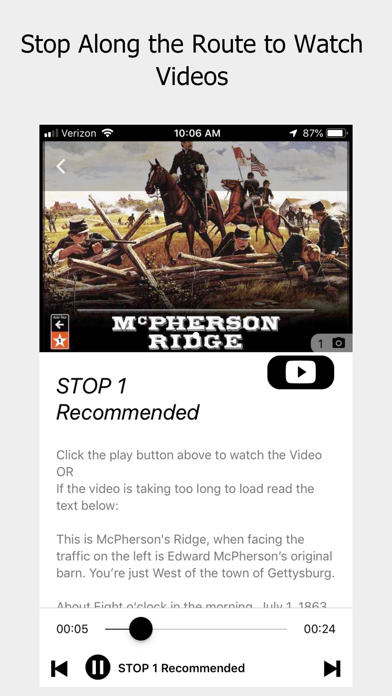 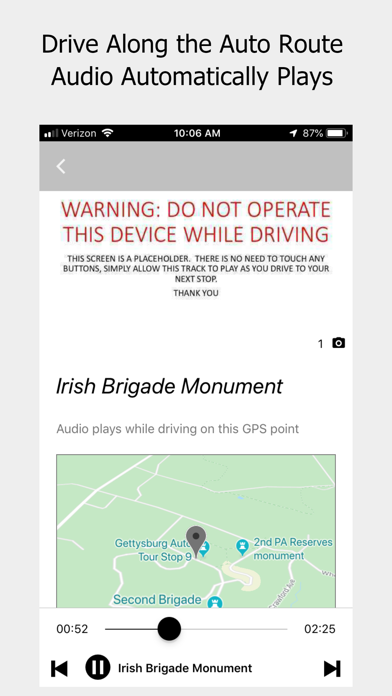 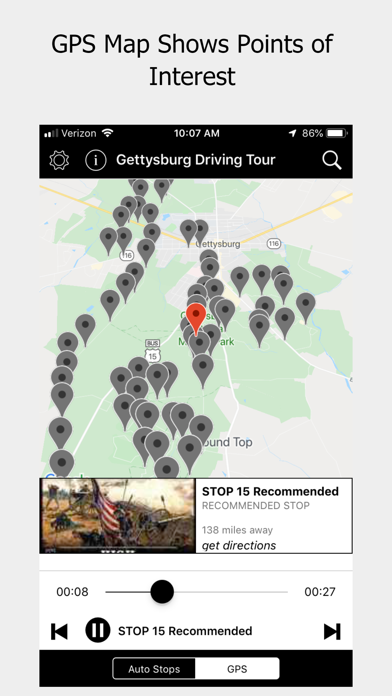 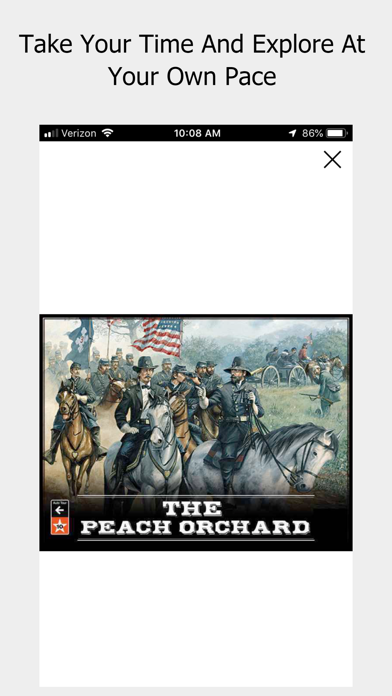 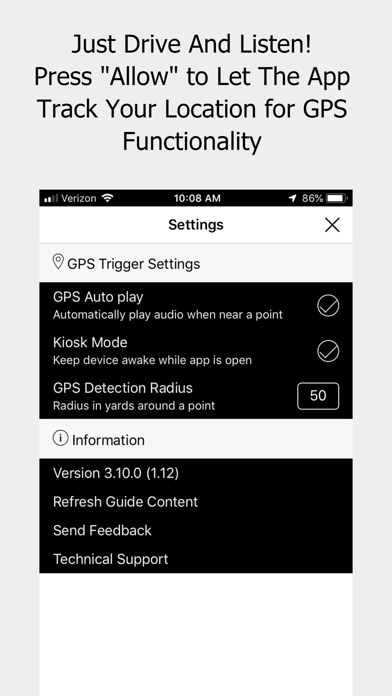 I’m asking for my money back

I’m asking for my money back on this app. The premise is good, but they are are effectively no instructions on how to use it and I found myself going around in circles because on many intersections there were no instructions given as to which direction to take. It’s unfortunate, because frankly for maybe 10 or 15 hours of additional work this application would work very well and be easy to use, but I wasted at least two hours in backtracking because of the poor directions.
By u99u9h4oiou

Bluetooth does not work

App will not play on our car. Would like a refund as we were not able to use it all.
By Skatchel

We used this on a day when the visitor’s center was closed due to the Coronavirus (Tues & Weds). It worked well for the most part. It narrated based on our GPS and we used it via Bluetooth so everyone could hear. The only part that was very confusing was when heading towards stops 13 & 14, as you go through the visitors center parking area, it repeats the beginning narration. That made us think we made a wrong turn but eventually we saw on the app that was to be ignored. We didn’t figure where to go after those stops but it was late in the day and it was our fault I’m sure. I used this in an iPhone 11 so the X to close the videos was cut off at the top but if you know it’s there on the top right you could find it. Was worth the money and was informative. I’ll go back again some day & use it again and hopefully reach the end of the tour.
By LL&RL

This was a really great way to experience the route! The app automatically played at each stop making it super easy to use. It also gave you re-enactment videos at each stop on the route which got you into the experience. Highly recommend this!
By CurlyDancegirl

We chose this app because of the good reviews. Unfortunately it quit working half way through and just wouldn’t play any of the recordings anymore. This happened several times and I finally gave up. We only got half way through the tour. I wish we had signed up for a guided tour. We would have learned soooo much more than the small amount of info provided by the first half of this tour.
By disapointed tourists

So Great (but out of date)

This App is an amazing guide for touring Gettysburg! The content, audio narration and videos are superb! My main gripe is it’s not designed for the full iPhone range. If you’ve got an iPhone with a notch at the top, you know the pain of an app that isn’t designed to adapt to the screen. The “close” x for videos is cut off at the top of the screen making it hard to close the videos. The UI over all is poor, with bits of the content not moving when scrolling through the text on screen. Come on folks, make this app worthy of the content you’re putting out!
By Heimkev

My family used the app for a tour this past weekend while many aspects of the park are still closed from COVID, and we were so pleased with the amount of information and the length of the tour. We did all the stops, both recommended and optional, getting out to read signs and walk through everything, and it took us over four hours. It felt so thorough and worked perfectly, playing everything automatically based on the GPS tracking. We are so grateful this app was able to give us a top notch Gettysburg experience, even while many things were closed.
By Merlinthegirlin

The future of history tours

This was so cool! I appreciated that the app followed our location and we didn’t really have to touch anything! I really recommend.
By Lennturnt

This was the most frustrating app I have ever used! The interaction with the GPS was terrible! Rarely auto played any of the segments. The only time we really knew that we had to manually play the segments was when we were at suggested stops. IMHO it was a waste of $10! Don’t do it!!!
By TammyD328

Paid for app but never got to use. Didn’t get any sound from videos. Removed app from phone and redownloaded three times with the same problem. Phone was properly synced. We ended up finding YouTube videos for each stop site. Waste of money.
By gyhbvgyn