Wondering what to wear today or need a bit of outfit inspiration? Let Cladwell personally style you every day using the clothes already in your closet. You can also follow your friends' closets and explore what others are wearing every day from around the world. •••• • Simply Tap Items To Add Your Closet Browse over 16,000 women's & men's articles of clothing that are similar to what you already own and add them to your digital closet within the app. Can't find a specific item? Quickly snap a photo of your clothes and upload. • See Daily Outfit Ideas, Stylist Approved Receive daily outfit inspiration based on what's in your closet, the weather forecast, and how often you wear an item. Swipe through the outfit ideas, and log it for the day. Need a little more inspiration? Browse your virtual closet to see outfits by specific articles of clothing. • Follow Friends' Closets & Explore Outfits Get inspired by your friends. Look into each others' closets. And discover new closets and outfits from around the world. • Organize Your Closet or Capsule Have specific clothes for work or a particular season? Are you packing for a trip? Organize your closet with Cladwell's Capsule Wardrobe Manager. See the most relevant outfit ideas, specific to the clothes in a selected capsule wardrobe. • Discover Your Personal Style Cladwell allows you to track what you wear each day, so you learn about your personal style. Discover which clothing you love and wear most often, and which you don’t. Feel great about cutting the closet clutter while looking great. • Shop Smarter Discover what types of clothing to add that best match what you already own in your closet or capsule wardrobe. Discover your style and unlock endless outfit possibilities with Cladwell. •••• Curious how thousands of current subscribers have already made Cladwell a part of their daily routine? Here are just a few of our most recent customer reviews: “It’s been very helpful in giving me ideas to expand how I use my wardrobe!” - Amelia “This app saves me money in the long run and helps me rediscover both my style and the bottom of my closet.” - Claudia “it has saved me lots of time and, more importantly, saved me lots of decision-making. I have a stressful job and one less thing to think about means A LOT.” - Megan “I have already recommended it to family and friends. It has helped to de-clutter my life and makes getting ready for work so easy!” - Andrea “It’s a great way to figure out what to wear and use the clothes you already own.” - Brian •••• Subscription Terms: After 7 day frees users will lose access. A user will not be charged until they select a $9.99 monthly, $14.99 quarterly, or $49.99 annually plan. Cladwell subscriptions automatically renew unless turned off in Account Settings at least 24 hours before the current period ends. Payment is charged to your iTunes account. The unused portion of the free trial is forfeited after purchase. You can cancel or change your subscription settings via the Account Settings on the device or in the app. •••• Privacy Policy: cladwell.com/privacy-policy Terms of Service: cladwell.com/terms-of-service SUPPORT For support, please visit cladwell.com/hello - We are always here & want to help. FEEDBACK We value our subscribers and their feedback! To help us improve Cladwell, please send us a note at cladwell.com/feedback 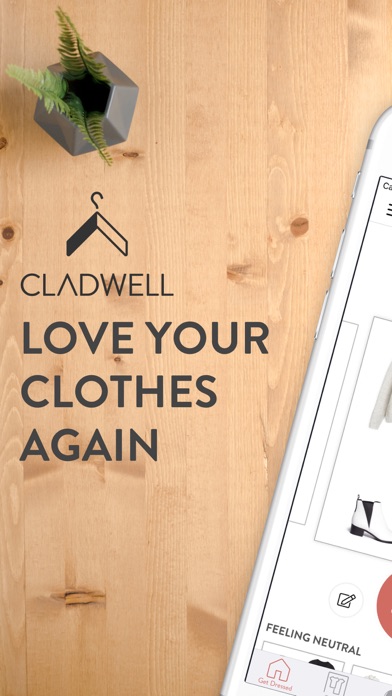 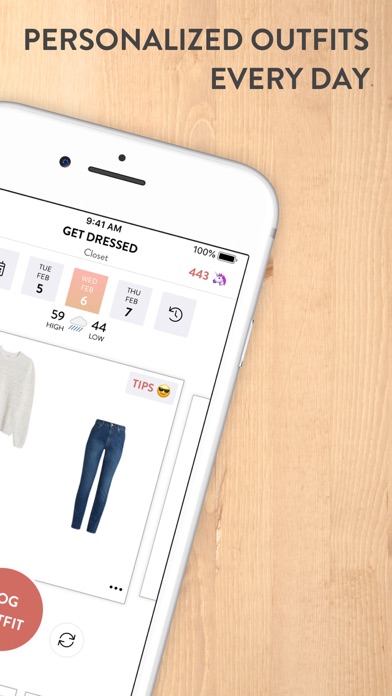 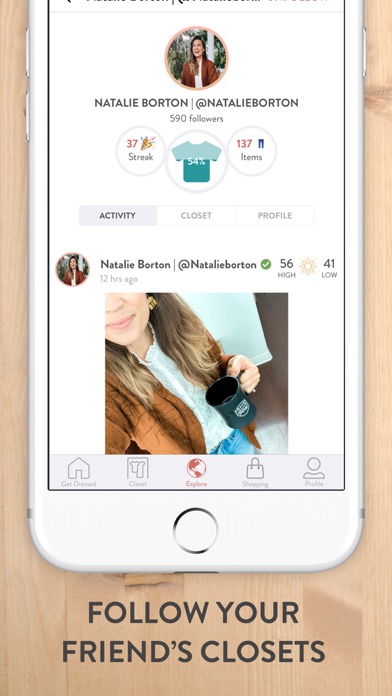 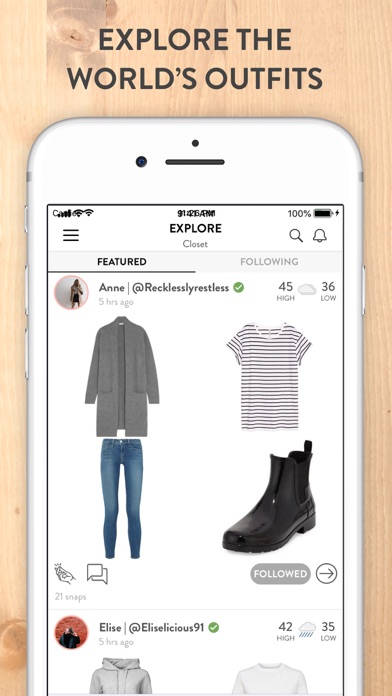 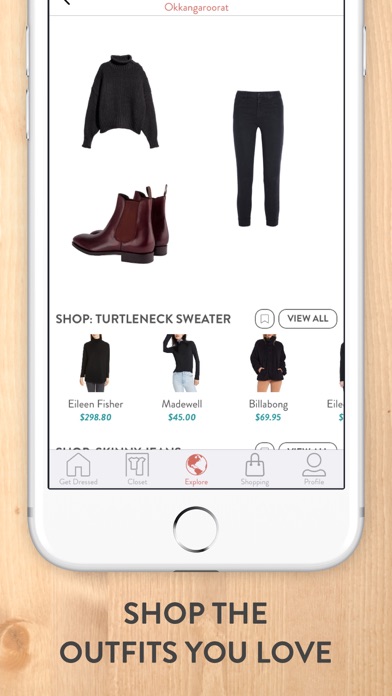 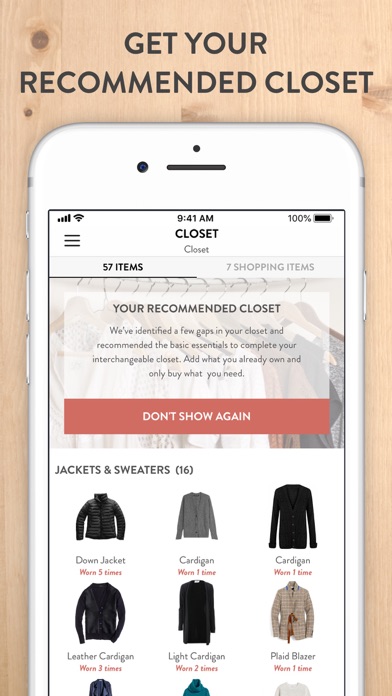 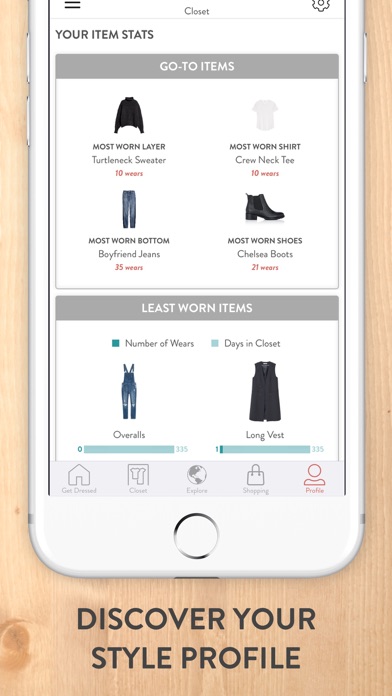 Amazing concept and interface. Groundbreaking, really. The tech team needs to work on the app though - it is buggy and crashes constantly.
By mwatts230

Exactly What I Needed!

I am loving this app! It takes the guesswork out of what to wear and reminds me what is in my closet that I haven’t worn in awhile. It’s like the old Polyvore/Pinterest pics but with the clothes you already own. It’s easy to use and I think will help keep me from shopping so much!
By KLaw27

Don't buy the subscription. For the price of this AUTOMATIC MONTHLY FEE you could buy the full version the other closet app in the Apple Store. Again that is a one time payment, and even that is still less than one month of this garbage app. Anyone you see with this app is paid to advertise it, don't fall for the subscription apps
By Skdmrnend

I have been using the app on and off for several years now and can confirm that the app does frequently crash. This has not changed over the years. As one of the first users they have granted me a lifetime access to the app, which they have recently revoked. Safe to say I won’t be paying $50/year for this app as it simply isn’t worth it. Advice to management - invest in the app before you charge your customers and keep on your promises!
By Kina6739473

Super upset that the app comes across as a free app, give a 7 day free trial and then does not allow you back into the app without payment.
By CourtneyDrew1108

Such a waste of time and money

I first started using this app several years ago. I spent a lot of time taking pictures of my clothes and finding images of my shoes online. I uploaded them all to the app and added details the best I could and as accurately as I could so the app could generate legitimate outfit possibilities. 1. The app continuously crashed. No matter how many updates there was. Which meant if it crashed while you were uploading and editing items... you had to start all over every time it crashed. So frustrating. It froze and took time to load also. 2. The item stats available in the app that you select to describe each item could’ve used a lot of improvements. There weren’t enough fabric choices or outfit description choices to accurately describe pieces. That meant when the app generated outfits, 95% of them were hideous and did not go together at all. I found myself dismissing almost every outfit generated. After uploading literally my whole closet (only pieces I’d actually wear) I felt it wasn’t performing well for me at all. I decided to write an email to the developer telling them the issues I personally had while using it. Like there not being enough item stats to choose.. for example I told them there was no option for a crop top. It’s 2021.. crop tops are EVERYWHERE and this app doesn’t even give you the option to add a crop top to your wardrobe. I spent more time fiddling with the app and dismissing outfits until I found one that was a legitimate matching outfit, than the time I would’ve spent standing in my closet and staring at my clothes trying to figure out what to wear WITHOUT help from this app. The developers emailed me back basically acting like I was an idiot for giving suggestions and sharing the difficulties I had while adding pieces. To be clear, I wasn’t rude in my email at all. These people literally said, “Wow that is a thorough suggestion.” They never added any of the things I emailed them about. No crop top option, no additional color options.. all things necessary to get legitimate matching outfits. Then in May 2020 I received an email from the developers stating they were now charging for use of the app. Joke. I deleted it. The app was terrible and then they wanted to charge for it??? Now it’s February 2021 and I downloaded the app again, in hopes there were improvements. I downloaded the app again rather than trying another wardrobe app simply bc I spent a lot of time inputting my entire wardrobe into this app. To even get into my account I had to pay the monthly subscription of $9.99. I took the plunge and did it.. HUGE WASTE OF FREAKING MONEY. The app has not improved in the slightest bit. It still has the same issues of freezing and crashing constantly and not having enough stat options for adding your wardrobe. What a joke.
By Slang19

Has potential but doesn’t quite work

The app has a ton of potential but the matching “rules” don’t make much sense. It would be much better if you could see exactly what was powering the recommendations. For example, it seems that the backend dictates black and navy can’t be worn together. That’s archaic. I’m also forced to mis-categorize things on purpose in order for them to appear in suggestions. For example, chinos seem to always take precedent over jeans. Or, I have to categorize light jackets as blazers, otherwise they’re never shown if the temperature is above a certain threshold. One more example: my closet is full of navy tops and I just added orange chinos. Clearly the system really likes complementary color schemes because now every single outfit suggestion includes the orange chinos. I’d really like to be able to customize some of the high level color and item type rules to fit my lifestyle better.
By isaacjohn48

The app's functionality is very basic. The ability to contact a personal stylist is great, but works only if you plan outfits in advance. The weather doesn't seem to affect the automatic outfit selection. There doesn't seem to be any active development of the app which considering that it's a subscription service is very disappointing.
By Martinassffhj

Full of bugs and crashes constantly

Overall, I really wanted to love this app. I Iike the concept and I think it would be extremely useful...IF IT WORKED. Instead it crashes every 10 minutes and refuses to save manual updates to items (like the name, fit, color etc). I can’t fathom spending $50 a year on an app the developers can’t be bothered to push regular and BASIC updates to. Also the lack of accessories and jewelry is such a sad oversight. Accessories make an outfit! Any person with half an interest in fashion and style would understand and prioritize that as a feature. Whoever is steering this ship has completely missed the mark. If they fixed these items, I could be enticed to return. If the app worked flawlessly, I wouldn’t even mind spending the exorbitant $50 annual fee. Sad to say it’s a no from me.
By azyt19

No respect for OG loyal customers.

I used this app daily for over a year and was a paid member. I invested an almost embarrassing amount of time uploading and documenting every last detail of my wardrobe. I stopped using it during Covid - because, errrm- myself and the rest of the world wasn’t leaving the house. I just opened it up to make a vacation capsule and am 100% locked out unless I fork over the now ridiculous $50/year. All of my time and energy invested in making this app useful down the drain.
By Sfoisy