Nomorobo blocks annoying robocalls, telemarketers, spam texts, and phone scammers from calling your phone. Bring peace and quiet back to your life. Try it free for 14 days - only $1.99/month after. ## 3x App Store "App of the Day" ## Featured by Apple as "New Apps We Love" ## Winner of the FTC Robocall Challenge ## PC Magazine Editor's Choice FEATURES - Real-time protection from over 3,200,000 annoying robocallers, telemarketers, and phone scammers - Over 1,500+ new robocallers identified every day - Important robocalls, like school closings and weather alerts, are able to get through - Privacy friendly - Never accesses your call logs - Block or identify robocalls (your choice) - Protection from text spam and phishing attempts - Listen to thousands of robocall messages in our database - Block "neighbor spoofed" calls. These are numbers that are very similar to yours. - Block invasive trackers and annoying web ads. ## Over 1.5 BILLION robocalls stopped since 2013 ## Trusted by over 2,500,000 people every day AS SEEN IN - The New York Times - The Wall Street Journal - CBS News - NBC Nightly News - Wired - eWeek SUBSCRIPTION INFORMATION - All plans come with a 14 day free trial and cost $1.99/month or $19.99/year after that. - Payment will be charged to your iTunes Account at confirmation of purchase. - You can cancel your subscription here: https://support.apple.com/en-us/HT202039 - Your subscription automatically renews unless auto-renew is turned off at least 24-hours before the end of the current period. - The account will be charged for renewal within 24-hours prior to the end of the current period. - When purchasing a subscription, any unused portion of a free trial period will be forfeited. - Privacy policy & terms of use are here: https://www.nomorobo.com/pages/privacy TROUBLESHOOTING - Please don't swipe-up (aka quit) Nomorobo since it prevents us from refreshing in the background. - If you suddenly can't enable Nomorobo in Settings (it won't stay on), please delete the app, reboot your phone, and reinstall. This clears out an iOS caching issue and will get you back up and running. - Have other questions? Look here: http://support.nomorobo.com 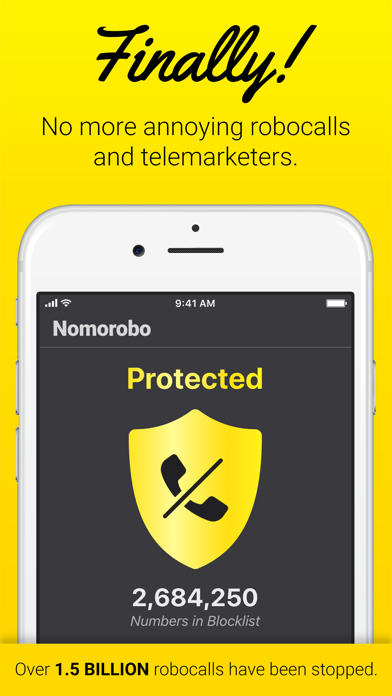 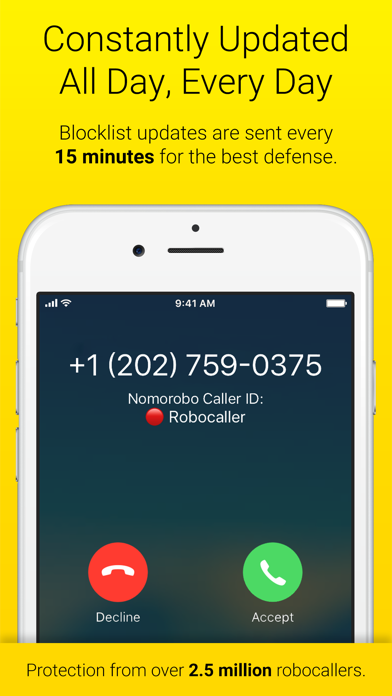 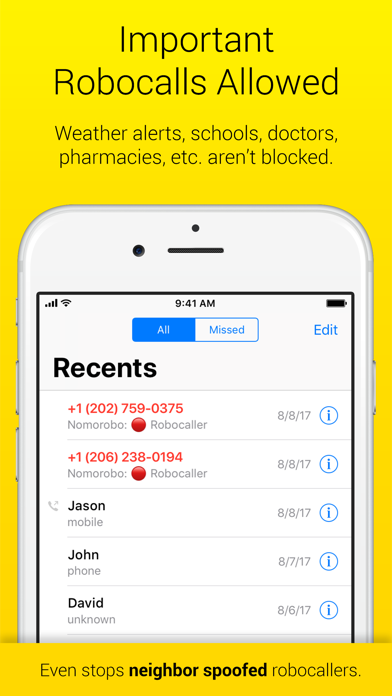 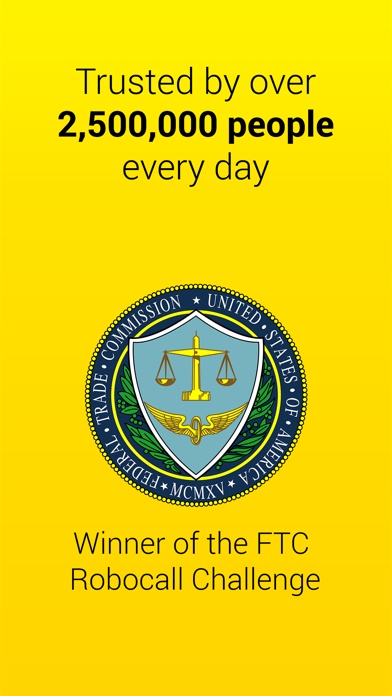 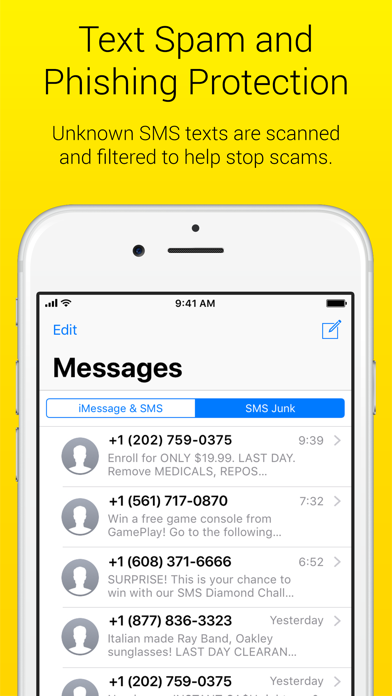 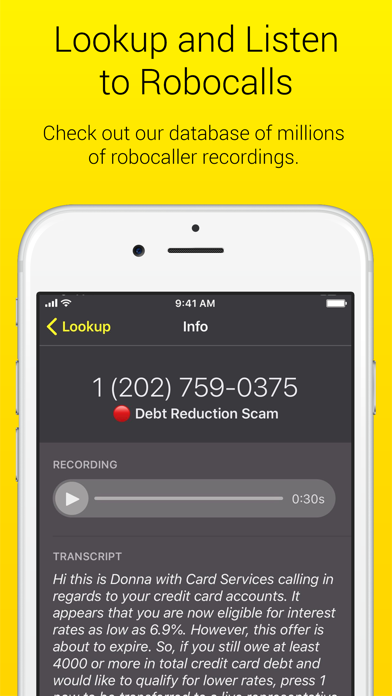 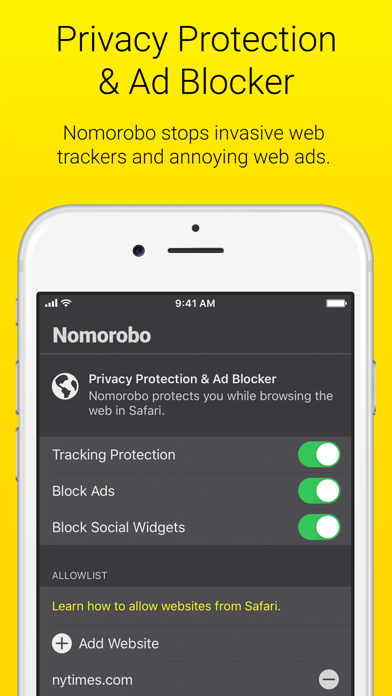 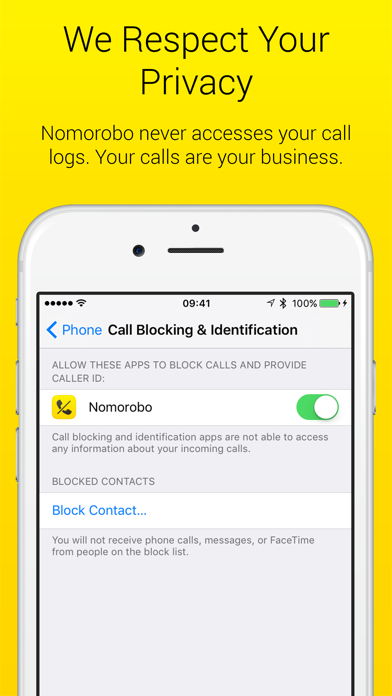 Has completely stopped working on iOS 16.2.1. I have received 4 robocalls today, despite all of them already being listed as Robocallers by the app. Nomorobo is enabled in settings, and set to Block(send to VM) robocallers. I have deleted and reinstalled the app. Strangely, the “Test Robocall” IS properly blocked. FIX THIS!!!
By andrewandadairwood

Not sure how long I’ve been using NOMOROBO but the amount of numbers blocked was less than 400,000. It worked well then and even better now with over 3,500,00 blocked numbers. My wife uses it on her phone, too.
By Ken Dahl

I still keep getting spam calls.
By LAKERS_NEVERDIE

Doesn’t seem to do anything

I get a ton of scam calls every day and I’m just sick of it. Even when though don’t answer them, they’re a major disruption and source of annoyance. I downloaded Nomorobo and made sure it was turned on in my settings, but it doesn’t seem to be doing anything. In my call history, one or two calls are marked as “neighborhood spoofs.” But I still received 20 scam calls today. TWENTY! I can’t see any call logs in the app itself, so I don’t know if there were more scam calls on top of that which did get blocked. But even if the app did manage to block some, they still let TWENTY through! Unless the app suddenly starts doing what it’s supposed to in the next day or two, I’ll definitely be deleting it before I have to start paying a monthly subscription. Even 2 bucks is too much to pay for a product that’s useless.
By JFBB42

Did not stop the Robot calls

The App was easy to install and start using but it simply did not do what I was hoping for, that is to prevent the incessant and non-stop ROBO calls! I’m not a technical user and maybe it simply can not be done? I could not even tell that it slowed them down? Maybe instead of 15 calls a day, I only got 12 calls. I have a few local calls that are important to me that I did not know the contact in advance, that I missed, because I quit answering my phone. And all though I hope the business/individual would leave a voice mail, often they won’t. I know, I’m preaching to the choir. Bottom line, I’m not going to pay for a subscription to maintain an App that did not solve my problem.
By knierimsj

Constantly needs to be reinstalled

Constantly reports that it can’t refresh. Only solution is to remove reboot and reinstall. I have to do it 1-2 times a week. I’m canceling
By --Ben--09123)(

Does not mark/block any robo calls iPhone 13+

This has yet to flag or block ANY robocalls. I have deleted and reinstalled. I have ensured it wasn’t closed (swipe up) and still absolutely nothing. Do not waste your money.
By rfm2022