Zwift blends the fun of video games with the intensity of serious training, helping you achieve every one of your fitness goals. Pair a Zwift-supported device to our app, and get started today. Train. Race. Make new friends and find new competitors, all from the comfort of your home. Daily runs and rides rise to the next level thanks to Zwift. Dive into a collection of immersive worlds using a treadmill and footpod to run , or bike trainer to ride. Follow training plans designed by world-class coaches, create your own, or just go for a casual ride or run with a global community as dedicated as you are. Your training levels up with this any-weather, at-home game that helps you smash your goals! Spin your way through central London. Stride through a futuristic New York City. Transform your living room into a training playground where you can tear through the desert, across Mayan Ruins, beneath an underwater tunnel, and beyond. Training is now better at home: trust your bike trainer or treadmill and footpod to track your results and give you all the data you need. Analyze your workouts. Take your performance to the next level. Trust Zwift to turn every ride and run into a game. Because fun is fast. 5 REASONS TO WORK OUT WITH ZWIFT: • Over 1,000 structured workouts and training plans. Pick whatever you need to help reach your goals. • Take part in group rides, runs, workouts, or races. We offer over 200 live events a day. • Immersive experiences. Get cycling in the Alps or run in the English countryside! • Drive your performance with data. Monitor your progress and analyze your performance. • Widely supported technology. Our app works with dozens of trainers and devices (smart trainer, classic trainer, footpod, etc.). Download Zwift and experience the freedom to train, ride, or run any time. Your time, your pace, your place. GO UNLIMITED Run for free, or ride as much as you want with Zwift’s monthly subscription of $14.99. Prices may vary from country to country. Your subscription will automatically renew unless cancelled at least 24 hours before the end of the current period. Auto-renew may be turned off by going to your Account Settings after purchase. WIDE SELECTION OF SUPPORTED DEVICES For an exhaustive list of supported treadmills and footpods, please visit support.zwift.com. APPLE HEALTH With access to Apple Health, save your activity data from rides or runs and let your Apple Watch provide you with real-time heart rate data. Please see Terms of Use at http://zwift.com/terms/ 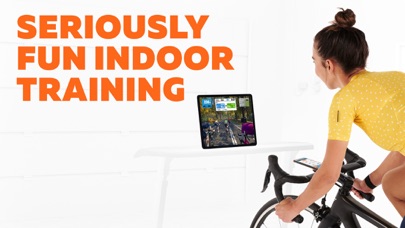 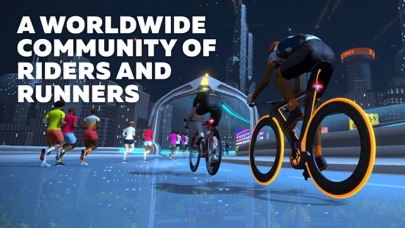 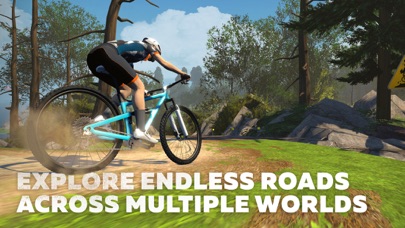 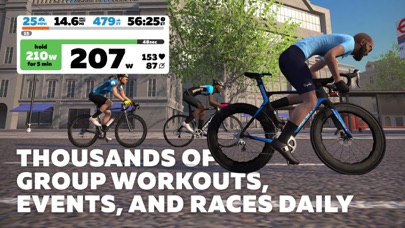 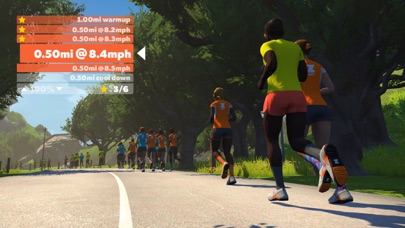 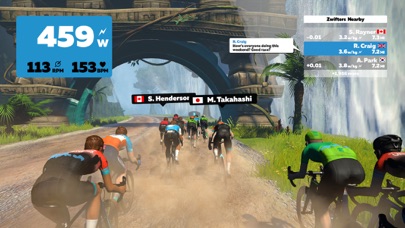 This is the best cycling app out there, but its inability to reliably sync with my Apple Watch is very frustrating. I’d expect better for $15/month.
By nicobrooklyn

So this is the best virtual cycling experience?

As a concept Zwift has a lot going for it, but I find the actual experience incredibly lacking. The Interface is just plain horrible. I do not understand how something this bad makes it to market. Yes, it’s usable, but it has a steep learning curve and lots of quirks. It should be simpler to use and work better. The menu designs and navigation are a nightmare and pairing my Apple Watch and my wahoo trainer at the same time requires me to enter and exit various screens. Not intuitive at all. The graphics are PS2 quality at best and artless in every way. They are flat and joyless and don’t really add anything to the “game play”. It would be great if the graphic would interact with cyclists or had fun animations but instead it’s a dead world filled with NPCs who just look at there phones. Boring. Not really game, more of a backdrop. The biking experience itself is okay. The social aspect is interesting. I suspect that is why this app has been so successful despite its obvious short comings. Honestly it’s just a matter of time before a company the understand basic UI and UE (and maybe some concept of how gaming effects the reward centers of the human brain) comes along and puts out a better product. It wouldn’t be that hard.
By phantom_eye

Seems simple to everyone else

1. Using the Apple TV remote to navigate the app is torture, so imprecise 2. Why the heck do you need to start a ride to then back out to access garage and app settings…so incredibly silly 3. Allow users to ‘pause’ their spot on a map so they can return at another time 4. Allow users to free ride maps not having to start a pre-determines route 5. Cannot seem to calibrate trainer while connected to companion app 6. Build in garage and app settings into companion app
By Mattywalnuts

Wish I could meet these engineers

Your software is awful. Spend more time and money on your UI instead of new maps.
By coopharris

The zwift community is pretty big and often vocal about some issues with the game. Zwift tends to ignore these requests and opts for adding more features that attract new users... Very disappointing, especially for the price of a subscription. A company that is definitely taking advantage of a market full of lagging competitors. Update 11/09/2021 It is absolutely amazing how much money Zwift receives as a company and HOW TERRIBLE THEIR UPDATES ARE. Pack dynamics 3.0 is absolute trash, it ruined the racing
By RickGrrr

The warm up and cool down seems to stay really hard and not follow what the power is supposed to be at. Even when trying to turn off erg it stays locked 11/9/21. This wasn’t a problem yesterday.
By Gsantollo

1) The apple remote does not work with the zwift UI for several elements 2) workouts are only unlocked on Mondays which is an overly complicated feature in conflict with my ability to workout 3) too many avatars everywhere gets old real quick and being forced to look at a screen is poor design. Try adding audio countdowns so I don’t have to look up/bad ergonomics and an not aero position.
By Nicehickey

As much as I’d like to leave 5 star review, Apple Watch support is lacking. Developer support is weak and I’ve been added to a bug list since early this year. Would love to rate the app higher, but with lack of support of such a large eco-system.
By m@nef@c3s

Works OK but with some quirks.

I used Zwift last winter with a runpod and Apple Watch and that worked OK. Sometimes, the run pod would lose its Bluetooth connection to the iPhone and my avatar would stop running. So this year, I started using the watch for calories, HR and cadence. Oddly, Zwift will report my time, calories, HR just fine. But my distance is reported in the Apple Fitness+ app as 0 ft. Also, the speed reported to Zwift by my apple watch while I am on the treadmill keeps fluctuating, so my avatar will slow or stop for a few seconds, then run real fast, then stop again; over and over. Maybe there could be a way in the Zwift app to average out my speed so the avatar moves at a steady pace, as I am? Lastly, I suspect this is an Apple issue, but the speed reported is consistently slightly slower than that reported by my treadmill (6.2 mi/hr vs. 6.5), which is no showstopper but is really annoying.
By ELB5898