Dominate your 2020 fantasy football draft. Draft Wizard® is a suite of tools to help you draft like an expert and win your leagues! Created by FantasyPros, the #1 fantasy sports advice and tools provider in the world, this is the only app that will give you expert advice for every single pick and assist you during your real live draft. ----- What do you get with Draft Wizard? *Mock Draft Simulator™* Fast and realistic snake or auction mock draft simulations to practice for your real fantasy football draft. *Live Mock Drafts* Mock draft against real LIVE opponents on-the-go. *Expert Advice* See who the experts would draft for every single pick to help you make the best decision. *Cheat Sheets* Built in cheat sheets based on our ECR (Expert Consensus Rankings) and ADP (Average Draft Position). *Draft Analyzer* See how you performed after each draft to identify your strengths and weaknesses. *Draft Assistant (Live Sync)* - MVP/HOF users only Sync with your live draft to get expert advice on who to pick for each round, while your draft unfolds in real-time. Drafted players will be automatically tracked for you. *Draft Assistant (Manual)* - PRO/MVP/HOF users only Enter draft pick selections from your real draft to get expert advice on who to pick for your team. Assistant Notes: 1. Both the Manual and Live Draft Assistant features support the following league hosts: Yahoo, CBS, NFL.com, MyFantasyLeague, RT Sports, Fantrax, and NFFC. 2. ESPN leagues can be imported into the app, but only the Manual Draft Assistant is supported. Use our Chrome extension on web for ESPN live sync support. 3. Auction Draft Assistant is not available in the app. 4. The app will not make the draft picks for you, selections must be made in your host's draft room interface. *Draft History* Review past draft grades to fine-tune your strategy for the big day. Pause or save an unfinished mock draft to pick up where you left off later. *Auto-Pick* Let our computer algorithms make picks for you so you can sit back, relax, and analyze the draft results. *Custom Draft Configuration* Configure your own league settings and define number of teams, players, and positions. You can also choose your scoring system (Standard, PPR, or Half PPR) or use our web version for custom scoring. *Import League Settings* Simulate your real draft by importing league settings from your favorite league host. *Keeper League Support* (MVP/HOF users only) Track your league's keepers for each team so you can mock draft with settings that are close to the real thing. *iPad Split View Support* Use Slide Over or Split View multitasking on iPad to use Draft Wizard alongside your league draft. ----- FantasyPros is a leader in the fantasy sports space, winning several awards at the Fantasy Sports Trade Association: - Best Service/Tool - Most Valuable Tool - Most Accurate Projections - Most Innovative Fantasy Product - Best New Fantasy Site Upgrade to a FantasyPros premium subscription and unlock powerful draft and in-season features for all sports. If you subscribe from the app, payment will be charged to your iTunes Account upon confirmation of purchase. All subscriptions will automatically renew unless auto-renew is turned off at least 24 hours before the end of the current period. Your account will be charged for renewal within 24 hours prior to the end of the current period at the rate of your selected plan. You can easily manage or cancel your subscription at any time from your Settings after purchase. Cancelled subscriptions will have access up until the scheduled renewal date. ----- Privacy Policy: https://www.fantasypros.com/about/privacy/ Terms of Use: https://www.fantasypros.com/about/legal/ ----- Need help or have feedback? Visit our support center at https://support.fantasypros.com. Follow us on Twitter (https://www.twitter.com/fantasypros) and Like us on Facebook (https://www.facebook.com/fantasypros) for updates and more FantasyPros content. 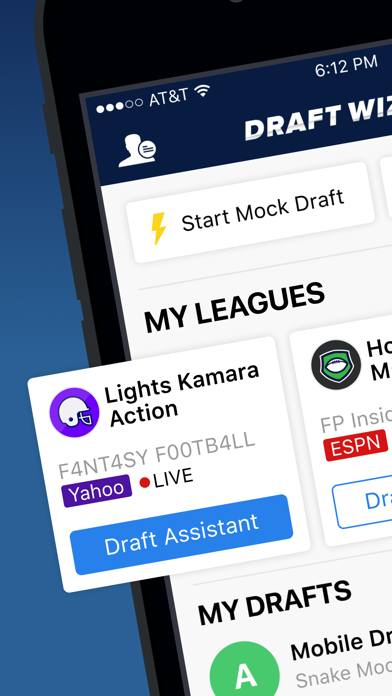 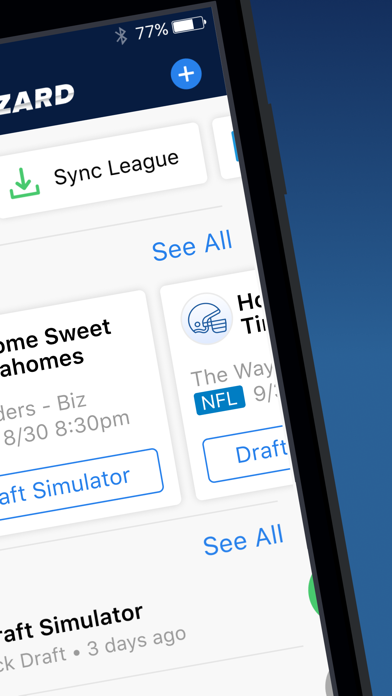 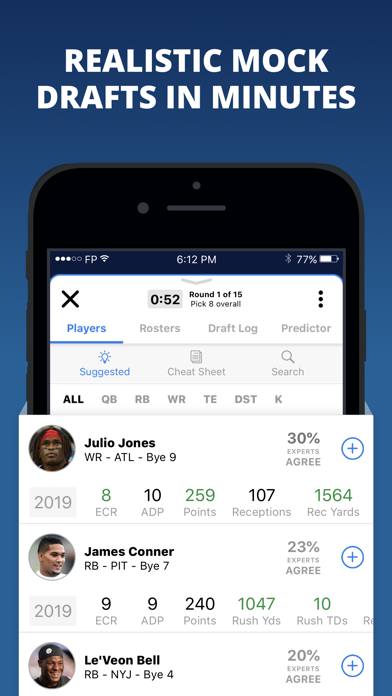 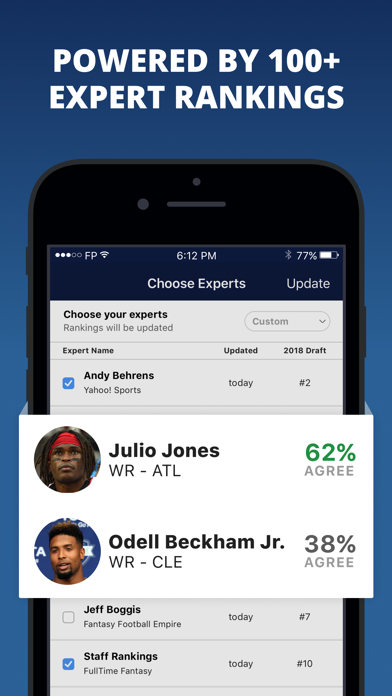 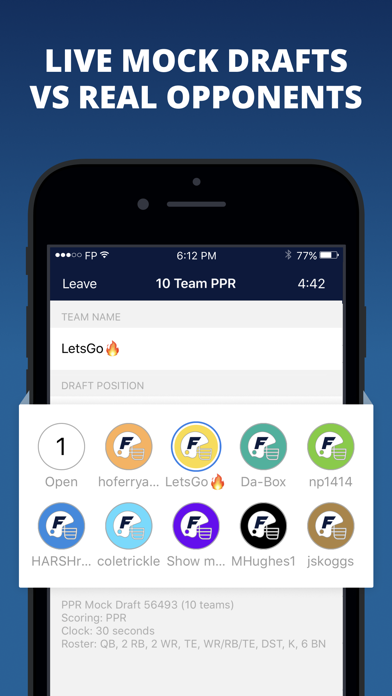 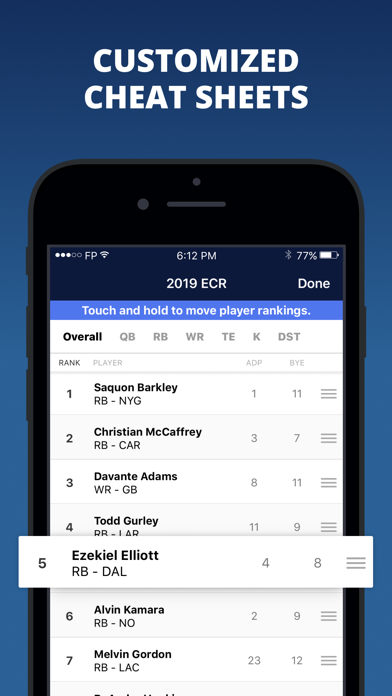 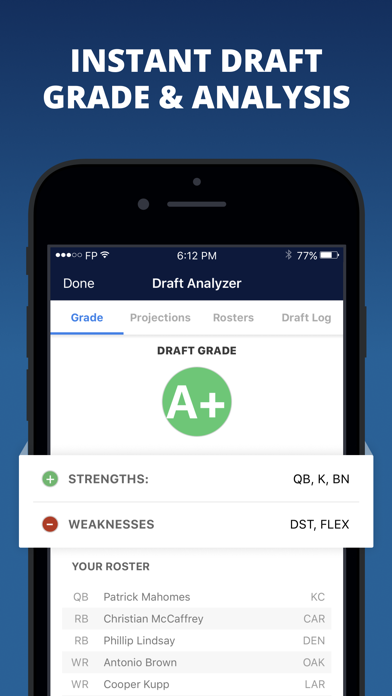 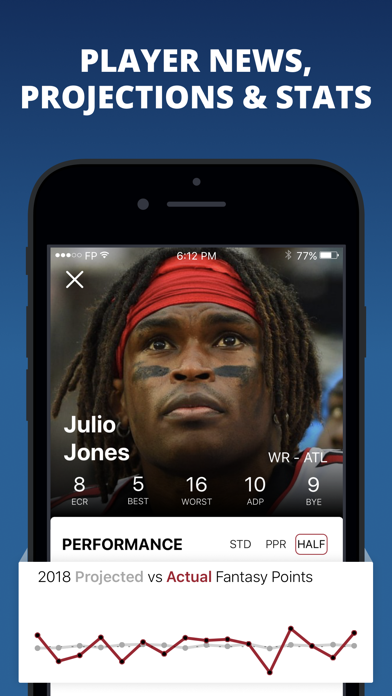 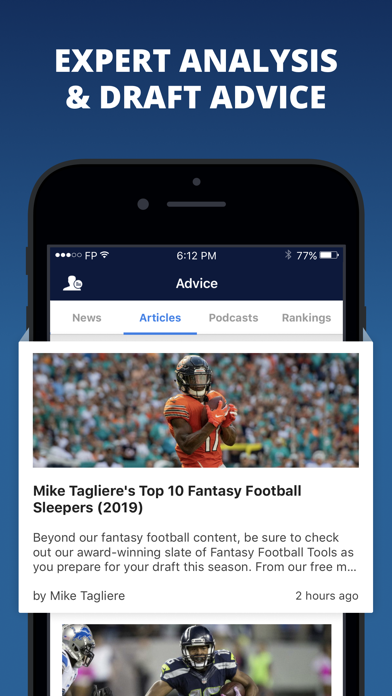 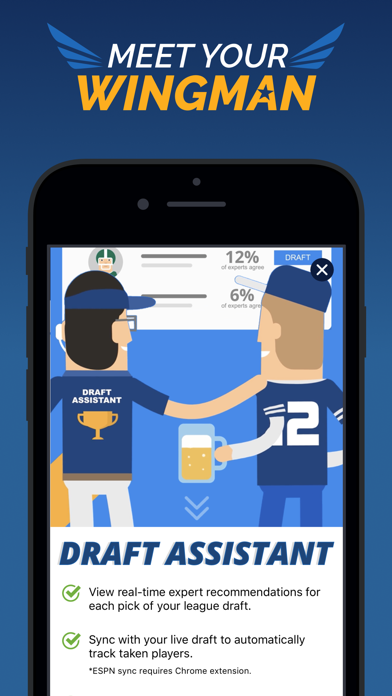 Reliable to an extent. I recommend some changes below.

The cheat sheet customization tool and in draft applicability is great. I do see a common trend amongst these fantasy tool apps/sites....... you require a subscription at all times to utilize the cheat sheet tool. During the off-season, I think it would be beneficial to remove subscription permissions for editing cheat sheets. This would provide those who are looking for a fantasy app to use prior to the offseason to get a taste of the app. I know that you provide subscription incentives for deposits into fanduel, etc.... but I think it would be beneficial for you guys to open the app up for a limited duration of time during the off-season. Creating cheat sheets is fun. It is not fun paying for a service during the off-season. I think the subscription requirement for editing cheat sheets should be delayed until a month or two prior to pre-season. The in season tools are the real value here. If you introduce consumers to the concept by providing full accessibility, you will gain more subscribers during the actual season. I am a competitive fantasy player during the season. During the off-season, I do not pay for subscriptions. I cancel when the season ends. This is a common trend. Allow users to experience the app when the season is not playing out. I think the month before pre-season is the best time to charge. That is when people really crack down on cheat sheets.
By Eclark1

These guys aren’t experts. 97% of “experts” said I should start T.Y. Hilton over Sterling Shepard week 17. Tons of money on the line in my fantasy championship. I swapped out Shepard for Hilton at 12:57 (with the games starting at 1:00). Shepard got me 20 more points while being on the bench, and I lost my fantasy championship by 10 points. Thanks, fantasy pros!
By Jimmy Frederreds

I got Tom Brady and Rob Gronkowiski
By rap joe geary

Get my guys out club
By bfhanifn

The most amazing software

This software has helped me pick two huge drafts making decisions so easy. You don’t always have to follow the suggested picks but it is pretty close especially in the mid to late rounds.
By Centurion Septis

This app has helped me win my leagues the past few seasons. Draft wizard app is a great app. Helps you pick the best players based on expert analysis and that’s fantastic. Another great app is the fantasy pros my playbook app!
By JoshC777

Doesn’t work with ESPN or on phone

Most features are desktop only and it doesn’t sync with ESPN leagues so it’s pretty useless for the vast majority of people. Also, if you pay for one subscription and want to upgrade it, you have to pay the full price of the upgraded subscription, not just the difference.
By Phillips.Dylan

Literally mock draft in 5 minutes, love this app
By Zane in Philly

App crashed on iPhone X in beginning of 3rd round and i had to redo the entire draft. Then in the 11th the keyboard got stuck open, i had to close/open the app and it erased every pick for every team that i submitted & restarted my draft. I gave up and used pen & paper. Complete waste I’ll be canceling & asking for a refund.
By Jugan182

Seems to get overwhelmed with usage at peak times. Froze up, unusable at my draft. Other reviewers made this complaint in prior years. Won’t trust it in future years.
By 183JPC