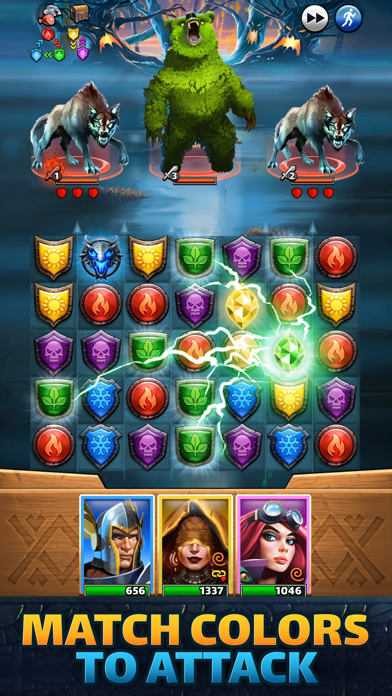 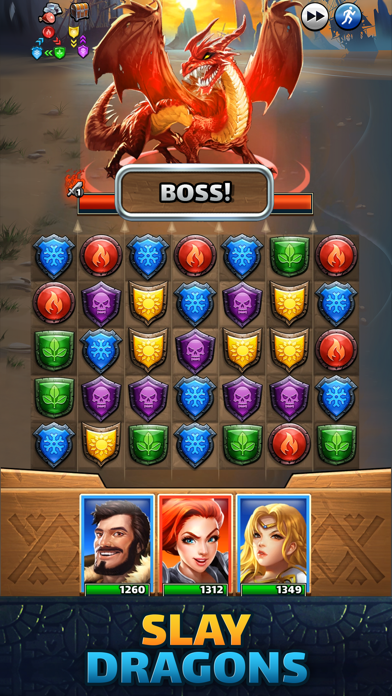 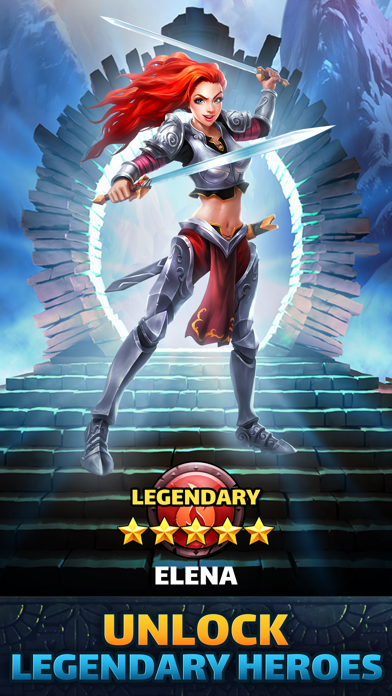 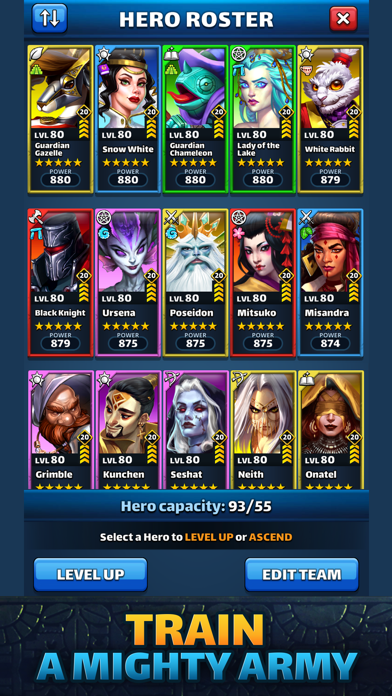 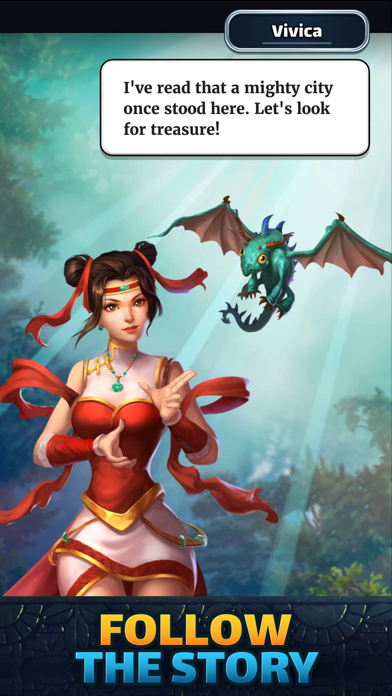 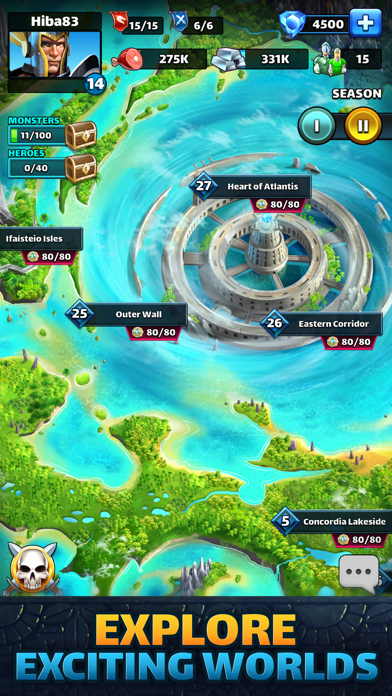 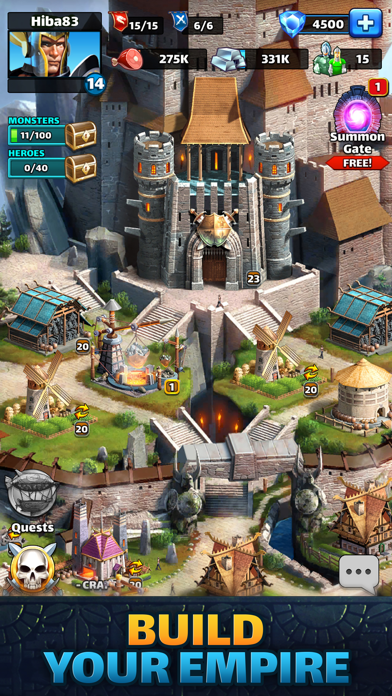 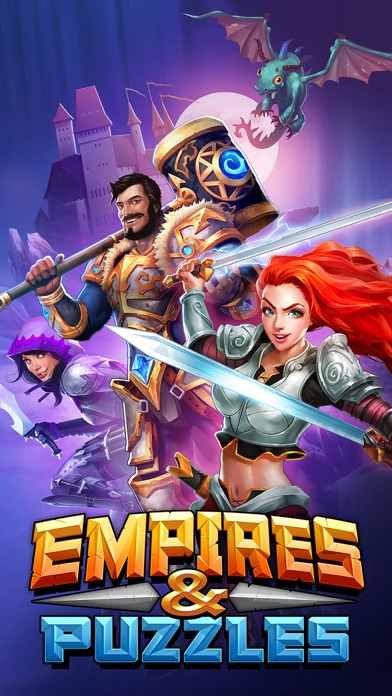 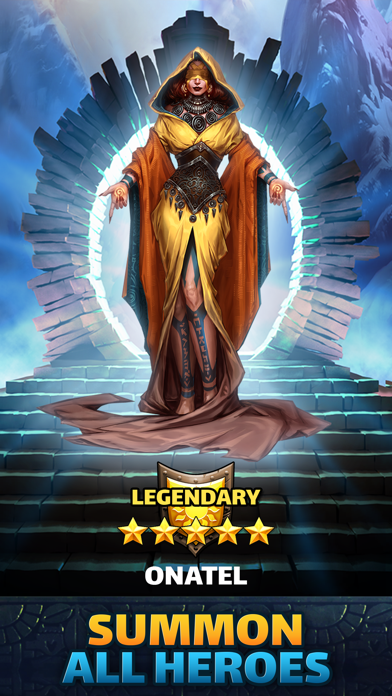 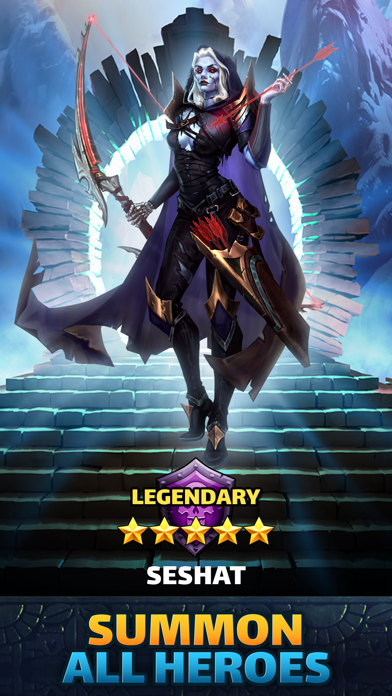 I play this about every day. Recently I have been frustrated by the fact that the game crashes nearly every day, taking with it the game I was part way through, and using up “lives”. This is particularly annoying when I have used a refill, thinking I will be able to complete some challenge, but no, the lives are gone, and I am left having to wait. I do not expect to get back to the same game at the same place, but I would like to have my lives returned, or better I would like a free refill and an apology, but I know THAT AIN’T GONNA HAPPEN. Sigh. May 11,2021. The ad for “EVONY” will not clear away after it is finished. I do not get the “promised” “reward”. Not cool, guys. Not cool at all.
By Susie Sagebrush

I love this game but the one thing I always wanted was a way to give gifts! An idea is that in a alliance you could give gifts to anyone in it that had been in the alliance for a long period of time.
By jfdhfsy

The tutorial is too much. I love the demo, but when I downloaded the game. The tutorial was tooooo LONG. You guys need to fix that. I want to be able to go straight to the Game. Some people might need it. # The Tutorial ( Most don’t) Give us a choice. Nice game wish I could have played it.
By TMoneyG7414

No money no progression

The only way to move forward is spending real money. This game is extremely unfriendly to free to play user. If you do not spend money, you may have to accumulate resources aka gems for over a month for one single summon of here. And yes, it is right, over a month for one summon, with a probability of less than 3 percentage of getting any single 5 star hero. The worst thing is you could not see any progression for more than a year. If you would love play a game where you stay at the same level, and power, same stage over a year, then it is the one for you. If not, right corner, “back” is what you need to do next.
By ThreeYearOfPlaying

Used to be fun

This game used to be a lot of fun. It was fair, sometimes it took a really long time to upgrade heroes but that was what it was. Now, the people developing the game changed it. It’s more about what they perceive to be fair. I can enter a war with a much stronger team and still lose because the tiles were absolute garbage even though they are meant to be random. I can lose 5/6 battles BARELY, and then absolutely destroy a team I shouldn’t be able to. My heroes will be fully charged and then whoa somehow the enemy hits them 5 times with everything they’ve got. It’s not a random tile game anymore because that would require players to have skills at moving the tiles around and making strong attacks. Now it’s you win a few, then you lose a few, win a few, lose a few. It’s all crap and it’s not fun anymore. Check yourselves, game makers. Cause you currently are sucking at making good decisions.
By Disgruntled12335

Until PvP is fixed...

...the game is a waste. All advantage is given to defenders.
By lgrooney

E and P is a very fun game to play. The community of people are a ton of fun and have made some good friends from the game. The bad part is the same relies heavily on using gems to advance the game faster. That’s for completing quest quicker or more importantly getting the best hero’s. Lately the developers have put a lot of focus on costumes to existing hero’s. These costumes were originally brought out to make older hero’s more relevant. Only problem is why should I have to pay more for a chance at getting a costume in a summon portal when I already have that hero? Next issue is the bait and switch of great hero’s. Latest update was nerfing Frigg and Odin on 1/19/2021. Yes the hero’s were strong at release but it’s the developers duty to test these before players spend real money on gems to get them. The same was done a few months back with multiple nerfs to Vela and Teluria. Now those 2 are a shell of the original versions. I CANNOT in good faith recommend for anyone to start this game unless your rich and don’t mind blowing literally thousands of dollars to be competitive. There’s no way a free to play player will be able to compete against the upper tier of players. Even with spending you’ll need a year or more to reach that level. This is really a shame because the game was great when I started but now SG games has gone to a whole new level of greedy. So play with caution
By Charvel74

A Clever Way to Make Money

Generally speaking, this game is decent. There’s not a lot to it: you pick a team, improve their skills and fight other teams and the computer’s AI by matching symbols, all while accumulating random and not so random stuff. Think Candy Crush with an action adventure storyline. The issue I have is how everything is setup to goat you into spending in game resources and real money. Each team has a power level but the power level doesn’t actually mean anything. Anyone at any power level can potentially beat anyone else. A standard team is comprised of five people and the team power level is based on each member’s strength, but you can have a team with as few as one person and their power level could be far less than yours, and they could still beat you. That wouldn’t be as big of an issue if it weren’t for the convenient ways and times that this tends to happen. For example, I always seem to lose to anyone and everyone when I’m running out of team battle points and need to use in game resources or real money to get more. Characters suddenly seem to have stronger defenses and larger health bars. It’s also one of those games that you need to cheat at to get the good stuff or spend a ton of money. Maybe I’m just whining because I’m sick of losing. Maybe it really is just a coincidence that happens consistently (too consistently). Maybe I’m just sick of capitalism and all the ways companies keep trying to get my money. Either way, I found myself getting sick of this game and not in a cool way like when I first played Street Fighter and kept losing to Bison. This is a bad kind of frustration. Honestly, if you get the urge to play a matching game just stick with CC or that Bubble Witch one. Those won’t have you cursing at an invisible enemy.
By Jkbut4real