Enjoy safe and unrestricted Internet access with the world’s most advanced VPN. With NordVPN app for your Mac, you can privately surf the Web and secure your Wi-Fi connections against various cyber threats. Read on for more! PROTECT YOUR PRIVACY Open the app and pick one of our 5000+ remote servers that are located in 60 countries. This will hide your IP address and you will appear to be somewhere else. STAY SECURE NO MATTER WHAT With the NordVPN app on, all your Internet traffic is strongly encrypted and extremely difficult to decipher. What is more - we don’t keep any logs of your activity. ENJOY YOUR ENTERTAINMENT CONTENT It’s nice to know that using the NordVPN app, you can easily access websites and stream your favorite videos, even if they are not available in the country you are traveling. It’s bliss for travelers! JUST CLICK AND RUN Click the activation button to turn your protection on and off. To select a server, simply click on the map or browse the country list. YOU MAY ALSO LIKE THESE FEATURES: -P2P-friendly -No bandwidth limit -Friendly 24/7 support -Automatic Kill Switch -Connect up to 6 devices under one account -Military-grade encryption protocols (IKEv2/IPsec) Ready to go? Try NordVPN for MacOS now! Automatic Renewal • NordVPN is a paid service so you’ll need a subscription to get started. The 12-month subscription plan costs $83.99. • The payment will be charged to your Apple ID Account at confirmation of purchase. • The subscription renews automatically unless the auto-renew is turned off at least 24 hours before the end of the current billing period. • Your account will be charged for renewal within 24-hours prior to the end of your selected subscription. • Your subscriptions can be managed and auto-renewal can be turned off by going to your App Store Account Settings. • You are welcome to read NordVPN Terms of Service (https://nordvpn.com/terms-of-service/) and Privacy Policy (https://nordvpn.com/privacy-policy/) 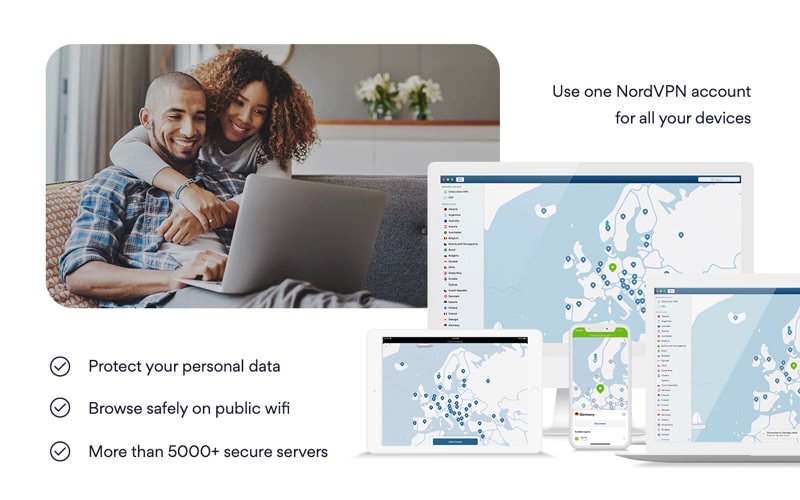 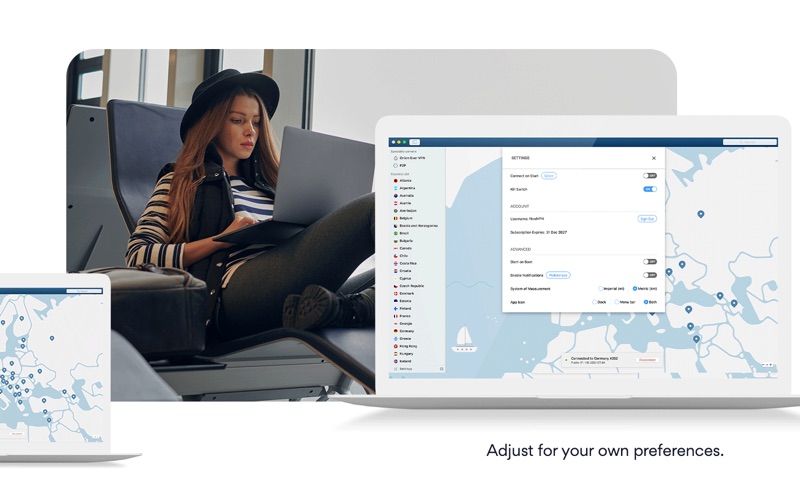 I first started using NordVPN a few years ago and gave up trying after a few months. It was time to renew this year so I gave it another go. Now its extremely esy to use and seamless. Thank you!
By Mweiga

Works well in most cases

The app has been pretty good over the past 2 years. There have been a couple of quirks that keep it from being 5 stars. Most recently there is no explorer to pick your location on an app. Sometimes it disconnectrs randomly. Great for the price overall.
By Corbindinho

I continue to get requests from Safari and Chrome to verify I’m not a robot. Nearly all of the search requests thru Google give me results in some other language (not english) or sent me to results in Great Britain I live in the USA. And the app often states that it needs to access the keychain but when allowed nothing happens. Piece of crap.
By marshcreek

2021 update: I am trying Nord again and its been a while . Went to their chat and was not available . Wanted to try Nordlynx and works well. Hoping for the best have till 2022 in my account. update: I have el capitan on one of my comuters and when started 3year hitch with nord they supported that operating system and now they don't . Nord has been a bummer for me and exposed my IP address 100's of times. Their support is awful and their app has caused me hours of misery , with every update they send brings new issues .(: Don't trust the kill switch with app store version but the native version from their website works well . They sent me an email saying wireguard on all their apps (found out later it wasn't on the native app). Wireguard was alright but sometimes slow and rough around the edges. Although you can't have wireguard on it the native version is much better than the app stores because of the better kill switch . Always though every update brings a new issue with all their apps so buying a three year hitch hey.
By stolendreams

Super-easy setup, installatioin is a breeze --- just download from the App Store. Doesn't get in the way and no impact on speed/throughput, as far as I can tell. You can leave it running all the time, so you're automatically protected; no need to remember to start/stop it. The price is right, too ($3.71/mo for 2-yr). In three words: "It just works."
By BlueLou93

Simply put, it works. I had a very specific need and Nord VPN has met it. The specific server I use is easy to connect to, saved for me, and is very reliable. Haven't had a single issue with it.
By BuffaloFenian

Wouldnt let me log in, i tired the password 14 times and it still hasn't worked.
By oracle___

SIMPLE; it is easy to manage, it is quick and it works! The subscription price is great too. OUTSTANDING PRODUCT
By Ocmi74

it dose NOT work and I WANT my money for one year subscription back.

Frustrated! I tryed all the assistance that I have given and did exactly as the chatt supporters told me to do, but nothing worked. totaly crap.
By Artin84

NordVPN - Best in the Business