TalkingParents is the only co-parenting communication service offering recorded calls. We help co-parents communicate effectively and avoid custody disputes by maintaining a secure, unalterable record of all calls, messages, calendar events, and shared files. Sign up for a Standard or Premium Plan to access the TalkingParents app. TalkingParents Premium Plan Includes: ACCOUNTABLE CALLING ℠ (Available within the United States and Canada) - Make recorded calls to your co-parent - Get text transcripts of every recorded call All TalkingParents Plans include: EASY AND SECURE MESSAGING - Receive instant notifications for new messages or events - See the number of new messages on the app icon SHARED CALENDAR - View and create shared events with your co-parent VAULT FILE STORAGE - Store and share personal files easily and privately UNALTERABLE RECORDS - Download and send unlimited PDF records - Get a 10% discount on all printed certified records PERSONAL JOURNAL - Document and maintain personal notes in this entirely private feature If you do not have an existing TalkingParents subscription plan, you can use existing credentials to upgrade immediately. Your Privacy is our priority. Read the Terms of Use www.talkingparents.com/special-pages/terms-of-use 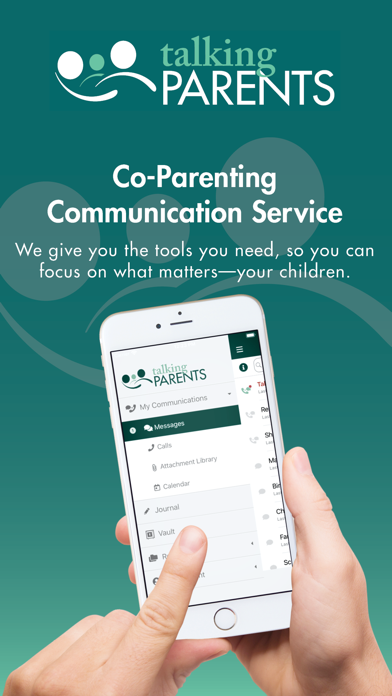 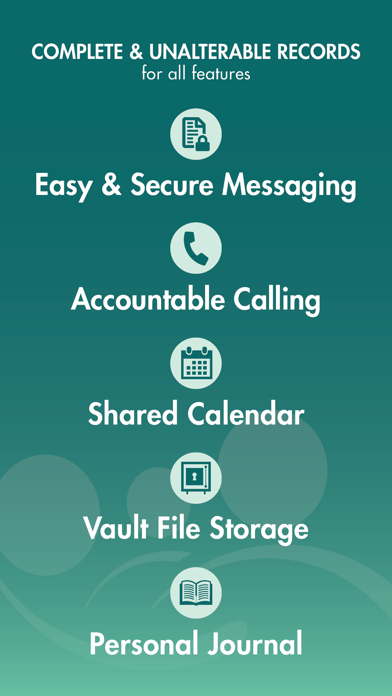 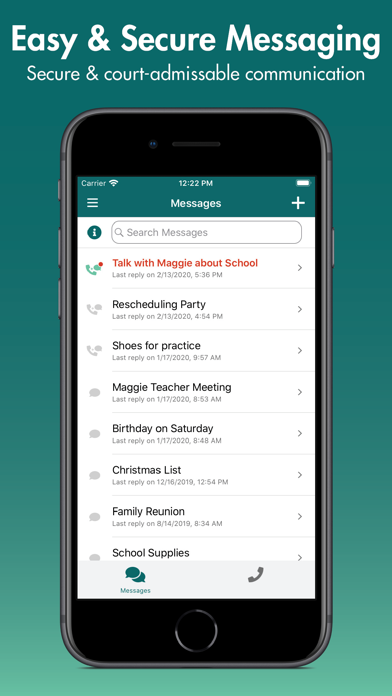 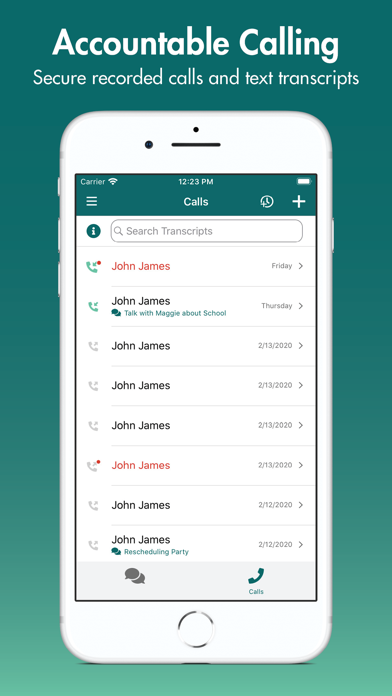 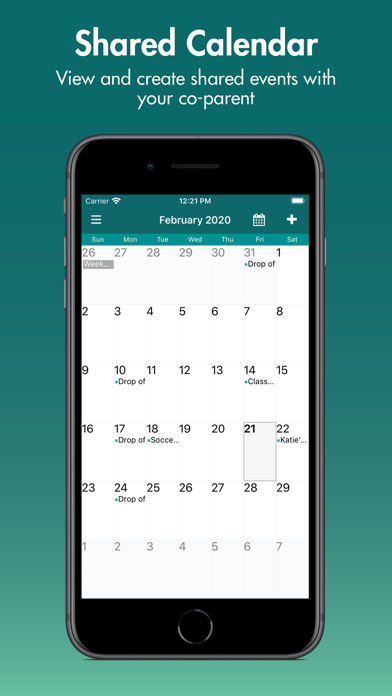 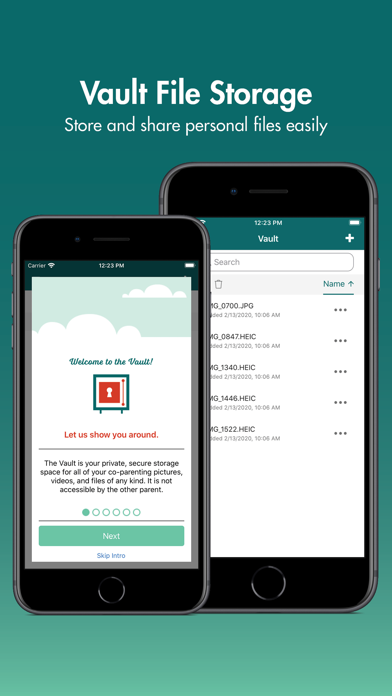 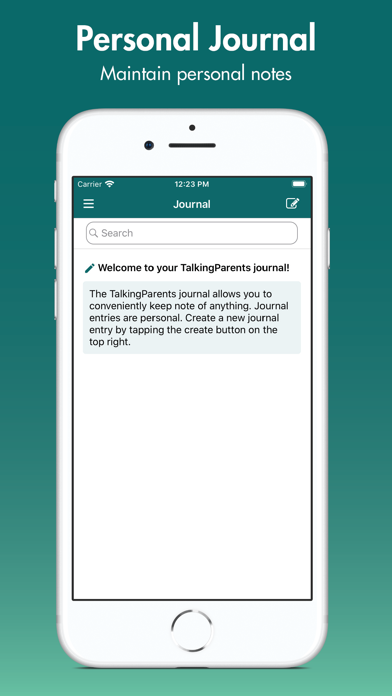 This app is garbage with defects and issues. The search feature is minimal and if you run into issues on subscription they will not adjust cost as other subscriptions services on App Store. They blame apple and ask you to speak with them for refunds. I recommend to not pay for service and take screenshots of the discussions so you don’t waste your money on a lousy service.
By Vmbaho

Massively Flawed and Harmful to Children

Unbelievably this app does not have the ability to set a passcode which is hugely problematic given the content within. In divorce, the single most important thing is to make child-centered decisions but the team at Talking Parents has majorly failed in this regard as they should be taking measures to ensure their technology doesn’t jeopardize this, but they haven’t. My 8 year old daughter was using my phone and she likes to explore the apps on there, and one day she opened the TP app and was able to read all of the contentious communications between her mom and dad (me). Needless to say it was traumatic. I wrote TP about this and suggested they fix this incredibly easy problem by adding passcode protection. They were unresponsive. I wouldn’t be surprised if someone brought a suit against them for this.
By 2x_Daddy

This app is perfect for what I needed it for. I’m glad that the communication records are admissible in court! The time stamps for messages assign accountability. I highly recommend this app!
By Seattle Sophia

Can’t log in. I have a Premium and I cannot log in using the app but I am able to log in on the desktop site. Really Expensive and not worth it.
By FallenKaiser

App crashes and is dangerous for coparents who need reliability

I have had this app for barely a month and it has not worked well at all. The app crashes and messages are not getting to the other party in a timely manner. It’s especially dangerous for coparents who have a contentious relationship and rely on this for communication about children’s lives. Customer service is not readily available.
By ✌🏼ClaudiaCZ ✌🏼

It a bad non free service

I’ve been using the app a little over a year now . This app charges you even if it not in use ever mouth as well as deleting important information without my consent. You also have to deal with the fact the it randomly Kong’s you out and doesn’t let you log in or change your password terrible app.
By 2@#2Pacyeayea

This is absolute crap that there is no Way to preview the app and that settings up a match with your co parent is almost impossible. Should be able to do everything from the app. This company is insane thinking a co-parent program should be from a desktop.
By ZeroRecon

Half of the time is not working. Why does it cost $25 for making 120 minutes call? What a ripoff. And the court requires you to use this.
By Stanley Mosk

we have been using this app since February 2019. In the beginning it was fine and we had no issues. But when they changed it from being $4.99 a month for the basic (which included app access) to being $5.99-$9.99 to have app access, we have had a problem EVERY month! We get charged the subscription and then 2-3 days later we get kicked out of the app and told we don’t have app access with our plan, it take 2 days to get anyone to email us back, after they review our bank charges, we get app access back. Then the next month SAME DANG THING! So frustrated with it, makes me wish I hadn’t requested the judge to order this as the only means of communication. My attorney had recommended we use this app because the other party liked to lie and say she didn’t send stuff, even though I still had the text. Or she would call 15-20 times a day and say nothing, deny it was her but the phone records proved it was them. It’s a big mess but sometimes I would rather deal with that than to keep paying for something that keeps messing up.
By extremely frustrated customers