You must be 18+ to access this game. This game does not offer gambling or an opportunity to win real money or prizes. Practice or success at social gaming does not imply future success at gambling. Do you love playing virtual slots? Are you looking for 100+ big win mobile virtual slot machine games that you can play anywhere? Download Jackpot Magic Slots to enjoy free social casino-style slot games, virtual 777 reel slots, exciting virtual SCATTER slots, virtual progressive JACKPOT slots and virtual slots TOURNAMENTS for FREE! With new games added every month and over 16 BILLION in virtual chips rewards daily, there’s something magical for everyone playing free social style casino-style games at Jackpot Magic Slots! ***ALL new players receive a welcome offer of 100,000 FREE BONUS VIRTUAL CHIPS in the Jackpot Magic Slots FREE social casino-style game*** Why Jackpot Magic Slots™? - Play the best mobile virtual slot games like Raging Reels, Big Fortune Valley, & Jackpot City - Enjoy virtual 777 reel slots, virtual scatter slots, virtual progressive jackpot slots and bonus games that give you more ways to win - Have fun playing free social casino-style slot games like Bison Blitz, Aztec Gold & Lightning Wheel - Love bonus games with your slots?? Each virtual slot machine comes with a BONUS GAME FEATURE – like Ultra coins, FREE SPINS, Hold and Spin and more - We add new slot-style games twice a month - Go VIP! Gain access to premium virtual slots and tournaments with VIP status. Win rewards and prizes! - Win one of 35,000 virtual jackpot rewards EVERY DAY! - Join a club to complete DAILY CHALLENGES. WIN MORE virtual chips and REWARDS, send virtual gifts, compete in club tournaments and chat with friends - Play LIVE mobile tournaments with and against your friends! Play daily FREE and VIP tournaments that offer bonus rewards to winners - Daily Spins – Spin the wheel every day to receive FREE VIRTUAL CHIPS - Bonus Games! Each mobile virtual slot machine comes with a BONUS GAME FEATURE – like Ultra virtual coins, FREE SPINS, Hold and Spin and more Daily Tournaments At Jackpot Magic Slots™, we’re ALL about social play! Join daily tournaments to play against friends or compete with rivals. Create virtual private tables to chat with your pals or join a public tourney to meet new friends. Create your very own custom AVATAR to make an even BIGGER impression. Join a Club! Clubs are a great way to play with friends, meet new ones, chat, share, and compete as a team. All Club members will earn extra virtual rewards each time your Club completes a Daily Challenge. Don’t just play alongside your friends…play WITH them! ***Welcome Offer*** New players receive 100,000 FREE BONUS VIRTUAL CHIPS to play with. Jackpot Magic Slots™ brings you exciting social casino-style games & virtual slot fun so you can take your mobile slots excitement with you! Enjoy lucky spins and big wins – it’s free virtual slot-style action at your fingertips! Download today to make a splash and enjoy the thrill and excitement of huge virtual REWARDS, and jackpots, FREE daily games, BONUS mobile slots and much, much more. For all the latest info on freebies, tournaments, new mobile virtual slots and more, follow our social pages: Facebook: facebook.com/jackpotmagicslots YouTube: youtube.com/jackpotmagicslots Twitter: twitter.com/jackpotmgcslots Instagram: instagram.com/jackpotmagicslots/ Questions? Suggestions? Contact us at http://www.bigfishgames.com/help/jackpotmagicslots By downloading and using this app, you agree to the Terms of Use at http://www.bigfishgames.com/company/terms.html and acknowledge the Privacy Policy at http://www.bigfishgames.com/company/privacy.html 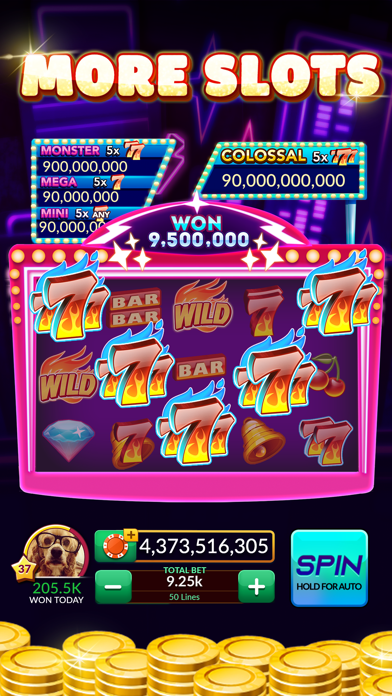 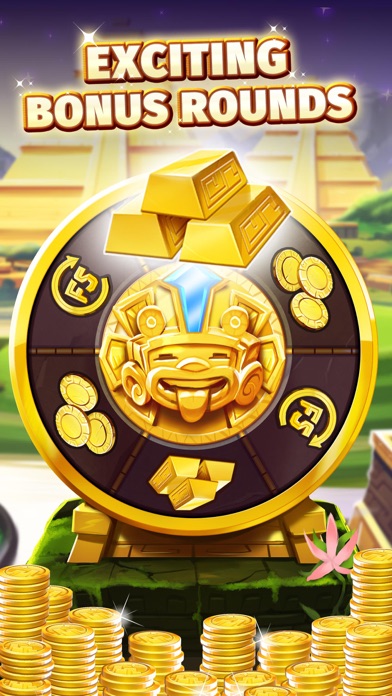 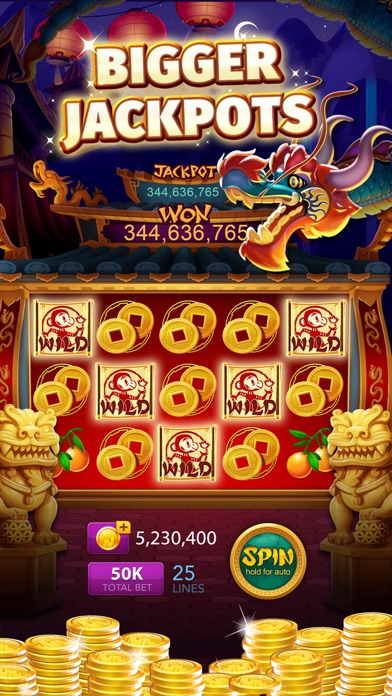 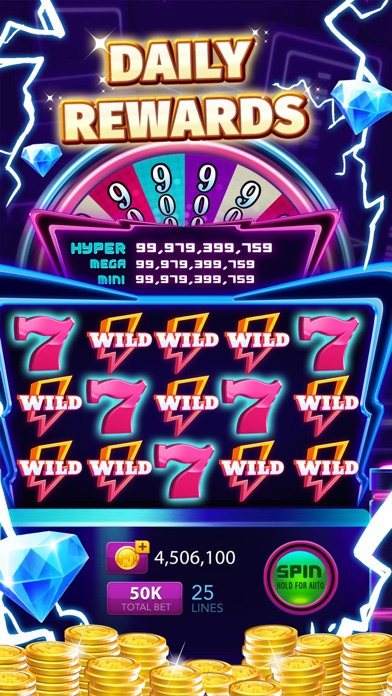 BF only care about money and never give me Coin or big win. Bad game
By Saint the matrix

Here’s how this goes. If you look at all of the players bios, you will notice a similarity. On average, every three spins, you will lose two and win one. A “win” is also considered a spin that just equals your existing bet. There is absolutely zero point in buying coins. Don’t buy them. There is no benefit and no advantage. Regardless of how many coins you buy, it appears that the general rule is that you will receive only one third of what you put in. Until your coins are gone. There are no winners in this game. All of the bios I looked at closely, resemble each other. The socialization is fun but be prepared to be bullied. When you are bullied by other players, and you most likely will be, contact customer service and they are good about attempting to stay on top of that. There is only so much that can be done. They can’t prevent it. The game was set up that way and there are way too many bullies on here to stop it from happening. You also have the choice of using only private rooms to prevent harassment from others. But, if you’re going to play alone, go with an online game with better odds. There are plenty of them. If you play for the socialization, this is a good choice. Just know that the socialization will be both negative and positive. You don’t just get the polite and nice people. Racist comments, sexual harassment and much, much worse, go with the territory. You can’t avoid it and you will witness it and it may be directed at you. So, be prepared for that. You can report it and it will be addressed but there is only so much that can be done and the racist and sexual harassment is RAMPANT. All in all, play at your own risk. The game is fun, but know what you’re getting into. Be aware that this game was designed to pressure you into buy coins. You will never get ahead. You will lose. It’s the nature of the beast. If that works for you, go for it. Update: I did a little experiment. I purchased $200 worth of chips this week. I made small bets. Out of the $200 that I spent, I never received much of anything in return. Update: I’ve spent over $1000 in real money. I’m going to keep updating this review. I’m curious to see how many times I buy coins only to be rewarded with a losing streak. Update: Last week, I started with 15 million coins. I hit jackpot after jackpot. My coin balance was almost 5 billion dollars. It was so much fun, spinning and winning. It was a good week. Update: Purchased $200 in coins. They are half gone with zero wins. Two tiny worthless, wins. I’m feeling used and abused. It’s just zero after zero after zero. Update: After purchasing $200 in coins, I was almost at zero balance, with no wins. Thankfully, things turned around. I did great for four days. Not epic jackpots but enough to spin, win and have loads of fun. I feel like I received my money’s worth in fun this week, so I’m happy. I am going to start noting calendar dates in my updates, purchasing coins and updating the outcomes, once a week. February 21...spent $150 two days ago. This is the worst that I have been treated. The worst! All that money with no wins worth mentioning. Zero after zero after zero. I know a lot of the players on this game. The joke right now is that we are paying for their food, their nannies and their vacations. We support this business. The joke is that since it’s tax season, we are now expected to pay all their taxes too? Nobody is winning. Everyone is losing. Everyone is complaining and we all feel that we are being treated with complete disregard and right now, there is zero appreciation for the players. I hope that things change and I can report that things are turning around and that things are at least fair. Everyone I know on this game is simply disgusted right now. I will update again soon. Update: 2/27/21 This is the worst that I have ever been treated! $150 spent. Nothing in return. Unbelievable. Zero appreciation. Totally f*cked over. I can’t understand how anyone can be treated so horribly when they are buying thousands of dollars in chips. Update: 3/9/21 I purchased $50 in chips. No wins. Gone immediately. So $400 in two weeks with NO real wins. $400!!!! Update: 3/9/21: I bought $100 chips. I will report results. Update 3/11/21: Yesterday when I logged on to the game, I received a notice that 15 million dollars has been deposited in my account as a token of appreciation. This happens sometimes. It’s sweet. A very nice gesture. Update: 4/8/21: I have been having a lot of fun lately. I placed 7th in a tournament and won almost 700 million dollars. Ive been hitting a lot of jackpots. I’m really enjoying the game. Its so much fun to play when you're winning back money and can keep spinning. Its been this way for weeks now. Everyone on my team is happy and loving the game. Thank You, Big Fish!
By Addict Love

Royal aggravation app ,, bfc L’ost its mojo ,, a waste of time app ,, spin for nothing,, what the shkank bf ?
By IDForces

Need more wins, so I can enjoy game.
By one an none

This is the absolute BEST SLOTS GAME that you can download. It is so much sheer jubilation when you HIT HUGE payouts, the graphics, the selections are all top notch. I find this game has been constant friend during these pandemic times, I’ve met some really cool and supportive people here. Thank You 😊 developers of this wonderful fun slots game.
By Hunni bunnzz

Should not be in the App Store it’s all rigged and a huge scam.
By scamlab

Never keep bank, will drain you
By Earn it mfr

Whatever you do don’t BUY into this game your winnings become zeros just to get you to buy more coins. Never seen a game that blocks peoples wins just so you will purchase more and more coins. It’s a SCAM that’s why they have had lawsuits against them, google it and see. I gave them the benefit of the doubt for many level ups but never changed only no gains or fun.
By DyAn G

Christmas Stories: The Gift of the Magi

Sea of Lies: Beneath the Surface

Surface: Alone in the Mist - A Hidden Object Mystery

Labyrinths of the World: Stonehenge Legend

Bridge to Another World: Alice in Shadowland