Transfer your music playlists from one streaming service to another in a few seconds. Are you dissatisfied with your current music service provider? Would you like to try a new streaming music platform? Do you want to move to another one but you hold back the decision every time you look at the size of your music and playlist collection? Would you like to transfer music playlists from one streaming service to another? Too many music services don’t make it easy to transport your playlists, that’s why we have made FreeYourMusic app. #FreeYourMusic comes with the right help! Save countless hours on recreating your collection in a new service and continue enjoying your music! FreeYourMusic scans your playlists and imports them from a range of different music streaming providers; so far, we can move your music between Spotify, Tidal, Amazon Music, YouTube , and more! Current Supported Music Services: ● Spotify ● Apple Music ● YouTube ● YouTube Music ● Tidal ● Amazon Music (Unlimited or Prime) ● Pandora ● Google Music ● Deezer ● SoundCloud ● Qobuz ● QQ Music (QQ音乐) ● Yandex Music (Яндекс Музыка) ● Anghami ● Napster ● VK Music (VKontakte Music / BOOM) ● Zvuk (Звук) How it works: 1. Select your current music service 2. Select your music service destination 3. Pick which playlist you would like to transfer. 4. Start to transfer your songs. 5. Voilà! It’s done. Sounds too good to be true? See for yourself by transferring up to 100 songs for free between any of the supported services. When you see how well it really works, upgrade your account and move as many songs as you want! Start to transfer your favourite music lists and playlists between music services now! Transfer your songs wherever you want. You are considering testing a new music streaming site but the concerns about moving your favourite music playlists are holding you back? If you use our application, you will no longer have this problem. Thanks to our mobile app, you will be able to easily transfer your favourite music lists to your new music service. Import your favourite playlists and transfer them to another music service in a few seconds. Shift your playlists across many popular music services. Media which wrote about our mobile app: ● The Telegraph ● Yahoo ● Cult of Mac ● Lifehacker ● Mac Rumors ● Gizmodo ● Gadget Hacks, ● MakeUseOf ● Make Tech Easier ● BGR ● Product Hunt ● Digitalika 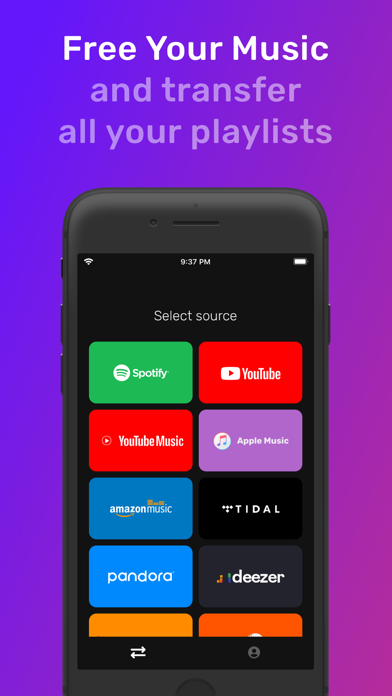 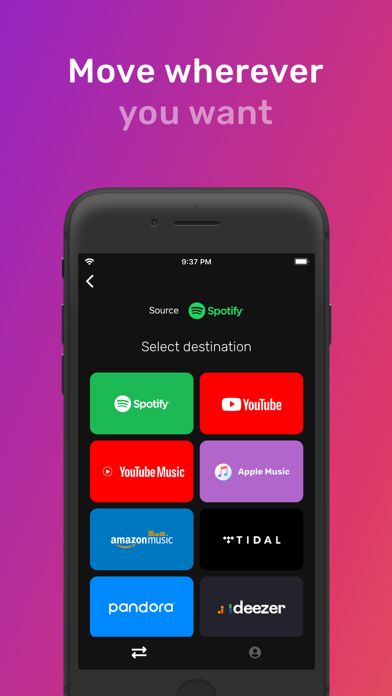 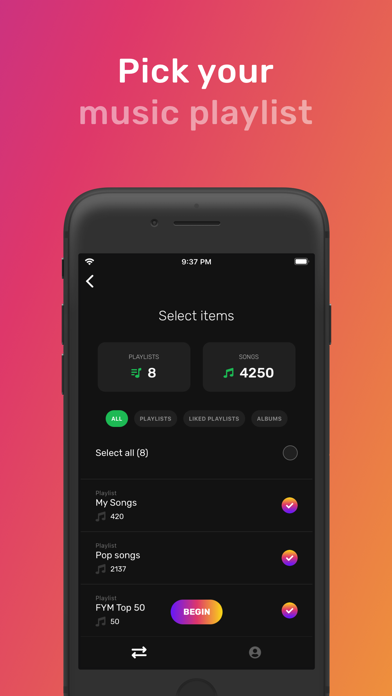 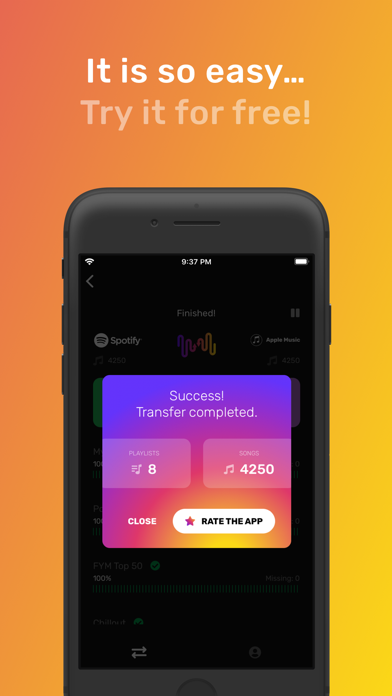 I use with another app for video editing.
By AishaMakesBariki

It worked for two of my smaller playlists like 20-50 songs, but then it stopped working for every other transfer.(Spotify to Apple Music) I had even paid for premium to do more transfers but it didn't work. I'm extremely disappointed I've tried everything to try and get the app to work again including multiple redownloads, restarts etc and nothing worked. Hopefully this isn't happening to everyone as of recent, I know other apps are being targeted.
By Shigaria

App works perfectly but you have to buy the full version if you’re like me and have big playlists. 100% worth it tho
By AddMeOnMyspace

First off, the app works perfectly. Easily transferred all my music from Spotify to Apple Music, even kept the playlists too. There was another app that claimed to do the same thing but but for some reason you couldn't use Spotify as a source on that one. This app came in clutch and did everything I needed it to/claimed it could do. My only gripe is that they don't make the price upfront from the beginning lol. I didn't mind paying for this because it was completely worth it, but I think as a business you guys would go along further if you were more transparent about your services. Other than that, great app and thanks for making what would've been a grueling, day long task only a couple hours of setting my phone on the table and doing the work for me 👍🏽
By Supreme Naim

I’m trying to move my playlists from Amazon Music to Apple Music and I can’t pull it off. For one thing, it takes multiple attempts to log into Amazon music, telling me there is a problem validating my authentication after typing or copying in my OTP. When I finally do get in, it shows all my playlists. It will go through the motions of copying these playlists, complete with status bars. However, it shows 0 songs and when I open Apple Music, neither the playlists nor the songs are in the library.
By rclarksworld

It worked amazing and quick

I switched platforms from apple music to spotify and I have over 1200 songs in spotify that i had organized into playlist. There was no way I was going to be able to manually switch them all. The app only lets you transfer 100 songs for free. The reason i’m giving it 4 starts instead of 5, is because they charged 8 dollars for switching all the songs
By Argelia-f

This app is fantastic
By Kate1862

it says “initializing app” for 45 seconds then crashes to a white screen.
By Jcwgirl

Screen just turns white after "initializing". Just bought this yesterday then this happens. It's like I just threw away my money.... Plus it doesn't really find the music good enough. But most of it are transfered.
By Momojojo777777

This app works just like it supposed to!
By TheJaker007