Escape to an island getaway filled with adventure, mystery, and fun new mini games from the makers of FarmVille, the number one farming franchise! Play this colorful free-to-play game, now available for iPhone, iPad, and iMessage app. Build your very own beachside inn complete with island workshops, tropical crops, and exotic animals. Farm island fruits like pineapples, coconuts, and mangos to delight your guests. Craft delicious recipes and rare goods like piña coladas, grilled fish, and flower leis. Catch fish with Capri the dolphin and explore with Odney the playful monkey! Feed tasty treats to the cute, playful animals on your island to get unique photo ops for your guests. Story-based quests help you explore uncharted areas, learn more about your island and find rare items and goods. Adventure unfolds all around your island! ESCAPE TO THE TROPICS - Seek adventures on your very own tropical island - Farm unique fruits and veggies, craft fun drinks and meet adorable animals - Discover all of the tropical crops and exotic animals that call your island home - Run a beachside inn and start a new life in paradise - Play mini games and have fun with new characters like Ting UNCOVER MYSTERY, SECRETS AND TREASURES - Complete story-based quests with island guides like the archaeologist and surfing expert - Explore the bubbling volcano and ancient monkey temple - Discover hidden treasures and rare goods in the secret chamber - Investigate uncharted areas to find even more island secrets BUILD AMENITIES FOR YOUR GUESTS - Fix up island workshops and create your own personal paradise - Buy a Tiki Bar, Sushi Stand, Artisan Workshop and more - Expand your inn and hire guides to help your guests enjoy the island DISCOVER AND PHOTOGRAPH ADORABLE ANIMALS FOR REWARDS - Build a Wildlife Center on your island with the help of Ting, the wildlife guide - Attract rare and exotic animals to your island like the colorful Iguana by feeding them treats - Earn rewards by snapping photos of the animals as souvenirs for your guests TRADE WITH OTHER ISLANDS - Trade with other players using the trade boat - Short on eggs? Buy the goods you need from neighboring islands - Have too many pineapples? Name your price and sell off extra crops and crafts - The more coins you have, the more you can do on your island Escape to a shimmering world of sunshine, adventure and fun in FarmVille: Tropic Escape! Download today and start building your island paradise! ADDITIONAL DISCLOSURES • For specific information about how Zynga collects and uses personal or other data, please read our privacy policy at http://www.zynga.com/privacy/policy. • This game does permit a user to connect to social networks, such as Facebook, and as such players may come into contact with other people when playing this game. Social Networking Service terms may also apply. • The game is free to play, however in-app purchases are available for additional content and premium currency. • You will be given the opportunity to participate in special offers, events, and programs from Zynga Inc and its partners. Use of this application is governed by the Zynga Terms of Service, found at http://m.zynga.com/legal/terms-of-service. Collection and use of personal data are subject to Zynga’s Privacy Policy, found at http://www.zynga.com/privacy/policy 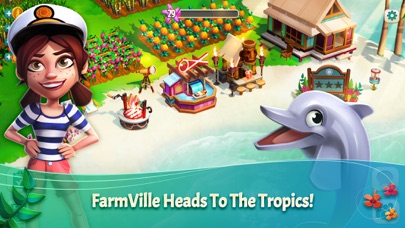 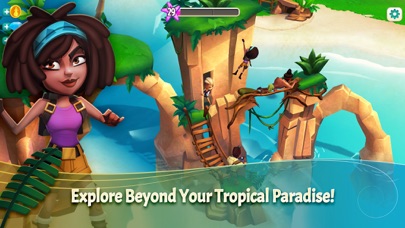 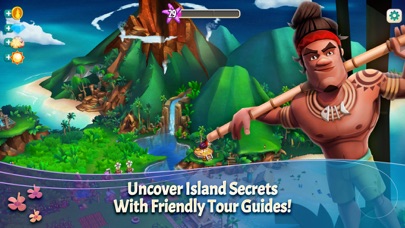 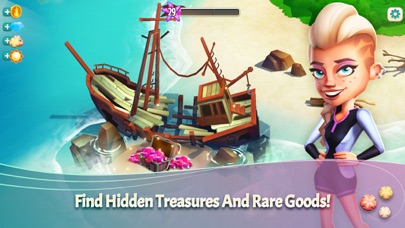 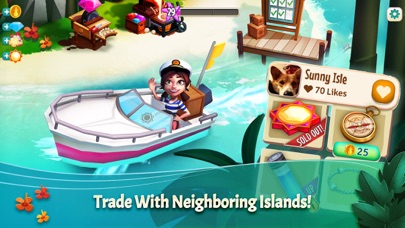 Last update over wrote my island with a different game, left me missing over $125 in in app purchased items, company has not restored my game, and now will not even return my calls or email. Is this what you can expect next time they change the game? Zynga, your customer responses are just random reply’s, I don’t think any one is home anymore, you all got rich off us, then walked away
By zzzghuko

Fun game but a few problems

I’ve played the game fora few years so I do enjoy it though your games are pretty hard to win and I have never gotten the jackpot on the wheel??? Rigged?Chat room hasn’t worked all day
By Game girl Cindy Jean

I am a daily player for several years now, and on several different devices. I’m a little perturbed of late, with some issues (or new “features”?) I’ve noticed the last few months, that when you go into the main storage building, there were times when there were no “x” next to any items, so you were not able to discard any items. There are times when you have items that you acquire through games and tournaments that you can’t sell...and they never go away when you. Now, for the last several days, there simply is no x whatsoever. So, how are we supposed to get rid of items in the silo or main building storage, if we can’t sell them or discard them? Please let me know...it is getting quite frustrating as I have nowhere enough items to upgrade storage, and I am running low on space.
By Wolfstar4

I love this game but I wish they wouldn’t force you to update the game when they want you to. I’m usually in the middle of something when I have to stop and update because it’s the only way to get back to playing. I have slow internet so it can take hours for my game to update and that’s hours that I would rather be working on my island.
By tacogrrrrr

Where is the cosmos dog?

I lost my game

The update will make you start over on your tournament and mess up your cruise count. It also messed up the workshop so you no longer get 3 minutes on the machines you load up when it ends. The items go to normal time. They jump the gun on new events and don’t work out the glitches first.
By Mrs smitty

After starting the enchanted area, cannot figure how to use. Can use it in tiki bar but no where else and to fill orders to send off in the boat
By mrfriertuck123

Love this game but...

I’ve been playing this game almost daily for over a year and never once have I ever hit the [seemingly non-existent] “jackpot” when spinning the wheel. I’ve spent way too much money on this game, and I’m sure thousands of players have too, so don’t we deserve a jackpot now and then? I’m sure it’s coded to never land on the jackpot (which is almost like false advertising but in application design) but I expected a higher level of integrity, fairness, and mindfulness from a company like Zynga. (This opinion is based on the 20+ years I have as an IT project manager for a wide variety of huge projects, but never in the gaming industry.)
By cupcakeLVR

I absolutely hate this new island! Like seriously. What’s the point of this? This whole ether thing is a real pain in the ***. If this island because a regular part of the game, I’m probably going to not play as much.
By Megess