Instantly report lake ice conditions at your current GPS location to other fisherman. Ice Report makes it easier to distribute information about lake ice thicknesses during the ice fishing season in Northern climates. Without this app users are left to scour the internet for forums or groups to get a report on ice for fishing. On the flip side, avid fisherman and resorts who help the community by reporting ice conditions can now post it for everyone to see. New reports are dark in color. Any report older than 3 days will be marked light in color. Ice Report defaults to showing reports made in the last 7 days. To use Ice Report simply login and check out the map. Keep in mind the Display Name you choose will be visible to other anglers. If you are out fishing, feel free to submit a report by pressing the + sign and selecting the ice thickness you measured at that location. The app uses your current GPS location, so please only submit reports while you are fishing. Premium users can place icons without GPS. If the report is in the wrong spot, select your report, then press the Delete button. Use the calendar icon to view reports submitted within a date range. The lake ice data is submitted by users and there is no guarantee of accuracy. Ice Report encourages every one to be safe on frozen lakes. Check with your local Department of Natural resources for safety information. This app uses Google Maps for iOS. 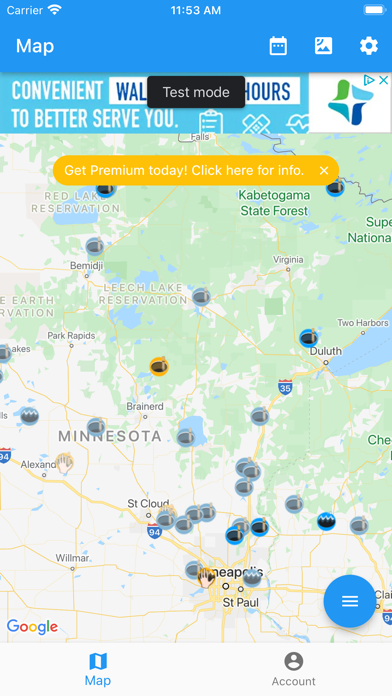 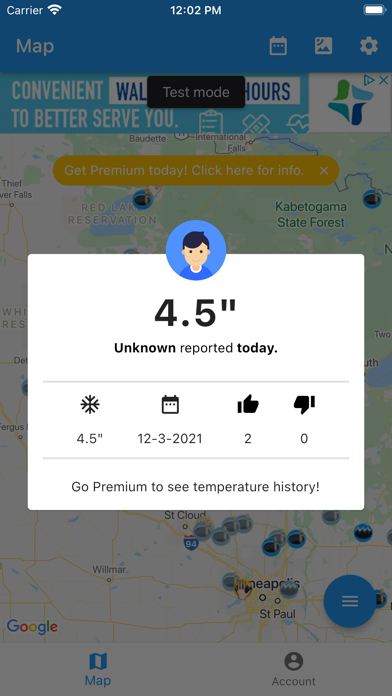 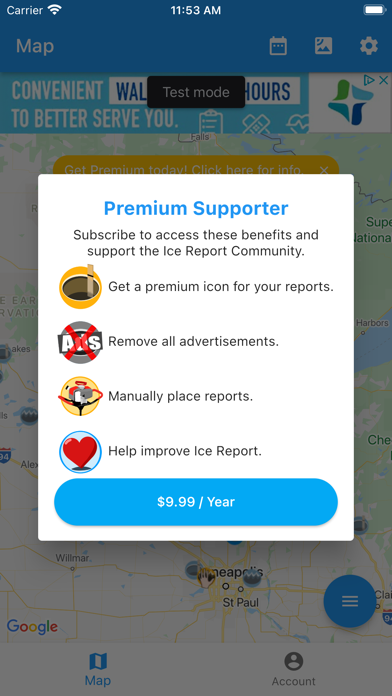 This app would be great, except for one thing, the entire purpose of it is ruined by a $9.99 a month subscription fee , sorry but I’m not going to pay $120 a year to tell someone else where the ice is. It would make so much more sense for you guys to include only you’re gps location area maybe with a radius of say 50-75 miles and if you want to see ice report further you them pay the $10 for premium. I believe the main idea for this app isn’t just about finding ice , but having an idea of how safe they are on it. You’re app gives the option too , but doesn’t let me help you with that goal.
By will2043

Great app except you can’t add an ice report when you get home unless you buy the premium. I get it that some may file false reports but that is why you can verify the reports of others. You’re loosing out on reports from people that forget or don’t have service when fishing. I’m out there to fish not play on my phone.
By Mesa3578643257

App does not show on my phone

I have to go to App Store each time to download it for me to use. App does not show up on my App list.
By Disgusted with Arlo

Use this app all the time

Really helpful. Wish more people used it. And also don’t be afraid to disclose your secret spot; we all have the same goal - catch fish.
By AHeapOLivin

Love the concept of the app. Unfortunately the app will only be as good as the amount of people that utilize it. My advice on that part will be is, Please tell your friends about it so we can get more reports. Only issue I’ve had is I can’t get a profile pic to stick in the account tab.
By Michael A. Curcio

I installed the new version and the map won’t load. I’ve reinstalled and still nothing.
By e dubs 4

After update, App does not work.
By HarkInMN

This app was awesome. I used it all the time last ice fishing season. Now with the new update it won’t load the map and is essentially useless. Very disappointed.
By bigrod1987

Was a good app

App was working fine a couple days ago. Now when I open it up all it does is spin and do nothing.
By hammer175