Mutual is the largest and fastest growing dating app for members of the Church of Jesus Christ of Latter-day Saints (LDS/Mormon)! Mutual is a place where single members of the Church can make meaningful connections that lead to real dating. The app was created by BYU grads who know how difficult it can be to meet others with similar interests, beliefs and standards, especially outside of Provo. Mutual offers features that help you get to know other singles beyond their profile photos, by highlighting information such as mission location and interests you share in common with potential matches. The Mutual team is committed to upholding the standards of our faith, and making Mutual a genuine and safe place you can trust. All profiles get reviewed before entering our community. Users are encouraged to verify their profiles before meeting in person to ensure they are who they claim to be. We also make it easy to report inappropriate behavior in the app, to maintain a positive environment for everyone. In the words of Brigham Young, "This is the place." MUTUAL UP - MORE FEATURES Upgrade to Mutual Up for access to exclusive new features, including: See Who Likes Me to see who has already swiped up on you, Profile Boost to be seen more often and match faster, Ward Hop to change your location and match around the world, Unlimited Double Takes to undo past swipes, Ninja Mode to go invisible to everyone except people you swipe up on, More Filters to filter by height, and Daily Notes to stand out and increase your chance of matching. ------------------- Mutual is free to use, but if you choose to purchase Mutual Up, payment will be charged to your iTunes account, and your account will be charged for renewal within 24-hours prior to the end of the current period. Auto-renewal may be turned off at any time by going to your settings in the iTunes Store after purchase. Current Mutual Up subscription prices start at $7.99 USD/week and one week, one-month, 3-month, and 6-month packages are available. Prices are in U.S. dollars, may vary in countries other than the U.S. and are subject to change without notice. No cancellation of the current subscription is allowed during the active subscription period. Privacy: https://mutual.app/privacy Terms: https://mutual.app/terms The services offered by Mutual LLC are neither made, provided, approved nor endorsed by Intellectual Reserve, Inc. or The Church of Jesus Christ of Latter-day Saints. Any content or opinions expressed, implied or included in or with the services offered by Mutual LLC are solely those of Mutual LLC and not those of Intellectual Reserve, Inc. or The Church of Jesus Christ of Latter-day Saints. 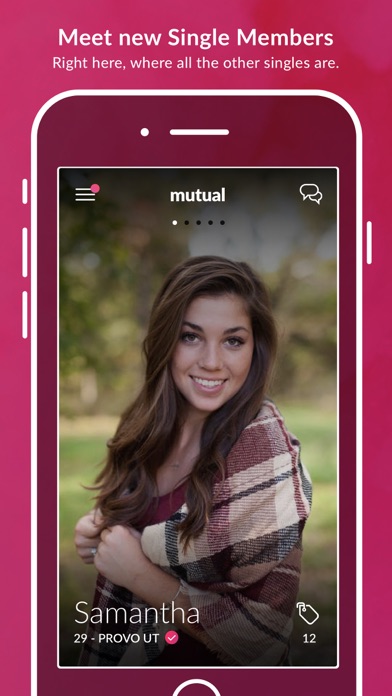 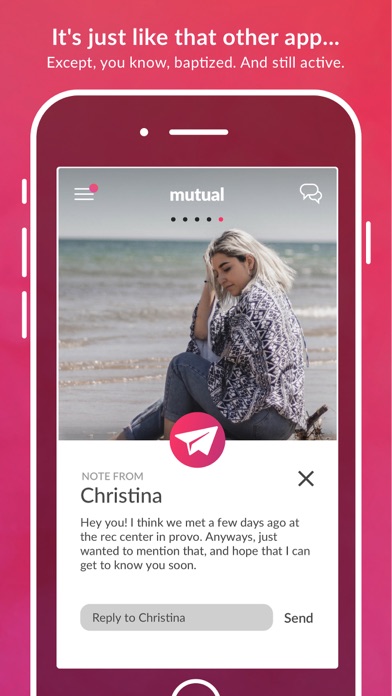 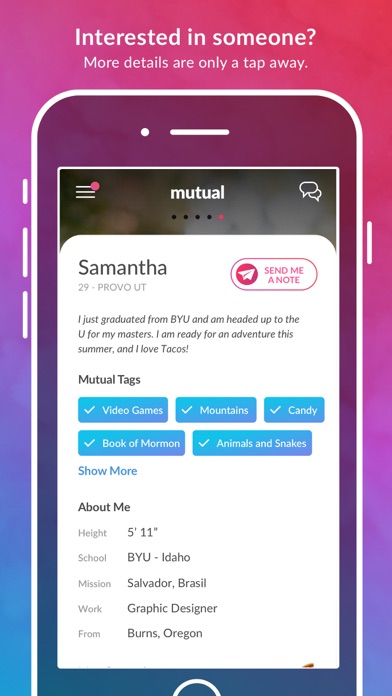 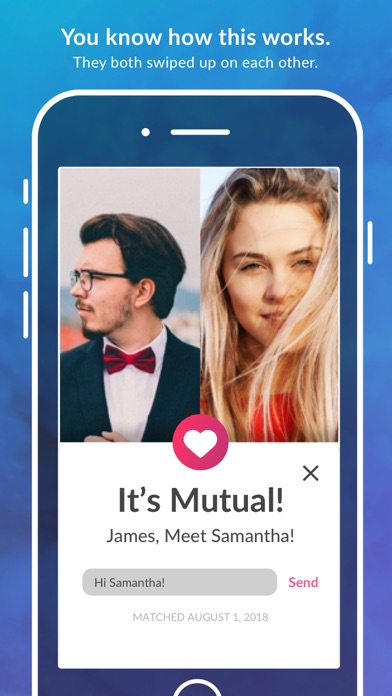 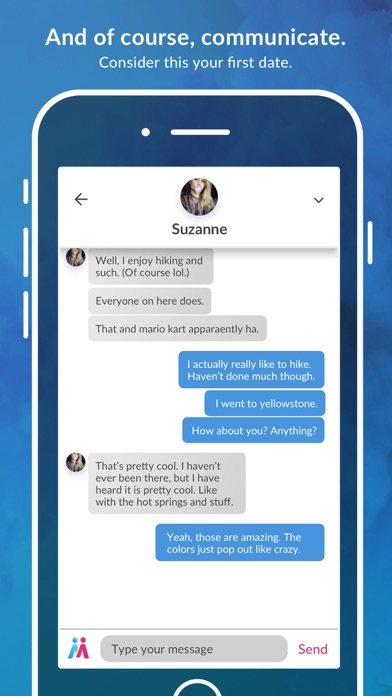 Whom am I speaking

So this app ain’t completely stupid. However I wish it had longer profile explanations or short 1-5 minutes introduction videos. Plus I’ve been pranked by two idiot boys. 😡😒. Still looking for love, but again not bad.
By shady man 1

Great but could be better

My husband and I managed to reconnect after 7 years on this app! We met up in Croatia last summer, after a few months of FaceTime chats and texting non-stop. So glad we both decided to take a chance and set the perimeters to anywhere in the world. We were married shortly thereafter in France and now live in CDMX. I recommend this app for anyone who wants to get back into dating or is looking to date seriously. As others have advised, always meet in a public place and be safe! I never had the misfortune of meeting a sketchy person, but I know others have.
By ruizbabin

Much worse than it used to be.

I loved this app for a while. Recently, I have struggled to get matches despite keeping everything roughly the same in my profile. I can tell that my profile is not being shown to people because the number of people who like me is constant. This also means that I’m not being shown people who swiped up on me. Not happy with the current algorithm.
By David Tolk Piano

If you’re looking for a NCMO this is the app for you. Everyone I know who has used the app usually makes out with someone and never hears from them again. Pretty low. If you do happen to match with someone you probably will be ghosted. This app is basically window shopping for someone you’ll probably never meet. My advice? Get out there with friends and date your friends, date people you know and trust. Don’t waste your time with a discount tinder app. This is just my opinion so take it for what you will. The app itself is buggy, it rarely notifies me when all notifications are on. Messages don’t always send, and there is no way of knowing if it was sent. Usually I don’t get notified when I match or get a message. Also sometimes I get guy profiles in my feed which is weird cause Its random. I’ll have 5 girls and then a random dude... weird. So what’s the point? Not a great app. I appreciate the idea but seriously just go ask out a girl you like, put on your big boy pants and just do it. Girls, if you like a guy but he hasn’t made a move, make a move! Guys are dumb and don’t pick up on hints easily so just go for it! It’s 2019 dating doesn’t have to be one sided. Plus I wouldn’t want to tell my parents I met my spouse on a dating app.. not very romantic lol Also girls, if you do decide to use this app be cautious. The college I attend which will remain nameless has sent out many emails warning about the dangers of using this and other dating apps because the type of guys that use them often take advantage of girls. Lastly I married my coworker, we did not meet on mutual, it can be done! Good luck
By Bagpipe player

I logged put of this app to take a break but when I went to log back in the app just loops me through identification. I haven’t been able to log back in and I have reinstalled this many times. Very annoyed at this.
By YesThisIsDustin

If you don’t pay for the ridiculous subscription cost they will hide things from you. For instance the “people who liked me” is always empty, even though you can’t unlike someone. As soon as I pay the list shows up. The chances of matching with anyone on here is close to zero, and the chances of them responding is even lower.
By Ghtyiyxc

Premium is all well and nice because you’re able to see who likes you and get more matches but the statement by mutual that your profile is boosted is false advertising. This is the third or fourth time I’ve paid $8 for a week of premium and this is a recurring issue. Normally, I’ll usually get 3-4 likes a day without premium, however, when you “upgrade” you’ll get next to zero likes. I have no problem getting weekly dates off of mutual when my account is normal. Even when I have my distance filters set to worldwide I’ll maybe get 1 like a day. Which is significantly less than the 15-20 likes per day with the same settings without premium. Maybe it has to do with mutual’s algorithm but I sincerely doubt they boost your profile when you pay them to. I feel bad for the people that have wasted money paying for 1 month or even 6 months because they’d have to wait that duration out until their account returns to normal and they start getting likes again. Or perhaps they just delete their account and eat that cost.
By Rwmcguire

Best decision of my life!

I met my husband through this app! He was living in France and I in Provo at the time, it was through mutual premium that he was able to swipe up on me. I would definitely give this app a try! It allows you to meet people all over the world that share the same beliefs and values. So grateful for mutual!!
By Alyssa Hoareau

Do they just want my money?

I’ve been using this app on and off for about 4 years now, and the quality of my dates ranged from “maybe we’ll click” to literally a child molester who was arrested 2 weeks later. (Note: I am not blaming mutual for any of my dates’ actions, but I thought it was worth reminding people to be careful with online dating. Even church members can be predators.) The free version of the app is lackluster, buggy, and constantly pestering you to pay for the upgrade. It’s annoying to use. I haven’t bought the paid version, and I doubt I ever will. I don’t have much faith in the company to actually follow through and make a good product. I’ve also read other reviews stating that the paid version has its own issues. I’ve seen other reviews saying they don’t get replies/messages from their matches, but part of me wonders if that’s an app problem or just a product of all dating apps (from my experience, the percentage of matches that lead to actual conversations are low no matter the app). That said, I would also believe that the app is suppressing messages and/or matches themselves. Some suggestions: - make some more filters available for the free version, such as height - fix the algorithm - stop begging me to buy the paid version. I won’t do it
By pure irritation