BlazeTV is the best source for the most thought-provoking personalities and conservative ideas free from censorship by the coastal elites. BlazeTV breaks free from the leftist censors and empowers content creators to be who they are, without filters. BlazeTV has the content you want, on-demand, when you want it. Download BlazeTV to watch the best in pro-America, pro-free speech content from conservative personalities you know and love. There are no PC advertisers controlling the content, no digital mobs calling the shots, and no big tech censors muzzling the message. Free speech is under attack. Get the uncensored TRUTH. The BlazeTV app plugs you into on-demand video from the best talent in conservative media. Tune in to Blaze Live to stream broadcasts from your favorite BlazeTV hosts. Watch Mark Levin, Glenn Beck, Steven Crowder, Phil Robertson, and many more whenever you want, however you want. Don't miss these exclusive BlazeTV shows: - Louder with Crowder: Late night is finally funny again. BlazeTV is the only place to watch Steven Crowder uncensored and on demand. Every Crowder video banned by YouTube is available just for BlazeTV subscribers. Hold onto your butt (or laugh it off)! - LevinTV: America's nightly town hall meeting with the Great One, Mark Levin. Levin's program leaps from radio to TV with in-depth episodes exploring the U.S. Constitution, explaining the meaning of liberty, and fighting progressive tyranny. - Glenn TV: The Truth lives here. Glenn Beck breaks out the chalkboard to connect the dots on concealed corruption and expose anti-American agendas, while calling for the defense of the Constitution, individual liberties, and free markets. - In the Woods with Phil: Duck Dynasty star Phil Robertson is back. Progressive TV executives wouldn't let him speak his mind, so now he's coming straight to you from the woods with 70 years of unfiltered wisdom and uncensored biblical common sense. - The Steve Deace Show: Fear God, tell the truth, and make money. Steve Deace is here to deliver principled conservatism with a snarky twist served up daily. There's just one rule: No B.S. To access all premium content, you can subscribe to BlazeTV on a monthly or annual basis with an auto-renewing subscription right inside the app. * Pricing can vary by region and will be confirmed before purchase in the app. In app subscriptions will automatically renew at the end of their cycle. All payments will be paid through your iTunes account and may be managed under Account Settings after the initial payment. Subscription payments will automatically renew unless deactivated at least 24 hours before the end of the current cycle. Your account will be charged for renewal at least 24 hours prior to the end of the current cycle. Any unused portion of your free trial will be forfeited upon payment. Cancellations are incurred by disabling auto-renewal. Terms of Service: https://www.blazetv.com/pages/terms-of-use/a/terms-of-service Privacy Policy: https://www.blazetv.com/pages/privacy-policy/a/privacy-policy 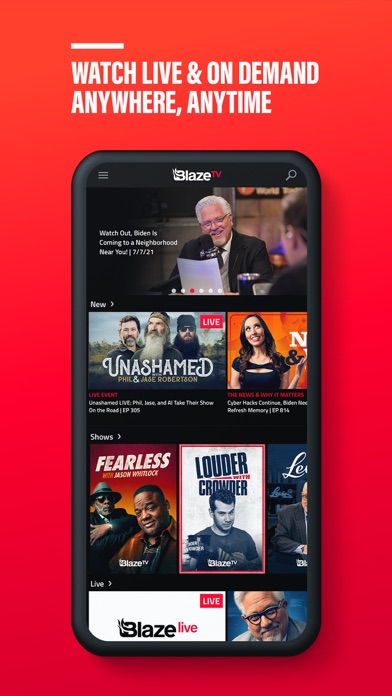 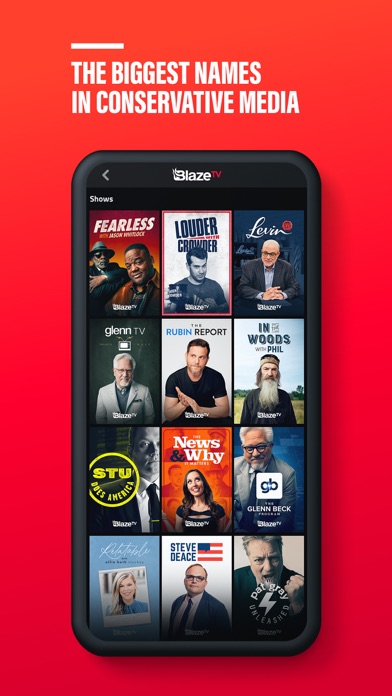 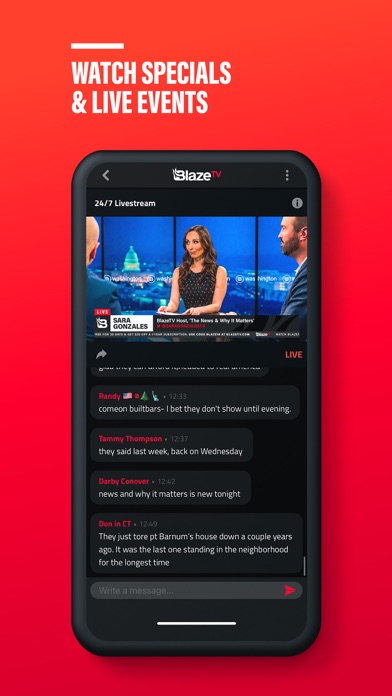 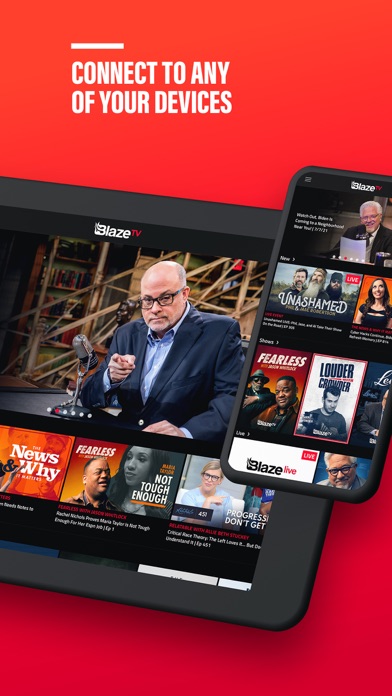 Our go to for conservative news and Television

We had heard about Blaze T.V. through a relative while we were locked down in the amazing year of 2020. We needed a safe place for news and opinions that wasn’t trying to push a narrative. In comes Blaze T.V.! Blaze T.V., became our go to for conservative news and Television. Some of our favorites are Louder with Crowder, Jason Whitlock, and The news and why it matters with the amazing Sara Gonzales. There is such a wide variety for everyone. You can’t go wrong. Take my word for it! Enjoy!
By Flipfink35

Glenn, Mark Levin, you are awesome! Since Rush passed away (God Rest ) You are more important now. We need more lovers of the constitution and bill of rights and critical thinking and common sense. 2+2=4 lol… I’m a very satisfied paying customer and your content is worth every penny! I support Fox, The Daily Wire, and The Blaze TV. It’s so important that we have freedom of speech and people have more options available to them and keep discussions going so we can create more understanding and unity in our great country. Thank you for doing what you do!
By Raychil73

BlazeTV is a wonderful platform!
By jvnorto

The content is the best you’ll find on the internet but I can’t stand the app. Please add the ability to pause a live show and adjust play speed on live and previous episodes. With that I will change my review to a perfect 5 stars and will never use the communist stream platform Youtube again
By Tocci92

This might be the worst app I have ever used. If it were not for louder with Crowder, I would not pay for this garbage.
By Jaksnankaka

Everything was working great before the most recent update. I listen every day in my shop. I stream from my phone to the tv. If I touch my phone while listening the video starts over and I have to fool around with it for a while to figure out where I was in the video to continue watching. I listen to Glenn’s daily show and Pat Gray every day and get interrupted from time to time with calls or visitors and can’t pause the video because it automatically starts over. This is a 10 star app but the update ruined it. Please please please fix it soon. Thank you for your help. Here’s an update. I emailed the support team and received a response within 24 hours. Amazing help. They asked me to delete the app and shut down my phone then reinstall the app. At this point it appears to have fixed the issue. Please support BlazeTV as they support us. Many thanks to the support team and the entire BlazeTV cast and crew. You guys rock.
By Retired USMC Gunny

ThankyouthankyouTHANKYOU for *finally* adding a skip-forward button! Now it finally works well on my iPad mini, and I don’t need to try to scrub forward without accidentally swiping over to another app. Yay! I love The Blaze, so this tiny change makes me very happy. The app is otherwise excellent; this pushed it into 5-star territory. <3 PS - I agree with the other reviewer that asked for offline viewing! PPS - I spoke too soon. Pausing the video with AirPods works as expected, but resuming does not. Even when sitting directly in front of my iPad with a Blaze video paused on the screen, it resumes playing music (which I had not been playing) instead of resuming the BlazeTV video. A bug, I presume? It worked fine before the update.
By LittlePixels

I watches louder with crowder mostly but after 50 mins play it reverses and restart show, usually I listen and even when I watch I can only reverse now fast forward and no small screen if I don’t want to stop show to find another show. 11/22/2022 Update: thanks earlier issue were fixed but new issue started, phone getting super hot, 5mins screen use and 1h 51 off screen listening took 22% battery. For comparison YouTube 1h 51m on screen and 7m off screen only took 16% battery, something is not working efficiently with blaze Tv app. I will update to 5 stars once those issues fixed. Great job on new player and comment area on previous fixes. Thank you.
By HEERA DHILLON

Blaze has the most stacked roster of any right of center media company ever conceived. The most recent app update has everything looking great but couple of issues. It has been slaughtering my battery and it also will not sync with my Apple now playing feature. I try to listen to the shows will I’m working so when I pause the show I has unlock my phone to resume playback. I couldn’t find an app support so hopefully dropping it in my review y’all can help out.
By Speckthename

Had this service for a number of months but found most of inform/ news was available on other services much of it free. Cancelled on iPhone in March but continued to charge me until November with no refund of course.
By Problem with latest iPhone