Hudway Go is a simple GPS navigation app for drivers. It keeps it very intuitive and non-distracting, displaying just the outline of the road you’re driving and your next manoeuvre. *** "Hudway is one of the cleverest driving apps we've seen" — CNET "Hudway app is unbelievably cool for one special reason: It actually lets you see your directions and route right on your windshield" — USA Today "Hudway HUD tool will remind you nothing less than a science fiction movie that you watched recently" — crazyengineers.com "HUDWAY turns your windshield into a jet fighter cockpit" — digitaltrends.com *** HUDWAY Go helps you drive safer in fog, rain, heavy snow, in dusk and darkness. Create a route and place your smartphone on the dashboard — you’ll see the route reflected on your windshield. Keep your eyes on the road and know in advance what’s ahead — a straight run, or a ramp-turn. This is especially handy when driving between cities. Features: - Intuitive 3D map, simple navigation - Voice Assistance - Speed limits - Long tap on the map to set the destination - Fuel consumption calculation - Transit points - Search for addresses and POI - Choose alternative routes - Drive offline right after you start - The app will recalculate the route if you leave it - Classic GPS map navigation mode - Head-up display (HUD) mode - Trip info: ETA, speed, distance traveled, directions on the next manoeuvre, and more - Based on OpenStreetMap (OSM) Note: If you face any problems or find any bugs, please email us at support@hudwayapp.com or report the bug right from the app. We appreciate your feedback! Attention! 1. On a clear day, the device screen brightness is typically insufficient to give a decent reflection for HUD mode. In that situation, you can use the app in standard mode with the phone fixed with some mount, OR stay HUD using our HUDWAY Glass accessory (learn more about it at hudwayglass.com). At night, in dusk, or in dull weather the reflection is normally well-discernible. 2. When driving, make sure that your smartphone or tablet is well fixed in some mount or on some sticky pad, and doesn't prevent you from clearly seeing the road. Continued use of GPS running in the background can dramatically decrease battery life. Note about the auto-renewing premium subscription: — The auto-renewing subscription is available on yearly basis for USD $2.99 — Payment will be charged to iTunes Account at confirmation of purchase — Subscription automatically renews unless auto-renew is turned off at least 24-hours before the end of the current period — Account will be charged for renewal within 24-hours prior to the end of the current period, and identify the cost of the renewal — Subscriptions may be managed by the user and auto-renewal may be turned off by going to the user's Account Settings after purchase — No cancellation of the current subscription is allowed during active subscription period — Any unused portion of a free trial period, if offered, will be forfeited when the user purchases a subscription to that publication. If you want to use HUD during a day-time — there is a special accessory HUDWAY Glass: http://hudwayglass.com Privacy Policy http://hudwayapp.com/privacy Terms of Use http://hudwayapp.com/en/terms/ 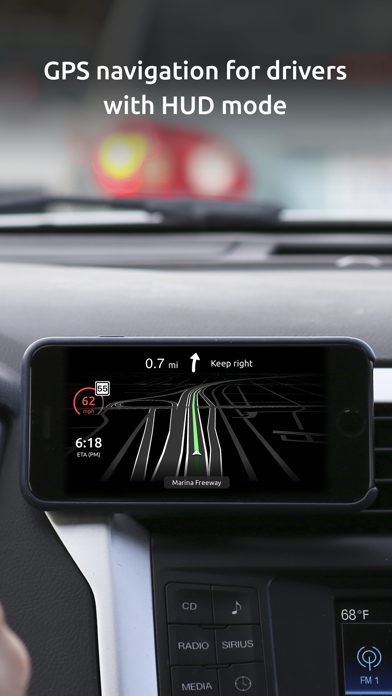 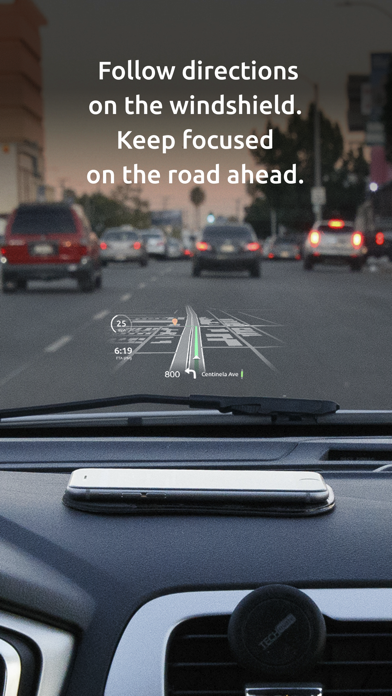 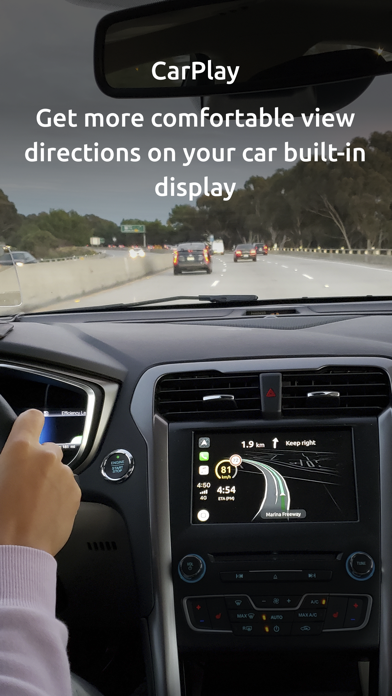 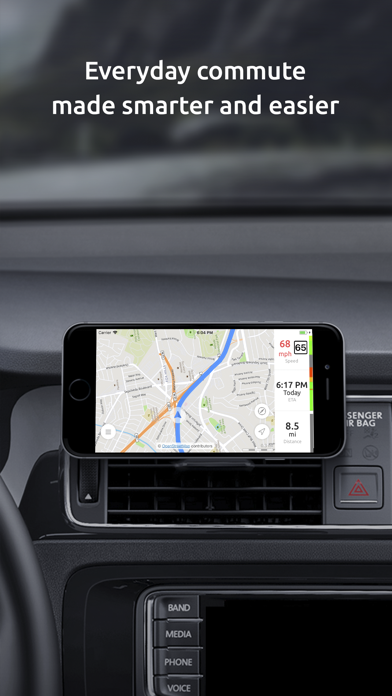 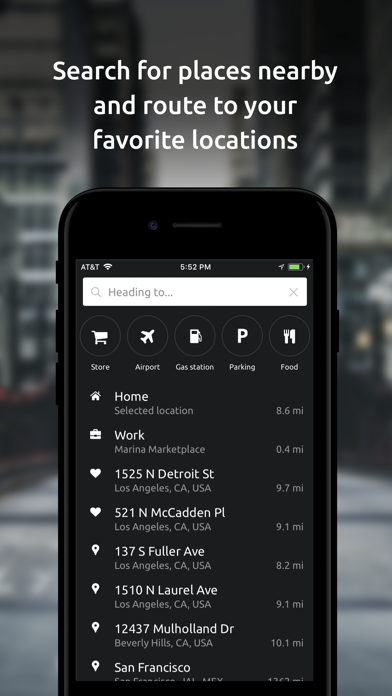 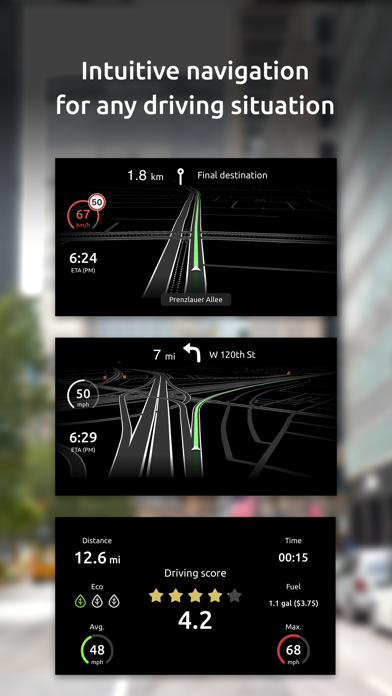 I’ve got an iPhone 6s running 13.4.1 and I can’t get the app to load any topography. I plot a route and start the route and it just sits there saying it’s loading buildings. It never actually finishes loading to start the route. Too bad, I had great hopes for this app.
By Person82539056

I would like to know how to change the language, beside that I love it
By Sotilrac

Can’t find cancel option for my subscription. Subscription notice misleading and doesn’t show name of app, only “premium subscription” . Only options are renewals. This is misleading and confusing, especially since the app is only present on my phone. Have had app a year and seldom use.
By Drbillz

Does not display to windshield.

I’ve been trying for 2 days to get this app to display to my windshield. I’ve tried every setting on my phone, and in app. Also tried the other Hudway apps and still nothing. Great Idea. If it worked.
By CLewis18

After address input it takes forever to download the navigation.
By xpd3rd

Hudway app is preprinted on VIZR product material. One doesn’t work without the other. VIZR is a scam, and the app doesn’t work properly. The relationship with these companies is apparent. Very poor application. He development team was too eager to release the product before working out the bugs. The navigation app is poor. I live in Atlanta and it can’t map accurately in a timely manner. Have contacted VIZR support and getting nothing but push back. I want to return these products because looking at waze in reverse isn’t a solution! I know my speed so that is of zero value. YOUR Mapping app is slow, inaccurate or unresponsive. Your business partner VIZR is unprofessional and should also be avoided
By Scomet

Cannot get a refund for the lifetime version

BUYER BEWARE! To avoid all the adds, I purchased the lifetime version of this app about a week ago. The Vizr heads up display which this app was made for was terrible and was promptly returned. In testing this app, the gps is equally as terrible. I tried to get a refund and was denied!
By chr1spycreme

The worst routing imagineable. Who designed the algorithms for this rubbish? A 6 hour journey takes 8 hours on this app. Pfui!
By Zoomzoomer

The loading time is terrible...it takes forever to load the route, while all other 5 to 6 GPS maps I tried can get this done immediately. My device IOS is 12.4.4. To test it, I create a route that is 2 miles away from my home, then hit the button Let's go!, it goes nowhere but keeps showing some rotating dots for good. I can finish two cups of coffee and it still working hard to load the navigation route! Once in awhile, it could load the route in 10 to 20 seconds, it is still ten folds of time more than other maps I have tried.
By Ted in Chicago

Would pay for this if it just reflected google maps

HUDWAY Drive: HUD for any car