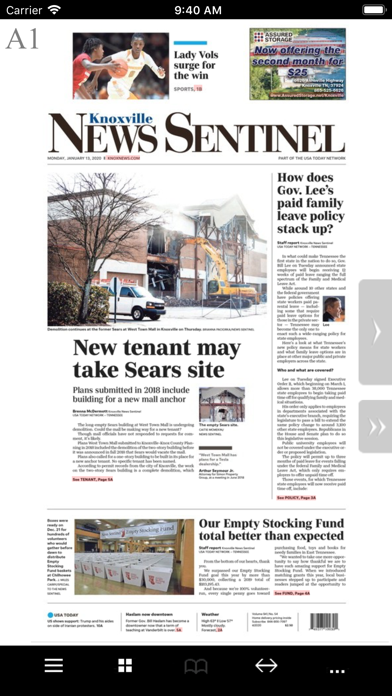 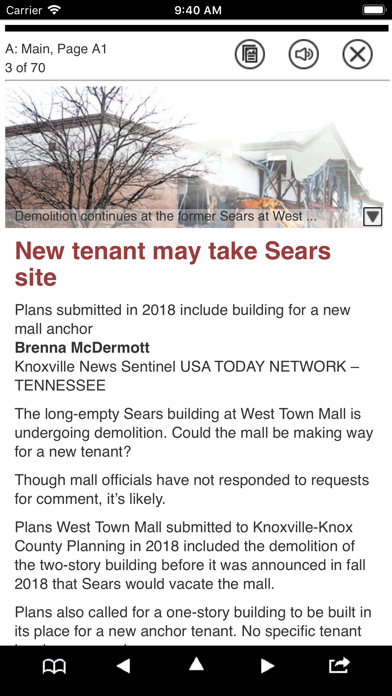 Obviously, your server is woefully inadequate. Takes the app 15-20 minutes to remove blur that prevents the paper from being read. Have a high-speed internet connection and ALL other apps work fine. Charging $8/mo. For a paper you can’t read???? Give me a break. Update a few days ago had no effect on this LOUSEY app. Too bad ou can’t give it 0 stars. FIX IT.
By mjsknoxville

Sadly, the News Sentinel is the poster boy for the decline of print media. Revenues obviously keep declining which leads to the decline of quality in the paper itself. Coverage is lousy and copy editing non-existent. The print edition itself is certainly not worth the price of a subscription, and this app makes things worse because it just doesn’t work much of the time. Soon there will be no News Sentinel period.
By JohnP4419

This thing hardly ever works, and now it doesn’t work at all; “...no internet connection.” I’d give it a zero rating if I could. People are paying for this: FIX IT!!! It’s no wonder you people run in the red every year.
By totally-fed-up

When it works, it’s pretty good. The problem is, it often doesn’t work, or works poorly. The last two days, it decided I don’t have an internet connection, even though all of my other internet-using apps are working fine. It forgets who I am regularly, making me re-enter my password. It freezes often when trying to save articles. First they jacked the price of the physical paper up, making the digital version of the paper the only option for many. I’d like to support local news, and also receive it without so many hassles. They’re not making it easy to do.
By Mason Jarr Junior

This app gets worse. Started with forgetting password and having to log in, even after reading the current day’s paper. Now, it claims no internet connection while the tablet is connected to the home WiFi. Also freezes up on regular basis. Have to exit completely. Needs an update x it’s been over a year!
By Knox Citizen

It more and more seems Gannett wants to kill this paper. The app hardly ever works. When it does, it’s good. It freezes, or says there’s no internet connection when there is, and on and on.
By RetiredReverend

Don’t waste your time or money. It freezes all the time and you have to close and reopen it. Some days it just won’t connect and says no internet connection when all my other internet apps are working.
By Vol Scott

Would be good app if it worked

I had to downgrade from a 2-star to a 1-star. It used to be I could get it to work by deleting the app and installing it again. No more. Total freeze out. It’s the only app I have that won’t work so I know it isnt the device. It’s Gannet.
By dgc_nickname

The last update about a year ago promised better stability and bug fixes. Have seen neither. The app continues to freeze requiring closing and restarting. Also continues to forget my password. Last update a year ago? Given the number of 1 star complaint reviews since the last update, it looks like KnoxNews has gone home. No more support. We don’t care.
By etteteytrtwueyyetgaeegtetegegw

The most frustrating app ever!

Love the app when it works. I’d give it a 5 star. Problem is it ALWAYS freezes. Closing the app seldom helps. Reinstalling the app usually fixes the issue for a while. This week, I’ve reinstalled the app 4 days in a row. For this I give it zero stars. Support is nonexistent. Another zero star. I should just drop the paper altogether.
By Im4vols