Willy Wonka Slots is your lucky ticket to FREE casino slot machines with the iconic cast and characters of the classic movie! Join Charlie as he visits Willy Wonka’s chocolate factory and takes the tour of the most eccentric and wonderful candy factory of all. Satisfy your sweet tooth with Free Spins and mouthwatering bonus games as you explore the most flavorful factory of all time! VEGAS CASINO SLOTS MEET THE MUSICAL FANTASY FILM • Follow your favorite characters as they tour Wonka’s fantasy factory • Unlock new levels and discover delicious surprises! • Explore the chocolate factory on a thrilling tour with sounds from the classic movie • Create your very own garden of crazy Wonka creations in Sweet Candy Crops • Carefully choose which scrumptious crops will go into your customized garden • Choose the perfect moment to harvest your Sweet Candy Crop and get your credits! • Earn DELECTABLE Free Spins • Score JACKPOTS with sweet payouts • Dozens of BONUSES and ways to WIN BIG absolutely FREE • Wonka Wins, Wonkavator Wins and plenty more bonus chances to win • Collect millions of free credits every day • Daily Bonus, Streak Bonus and VIP Bonus add up to tons of FREE COINS • Level up to unlock NEW LEVELS and raise your max bet • Explore new worlds and meet classic Willy Wonka characters – New levels coming soon! • Turn on Fast Play to speed up the action • Play the game online or offline Use Facebook Connect to: • Send and receive gifts with your friends • View friends’ progress with Facebook Connect • Sync your adventure across all devices Download Willy Wonka Slots for the sweetest slot machines around! Don’t wait - Your fantasy win is waiting! FROM THE MAKERS OF WIZARD OF OZ SLOTS Additional information: · This slot machine game is intended for an adult audience and does not offer real money gambling or an opportunity to win real money or prizes. Practice or success at social gaming does not imply future success at real money gambling. · The game is free to play; however, in-app purchases are available for additional content and in-game currency. · Use of this application is governed by Zynga’s Terms of Service, found at www.zynga.com/legal/terms-of-service. · For information about how Zynga uses personal data, please read our privacy policy at www.zynga.com/privacy/policy. WILLY WONKA AND THE CHOCOLATE FACTORY and all related characters and elements © & ™ Warner Bros. Entertainment Inc. (s17) 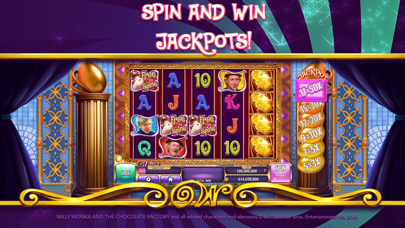 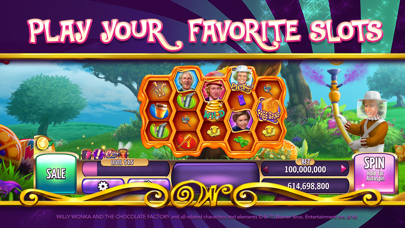 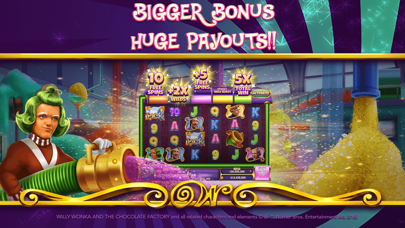 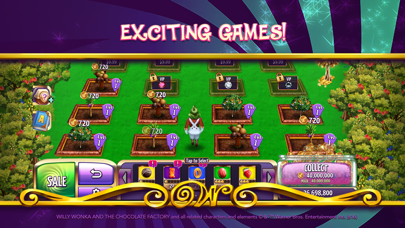 I can’t access my email rewards since last update. Emails go to facebook where I must login again, then nothing happens.
By Cattan88

Lvl 1013 and I can honestly say that the game is not even close to random. Free spins are now paying out amounts UNDER initial bets. “Random” pick bonus games ALWAYS choose the smallest amounts. Pick a side event? Always on the losing side. Bonus wheel? It’s a joke, I spend the entire event consistently betting over 100 million and get an end of event “average” bet spin with 10-20 million. In the last couple of weeks it has gotten considerably worse. I have spent hundreds of billions of coins and won absolutely nothing. No exaggeration, it’s get daily coins and lose them in 10 minutes. Buy coins and lose them within 20 minutes. Run far away from this cash grab. **Update** I am now convinced that the people running this game have direct control of odds and payouts. Since writing this review I haven’t won anything. No joke, I have not won anything in days. I downloaded and played the same slots on another device with another account and won like normal. It really is unbelievable.
By fyverbysea

Love Willy Wonka. Played lots of slots. None come close to this. 🤪
By MSgtyo

Ruin of what could be a great game

I have been playing this game since it came out. The biggest problem with this game, you will never get ahead. I have to wait months to get enough coins just to spin 2-3 times. The payouts are small, the hourly bonus is a joke. Even buying coins won’t work. This game is an endless money pit!! Don’t spend a penny getting coins! Hey developers, what’s so wrong with people enjoying your game?? Why not try and let people have a chance to play????
By Harringer55

Great game, fun to share gifts with family and friends
By Tbutcher8

Best way for me to kill time and enjoy the song from my childhood.
By AngieCee

I play this often but Never seem to win! Wish the payouts were bigger!! LOL
By Southern Sweetie2

WILLIE WONKA AND THE CHOCOLATE FACTORY

I LOOOOOOVE THIS GAME. This Game is Fabulous.
By MIZ TAZZ