Keep your digital wallets and keychains safe with Antivirus One, your personal cyber security expert. Antivirus One offers live antivirus monitoring to protect your Mac from adware, ransomware, spyware and all kinds of malware attacks. Download now and say goodbye to pop-up scams, spyware and viruses! Developed exclusively by the world’s largest antivirus and spyware active monitoring lab at Trend Micro. Secure your Mac with these powerful Antivirus One protection features: 1. Real Time Detection Live malware detector on the go. Protect your Mac against all threats 24/7. 2. Virus Scanner Quick scan, deep scan or customize scan locations to safeguard every part of your disk. 3. Virus Cleaner (In-App Purchase required) Automatically remove viruses completely for the security of your system and privacy. 4. Adware Cleaner Get rid of pop-ups, adware, and browser hijackers so you can browse at peace. 5. Privacy Cleaner Customize your online transparency. Turn invisible without leaving a trace in your browser. 6. Safe Search Flag safety ratings of every Google search result. 7. Web Threat Protection Prevents users from visiting phishing websites. We highly recommend full disk scanning using Antivirus One on a regular basis to keep your Mac safe from security threats. We offer two auto-renewing subscription options: — Monthly: as low as $1.99 — Yearly: as low as $19.99 Price may vary by location. Subscriptions will auto-renew unless canceled. — Payment will be charged to iTunes Account at confirmation of purchase — Subscription may be managed by the user and auto-renewal may be turned off by going to the user’s Account Setting after purchase. — No cancellation of the current subscription is allowed during active subscription period. — Subscription automatically renews unless auto-renew is turned off at least 24-hours before the end of the current period. — Your account will be charged for renewal for the amount of your current subscription within 24-hours prior to the end of the current period. All cost for subscriptions are mentioned above. We value your feedback, it helps us to improve Antivirus One to better serve you! Please send us your comments or suggestions in the App Store or by the feedback page inside Antivirus One. Privacy Policy and Terms of Use http://gr.trendmicro.com/GREntry/NonPayment?Target=AntivirusOne&OS=&SP=&PID=DS10&FunID=PrivacyPolicy&VID=&Locale=EN-US http://gr.trendmicro.com/GREntry/NonPayment?Target=AntivirusOne&OS=&SP=&PID=DS10&FunID=LicenseAgreement&VID=&Locale=EN-US Contact support: mac_support@trendmicro.com Please be advised that this app is only offered in English in this country. 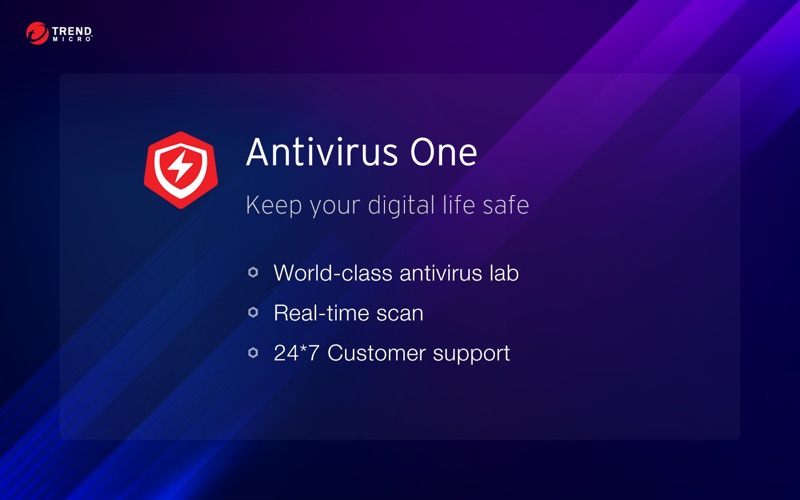 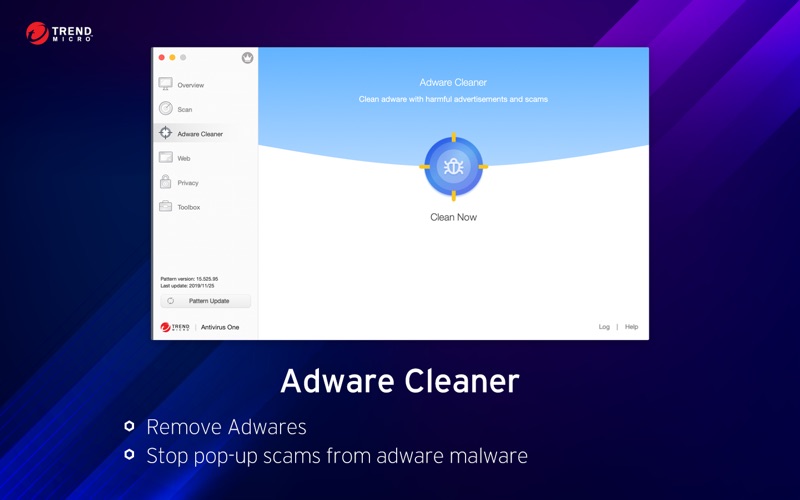 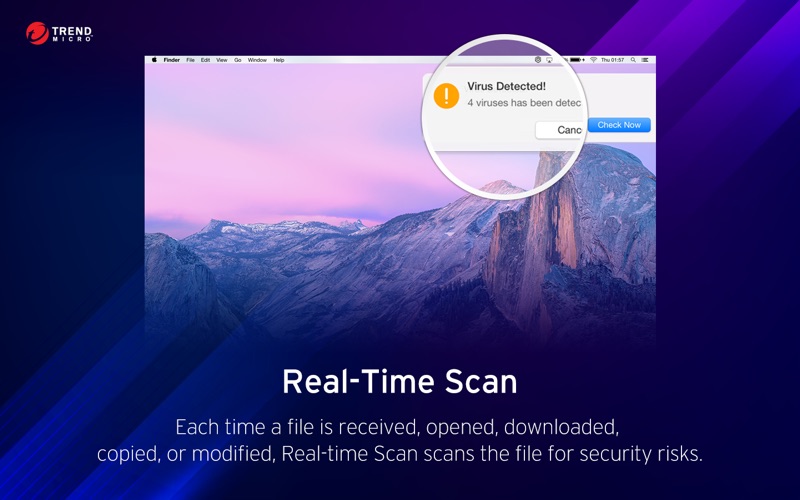 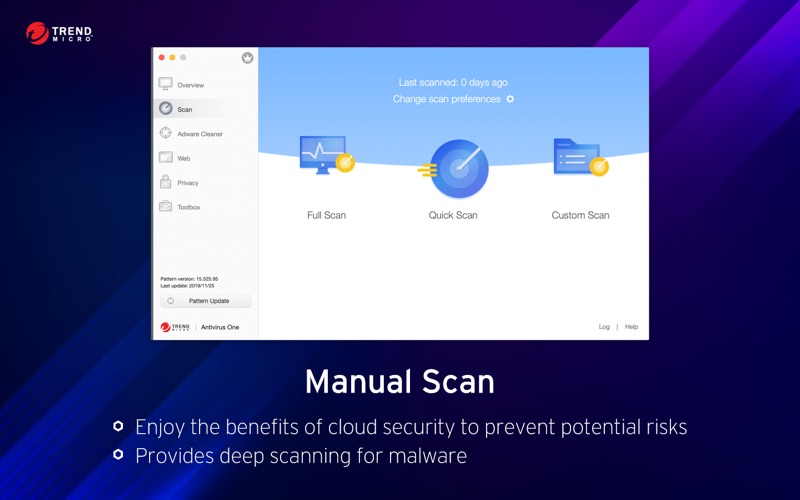 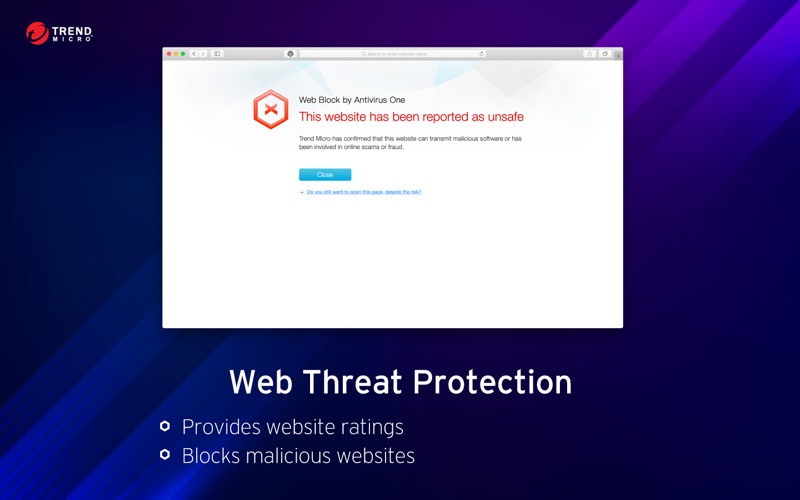 I accidently downloaded this app on my macbook air and I’m trying to uninstall it and I’m having a hard time doing so because I’m new to all of this and it says that i can’t send it to the trash because some extensions are still in place. So how do I take off all of the extensions? Please I need help
By MJJJJJJJJJJJH

With the epidemic going on, and all my classes being moved to online conferences, the worst thing that could happen, would be my computer acting up. And it did. I couldn't attend or access any of the material or classes and no matter what I deleted and removed, I couldn't find the issue. I gave up and downloaded Antivirus One and even payed for the subscription and it worked. I was finally able to actually complete my work and my computer is no longer acting strange and redircting me to random sites! It actually works!
By AlexaCal

Antivirus one for MacBook Air

Easy to instal and use
By DRLydem

Stopped my super annoying bing search engine redirect!! Only complaint is it won't enable web protection when I select it.
By hbaloney

This is such!- a wonderful app it has cleared me of * (AND YES I MEAN 8) viruses and 2!!! adwares were banished! Ever since I used antivirus one my mac was insred and I knew I had gret protection on my side. Even after that NO viruses yes NO viruses! I totally reccomend this compared to other apps which I have tried using to save my computer. NONE work as well or efficiently as Antivirus One. Dont listen to the 4.5 rating it should be a 5/5. Thankyou Antivirus One for saving my computer!
By Bootiecheeks101

It has done a good job so far, but I've had it for a short amount of time. You have to buy the cleaner, but the scans are free. It's only $20/year, and seems to be worth it so far.
By Kirecher

they made me suscribe and the app DOESNT WORK
By Maj627

Did not remove malware

Bought this to remove Safe Finder. Paid the $2 subscription, but it didn’t work. Safe finder still happily ensconsed in my mac, browsers running like they’re in molasses, being redirected constantly.
By cep38

I downloaded Antiirus-One and paid for the subscription to clean my mac because I was having a lot of trouble with a browser hijacker. The cleaner did find a couple suspicious things and removed them, but the hijacker was still present. I had been scouring the internet trying to figure out how to fix this and was disheartened that it was still happening. So I used the Antivirus One software to send a message to their support team. I’m pretty sure it was a matter of hours, not day, that I got an email in return laying out very simply what is probably causing the problem and how to fix it. From there it took me 30 seconds and my Mac was fixed!!! All the other softwares that I could find were promising to fix my issue for way, WAY more money. Antivirus One was super low cost and the support team responded immediately with how to fix my problem. Amazing service! If I have issues ever again, I’ll definitely be reusing them.
By Jrad77