Best Bass Booster and equalizer App for your iPhone- The Boom App redefines the way you listen to music with Bass booster, a customizable 16-band equalizer & handcrafted presets. You can also experience the magic of 3D surround sound and feel your tunes come to life on any headphones. Boomin’ Features: - 3D Surround Sound: Patent-pending technology, amazing audio on any headphones. - Bass Booster: Amp-up your music and feel every beat come to life - 29 Handcrafted EQ Presets: Dubstep, pop & many more presets. - 16-band Custom Equalizer: Craft your own Equalizer to enjoy your music in your way - Stream Spotify & TIDAL with Boom: Incredible listening experience from the leading streaming services. - Stream 40K Radio Stations and Podcast Worldwide: Improved audio output on your favorite stations - Multiple Library Access: Access phone music and music stored on Dropbox & Google Drive too! - Beautiful, User-Friendly Interface: Clean, minimal and easy to use interface - Enhances All Headphones: Get an amazing listening experience on any headphones Subscription Details: You can enjoy Boom for free with our 7-day trial version. Get unrestricted access to all features and experience the magic of vibrant audio output for free. • Your credit card will be charged through your iTunes Account after the purchase confirmation. • Automatic renewal unless auto-renew is turned off 24-hours before the end of the current period. • iTunes Account will be charged for renewal within 24-hours prior to the end of the current period. • You can manage your subscriptions and you may turn off the auto-renewal by going to the iTunes Account Settings after purchase. • No cancellation is allowed during an active subscription period. • Any unused portion of a free trial period will be forfeited when you purchase a subscription. Boomin’ reviews: “With a sleek and easy-to-use interface, Boom: Music Player with Magical Surround Sound lets you free your music of that compressed feel, breathing new life into every nuance of your favorite tracks — just the way the artists intended. This app boasts a range of features to deliver that edge, including a mind-blowing 3D Surround setting, equalizers and audio intensity effects designed to work with any headphones. Once you’ve heard your choicest tracks on Boom, there’ll be no going back.” – App Store Editor. Boom Privacy Policy and Terms of Service: https://www.globaldelight.com/boomformobile/ios/privacypolicy.php?lang=en *** If you have a Mac, do check out Boom 3D for incredible 3D Surround Sound on the Mac App Store at http://apple.co/1Vjj4XR ** 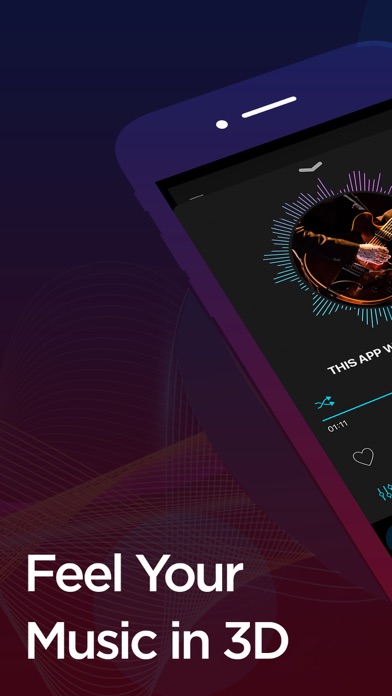 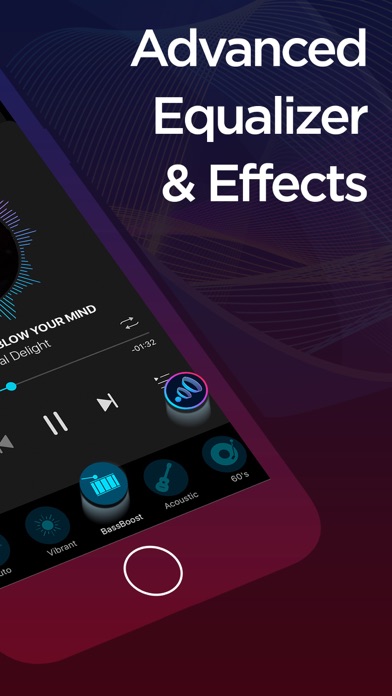 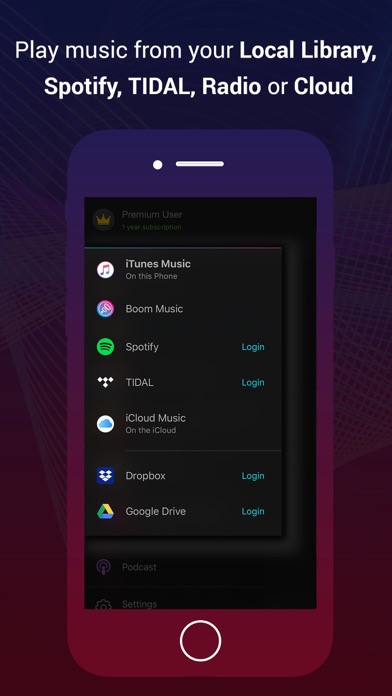 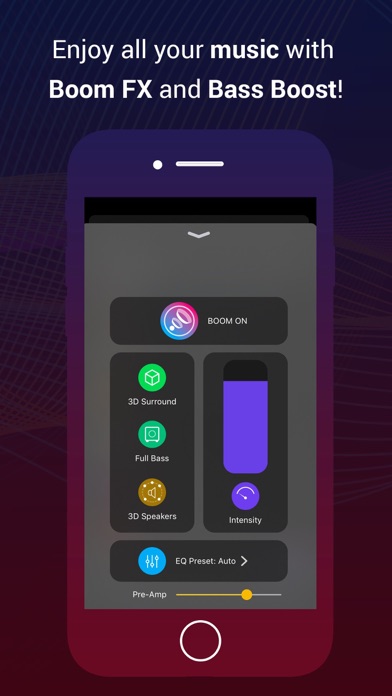 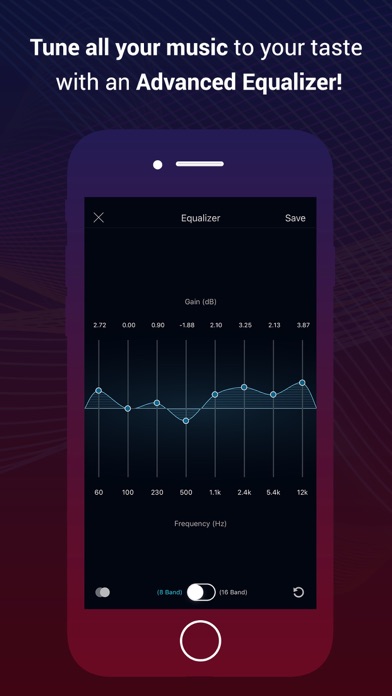 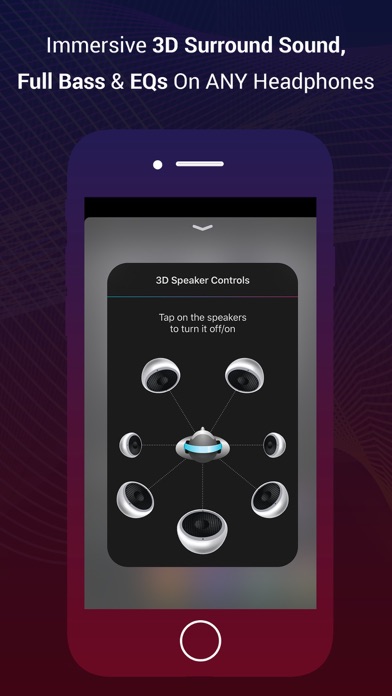 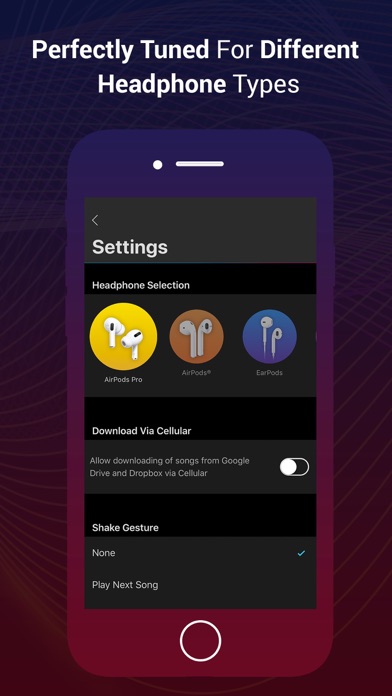 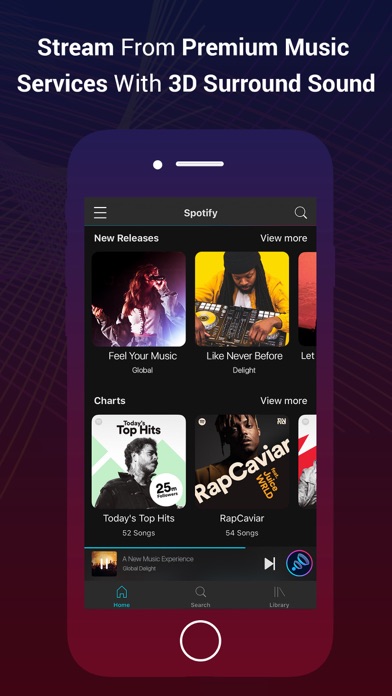 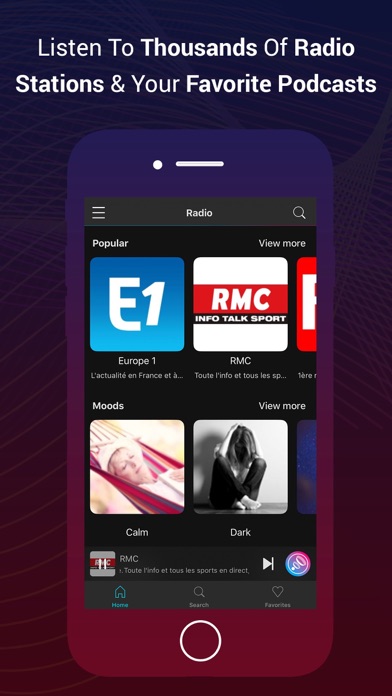 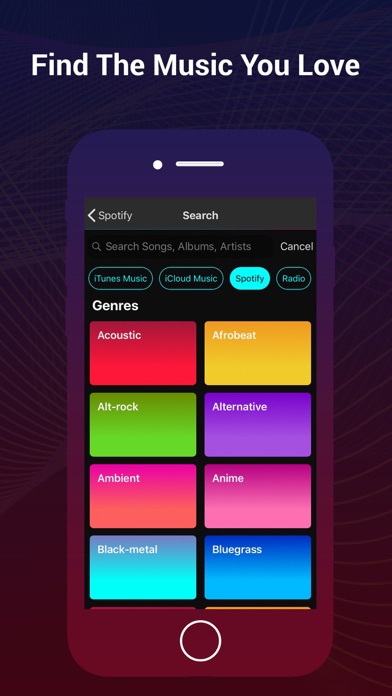 I’d like if you could add the feature to alter the speed and pitch of the track your listening to. Although besides that this app is cool.
By Dope Beatz 37

Kicked me out of my Spotify and they won’t return my email how to fix it. Garbage app.
By ririri123123

Like the sound. It’s not earth shattering better than other music players with EQ capability, but it gets a tiny bit more out of it when listening via Bluetooth earbuds (using mostly AirPods pro). The only issue I have is when selecting an artist, it then shows all the songs in random order instead of first showing an album view within which one can then see the songs. This is just so basic but quite annoying when you have a lot of music in the iPhone with a lot of artists and most of them with more than just 2 albums. Please fix this, it’s very basic
By wildeSG

Off line should work

This app is great,the only issue is that why is not working when you have no internet.cus not all the time I been in place with internet available.
By Klocon

You cannot use the different equalizer settings to play iTunes music with a typical monthly subscription: access to the music but have not purchased it. Music that you have purchased from the iTunes Store I believe is non-DRM and may be utilized with this app...Or so the developer implies.
By Jim Powder

This app is good if your looking to really jam out or of your hard of hearing. I have Spotify premium I had no trouble logging in and it works really well the 3D sound is on point I don’t know what it’s like to get adds on this because if my subscription but all in all I give it 5 star rating.
By M0NGRoL

Doesn’t improve sound quality. Muddied up music to make it more full at the expense of clarity. Doesn’t add anything to volume.
By 3putterman

Conected to my speaker and now it won’t work properly and sounds distorted. Tried deleting the app but it didn’t work. Do not get this app
By Kelson fennell

App is absolutely horrible. Does not let you pick your own music
By 2928krja

This app allows me to stream FLAC music from the cloud ,(which I was pleasantly surprised by) however the stream stutters and fails to play the track without multiple pauses. The only to fix this issue for me is to download the song. I have another app that don’t require me do so in order to play my music smoothly from my Drive, I.e. VOX Music Player. Unlike VOX, Boom allows for sophisticated 3D audio with all headsets as well as having a lower subscription price. If the devs could fix this streaming issue they would easily be just as good if not better than VOX. I’m a lifetime subscriber btw. Update: I logged back into the app and got a message claiming that I was trying to play an “unsupported” file type. I’ve never had this issue when streaming the songs directly through my Drive, VLC Media Player, or VOX music player. If it weren’t for the EQ I’d probably regret becoming a subscriber.
By MGdakid

Camera Plus: Frame The Moments