*** Featured by Apple, Lifehacker, Macworld and Cult of Mac! *** Forecast Bar offers hyper accurate, hyper local live weather and forecasts right at your fingertips and is highly customizable to fit your needs. With full support for Apples latest OS, Forecast Bar is the most powerful and last weather app you will ever need! == Highly Customizable == - Create a customized weather summary to use in the app and widget which can contain any combination of 20 data points with everything from wind speeds to location of the nearest storm! - A new multi-city widget lets you see weather at up to 5 locations at a time! (Premium only) - Choose between our dark or light theme, or let Forecast Bar choose for you based on ambient light or sunrise/sunset times - Easily choose between many options for icons and backgrounds. - Create your own background packs using the images found on your phone or tablet! (Premium only) - Fully customizable Widget, allowing you to create your perfect widget. You can customize the compact and expanded versions separately. == Stay Informed with Push Notifications == - Personalized daily weather report for any location, at any time you wish - Push notifications for severe weather alerts in the United States - If you use Apple Watch or Forecast Bar for Mac, you can forward precipitation notifications and also badge the app with the current temperature! == Weather at a glance, or in depth == - Quickly check the current conditions or forecast for 14 days at a glance, including a succinct summary available in over 40 languages - Tap on any day’s forecast to see an hour-by-hour breakdown - Tap again to see even more details like dew point, pressure, visibility, UV index and more - Save unlimited favorite locations (and even rename them) across the globe for easy access and we’ll figure out the right units to show the weather in for you - Choose between a compact and highly visual view for weather at up to 8 locations at a time (Premium and Weather Company data source only) - Utilize nearby Personal Weather Stations (PWS) for even more hyper-local weather accuracy - Animated weather radar in the United States, Europe and Australia, including future radar forecasts - Check weather conditions up to 70 years in the past or future with Time Machine == Apple Watch Support (requires watchOS5) == - Forecast Bar includes a beautiful and powerful Apple Watch App with 30+ customizable complications - Displays current conditions, 12 hour forecast, and 14 day forecast - With watchOS 6, Forecast Bar can stay up to date in your dock and watch face == First Class iPad Support == - Forecast Bar supports iPad multitasking in Slide Over and Split Screen == Ready for Apples latest iOS and newest iPhone == - An iMessage app is included so you can quickly check and share weather at all your favorite locations right from within Messages - 3D touch on our home screen icon to view current weather conditions and shortcuts to recent locations and search - Taptic engine feedback for supporting iPhones Your free download includes one week of premium weather updates. Afterwards, you will need to subscribe to continue making full use of Forecast Bar, or continue with limited functionality and ad-supported. Subscriptions will be charged to your iTunes account at confirmation of purchase. They will automatically renew at the end of your subscription period unless canceled at least 24 hours prior to the end of the current period. Your account will be charged for renewal within 24 hours prior to the end of the current period. You can manager your subscriptions or turn off auto-renewal at any time from your iTunes account settings. Cancellation of the current active subscription period is not allowed. You can read more about our privacy policy and terms of use here: http://forecastbar.com/privacy-policy-for-forecast-bar.pdf 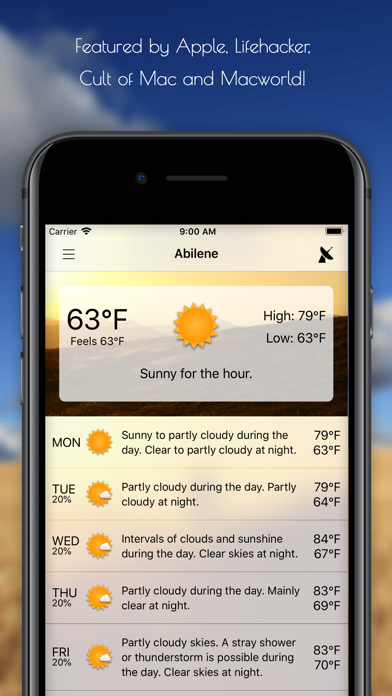 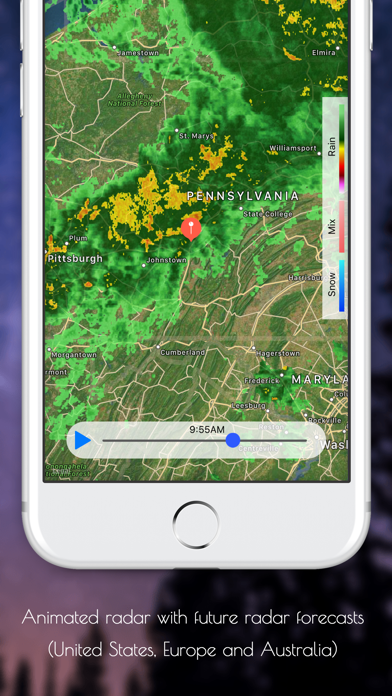 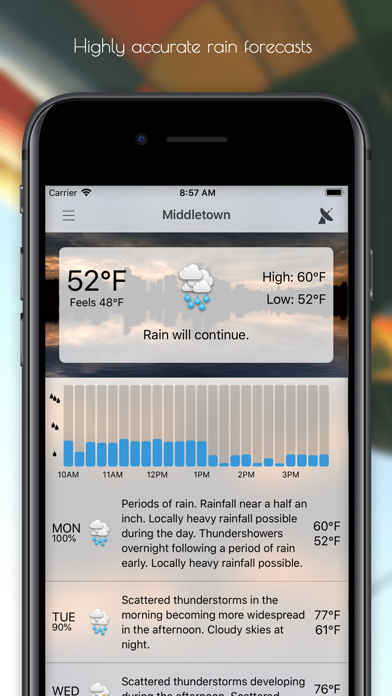 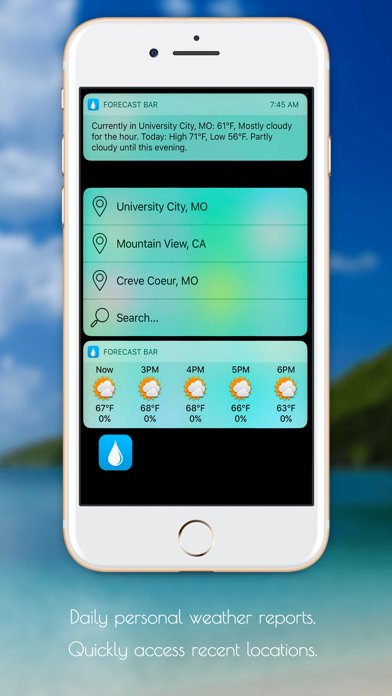 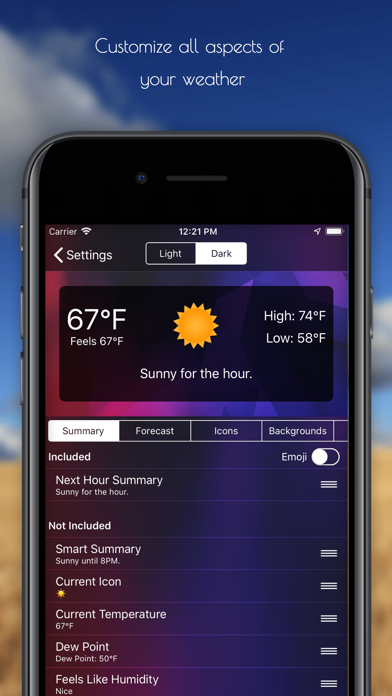 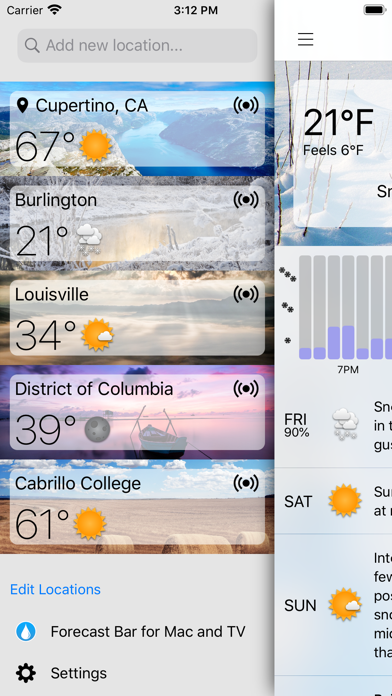 It's okay, update to add a star

Just because support replied and are genuinely interested. Updated it one star. Both weather providers weren't very accurate for my area. The map was unattractive and slow to load. The watch integration was very good. Went to a local TV Station App.
By T2nu

The watch complication has been stuck at displaying 77 degrees for days now which is incorrect. If I click on the complication, the app just says “loading” and never loads. Used to love this app but it is completely useless on the Apple Watch.
By Garnet6106

I’m considering subscribing but my Apple Watch is ALWAYS out of sync. I’m thinking maybe I need to have a paid subscription for that to work properly, but 1) that would be kind of ridiculous and 2) I don’t think it will help. Why doesn’t the watch app stay in sync?
By jmolson5

I have been using this app for a year, it’s a rare day when I can rely on the forecast
By Jdchtedgj

Great app that shows good information and is pretty accurate. My only issue is when using The Weather Company as a source the “push alerts” do not seem to come through. Fix this and it’s a 5 star app for sure.
By Stubbs6

Better than Wunderground *ever* was

Forecast bar is simple, easy, intuitive, and surprising in all the best ways! Thank you for making a solid weather app. Now that we've found you, Please don't sell out and ruin the experience for all of us.
By Tim Zaitsev

Would be great if...

...it reliably loaded. Widget, app, Watch app... All don't load after a while and have trouble with geolocation. I thought it might be problems with the Verizon network but it will do it on Wi-Fi too. If they can fix that, the app will be perfect. When it works, it's fantastic.
By SwainFlu

Paid subscriber. The watch face complication often shows the weather from hours or days ago which can get confusing. This can be sometimes remedied by opening the watch app but even that often only shows a loading icon. Opening the iOS app usually helps the watch app catch up but that defeats the purpose of the watch app. I sent this info to the developer weeks ago to which they told me the latest update takes care of this issue, though I had already installed that update. I followed their suggestions of changing the data source, deleting the app, restarting my devices, etc, which I did at least twice. The watch app is still not functioning on its own.
By Dallas Young

Weather App to Have

I have quite a few weather apps and all of them are in the four star rating. I keep checking for a better weather app all the time since they keeping better. Forecast Bar is the app to have I’ve been using the for several weeks now and love it. After using it for a week there was one thing missing I thought the app needed relating to UV index for the day. Love the app so much I wrote to the developer and suggested an app feature, well I’m bad the app already had it and I missed it. Even learned something new. By the way I got a speedy return on my question. Love it try it out. Lot of different customization to the app.
By geterry

This is a nicely done weather client. The issues with the radar have been corrected. Very comprehensive with the option to customize is pretty awesome. Nice work to the devs.
By Fahmi Abdallah