Today is your free personal habit tracker that helps you organize your day and build life-changing habits. Quit bad habits and stay on track with Today's unique visual and rewarding approach based on proven methods from behavioral science. What makes Today unique? SIMPLE & INTUITIVE Today's clean and simple interface is designed to help you track you multiple habits and activities with a few simple gestures that feel natural right from the first launch. MOTIVATING PHOTO COVERS Choose a full-screen photo cover for each of your habits to motivate yourself and stimulate you visually to stay on track. Select from our ever-growing photo gallery or choose one of your own photos. CUSTOMIZATION WITH CARDS Today is the first habit tracker app that lets you build a fully customizable dashboard for each habit by combining cards that offer unique functionality: Apple Health Charts, Custom charts, Customer counters, To-do lists, Journal, Streak Calendar, Photo Galleries and more. Select those that best fit your habit and the way you want to track it. INSIGHTFUL STATISTICS & TRENDS You can manage what you can't measure. Get a clear overview of your check-ins and persistence across all your habits and activities from your profile in Today. Discover your weak spots to help you tweak and optimize your plan for maximum success. WIN BADGES AND AWARDS Developing a new habit or quitting a bad one is not just about checking a box every day. Today rewards with badges as you make progress to help you be more mindful of your journey and push you in the right direction. SECURE AUTOMATIC BACKUPS Your data is precious. Use Today's automatic backup feature to save all your data on your personal iCloud Drive or Dropbox folder for safekeeping and restore, if needed. PRIVACY Your privacy matters. Protect your all your habit data by using Today’s Touch ID or Face ID lock. For all devices that don’t support Touch ID or FaceID, we have enabled a 4-digit passcode. APPLE WATCH APP Today on the Apple Watch gives a quick and clear overview of all your check-ins due for today and check-in with a simple gesture. The Apple Watch complication will keep you up to the task and let you know when every single goal is complete. RICH NOTIFICATIONS & TODAY WIDGET Set up as many reminders as you need for each of your habits. Using Rich Notifications, each notification comes with a beautiful graphical representation of your progress and the option to check-in without leaving the app. Today Widget allows you to view and complete your tasks quickly. AND MORE Visit our website to learn about all of Today's features: htts://neybox.com/today/ Download Today and change your life today! PREMIUM FEATURES: (All of Today's features can be unlocked via a one-time in-app purchase.) - Custom photo covers and full access to all premium cover galleries - Add unlimited cards per habit - Access to premium cards - Track unlimited habits - Backup and restore all using iCloud Drive or Dropbox - Control access to your habits using FaceID, TouchID or a 4-digit passcode. 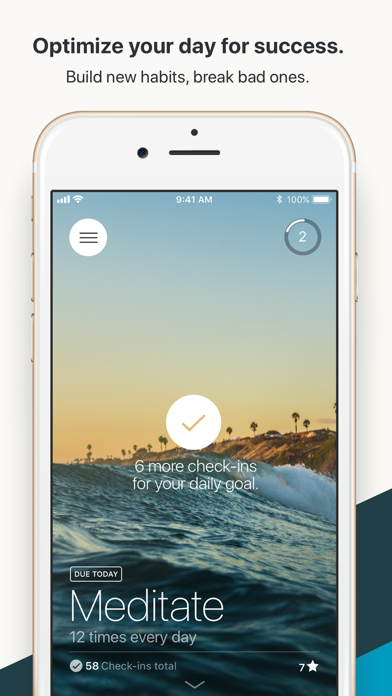 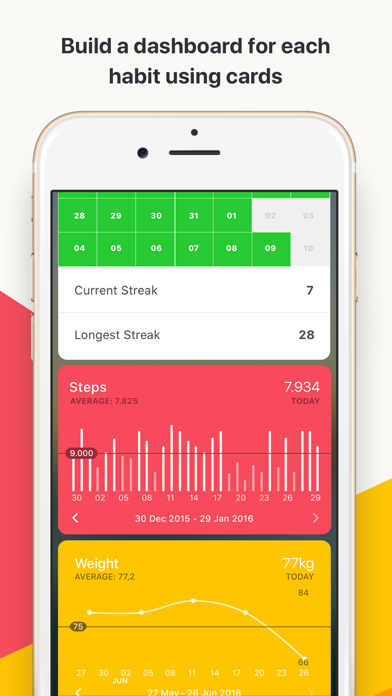 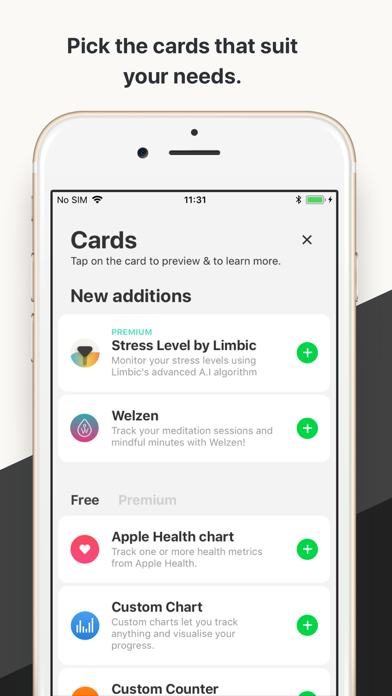 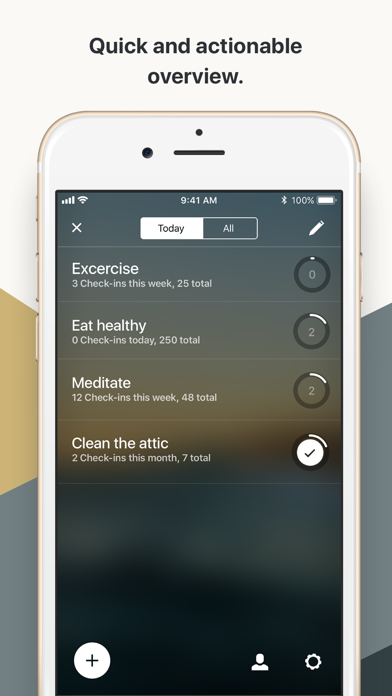 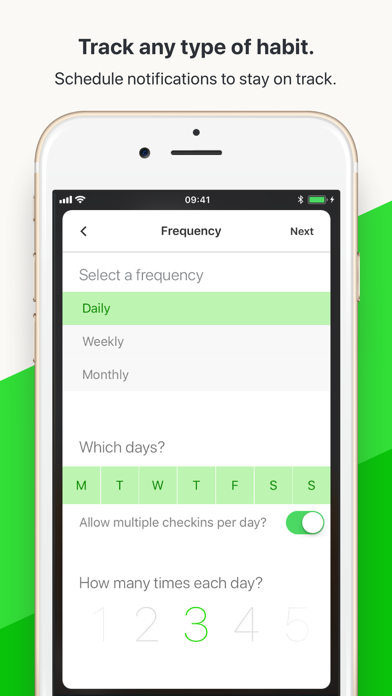 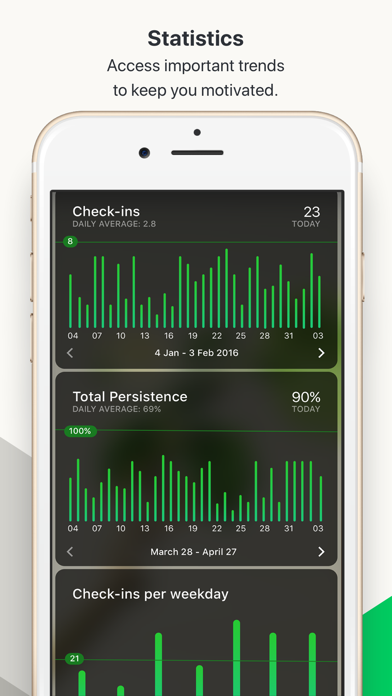 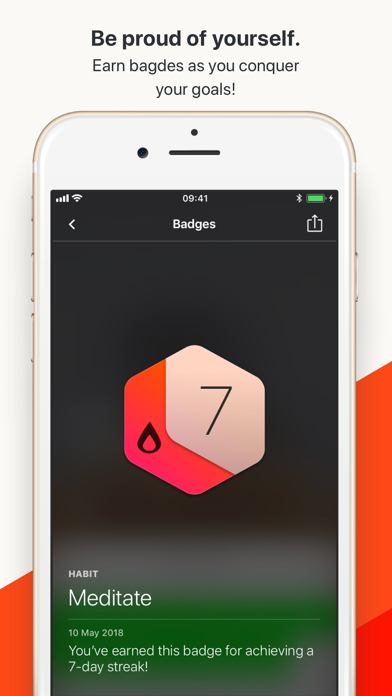 This is a great motivational app, only thing missing is widget support :(
By 909AL

I’ve been using this app for a few years now, I purchased the pro version just a few months after using the free one. The app is functional and very well designed, which is why I gave it three stars. But in the years since I bought the pro version, nothing much has changed with the app. The developers have promised for a while that new “cards” will be added to make tracking habits more intuitive, and I don’t believe any have. Also a lot of the features on the cards aren’t very useful. For most of them you have to input the data for all of them yourself. For example if you were tracking your weight, you couldn’t add a graph that would track your weight based on your Apple health data. You would have to manually add your weight every time you wanted to record it. Which isn’t that bad. But for an app that has a pro version boasting tons of features, it’s kinda lame realizing that most of them don’t really do anything. And there haven’t been any updates for new versions of iOS or anything like that. There’s not even an iPad version yet. The app itself is fine, but when I pay for a premium version of something I expect it to have something extra. A few years ago this was the best habit tracker app, but the others have surpassed it now since this one never changes.
By patrickb8man

I'm so grateful I found this app, it's helped me adjust to some pretty major life changes, and I use it daily, with my own backgrounds to keep me personally in the game. It was perfect. Was. But now we get widgets, not just locked to one page, and I NEED a Today widget on my health/goals page I need to have it there with my journal widget, and mood widget, and all the other widgets that hold my life together.
By Jaime221b

SUPER buggy, glitchy, and slow (despite updates). Not worth the $5 for the full app. Boooo 👎
By dvogtdnp

Are we getting an update?

I love this app. One of the best trackers that I’ve used. I’m wondering if there are any plans on giving us an update for iOS 14. Widgets, Shortcuts integration and new features in app. The Twitter account isn’t really active. The silence is a little concerning.
By Blu Psych

As long as you keep your phone with you, you will never forget an important task again. With the app you can set daily or weekly reminders that will notify you to do any chore at anytime of the day, and if you need to complete a task several times a day you can set it up to remind you multiple times a day. The app has beautiful backgrounds and a lovely font. Among other things, I use the app to make sure I drink enough water and stretch at particular times during the day, and water my plants when they need to be watered, since my memory isn’t what it used to be. The app is easy to use! And there is an easy to understand video tutorial that comes with it. Apparently, there are other things the app can do, but I haven’t gotten around to exploring them yet. Use the basic version for free or pay a small fee once for the upgrade. The app will back up your data in case you need to reinstall it, but this feature is probably only available with the upgrade. It was recommended by a teacher, and I am glad I tried it. Now it’s an essential part of my life.
By Bonn343

Why do I need multiple check ins, the calendar is useless
By jesusm1996

Use to love it

For some reason I have consistent issues with the connection from Apple Watch to the app. I’ll check in through Apple Watch, then when I check my phone no check ins have been recorded. It’s random. Works when it wants to
By Ldjsjmdkxjsn

The most annoying bug

Whenever I scroll up the screen to add says I missed but accomplished my goal, it freezes. No matter what. Without fail, it freezes. What’s the point of the app then?
By ButzaStellz

When you will support the new watch faces for series 4 &5?

When you will support the new watch faces for series 4 & 5?
By عبدالله أبوخزيم