Relive the excitement of Final Fantasy Adventure―a timeless classic remastered for a new generation. ■STORY Enshrined atop Mt. Illusia, high above the lofty clouds, stands the Tree of Mana. Drawing its life energy from the boundless celestial aether, the sentinel grows in silence. Legend holds that he who lays his hands upon its trunk will be granted power eternal―a power the Dark Lord of Glaive now seeks to further fuel his bloody quest for domination. Our unlikely hero is one of countless gladiators indentured to the Duchy of Glaive. Each day, he and his ill-fated companions are dragged from their cells and bade to fight exotic beasts for the amusement of the Dark Lord. If victorious, they are thrown back into the dungeons with just enough bread to tide them over until their next match. But a body can only take so much, and it is never long before the weary captives succumb to their cruel fates. ■SYSTEM Adventures of Mana's battle system grants you the freedom to move about the playing field without restriction, allowing for thrilling combat in which you decide when to attack and how to evade. ・Controls Player movement is achieved via a virtual joystick accessible anywhere on the screen. An auto-adjust feature has also been added so that even if your thumb strays from its original position, you will never lose control of the hero. ・Weapons Weapons are divided into six unique categories, some with uses beyond merely dealing damage. Determining when and where to equip each kind will prove the key to success on your quest. ・Magic From restoring lost HP or removing various ailments, to rendering foes incapacitated or dealing deadly blows, there are eight different spells for almost any occasion. ・Obstacles Bloodthirsty enemies are not the only things standing in the way of completing your quest. You will need both tools and your wits to overcome the many challenges encountered in the world of Mana, ranging from locked doors to hidden rooms to traps growing progressively more complex as the game progresses. 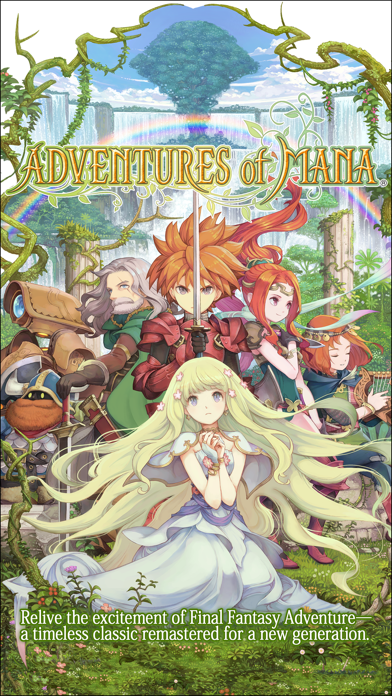 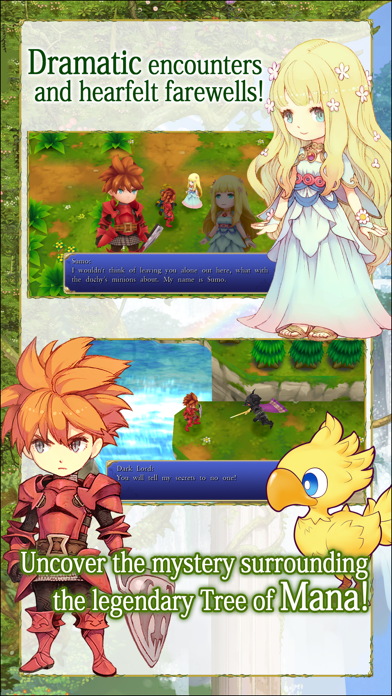 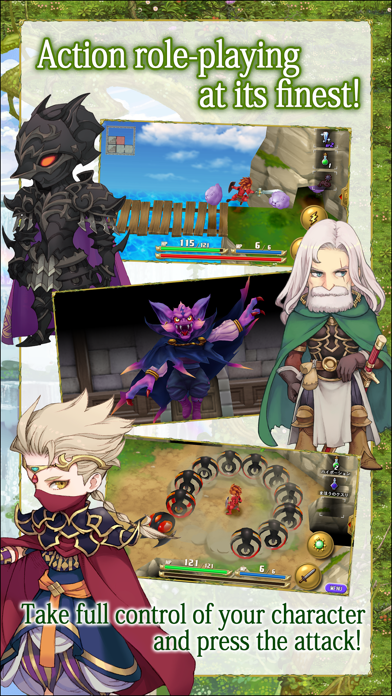 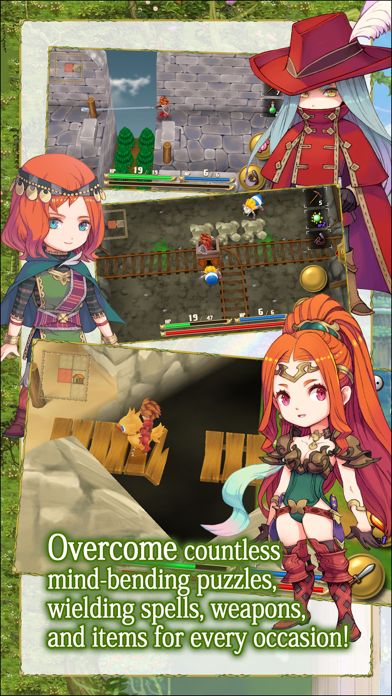 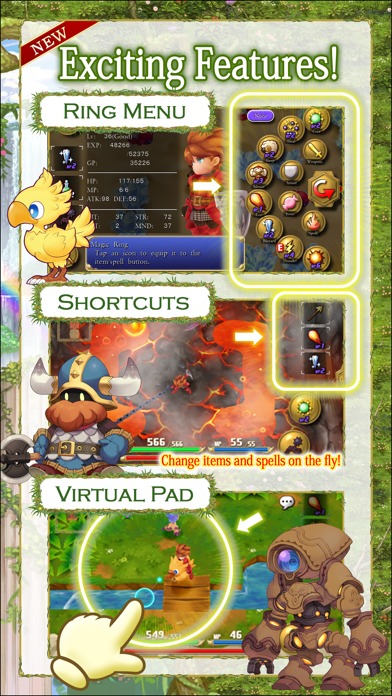 The perfect remake of a classic

The game excelled in soundtrack, plot, game mechanics and adorable cgi.
By mockingkjay

This is just a port of a PSP graphic update to a beloved game boy game that has aged very very poorly. While the polygonal 3-D graphics are snazzy, and the music as awesome as ever, the gameplay and storyline of this game were really never very engaging.....or fun to begin with. Control wise, if you have an MFI controller, then it plays perfectly but who cares when you’ll be endlessly grinding against flat uninteresting monsters in order to accomplish forgettable fetch quests thrown at you by cardboard characters in a mellow dramatic, convoluted “story” so contrived and so ham fisted that it makes daytime soap operas feel like Shakespeare by comparison? The game is riddled with game ending, unsolvable “puzzles” that involve doing asinine, ridiculously cryptic tasks like: walking around two trees in a the shape of a figure 8 until a secret door opens.....at some random, undisclosed place in the monotonous, one dimensional woods, that look like all the other woods. Without a walkthrough the game is virtually unbeatable. With the look and sound being as good as it is, if this game were a completely reimagined (True Remake) of Final Fantasy Adventure then I think they could justify the relatively steep price.... but as it is? This game is just not worth the money or the time. The original was considered good in its time, for a game boy game (that people couldn’t beat even back then) but by todays standards your better off playing so many other games.
By Jksoren82

One of the best on the market.

I loved this game back in the day. I found it on the App Store awhile back and have replayed it every few months or so. It is still continuously supported which is awesome. I really wish they would do a completely original sequel to this with these graphical updates.
By NickMeeker

A must have remaster

Incredible, I played the original on game boy. This remaster kept everything and made it better. They simply made the game 3D but everything else is the same. It's a rare gem and a must play game.
By Berserk lover

Before you buy this game. Be aware that the maps are redundant and confusing. The music is extremely redundant and just blah. The story is somewhere in there... and you will need to follow a walk through on YouTube before you can get any type of satisfaction from this game.
By O-SKI-D

Make sure you have enough keys... you can get trapped in the dungeons.
By Angry user man

Great remake of a classic

Beautiful remake. It brought 3D and expanded mechanics without ruining the original concept. Score by Kenji Ito is a joy to hear.
By Metachronism

Game suffered from redundancy and poorly designed maps.
By ThatGuy7778

One thing I was worried about were the controls and the first thing I noticed was that the controls controlled perfectly! Good graphics and fun game. They nailed it with this one!! If your lookin for a solid game to play here on iOS play this one it's far from disappointing.
By BossHaussguymanbrotha

Super cute and went perfectly with a bowl of honey nut feelios. Legend of Mana should be next on the remake list!!!
By FoxieFoxeh