Spoon, the audio streaming platform loved by 20 million people worldwide Communicate quickly and easily, and host your own broadcast! Chat in real-time with people who share your interests. Join for free and enjoy everyone in voice-only mode! Check out some of the Spoon’s cool features: Spoon is the next big thing in live streaming: audio-only. With Spoon you can voice chat, listen to/perform live music, and share your talent (or feelings)! Spoon connects you with a real audience by broadcasting only audio. Share the REAL you! It’s easy to find amazing content and talent similar to podcasts or radio. Support your favorite DJs directly through digital gifts and chats when they live stream. LIVE - Go LIVE and broadcast music, chat, sing, and make new friends. The possibilities as a DJ are endless! - Join a DJ’s stream with live messaging. Directly chat and support your favorite DJs with digital gifts – spoons. CAST - Forget expensive equipment – seamlessly record with your phone! Create recorded CASTs to share with fans and friends. - Listen to thousands of original CASTS with topics for just about everything – like a podcast, but better. TALK - Start a message thread that’s audio-only! Get advice, create challenges, and be weird. - Experience a whole new way to be creative – collab with new people. DISCOVER - Discover trending LIVEs, fan new DJs, and explore popular topics. - Be inspired and entertained by the next frontier of content creators! PROFILE - Goodbye DMs! Update your fans via notice board for chiller communication. - Discover your voice type – fans can categorize you as friendly, cute, cool, and more! COMMUNITY - Enter a safe space. Spoon prides itself on being a supportive platform with users that genuinely connect with one another. - Express yourself! Audio makes it easier to genuinely be yourself – escape the pressure of ‘image perfection.’ Spoon Official Website: https://www.spooncast.net/ Spoon Official YouTube: https://www.youtube.com/c/SpoonUSA Spoon Official Facebook: https://www.facebook.com/SpoonGlobal/ Spoon Official Instagram: https://www.instagram.com/spoon_usa/ In the Spoon app, “Profile> Menu> Contact Us> Contact Us” Customer Service Site https://spoon.zendesk.com/hc/en 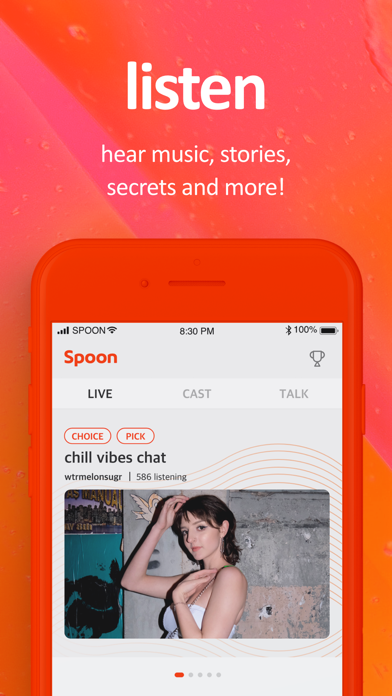 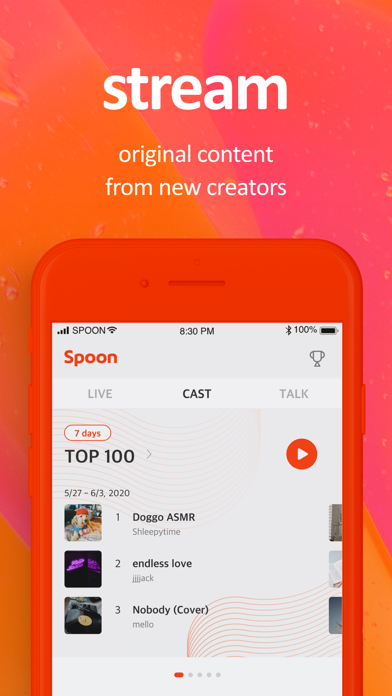 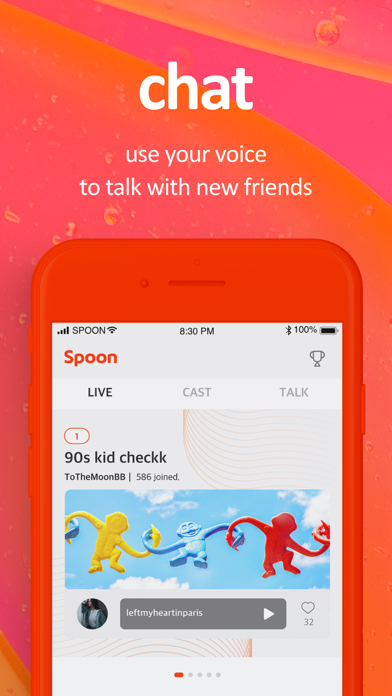 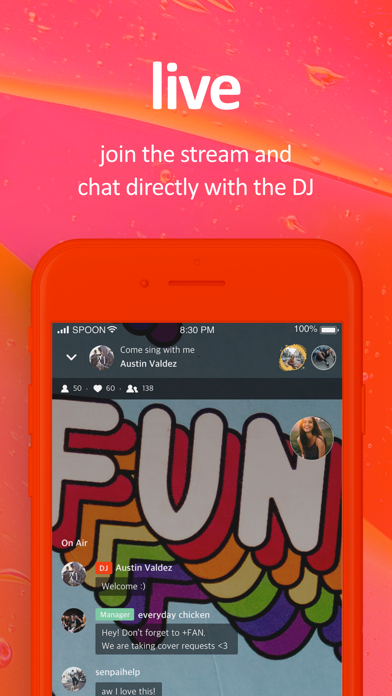 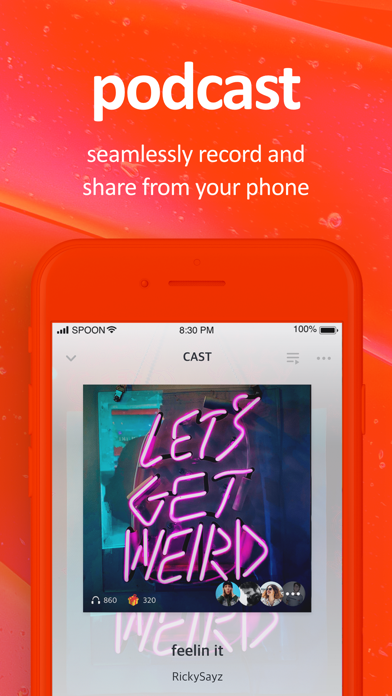 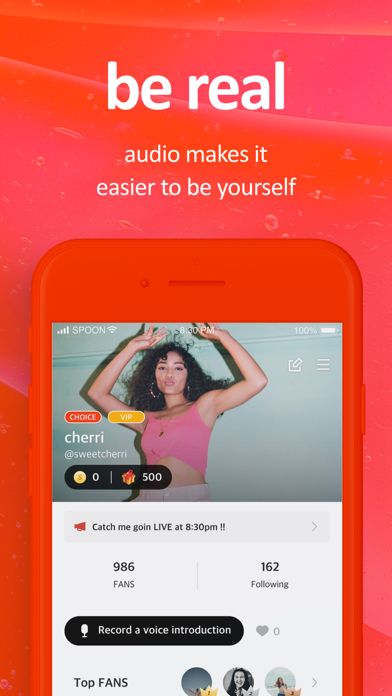 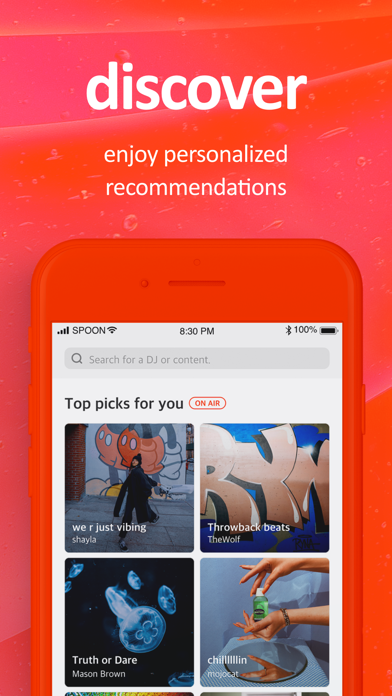 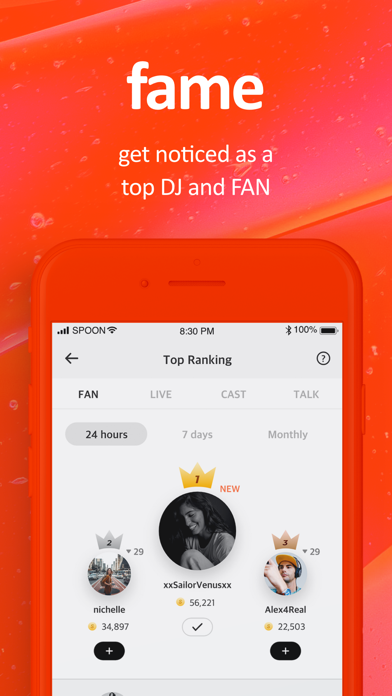 Much Yes. Such Wow.

I’ve been on plenty apps where you go live and whatnot. BUT none of them are even CLOSE to as awesome as Spoon. It’s all great people on here. I’ve never felt more at home than on this app. It’s a great way to bring people closer. 100/10 would recommend. I use Spoon almost daily now as an outlet and it’s improved my mood tenfold. Don’t use it as a dating app though. Use it to make friends and share your thoughts/talents with the world. 🤗🤗
By Big bad and ugly

Everyone can find a group on here! I’ve seen the most wholesome content here!
By snailir

In my overall opinion is , this is a good app but the banning and warning system is not great , for example if a streamer has a animated background it will be considered sexual? and gets warns? but when someone post their ass it’s not sexual? and they don’t get warn? that needs to be fixed! another thing is streamers get warns but viewers? we get banned without any warns and it’s not good , forever banned and device banned too? that’s not good. i was banned bc i used profanity and other people do too and we don’t get warns we just get banned! if we get banned just do the ban not the device locked! i was banned and i need explanation i dm on ig and i haven’t recieved a response, my ig is @endofjourney_
By FNBR- Cake

Fine for what it is

The app is fine for meeting people but i downloaded it because the whole advertising thing says it’s about djing and it’s really not at all. I joined because it looked like a cool place to spin some tracks and listen to actual djs but what the app calls djs is just people.
By w4terb0ttl3

I’ve been on spoon for almost 2-3 weeks and I’ve been loving it! Everyone on there is SUPER sweet and nice. And if you have it, fan boujee banana and shoya cause they are the best in my opinion. I give it a 10/10 it’s amazing. I recommend for all of you
By kaksixndhsnsklssbssj

Hi, is cursing not allowed? I’ve seen a lot of people doing it, and I assumed it was. I’ve heard streamers dropping the n bomb and f bomb. So why can they do it but not me? I didn’t mean to break any rules. Is it possible to get unbanned? Will update based on response.
By Gabri3lD4vis

I’ve had the Spoon Streaming app 5 weeks now and there hasn’t been a dull moment up to date. I love the community as a whole and love the friendly faces I meet there and the friendships I’ve made. I also LOVE streaming to an audience that has common interests, or even doesn’t! When I’m not streaming I love being manager or if I don’t want to I listen for HOURS! Best way to grow your platform have recommended to all of my friends! If you’d like go follow me @shaney2k!!!!
By The Major🙉

Great app! Recommend it to everyone! But "Spoon"? We need answers
By Hsjdkbrick