The most accurate professional-grade dictation service available on the market. Create templates, add custom words, and instantly dictate your documents – Dragon Anywhere will automatically adapt to how you speak. Download your one-week FREE TRIAL now! Trial converts to a monthly ($14.99) or annual ($149.99) subscription. WHY USE DRAGON ANYWHERE Paperwork doesn’t end when you’re away from your desk. Dragon Anywhere is the only mobile dictation app that enables continuous dictation of documents, with no length or time limits. This means, you can dictate documents of any length, edit, format, and share them directly from your mobile device—whether visiting clients, a job site or at your local coffee shop. Mobile employees are often burdened with heavier documentation demands—client intake forms, reports and more. Dragon Anywhere makes it easy to create detailed and accurate documents, fill out reports and forms, or complete other paperwork— directly on your smartphone and tablet, all on-the-go. And because you can also synchronize your personal customizations with Dragon Professional for the desktop, work started in the field or out on the road can easily be completed back at your home or office. DRAGON ANYWHERE FEATURES: • Fast & accurate dictation means you can dictate immediately with 99% recognition accuracy right out of the gate, with no training required. • No time or length limits means you can speak as long as you want to complete documents of any length – from a business report to an entire book! • Need to fill out forms from the road? Easily create form-based templates using Dragon Anywhere’s auto-texts feature and create and fill out forms, such as client in-take forms, and even navigate field to field by voice commands. • Powerful customizations, like the ability to add words specific to your industry, means even better dictation accuracy as you create documents. Or create simple voice commands to short-cut repetitive steps, like inserting an email signature or standard clauses into documents. • Robust voice formatting and editing lets you select words and sentences for editing, correction, and deletion, apply common formatting like underline and bold, or voice navigate through fields of a report template. • Need to share or work anywhere? Simply import and export to and from popular cloud-based document-sharing tools like Dropbox® and note-taking apps like Evernote®. • Synchronize with supported Dragon desktop solutions and work started on the road or in the field can be completed back at the desktop for seamless document workflows. Additional Information: • Dragon Anywhere supports the following languages: US English, Canadian English, UK English, French (Canada), French (France), and German. • Dragon Anywhere uses cloud-based speech recognition, and requires an internet connection to dictate. • For any technical or subscription assistance with Dragon Anywhere, please contact Nuance Support: https://www.nuance.com/dragon/support/dragon-anywhere-support.html Dragon Anywhere has your privacy in mind: • All communication with the cloud is secured with Enterprise grade encryption. • The app does not require access to your personal information, and only requires access to the device’s microphone and storage. Subscription details: • One-week free trial converts to Monthly subscription. Monthly ($14.99) subscription; Annual ($149.99) subscription. Subscriptions charged to your iTunes account. • Manage your subscription via iTunes Settings. • Subscriptions auto-renew at the end of term unless auto-renew is turned off 24-hours before the end of the current period. Privacy policy: https://www.nuance.com/dragon/producturl/en-us/dam/privacypolicy Terms of Service: https://www.nuance.com/dragon/producturl/en-us/dam/termsofservice 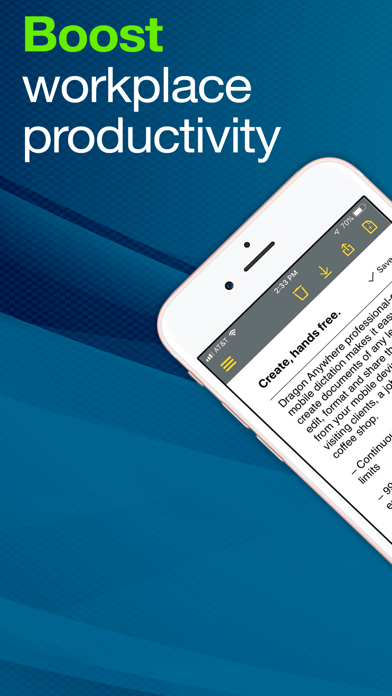 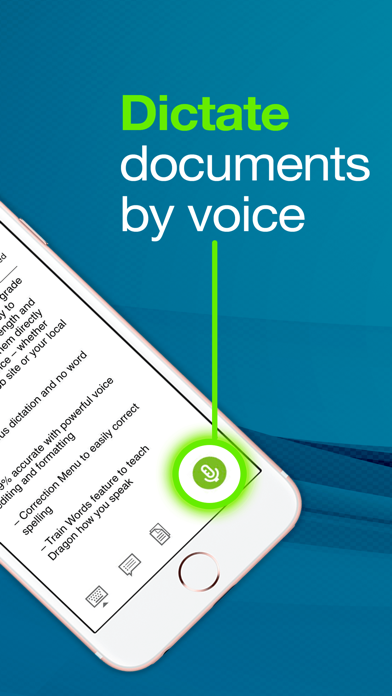 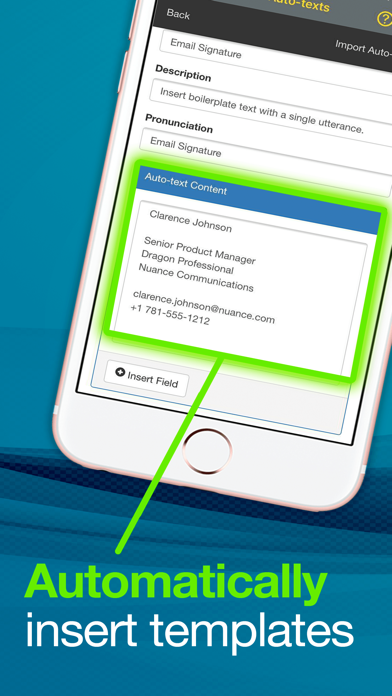 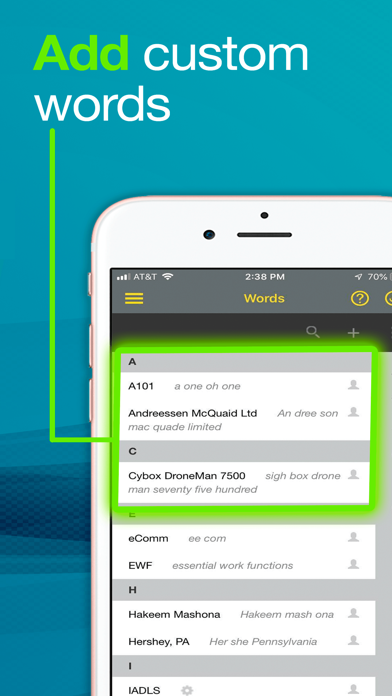 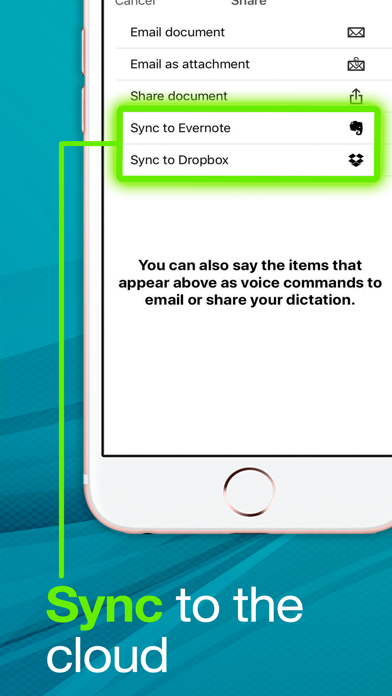 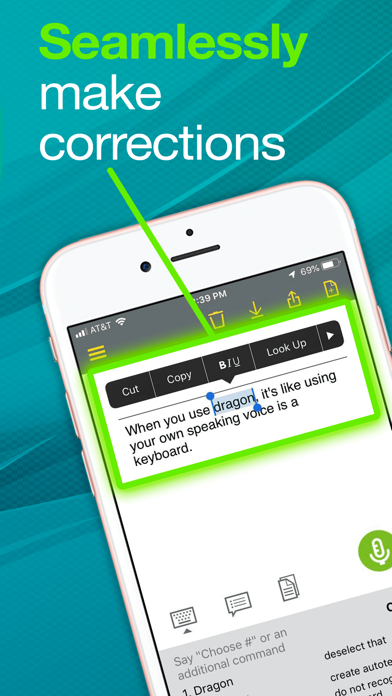 I won’t subscribe unless/until the bug with Dropbox is fixed. It expires every 4 hours. It’s a pain to unlink and re-link it. Also, there’s no syncing between my iPhone and iPad. It’s the same account.
By DonnaSueR

I think I paid for this app in full and should use the trial. I tried to speak a few times and it did not go well. I'm willing to give it a week if I can get my money back.
By nic0426

Was really hoping this would help me transcribe my professors lectures for school. I was using dictation on Microsoft word but it was sometimes a little off even though it did capture almost everything. Dragon didn’t even seem to capture anything at all. It constantly turned off and even if the mic icon stayed green it didn’t dictate anything at all. So disappointed.
By Korloneous

Update: Dragon still hasn’t fixed the “tab” bug!!!!!! Come on people this is basic UX… “Tab” is one of the command words, used to indent. When I say “tab, the program spells the word TAB. Language recognition 101: Bracket your meaning. Dragon, I’m a writer, hire me parenthesis I’m broke parenthesis. (Using “parentheses” above as an example of the software’s lack of adaptive language recognition.) —Miles Strucker Update/response to owner response: can reconfirm that saying “tab” spells tab, rather than creating an indent on a regular basis.
By The Adjunct

Not sure what has happened to the software since May, but now on my iPhone, when I tap the menu on the top left, the menu does not show up, many of the buttons disappear and the text makes an odd shift to the right. It all works ok in landscape though. I’ve updated software, deleted and reinstalled, etc. but there seems to be a glitch now. Not recommend until this glitch is fixed. I’ve used this app for over 6 years daily.
By djeeer

Dictation quality is great, but…

I really love the actual dictation part of this app, from the accuracy to how customizable it is. However, every single time I try to send my work to Dropbox, a message pops up saying that something went wrong and I have to go into settings, unlink from Dropbox, and then reconnect the app to dropbox, which requires signing in all over again. I also get a message telling me that sending it in email as an attachment or otherwise will not work and to check my email in settings, which I do every time and it is set up properly but it will not send. In other words, I can dictate all I want into this app but no export feature is working. I feel like I just threw $150 away. I will be calling support on Monday but I don’t have high hopes for a refund. As other reviews are saying, this app could be amazing but there are far too many glitches.
By Writer07

I use dragon all the time at the hospital. It’s amazing how accurate it is on things I can’t even pronounce properly. This app is terrible though. I tried to said NSAID and it transcribed to and she said. I was born in the US and English is my first language so pronunciation is not a problem. If this app can’t even get NSAID right you shouldn’t even have this on the Apple store.
By digistm

It would really be optimal if this software were available for users on M1 Macs also. I like to be productive using both my iPhone, iPad, and computer. This product really only works optimally on the phone. I would be interested in knowing if it will be optimized on the other Mac products if not I probably will plan on stopping my subscription.
By brikef

This app constantly crashes. It is also extremely difficult to cancel your subscription; it’s not as easy as cancelling in the iPhone subscription page. You have to call and then are given the run around by agents saying, “its taking too long for me to verify your original order. Avoid this app like the plague.
By StevieBStevie

This app wasted hours of my time

I used it trying to get it to work made a long document, talking for hours. Full of errors but sure okay if that wasn’t enough it wouldn’t even allow the doc to be shared outside the app. I’ve tried emailing 100 times, syncing with everything it recommends and nothing. Glitchy. Doesn’t work. Dangerous! As it wasted so much of my time that I missed my deadline. Absolutely no support and wayy overpriced for what it doesn’t even do. Can’t believe I almost bought their full product for PC
By kogsggdgvt