The eero app allows you to easily set up and manage your eero WiFi system (sold separately). The world’s first home WiFi system, eero blankets your home in fast, reliable WiFi. eero stays new and gets better with frequent software updates, improving performance, while also bringing new features and security improvements. It’s simple to setup and easy to manage. With a network that expands as far as you need, you’ll finally be able to stream, work, and play, from every corner of your home — and from the backyard, too. eero features: - Setup in under 10 minutes - Automatic updates with new features, performance improvements, and the latest security standards - View and manage your network from anywhere - Easily and securely share your network with guests - Schedule or pause internet access to manage screen time - Block devices from using your network - eero Secure - a subscription service that includes advanced security, additional parental controls, and VIP access to our team of WiFi experts We want to hear your feedback. For any feature requests or thoughts on how we can improve, reach out at support@eero.com. By using this app, you agree to eero’s Terms of Service (https://eero.com/legal/tos) and Privacy Policy (https://eero.com/legal/privacy). 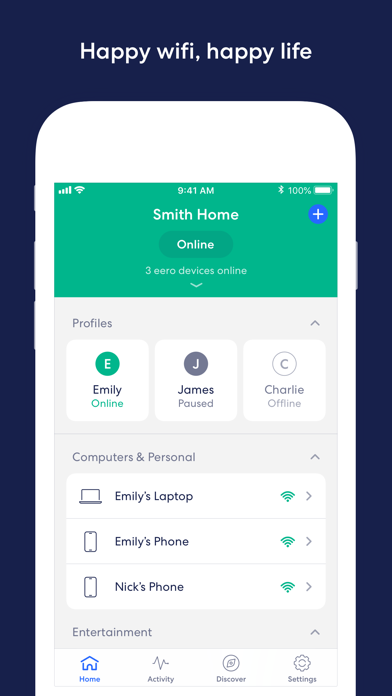 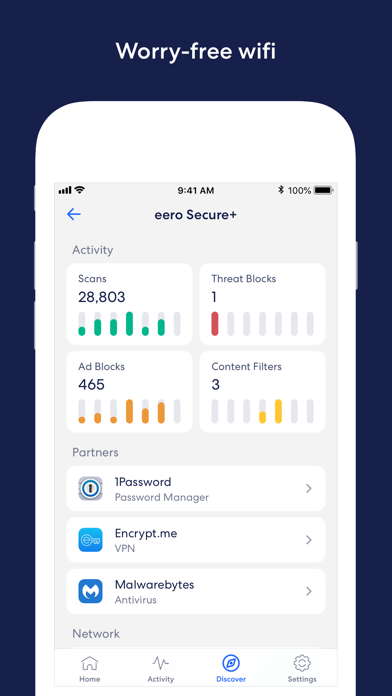 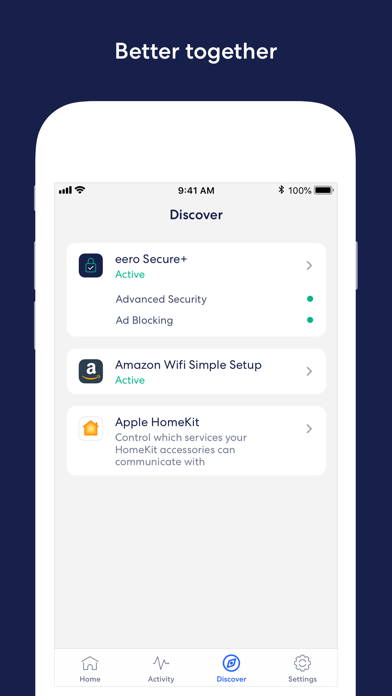 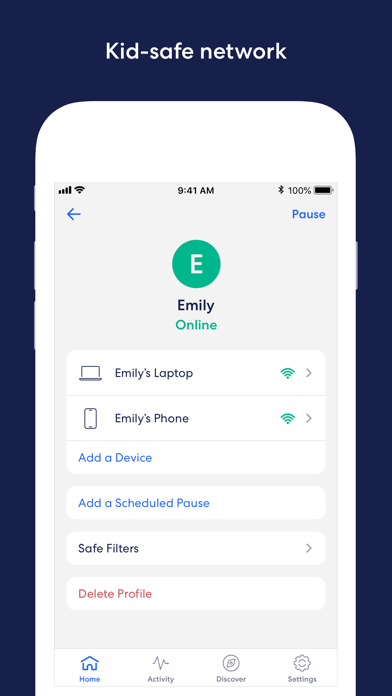 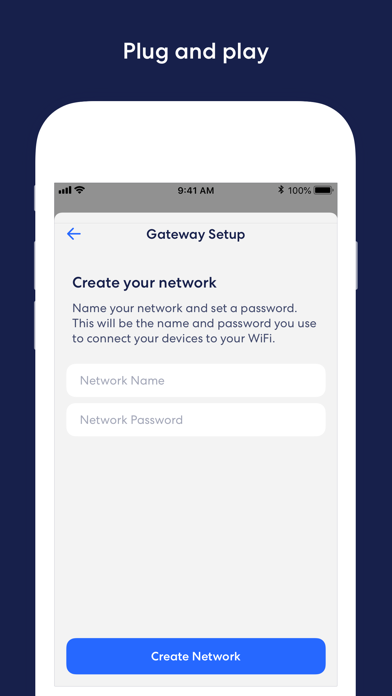 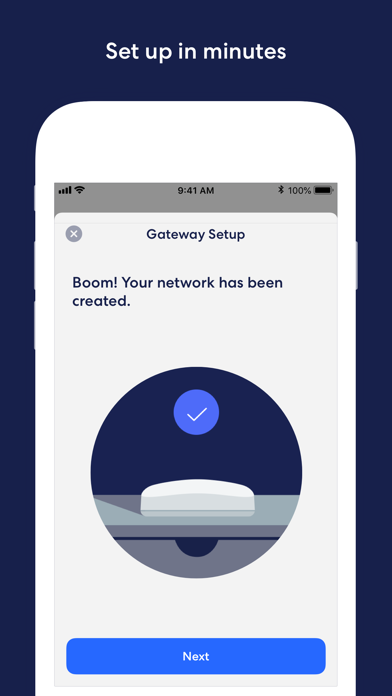 1️⃣We have had Eero Pros for a little over 3 years now. They were relatively easy to install and have served the purpose they were intended for. Customer service was decent when there was an issue. Since we are not trying to do anything fancy with them we would not have encountered some of the issues others had. 'The App' is easy for a novice to use but overly simplistic for geeks. 〰️〰️〰️〰️〰️〰️〰️〰️〰️〰️〰️〰️〰️〰️2️⃣However, the move to change their 2 tiered plan to only the high plan was greatly unappreciated on our end. We had the bottom tier and it supplemented other plans we had like RoboForm and Webroot. I would not mind the increased price if all the upper plans they had were decent but they're not. 1Password is a good password manager but it's GUI for IOS basically stinks. Malwarebytes antivirus is not anywhere near as robust/protective as higher end security suites so one would be foolish to trust it by itself. And you can't run Webroot and it together at the same time on a PC so that it's dead in the water. Encrypt.me which is now StrongVPN rates a 3 out of 5 on PC magazine. Neither company has done revisions to it's IOS app in the past year and 1 star reviews during that period are plentiful. That's not a resounding vote of confidence. It's not a good deal if these services do not provide GOOD service. The idea of a combined group of services, like EERO plus, under one plan would be helpful if they were not standalone which injects complexity into a product that advertises simplicity. 〰️〰️〰️3️⃣And then there are the ratings for this App which stick out like a sore thumb. Some of them are tied to hardware but you really have to do something terribly wrong to get to a 2.8. 〰️〰️4️⃣Routers, by nature, are notorious for disappointing customers because of the tech involved and the myriad of situations where they perform poorly. When they work, as expected, it feels like witchcraft. When they don't, it's a train wreck for residential customers and small businesses. Apps can only be as good as the servers they connect to and the codes that make the bridge. There have been a lot of revisions to this one but I suspect that's just trying to navigate IOS 16. Maybe if Apple would 'give it a rest', on having a new IOS every year, app designers might stand a chance of stabilizing their products. I don't need new features when the price paid is eternal bugs.
By GrannyDar

Every update “improvement” is 5 steps backwards. Managing multiple networks used to be very easy and now is a complete nightmare. It’s just awful
By KeithBragg

Look elsewhere. App and hardware are both junk.
By Kevin Weaver

App doesn’t work with eero that is already set up for years.

Have had the eero set up for many years and works great. As for the app I decided to add today but nowhere can you add to existing eero that’s already setup. The app wants me to set it up in order to even see anything on it. Useless for those who already are set up since can’t get past the set up page at all
By krystlerose

So I really do enjoy my eero, it’s increased my max speed significantly from an old Netgear Nighthawk router. However, the app does have its annoying quirks. Even with “Optimize Gaming & Conferencing” turned on, my Xbox Series S is usually limited to the 2.4gHz network. This is obviously not nearly enough speed to play AAA title multiplayer games. Please, please, please just add a button to force 5gHz on a certain device permanently. It’s so frustrating that I have bought a 50ft cat5e cable to hardwire it. If you search online, you will see tons of posts of people having the same issues with Xbox consoles dating pretty far back so I don’t anticipate this ever being added in or fixed. Oddly enough, my Xbox One S, which only use streaming apps on and do no bandwidth intensive gaming on, is always connected to 5gHz when I check. Very frustrating. Other than that, I do like the app and the accompanying product. App is updated often which is nice to see, as well as being able to use beta features, if you want, like the one mentioned above. Overall, happy customer and will keep using the app and product.
By runningrinke

only ONE ssid for all 3 bands

My wifi6e deviceS most of the time connected to wifi6 5ghz instead of wifi6e 6ghz. why am I wasting money on wifi6e router then? i am returning this and get another brand wifi6e router.
By kenl12131212

Not worth your time

After wasting 20 minutes trying to setup, I’m returning this and buying a tp link. Eero’s website isn’t working, can’t even submit a support ticket.
By waderironman

We have enjoyed 3 eero systems over the years and just upgraded again. It provides whole home coverage for 2 stories and 4300 sq ft. We love the Eero Secure bundle and we use several of its features.
By Chiefcrapofficer

I love the units and the app. One thing, though. Instead of at each update you putting “ UI polish and bug fixes”, you actually tell us what bugs you fixed?? This would be VERY helpful to those who have bugs. In all the updates you’ve posted, not one tells us what exactly has been fixed. You obviously know what bugs you fixed…so, why keep it a secret?
By Sabarrett

I researched WiFi enhancers before buying eero. It clearly was advertised as enhancing my WiFi signal. I had to spend additional money to hire an installer. My signal is no better now than before. One of your techs told me that he didn’t think eero would produce the results I am looking to achieve. I’ve spent $350.
By nedpen