FROM THE MAKERS OF AWARD-WINNING HITMAN GO AND LARA CROFT GO COMES A NEW ADVENTURE Deus Ex GO is a turn-based puzzle stealth game set in a beautiful dystopian future. Take control of secret agent Adam Jensen and solve brain teasing, grid-based puzzles to infiltrate enemy lairs and unravel a perplexing new mystery. Sneak, hack and fight past enemies, and augment Adam with futuristic upgrades. NEW - Expand your adventure with infinite brain-teasing content and new modes! • Create and share your own challenges in the elegant Puzzle Maker • Play community levels curated by your play data • Experience infinite brain-teasing challenges in Infinite Play Deus Ex GO features: • An engrossing story with over 50 challenging puzzles • Special events with daily challenge levels • Unique hacking powers – Take over enemy turrets or change the layout of the level itself • Augmented puzzles – Solve puzzles using Adam’s iconic augmentations • Intelligent new enemies including guards, turrets, drones, walkers and more • An intricate and mysterious storyline set in a beautiful vision of the future Following Hitman GO & Apple’s iPhone Game of the Year 2015, Lara Croft GO, Square Enix Montréal brings yet another beloved franchise to mobile with this unique take on this near future dystopian world. Can you solve the mystery? Take control of Adam Jensen and watch the puzzle unravel! Please note: Deus Ex GO is not compatible with the iPhone 4. 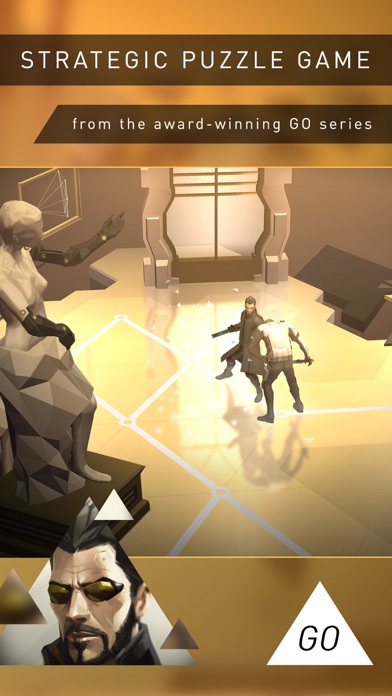 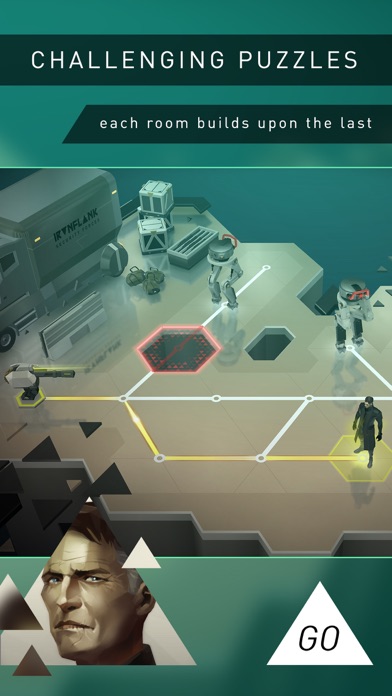 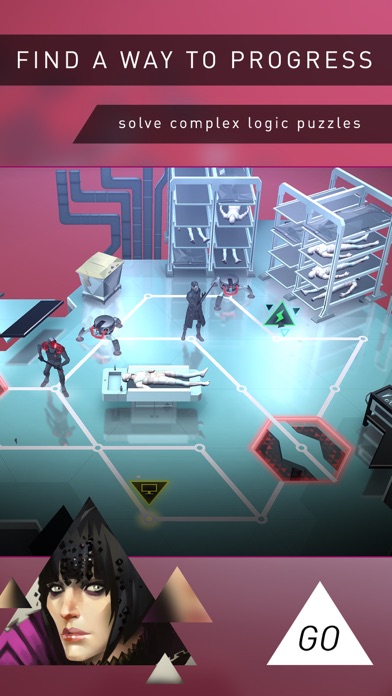 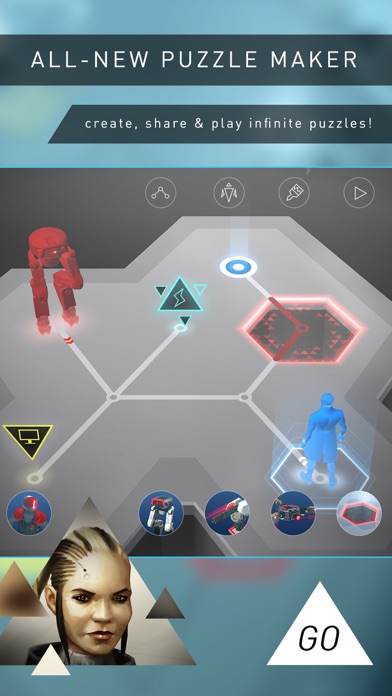 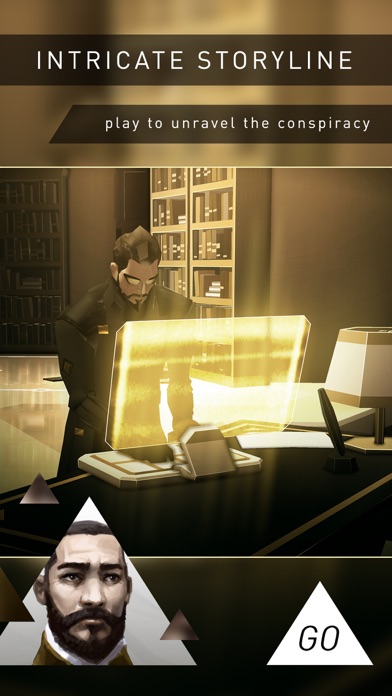 Not working on iphone x ...

Not working turns off on mission 2 at the beginning ....
By Tbiliselijigary

So they don’t mention you have to buy undos till you run out of them. I was just messing around with the game , seeing how the game mechanics work and by the third level it says I can buy undos! That is like a core gameplay mechanic. Imagine playing a Mario game and it says you ran out of jumps, would you like to buy some more. Ughh I hate this crap developers try to pull. It is getting deleted right away
By kingrottenboy

The puzzles are fun and challenging but not too challenging, and I like that there’s also a story to accompany the game. My only complaint would be that at level 34, the music becomes really awesome and dramatic, making you feel like you’re on the verge of something big, but then that music just keeps on playing for the rest of the game and then that music just becomes boring. That is a small complaint, though.
By richard1839031579

Recently, the game keeps crashing even before I make a move. I have reset my iPhone and tried to play the game again with the same result. My model is iPhone XS Max. Normally, it’s an excellent game worth five stars. Recently, though with the crashes, it is unplayable. The issue appears to be fixed. Revising rating back to five stars.
By AZRed89

One of the fewest that I really enjoyed ♥️

I enjoyed playing this game and got addicted 😅. Please is there’s another version or something. What made this game very enjoyable that it has no ads at all!!! You can enjoy playing the full game without any distractions. They have reached a professional level and they deserve to be the best in the area. Keep going guys. I support you to the end.
By لو فيه الدوري الاوربي بسس !

This game is fantastic! It has great puzzles to tinker around with! Additionally, it also has an interesting story to it. I’d recommend this to anyone that’s thinking about picking it up.
By Tsuki Land

In order: Tomb Raider: Go, Most Challenging and Graphical Deus Ex: Go, Graphical, less of challenge has story Hitman:Go, Kind of dull, a bit stiff, not much story.
By boe_dye

Seems buggy and crashes a lot. It’s also asking for payment to undo steps. Without that, gameplay is cumbersome. It’s also impossible to reset progress - doesn’t show up in iCloud manage data. No thanks.
By 2man73

Better than Hitman Go, Not as good as Laura Croft Go

I played Laura Croft first, it was an engaging puzzler. Challenging but solvable. I was looking forward to the other games in the family. After several chapters in Hitman I had no challenge, so I dropped it. Deus ex is acceptably puzzling, but does not match Laura Croft for complexity and challenge. If you’ve not yet played Laura Croft than choose it over this one, if you are looking for something to do after LC than this should do.
By NH Alan

I honestly did not think I’d like this. I’m a huge fan of the core games and was worried square was trying to make a quick buck. It’s a lot of fun feels simple but complex and so far feels very Deus Ex. Just to show my appreciation since I got this for free I’ll go pay for hitman go.
By Nechandi